It’s Facebook F8 and while CEO Mark Zuckerberg mounts a charm offensive about the future being private (it was before you came along, mate), the company is also showing off a redesigned core application.

The social network is revamping the experience around the events and groups sections of the app, signalling a major departure away from the trusty news feed, which has underpinned the app since its inception.

In a blog post published during the annual conference, Facebook says the redesign is putting communities at the centre of the overall experience. When users open the app they’ll see the groups page in the middle along with tabs for home, videos and notifications.

The update is rolling out to all users on iOS and Android from today and will preface a like-minded reimagining on desktop later this year. As you can see from a screenshot below, there’s much less of the company’s trademark blue.

It writes: “There are tens of millions of active groups on Facebook. When people find the right one, it often becomes the most meaningful part of how they use Facebook. And today, more than 400 million people on Facebook belong to a group that they find meaningful.

“With this in mind, we’re rolling out a fresh new design for Facebook that’s simpler and puts your communities at the center. We’re also introducing new tools that will help make it easier for you to discover and engage with groups of people who share your interests.” 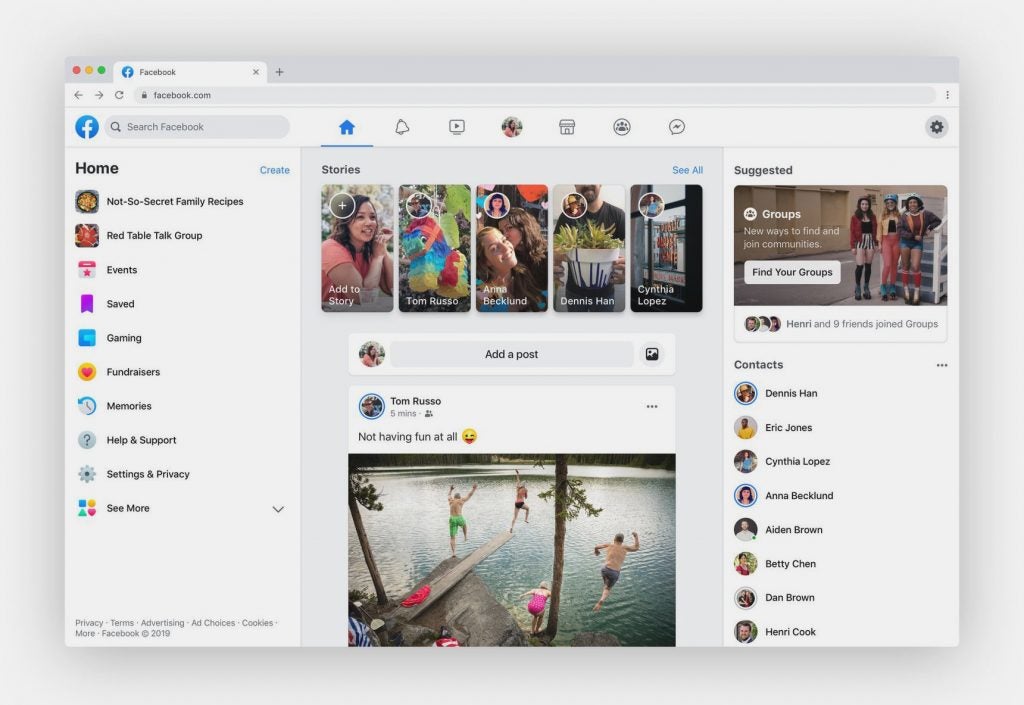 Facebook is also adding a new feature called Meet My Friends, which is designed to connect them with global users who share interests or connections. This too will be integrated into the new Groups tab.

As for Events, the company wants to help you find something to do in your locale. There’s a better map showing what’s going on in your neigbourhood if you’ve expressed interest in them. There are also revamped jobs boards for those looking for work in their area.

The changes come as Zuckerberg vowed to transform Facebook into a service less focused on looking in on updates from people who know, but more on smaller, private interactions with people pertaining to things you’re interested in.

Are Facebook’s changes in line with how you’re using the app these days? Drop us a line @TrustedReviews on Twitter.