The Apple Store on Regent Street, London has been closed to the public since June this year. But on Saturday, October 15, its doors will open once again, revealing a brand new design – and we’ve already taken a sneak peak at what it looks like.

Regent Street was Apple’s first ever store in Europe, opening 12 years ago. Since then, Apple has served over 60 million customers on the site, marking it as one of the company’s most prized and lucrative retail sites. That’s why it’s no surprise that the Regent Street store is the first Apple Store in Europe to roll out the company’s new retail design concept, which first debuted in the states earlier this year.

The Regent Street store will re-open on Saturday, October 15, at 10am, boasting entirely new areas that include the tree-lined ‘Avenue’, a hands-on ‘Boardroom’, and a ‘Forum’ space that seats 75 people. The Forum is home to a new (and giant) TV screen, which will be used to promote and feature new store programming under the ‘Today at Apple’ brand. If you’re interest, you’ll be able to find events at the store using the Apple website. 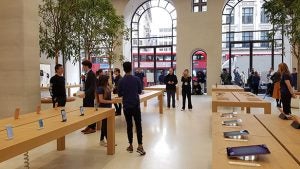 The new store was designed in partnership with Foster + Partners, a prestigious London-based architecture and design firm that has offices around the world. Here’s an excerpt from the company’s website:

“Over the past four decades, the practice has pioneered a sustainable approach to architecture through a strikingly wide range of work, from urban masterplans, public infrastructure, airports, civic and cultural buildings, offices, and workplaces, to private houses and product design.”

Apple design chief Sir Jony Ive, along with Angela Ahrendts, Apple’s VP of Retail and Online Stores, also helped create the redesigned store, which was based on the new retail design concept that debuted in Apple’s San Francisco store in May this year. According to Ive, Apple has tried to give the new Regent Street store its own unique feel. Speaking to Wallpaper* last month, he said:

“Like many great cities, London’s historic architecture has great significance to the community. On Regent Street, we preserved the incredible exterior façade while opening up the interior of the store to enhance the transparency and flood the space with natural light. By choosing materials sympathetic to the historic nature of the building, we’re able to modernise the space while remaining authentic to its surrounds.” 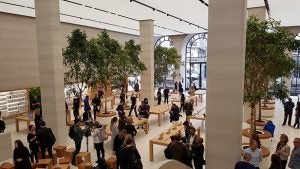 Speaking to press at today’s briefing, Ahrendts said: “I know how iconic and important Regent Street is, not just to London and the UK, but on the global stage, it’s one of the most important streets in the world.”

She added that a new staff position would be opened up at the Apple Store on Regent Street called Creative Pro: “We’re also announcing a new position…experts, pros, if you will, on photography, on gaming, on music – that position is called Creative Pro. We also have Geniuses…we now have a Creative Pro to answer any question you might have on our software and services.” 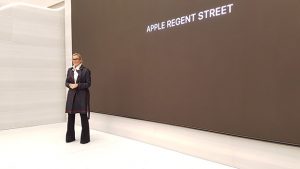 Angela Ahrendts speaking to press at the Regent Store re-opening

Wendy Beckman, Apple’s Senior Marketing Director for Europe, was also on-hand to talk about the new changes: “For those of you that can remember, Regent Street looked quite different in 2004 when we opened up our doors. We were really excited to introduce the iMac G5 and iPod Photo.”

She continued: “Today marks a new day for Apple Regent Street. The avenues when you walk in, they’re inspired by our boulevard and windows. You can sit underneath the trees; it’s a really calming environment. It really blurs the line between inside and outside.”

Beckman also confirmed a major change for the Apple store: the products will be untethered for the first time: “You can pick them up, you can discover, put them in your pocket.” 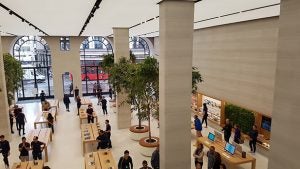 Apple’s Regent Street store had just 100 employees when it first opened, but now employs 510 staff – 26 of whom have been there since the very beginning. The workforce now spans over 20 nationalities, with staffers speaking more than 30 languages collectively.

Check out more images below: 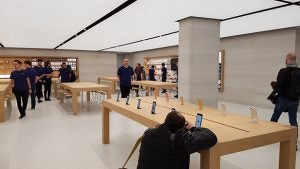 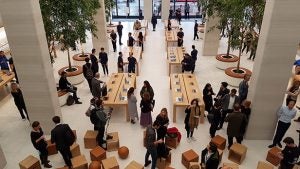 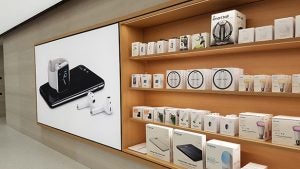 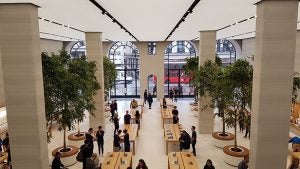 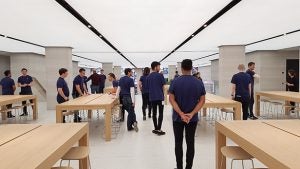 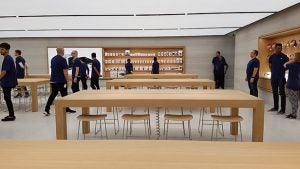 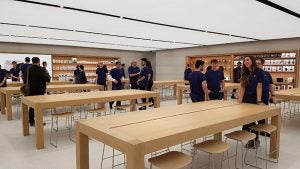 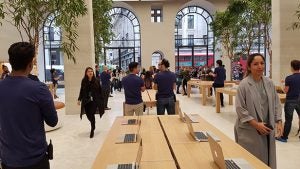 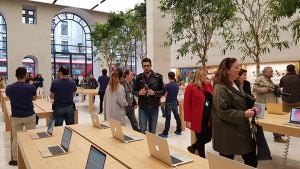 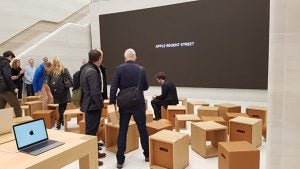 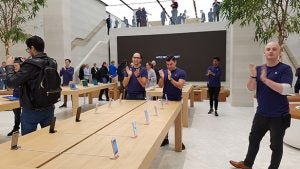 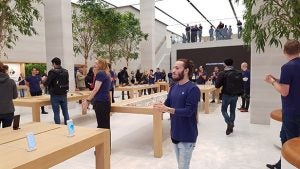 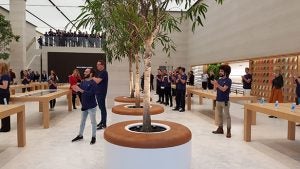 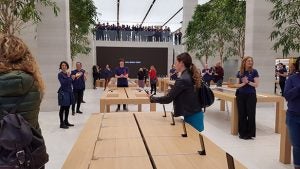 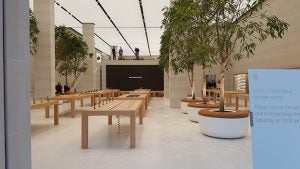 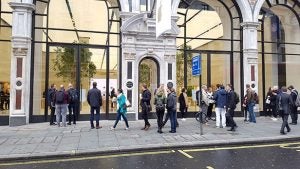 What do you think of Apple’s new store? Let us know in the comments.