Apple is notifying macOS users that 32-bit apps will not necessarily be supported in future software upgrades, with the company saying that macOS High Sierra represents the last macOS that will support older software “without compromise”.

While Apple has stopped short of confirming a cut-off date for 32-bit app support, macOS users will be served with the following one-off warning when they open apps that are built on 32-bit technology.

Apple has even set-up a support page dedicated to 32-bit app compatibility, writing:

“The technologies that define today’s Mac experience—such as Metal graphics acceleration—work only with 64-bit apps. To ensure that the apps you purchase are as advanced as the Mac you run them on, all future Mac software will eventually be required to be 64-bit.”

The operative word here is ‘eventually’. If you do have a slew of 32-bit apps on your machine, you needn’t panic just yet. We’ll learn more about the next version of macOS and 64-bit transition process at WWDC 2018 – the 32-bit app phase out was actually first announced at last year’s WWDC – and Apple’s next desktop operating system likely won’t be release in full until the autumn.

This means developers have plenty of time to update their apps to Apple’s 64-bit requirement, but even in the next macOS, we’d expect 32-bit apps to run – just maybe not as well as their 64-bit brethren.

Apple says that concerned macOS users should contact developers of any apps they discover are still running on 32-bit and encourage them to make the leap. There are a number of ways to do this, the simplest probably being simply to Google: “[App name] contact”.

Are my Mac apps 32-bit or 64-bit? How to check your macOS app compatibility

While important to note, in all likelihood this won’t affect most macOS users a great deal. I did a quick system check of my MacBook and, even though I’m sitting here rotting on OS X Yosemite, most of my apps are already 64-bit – though there are exceptions, as you’ll see in a second.

To find out which of your apps need to jump to 64-bit technology in the next year or so, simply navigate to ‘About This Mac’ by clicking the little Apple icon in the top left-hand corner of your screen.

Click ‘About This Mac’, then hit the ‘System Report’ button just under your device’s serial number. Then, on the left side-bar, scroll down to ‘Software’ and find ‘Applications’. Click it and you’ll be shown a full list of all the apps on your machine.

As the screenshot below shows, the far-right (yuck) column tells you whether or not a specific app is ready for Apple’s 64-bit revolution – in my case, I can see that uTorrent has a bit of work to do (and you can see that I went to Vietnam on holiday two years ago). 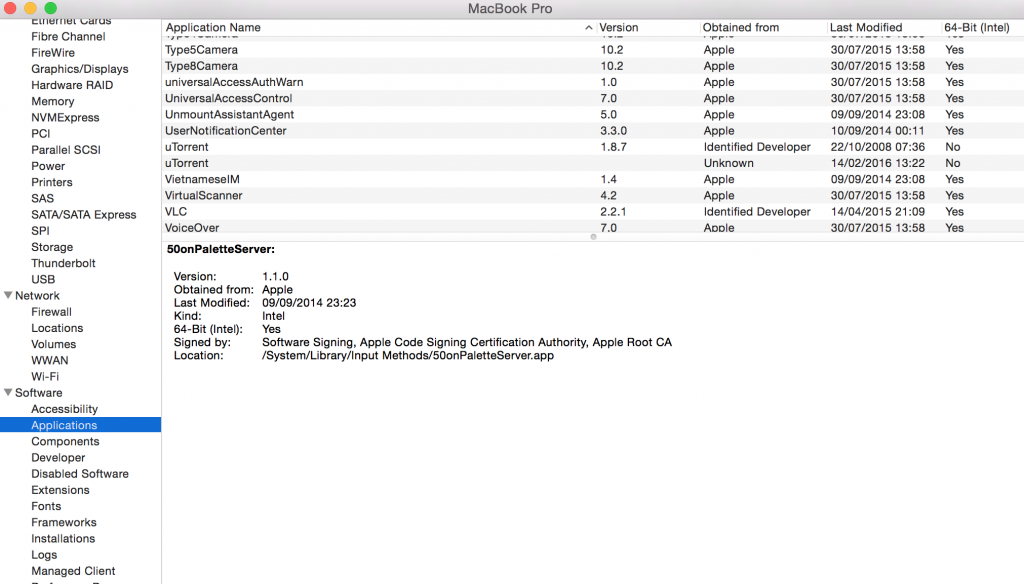 Those are all the steps you can take right now, but we’ll be sure to update this page with any new information as and when it becomes available.

In the meantime, let us know if you have any questions about Mac app compatibility by tweeting us @TrustedReviews.