Apple has announced a new Mac mini, which has been refreshed with the brand new Apple Silicon processor.

The Mac mini was already a powerful computer in a compact package. Now it’s even faster thanks to the new M1 chip.

The M1 packs an 8-core CPU for up to three times faster performance than the last generation of the mini. Meanwhile, the 8-core GPU delivers a huge 6 times increase in graphics performance, which Apple says allows the mini to tackle high performance tasks, such as 3D rendering, without breaking a sweat.

The design hasn’t been altered with this new refresh, but it didn’t arguably need a makeover.

Keep reading for everything we know on the new Mac mini.

The new Mac mini is set to launch next week on 17 November, along with the refreshed MacBook Air and 13-inch MacBook Pro.

The Mac mini is available to pre-order right now, so head over to the Apple store to bag yourself the tiny desktop computer.

The slightly more expensive £899 model features the same M1 processor, but doubles the storage to 512GB.

A high-end Intel configuration is also still available to purchase for £1099, although this will likely be replaced with an ‘M2’ model in 2021. 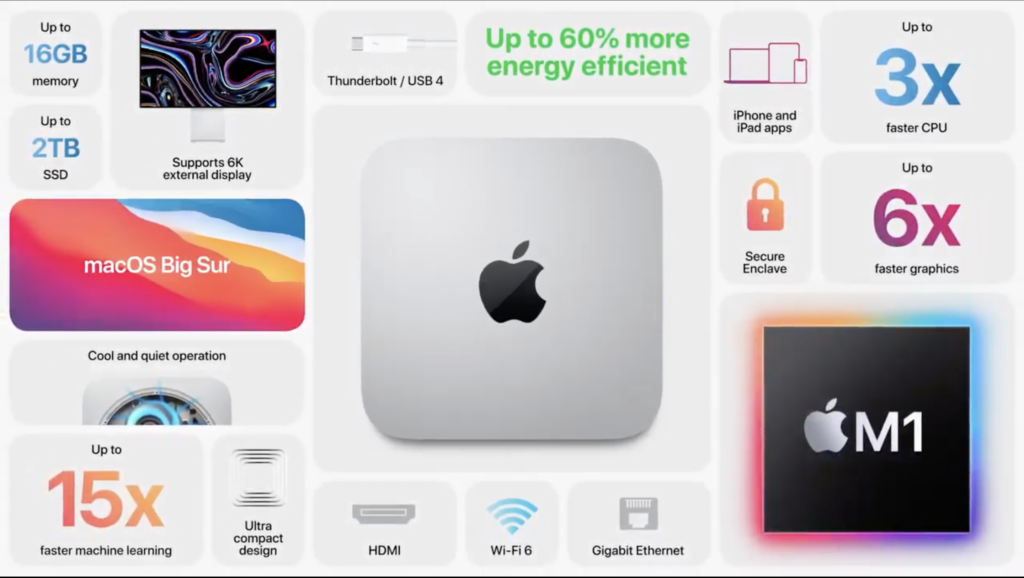 The only major upgrade for the new Mac mini is the introduction of the Apple Silicon M1 processor. However, if Apple is to be believed, this 8-core CPU provides a 3x faster performance to the preceding Intel model. That’s a significant performance boost, which should speed up the likes of web browsing, multitasking and opening apps.

Apple also claims the new 8-core GPU is a massive improvement on Intel’s offering, with a claimed 6x increase in graphics performance. The neural engine also allows for up to 15 times faster performance in machine learning over the previous generation. In fact, the list of improvements over the last Mac mini include three times faster performance in Xcode, four times higher frame rates in graphics-intensive games, six times faster rendering in Final Cut Pro and three times as many real-time plug-ins in Logic Pro, to name a few.

The computer features an advanced thermal design, which allows it to stay cool and quiet, and its two USB-C ports support both Thunderbolt and USB 4 so you can connect a range of peripherals including Apple’s 6K Pro Display XDR. The mini also supports Wi-Fi 6 for faster connectivity and the Secure Enclave in the M1 allows for best-in-class security.

For more details on the new Mac mini, be sure to keep checking Trusted Reviews for our upcoming review.