Google has announced Android TV, a brand new smart TV platform that will be introduced to TVs, set top boxes and streaming boxes in the future.

Announced during the Google I/O keynote, the new TV system will be introduced later this year and shows Google’s increased focus on TVs following the success of Chromecast.

Basically, there’s now one Android SDK for all form factors, which will let developers create apps for phones, tablets and TVs in one go.

To use Android TV, all you’ll need is a remote control with a D-Pad and voice input. This can be done in hardware, like a traditional remote or game console controller, or with software.

There’s a special Android TV app for your phone and tablet, plus you can use your Android Wear smartwatch as a remote control as well.

The actual Android TV UI looks and feels like any other, but has been designed with the Android L material-theme to be a “super-simple, lean-back experience”. 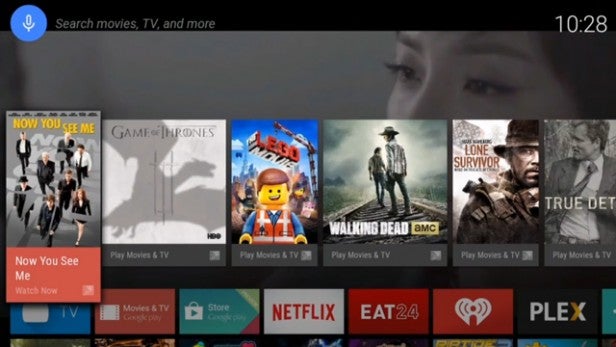 Pressing the home button offers you the Android TV UI over the top of the already playing content. First up, you’ll get content recommendations that are tailored to your viewing and playing habits, but can be pulled from any app source.

You’ll also get apps and games too, in the lower menus, all sorted by your recently accessed or viewed content.

To quickly find new or familiar content, the Google Search voice commands have been integrated as the core search functionality into the UI.

For example, searching for Breaking Bad with a voice command brings up the option to watch the series on Google Play or other streaming services. But you’ll also get wikipedia entries for cast members, related searches and YouTube clips.

If you select a cast member, they will become the centre of your search, with the related content tied to that person, including their other work.

Beyond TV series and films, voice search can also be very specific, like asking for “Oscar nominated movies for 2002” or asking questions like “Who plays Katniss in The Hunger Games?”

The Google Play store has also been tailored to the biggest screen in your home, and aims to offer “fluid cinematic 10-foot experiences”. 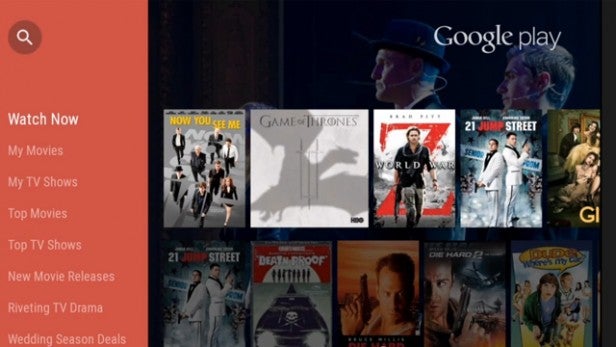 The Google Play Movies app, for example, has been translated straight from the tablet app to your TV. The strong material colours from Android L have been introduced, but tailored for that “lean-back experience” that Burke is heavily emphasising.

Selecting films or programmes will present you with “Detail Mode”, with a nice content backdrop and then a synopsis of the programme floating in-front. It all looks very slick and speedy, even when navigating with the Android Wear smartwatch.

As for Google Play Games, you can tap into this on Android TV for achievements, multiplayer, any other content accessible on your phone and tablet.

Burke said this is particularly important because 3 out of 4 Android users play games.

Android TV will also have full Google cast support, so you’ll be able to use the platform just like you can a Chromecast to push content like music and photos to your TV.

There will also be a special Android TV Apps store, which will launch in the autumn with Android L.

Google also teased that Android TV streaming boxes from companies like Asus and Razr would arrive later this year as well.

Razr states that its Android TV box will “stream movies, music and other apps for large-screen entertainment with an emphasis on gaming.” In fact, it promises to offer “hardcore” gaming in some capacity, but it’s keeping mum on that for now.

“In keeping with the spirit of Google I/O, we will not be discussing specific product details at this time.”