New statistics posted on the Google Developers site show that one third of Android devices are now running Android 4.1 or 4.2 Jelly Bean.

Android Jelly Bean is now installed in 33 per cent of all Android devices and looks set to overtake Android Gingerbread within a month.

In the past month, Android Jelly Bean’s distribution share has increased by 4.6 per cent, which saw Android Ice Cream Sandwich’s userbase drop by 1.8 per cent and Android Gingerbread to lose 2.1 per cent of its users.

Currently the most popular version of Google’s mobile OS, Android Gingerbread will be overtaken in popularity by Android Jelly Bean, now just a few percentage points away from Gingerbread’s figures, reveals the Google Developers site.

Jelly Bean is the only Android iteration seeing its distribution numbers increasing over the passing months. Google and Android developers will be pleased for that, as it means the Android platform is becoming less fragmented.

In April, Google modified the way it measures the amount of active users for each Android platform to make distribution figures more accurate. The search engine giant used to calculate the figures according to check-ins to the various Google servers, but now uses Google Play store visits to more accurately monitor the number of users on each Android iteration.

Google’s much anticipated new OS, Android Key Lime Pie, has still yet to be showcased, failing to make any appearance at last month’s Google I/O conference.

There is not much known about Android 4.3 Key Lime Pie, except that it may offer support for Bluetooth Low Energy (BLE) and OpenGL technology.

Google has been tipped to launch a white Google Nexus 4 running the new Android OS on June 10.

Next, read what iOS 7 features Apple needs to catch Android. 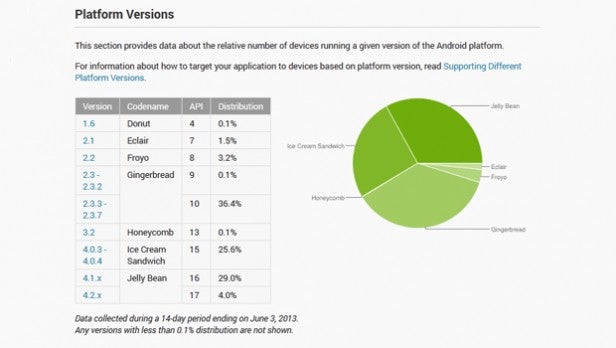