This month brought the news that Taneli Armando – the man responsible for getting Snake onto over 350 million Nokia devices since 1997 – is updating the concept for modern smartphones.

While this might not mean anything to some of our younger readers, it’s a big deal for those advanced enough in years to recall the era when brick-like “feature” phones were all the rage, colour screens were the stuff of a madman’s dream and your battery lasted weeks rather than hours.

However, Snake is just one of many iconic mobile games which have helped turn our blowers into fully-blown gaming platforms. Here’s the top five games we think have helped shape the mobile games of today. 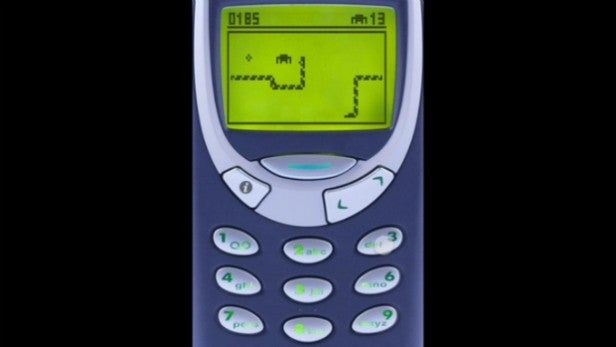 Before the iOS App Store arrived and ushered in a new period of gaming excellence, Snake was all we had to keep ourselves entertained while standing in the pouring rain waiting for the bus. It wasn’t a new concept, but it was one of those rare moments – like when Tetris was ported to the Game Boy – where hardware and software worked perfectly in tandem to create an instantly accessible experience.

The simplistic visuals were well suited to the small and blurry monochrome screens of Nokia phones of the period, and the basic controls – up, down, left and right – could easily be mastered despite the lack of a proper gaming interface.

Nokia pre-loaded this game onto many of its phones at a time when manufacturers were only just waking up to the potential of gaming on mobile devices; it was a canny move which attracted many consumers to the brand and arguably set in motion the shift towards cellphones being acknowledged as entertainment devices.

Nokia even created a multiplayer version which used the infra-red port of 6110 to connect two phones together for head-to-head play – another first. 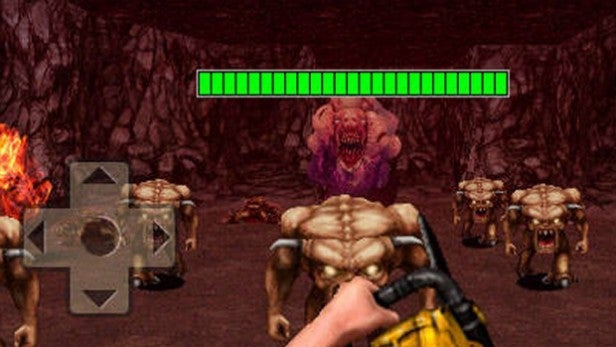 Porting one of the most intense action titles of the ’90s to pre-smartphone mobile devices sounds like madness even today, and developer Fountainhead Entertainment obviously agreed. Doom RPG may share visual similarities with id Software’s iconic FPS blaster, but the gameplay is more slow-paced and therefore better suited to the clunky controls seen on the many “feature” phones available in 2005.

The player moved a single tile at a time and could turn in 90-degree arcs, making this feel more like Dungeon Master or Eye of the Beholder than Doom 3. Despite having to dial back the action, Doom RPG proved to be an engaging experience and offered the kind of depth that mobile gamers of the period had never before witnessed.

The game engine would be re-used for another RPG by the name of Orcs & Elves, which was so well-received that it would be ported to the Nintendo DS. 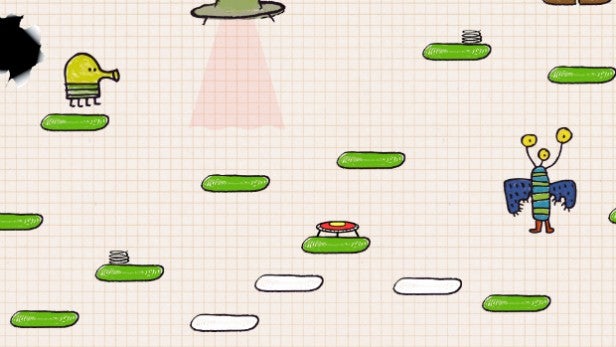 One of the earliest stars of smartphone gaming, Doodle Jump took an insanely simple premise – get as high as you can without missing a platform – and fused it with the motion-sensing controls of your typical smartphone.

It was yet another perfect combination of software and hardware, and the game’s score-focused approach made it the must-have app for many phone-based players.

Another savvy move was leveraging the growing interest in social media to make the game go viral; players could tweet or post their score to Facebook, and this not only advertised the game to others but also created a friendly sense of competition, which of course kept people glued to their phone screens.

Every endless runner or score-attack title you play on mobile device owes a small debt to Doodle Jump; over the years the game has been slowly improved – as well as ported to traditional consoles – yet the core remains intact.

If you need any better illustration of how basic ideas can turn into million-selling smash-hits when allied to the right platform, look no further than Doodle Jump.

Just as Doodle Jump showed the power of tilt-control in smartphone gaming, Flight Control perfectly demonstrated how a highly responsive touch-screen could offer an experience that was arguably unmatched on traditional gaming systems of the time.

Assuming the role of an air-traffic controller, you had to guide various planes onto runways without causing a collision.

Different plane types had different speeds, and after a while your screen would become awash with aircraft, calling for some deft fingerwork to avoid mid-air carnage.

This arrangement was ideal for the super-responsive capacitive touch-screens that had taken over from the more primitive resistive displays like the one seen on the pioneering Nintendo DS, and the title rightly sold by the bucket-load. 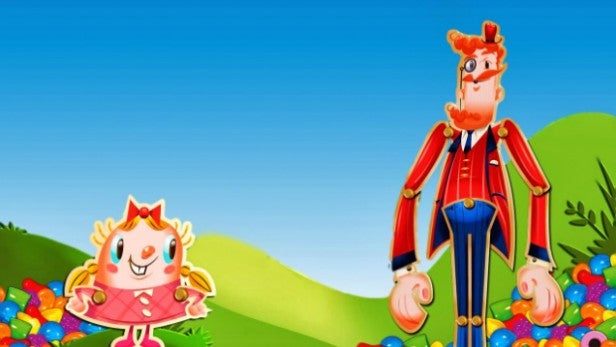 While many question the game design philosophy of Candy Crush and label it as little more than an underhanded attempt to part the player from their hard-earned cash, the astonishing popularity of the game – and the franchise it has since spawned – deserves some serious recognition. Yes, a significant part of this free-to-play title is focused on getting you to whip out your credit card details at timely intervals, but that’s ignoring the fact that it’s still possible to extract plenty of enjoyment before you reach that point. It also ignores the fact that Candy Crush’s mechanics – while not wholly original – have been refined to near-perfection. It may not be the kind of game that hardcore players are going to flock to, but Candy Crush has transformed an entire generation of people who had never previously touched a video game into addicted gamers – and that alone makes it one of the most important mobile releases of the past decade.