People would pay a lot of money to know the kinds of gifts exchanged under the Christmas tree at Frogmore Cottage this year – namely the British press. Besides the the Duke and Duchess of Sussex and baby Archie won’t reportedly be spending their first Christmas as a family in the UK, it doesn’t stop our minds racing wondering what kind of lavish gifts could be primly wrapped, especially those of the costly gadget variety.

It’s a just a bit of fun to consider what kind of outlandish items Harry and Meghan might buy one another and, indeed, what might be on their lists to Santa this year, don’t you think?

Thought the regular iPhone 11 Pro was expensive? Think again, because the luxurious Russian brand, Caviar, has cased the iPhone 11 Pro in 750-content gold with diamond details and trimmings to boot. It’s a tad on the excessive side, not to mention it makes the iPhone 11 Pro – an already fairly hefty 188g handset – weigh in at 226g. But, you know, that’s legitimate gold and multiple encrusted diamonds for you. 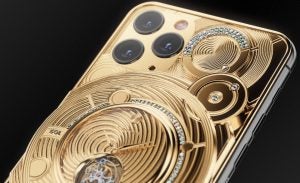 As if its extortionate, unnecessary materials weren’t enough, the design also houses a tourbillion watch face, which, we assume from that price tag, actually works. If not, we want our money back. Really, the exorbitant design almost outshines what Apple intended to achieve with this iPhone, offering one of the most premium cameras to date on a smartphone with its triple-threat rear lens combo and the A13 Bionic, which sees massive increases in performance that make it a cut above other smartphones on the market right now.

If we’re honest, we’re not even sure Meghan Markle has much need for a handset now she’s well and truly a part of the royal family, though if there were ever a phone more fitting for a royal, it would most certainly be one that comes bedazzled with precious stones.

With how dirt prone Apple’s latest premium variant of its true wireless headphones, the AirPods Pro, are we can sort of see the appeal of the gold encased editions, again from the ridiculously lavish-minded people of Caviar. Sadly, the $69,060 price tag just about knocks us out of the running for these ones. 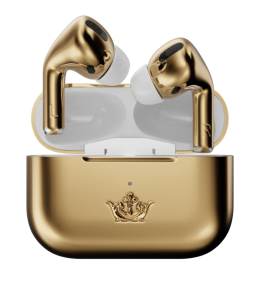 Never mind, considering it looks like they’re sold out already. We just hope Meghan Markle got her order in on time or Prince Harry might be left disappointed come Christmas Day. That said, the range does also extend – or rather, regress – to leather options that start at a far more reasonable(?) $1,020.

Got a spare $8000 hanging around? Meghan and Harry probably do, and what better present for a Marvel fan than your very own Iron Man suit.

Yep, that’s a thing you can actually buy thanks to the people at Full Body Armours. They will make your superhero dreams come true with the Iron Man Mark 47 suit that houses a lot of great features which will make you feel every bit the part. In fact, we imagine this is the lengths rich people go to when it comes to costume parties.

Pay a little more and the $8100 premium version adds an all-important ventilation cooling system, as well as motorised shoulder bridge missile cabin, wing flaps and motorised forearm missile cabins for your left and right arms. Short of allowing you to fly, then, this Iron Man suit is likely to make you truly feel the part, just without taking any villains out, which, considering the royals have to remain impartial, is probably for the best.

While many of us may end up on a Virgin Atlantic flight at some point in our lives, that can’t be said for Virgin Galactic, Richard Branson and Virgin’s first foray into commercial space flight.

Currently flights are only open to researchers, teachers and students with its research flights, but in the future Virgin Galactic hopes to have the ability to take non-astronauts to “Earth orbiting hotels and science laboratories, or providing a world-shrinking, transcontinental service.”

Admittedly there’s been a lot of controversy surrounding the use of private jets by the Duke and Duchess of Sussex, but considering this technically counts as a commercial airline (though probably even more detrimental to the environment), it’s likely celebrities and royals will be some of the few able to actually afford the fares.

Besides, discovering the survivability of living in space is probably our next step considering the way the Earth is going, so perhaps this is a fitting charitable venture for Meghan and Harry assisting in the research of space with commercial flights to actual space.

If nothing else, it puts your ‘trip of a lifetime’ backpacking across South East Asia to shame, huh?

Contact via Twitter
Commercial Content Writer
Alice graduated with a BA in Journalism from the University of Westminster in 2016, and has written for teen pop culture site Maximum Pop, as well as My Favourite Voucher Codes. With a knack for findi…