ZyXEL has traditionally offered one of the largest ranges of wireless broadband routers but its latest P-336M signals a sea change in its product line as out go the dull blue boxes of the Prestige range and in come a raft of sleek silver slabs. Not only that but it also represents ZyXEL’s first MIMO wireless product. So far, ZyXEL has resisted the temptation to join in the draft 802.11n bun fight but we were advised that it expects to deliver compliant product at the end of this year. To that end this currently makes the P-336M the fastest wireless product in ZyXEL’s stable.


The router certainly cuts a more dashing figure than its old Prestige buddies. Gone are the blocky chassis and ribbed cooling vents to be replaced by a smooth curved silver top panel. Interestingly, older ZyXEL routers have always run quite hot but the P-336M kept a much cooler head even after running continuously for a week. It comes with a quad of switched Fast Ethernet ports and the single RJ-45 WAN port indicates that you’ll need to source a suitable ADSL or cable modem. The router brings in a couple of unusual features as it’s the first we’ve seen that has a switch on the rear for enabling and disabling the wireless access point. 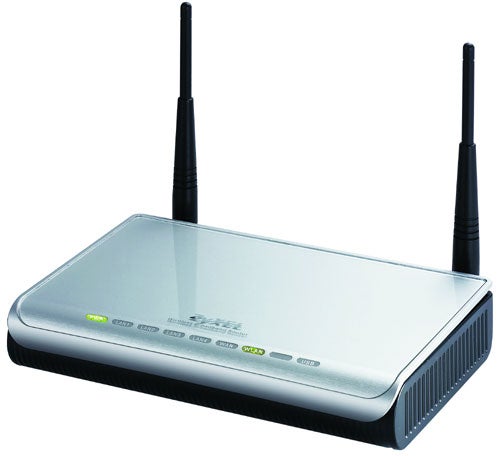 The USB port is purely for loading USB flash drives with wireless configuration files created using the Windows Connect Now configuration wizard. It was disappointing that the documentation provides no guidance but Microsoft comes to the rescue as you run the wireless configuration wizard on an XP SP2 system. It asks for an SSID, offers to automatically create a WEP or WPA encryption key and then copies a file to a USB flash drive. Following the wizard’s prompts you stick the flash drive into the router where we watched it automatically search for the file and use it to configure its wireless access point. Keep an eye on the router’s USB status light as it’ll blink three times to let you know the transfer has been successful. Sure enough, when we checked the management interface all our wireless settings had been added.


For testing we used an intelligent ActionTec ADSL modem and had Internet access up and running in less than a minute. If you’re not so lucky the web interface does offer a wizard to help get you going. Not only has ZyXEL redesigned its router chassis but the web management interface gets a make over as well and we found it even easier to use than its predecessor. The SPI firewall is switched on by default and will block all unsolicited inbound traffic but you can customise it with your own rules. A DMZ (demilitarised zone) allows one system to sidestep the firewall for external access. ZyXEL’s StreamEngine feature provides some useful bandwidth controls and allows rules to be created that prioritise specific traffic types based on protocol, port and IP address ranges.

We used ZyXEL’s M-102 PC Card for wireless testing and found that the installation routine on the CD-ROM failed because it couldn’t load a couple of libraries. We downloaded a later version from ZyXEL’s support site and this worked fine. The router provides plenty of wireless security features as you get SSID masking, MAC address filter lists and WEP and WPA encryption. WPA is offered as Personal and Enterprise with the latter requiring an external RADIUS server for user authentication. The router and PC Card both support a Super G Turbo mode but this didn’t make any significant improvements to performance. We used a 1.6GHz Fujitsu Siemens notebook running Windows XP SP2 and ran the open source Iometer utility over a link with a Supermicro Pentium D 3.2GHz PC on the LAN. With no encryption over a two metre line of sight connection it reported a modest raw read throughput of 38Mbit/sec. Our real world tests confirmed this with a 691MB video file taking 158 seconds to copy from the PC to the laptop and returning an average of 36Mbit/sec. Adding WPA encryption to the mix saw the same copy average only 26Mbit/sec. 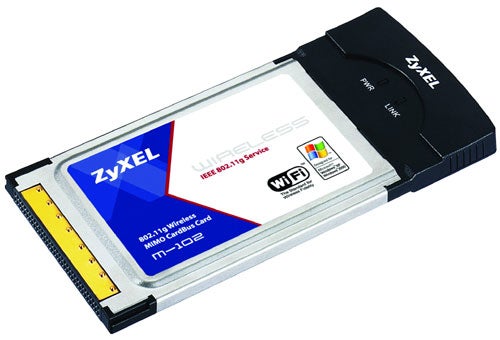 Compared with the likes of Netgear, the web filtering tools featured in the P-336M are far superior. Instead of a largely useless URL blocking list, you get the facilities to deny access to all web sites except those you list making parental controls far easier to implement. Furthermore, you can create multiple access control rules and schedules allowing different policies to be active on particular days and between specified time periods. Rules are applied to selected systems using their IP or MAC addresses and as the web access feature is a separate function you can decide whether a rule should include the list. If it doesn’t then the rule is supposed to block all Internet access to the systems specified but try as we might we couldn’t get it to work. We were advised by ZyXEL that this does not function properly due to a bug in the current firmware version which is currently being worked on. Finally, the router’s logging features are a cut above the rest as it keeps track of all visits to banned web sites and provides details of the systems that tried to access them.


Wireless performance isn’t good but ZyXEL’s sleek new router does offer a lot of useful features for the price. It has particularly good access controls and above average URL filtering capabilities plus wireless networking is a doddle to set up. 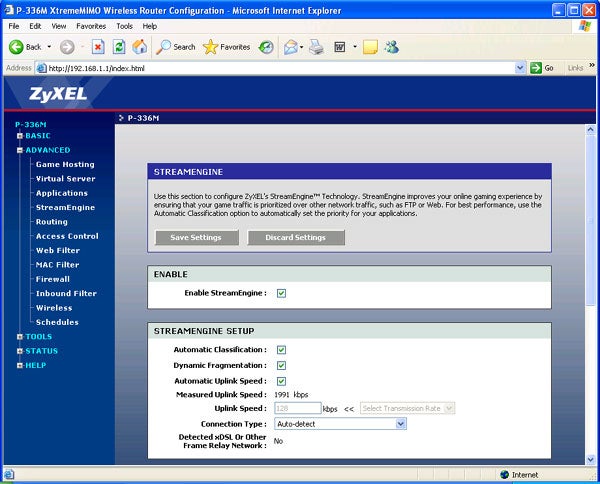 ZyXEL’s StreamEngine allows specific traffic types to be prioritised over others. 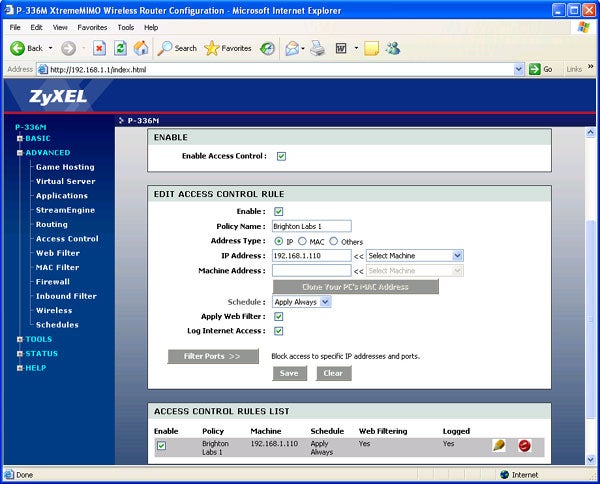 The router offers far better access controls than much of the competition but rules can’t currently block all Internet access. 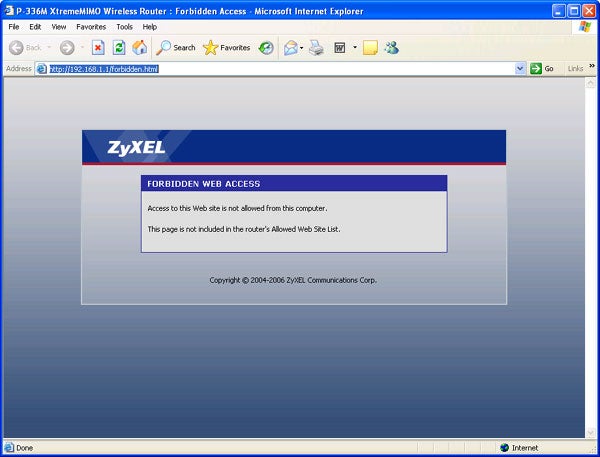 Try accessing a blocked web site and you’ll get this message from the router. 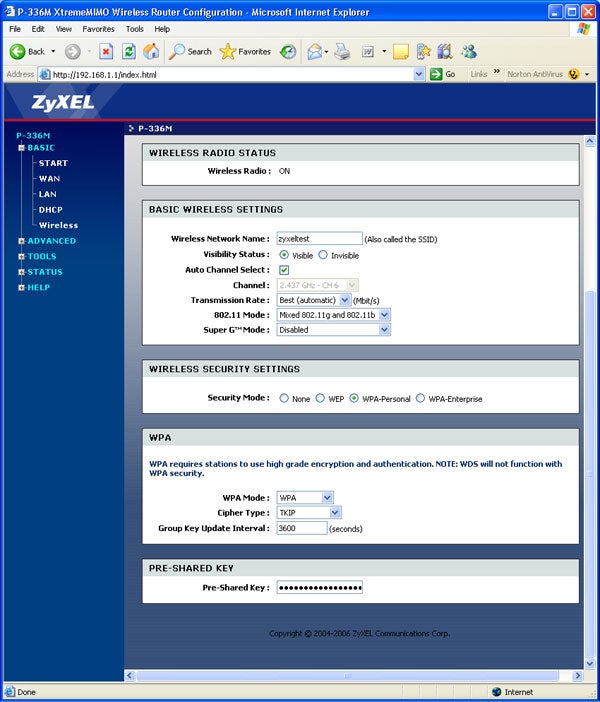 Wireless security is good and we used the USB port and a flash disk to create this profile in seconds. 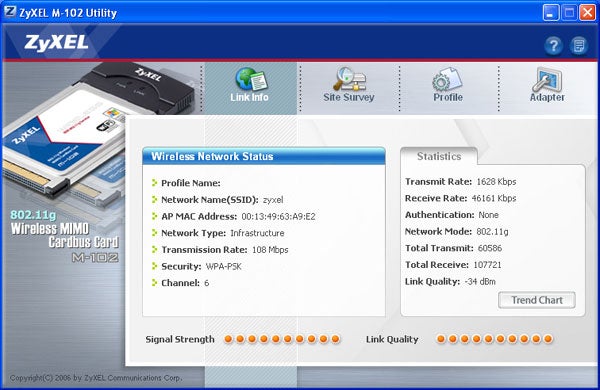