Nettops are perhaps more of a niche than they deserve to be.
Basically tiny, low-power desktop PCs, they’re ideal as media players,
unfettered by all the restrictions and limitations dedicated devices suffer.
They’re also great to have permanently hooked up on your desk, if all you want
to do is browse the web, do a bit of productivity, watch video and play the odd
casual game – in other words, what the vast majority of folks tend to do with
their computers. 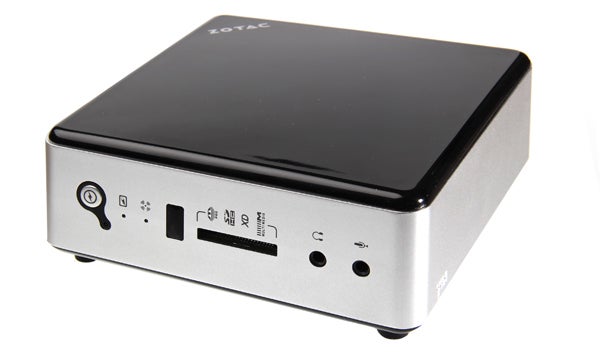 We’ve had a few amazing entrants in the small desktop
category recently, like the ASRock Vision 3D and award-winning Acer Aspire Revo 100. Unfortunately, though it was a standout effort in many
regards, Zotac’s Blu-ray playing entrant, the aptly named ZBOX Blu-ray, didn’t quite live up to our hopes. Now the company has its new
Nano, which ditches the optical drive but trumps its cousins and many
competitors in other ways, and manages to be smaller to boot. It packs an AMD
E350 CPU and integrated Radeon GPU, and comes in pre-built or bare-bones
options.

First off, let’s just emphasise how incredibly tiny and cute
this little beast is. Its footprint is actually smaller than a music CD case,
and it’s only slightly taller than the average mouse or half the height of a
mug, at a mere 5cm including its rubber feet. Frankly, we can’t remember ever
seeing such an affordable and versatile mini machine that fits on the palm of
your hand. 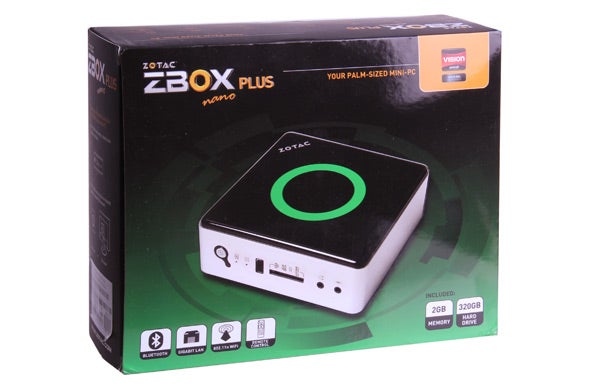 Its combination of a glossy black plastic top and
Apple-esque milled aluminium sides is also rather attractive. Its panels might
not fit as perfectly, but then the Zotac Nano AD10 Plus (to give it its full
and somewhat convoluted name) is in a whole different price class to something
like the Mac Mini, or even the aforementioned ASRock Vision 3D.

You see, the Nano can be yours for as little as £189
(without memory or hard drive). And though its performance won’t exactly be
comparable, its Atom-equivalent AMD CPU will handle daily workloads, while its
AMD HD 6310 graphics will make short work of any kind of HD video. Build
quality is excellent, and though the piano black top does pick up fingerprints,
it’s not too much of an issue. The power button’s action is solid yet crisp. It’s
also worth noting that a green LED ring lights up ‘in’ the black lid as soon as
you turn the machine on, which is a nice/garish touch depending on your taste.

Connectivity is where the Zbox Nano AD10 Plus (now try
saying that ten times fast) really shines, by offering everything we could have
asked for and more. At the front, we have an IR receiver which works with the
included remote, an SDXC card reader, and 3.5mm headphone plus microphone
jacks.

The rear hosts two USB 2.0 ports, two of the faster USB 3.0
variety, an eSATA port, Wi-Fi antennae input and Gigabit Ethernet. Video is
comprehensively covered by both HDMI and DisplayPort. On the wireless side of
things, meanwhile, Wi-Fi N and Bluetooth 3.0 round it all off nicely. Our only
minor quibbles are that we would have liked at least one USB port on the
machine’s front and a dedicated digital audio output, though the Nano will
happily pipe up to eight channel audio over HDMI. And while we’re being picky,
a TV tuner would have been an awesome addition.

When it comes to specifications, the Nano AD10 (the ‘Plus’
addition designates the model that’s preconfigured with RAM and a hard drive) sports
an AMD ‘Fuzion’ CPU and GPU combo, similar to that found in some netbooks,
tablets and of course rival nettops. Specifically, there’s an E-350 dual-core
processor that runs at 1.6GHz, which should provide performance that just about
tops a dual-core 1.8GHz Intel Atom. Essentially then, it will be adequate for
many people’s computing needs, as long as you’re not the impatient type, a
heavy multi-tasker or run CPU-intensive apps.

The graphics side of things is also interesting, as the Radeon
HD 6310 should get you playable frame rates in very undemanding games -
though it didn’t fare too well in our TrackMania Nations Forever test,
achieving a barely playable 25.3fps (frames per second) average on medium
detail and at 720p.

However, for video duties it will handle everything its
dedicated desktop siblings can manage, including online and offline 1080p video
in any format. The closest equivalent is probably Nvidia’s ION2, which we often
find pairing Atom CPUs. However, AMD’s solution uses slightly less power than
an Atom/ION combo while providing slightly more performance.

Getting to RAM and storage, you can either go the
preconfigured ‘Plus’ route, or buy the vanilla AD10, which lets you stick in
any DDR3 SO-DIMM and a 2.5in hard drive or SSD of your choice. Though the E-350
platform can support up to dual 1066MHz DIMMS in theory, in the Nano’s case
(pun intended) you’re limited to a single stick of ‘laptop’ memory. The AD10
sells for £189, while the AD10 Plus will set you back £255 with 2GB of RAM and
a Samsung 5,400rpm 320GB HDD. 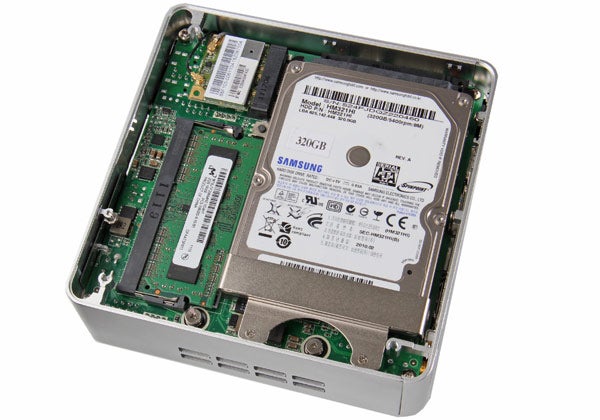 Considering you can buy 4GB of laptop RAM for under £30 and
a 1TB 2.5in HDD for around £50 these days, you’re definitely better off
installing these yourself, but it’s nice to have the option for those
disinclined to tinker with their PCs’ innards. You could even go so far as to
stick in an SSD, though that will likely be overkill compared to the rest of
the system.

Speaking of tinkering, Zotac’s Nano provides very easy
access. Merely undo four screws to remove its base, then two more for the hard
drive cage, and both memory and storage can be installed in mere minutes.
Regardless of your configuration choice, you will need to install an operating
system yourself, so if opting for Windows – instead of a free alternative like
Linux – you’ll need to factor in that cost too.

Though the lack of an optical drive is a given with a PC as
tiny as the Zotac Nano, you can always connect an external USB-based DVD or
Blu-ray drive to give you a machine with similar capabilities to the Acer Aspire Revo 100 (albeit lacking a TV tuner) for a lot less money.

Completing the Nano’s credentials as one of the more
versatile nettops and budget media centres around, the machine comes with a
Windows Media Remote. This slim and glossy device features comfortable
rubberized buttons that are a tad on the small side but easy to use due to a
logical layout. The remote’s only real down-side is that it uses cell
batteries, so you won’t be able to swap in rechargeables.

Other included bits are a USB IR extender and a black metal
VESA mount, for attaching the Nano to a wall or the back of a TV/monitor. No
video cable is included, but then most folks have at least one spare HDMI cable
lying around these days, or else they’re cheap as chips to buy. 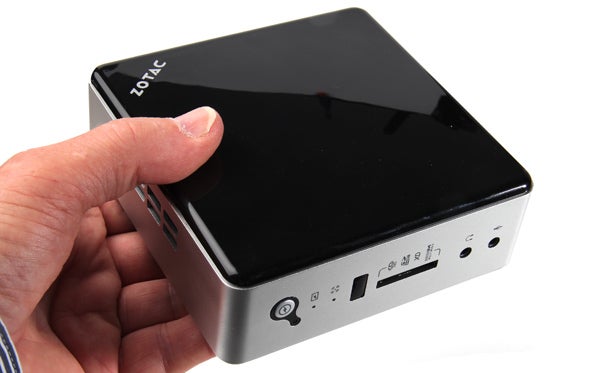 In use, the Zbox Nano AD10 doesn’t get too warm, and
produces a very light hum that only becomes audible if you’re unrealistically
close. Its bare-bones configuration is excellent value too – we really wouldn’t
recommend paying the extra for the prebuilt Plus, though even that isn’t particularly
overpriced compared to competitors.

Inclusions like USB 3.0, multiple digital video outputs and
an IR port with remote compensate for the shortcomings of many rival systems as
all-round media players, like the similarly-priced Sapphire Edge HD2 Mini PC to give but one example. Though there are cheaper
nettops than this Zotac, few in its class can match it for features or size.

With all the connectivity and (nearly) all the features you
could want in a nettop or media PC stuffed into a tiny, attractive,
milled-aluminium chassis, the Zotac Zbox Nano AD10 is a great entrant. Far more
versatile than dedicated media players and perfectly adequate as a ‘lite’
desktop system, it combines the best of both worlds to give you a super-cute machine
we have no hesitation recommending.