Overclocking – the activity of freely increasing your computer’s speed by tweaking underlying system settings – has always been something of a dark art. While many of us have dabbled over the years, the need to constantly learn the intricacies of each new architecture, the occasional disasters (if ever there was a task that typified the phrase “a little knowledge is a dangerous thing”, overclocking would be it), the limited benefit for potentially a lot of work, and the simple fact that computers (or more specifically CPUs) are plenty fast enough now without overclocking means more often than not we just let things be.


It’s no surprise, therefore, that many of the PC component manufacturers have, over the years, been trying to make overclocking more accessible. Whether through simple overclocking applications or hardware additions like BIOS reset buttons and POST displays. Few have really caught our attention though. That is, until we saw the Zotac Nitro. 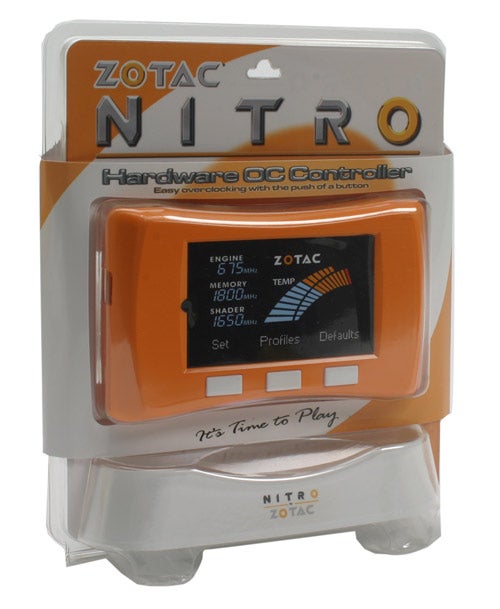 First unveiled at nVidia’s corporate shindig, nVision, this little plastic device plugs into your PC using a conventional USB connection and can be used to overclock any Zotac graphics card (and a few others besides, as we’ll see later) at the touch of a button and it promises to make overclocking easier than ever before.


The unit itself measures 138 x 81 x 21mm, which makes it just about the perfect size to fit snugly in the hand. It’s made of a rather garish looking orange plastic, which I guess you’ll either love or hate. Personally I would’ve preferred something a little more understated. 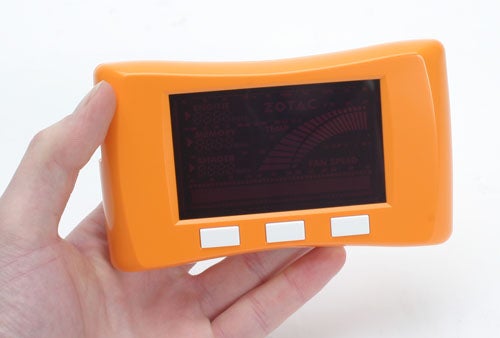 The screen uses Vacuum Flourescent Display (VFD) technology so, unlike an LCD screen for instance, it can’t be used to display any old data. Instead the various letters, numbers and symbols are fixed. This obviously limits its potential longevity if future graphics cards use different speed measurements to current cards and also means the Nitro can’t be modded to display other information. Also, we would’ve preferred to see numbers being used for the temperature and fan speed scales rather than the meaningless bar graphs. Characters, though, are bright and large, making them easily readable from a good distance and viewing angles are also very impressive. 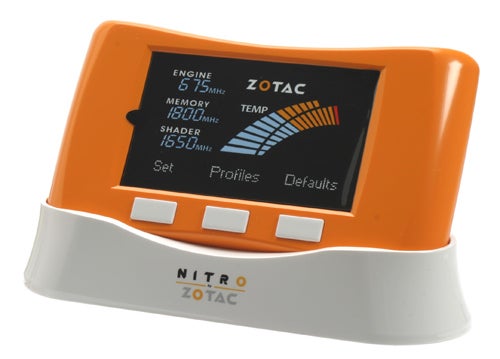 A neat white plastic stand is included with the Nitro. It’s got a good weight to it that combined with the rubberised bottom ensures the Nitro is held nice and securely, which is more than can be said for the token stands you get with some products where just the springiness of a USB cable is enough to knock the product over.

Installing the Nitro is as simple as connecting it using the lengthy (185cm) white USB-to-miniUSB cable that comes in the box then installing the drivers from the included CD.

For the Nitro to work you must run the Firestorm software that comes on the CD. It’s a simple program with just sliders on it for controlling engine (core clock), memory, shader, and fan speed and there’s a temperature readout as well. Clicking the options button lets you choose whether to have Firestorm start when Windows starts up and if so whether to have it apply your overclocking settings straight away.

It’s this need for Firestorm to be running that prevents the Nitro from being compatible with non-Zotac cards. If you try and run the software with any other nVidia card a warning message appears and when you click ‘OK’ the program closes. However, with a bit of experimentation, our friends over at bit-tech discovered that Firestorm can be forced to stay open by holding down the ‘Shift’ key when you click the ‘OK’ button on the warning message, enabling you to overclock any nVidia card (there’s no joy for owners of ATI graphics cards though).


Incidentally, the Nitro is also compatible with surprisingly old cards, as well. Certainly cards as old as nVidia 7000 series will work.


The controls on the Nitro reflect those in Firestorm except there are only three buttons with which to control the whole lot. Consequently the buttons are context driven with the left most generally controlling which setting you’re currently adjusting and the other two being used to increase or decrease the setting’s value. There’s also a profile system enabling you to switch between different sets of values at the touch of a button, which is great if, say, you only want your card overclocked when gaming. 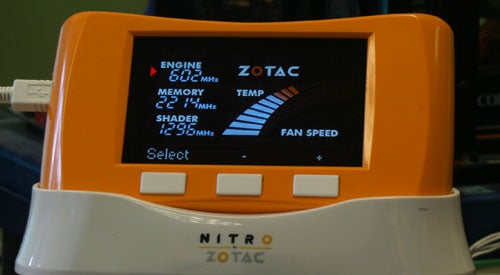 For the most part it’s a pretty simple system that is quick to master. However, there was one particular annoyance. If you’re adjusting a setting but then leave the Nitro idle for five seconds (to look up at your screen to make sure no artefacts have been introduced to your game by your latest clock increase) it reverts back to the main menu. Being as one of the three options on the main menu is ‘default’, which sets all the clock speeds back to their original settings, if you’re not careful you can inadvertently erase your work in progress. 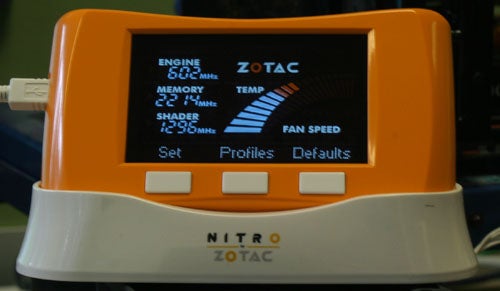 This does highlight precisely what is so great about the Nitro, though. You can overclock your graphics card while running a game, enabling you to instantly see the effects of each tiny increase and allowing you to more accurately find the exact limit of your card’s performance. If your game begins to show signs a corruption or even seems to crash, you can sometimes pull it back from the brink by dialing back the overclocking settings. It doesn’t always work but it’s better than what you can do with any other system of overclocking.


Obviously once you’ve found your optimal settings the Nitro holds no advantage over other software solutions like the profile manager in nVidia’s drivers or the keyboard shortcuts available in Rivatuner. However, it makes the actual process of finding those settings infinitely easier.

To test the Nitro’s abilities we enrolled a Zotac 9500 GT then thanks to bit-tech’s trick we also tried overclocking a Leadtek GTX 280. With the 9500 GT we quickly found we reached the maximum allowed overclocks available using the Nitro, going from the default speeds of 550MHz, 1,600MHz, and 1,625MHz (core, memory, shader) to 731MHz, 2,028MHz, and 1818MHz. This gives us an average increase of 23.8 per cent, which is a figure we saw reflected in our benchmarks where Crysis jumped from 12.7 fps to 16.6 fps. However, using nVidia’s overclocking tool in its drivers we found we could actually push the core clock speed further, eventually reaching 771MHz and further increasing our Crysis performance to 16.8 fps. 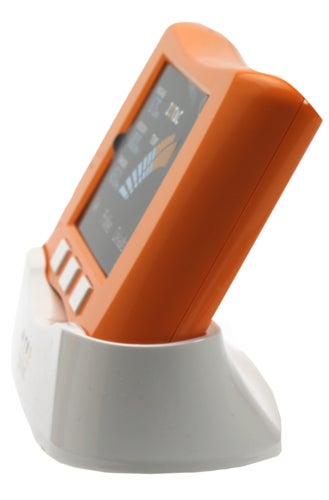 What does all this tell us? Well, mainly that the 9500 GT is a ridiculously good card in terms of overclocking, whereas the GTX 280 is less so. As for the merits of the Nitro, well it was certainly the most painless overclocking experience I’ve ever had. However, that’s not really the point. This thing costs around £80, which is an amount of money that will almost certainly get you more performance if put towards a faster graphics card in the first place. 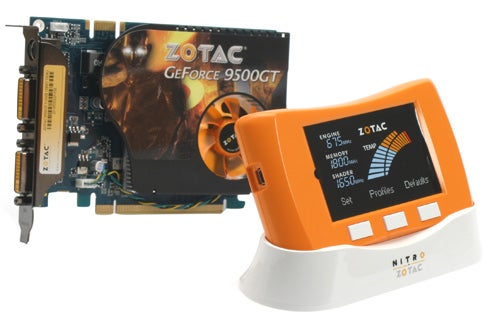 The only argument I can see for buying a Nitro is if you already have a top-end card like the GTX 280 and you just want to tweak an extra bit of performance out of it without resorting to things like SLI. Even then, we’d still hope to be spreading the cost over two or three future upgrades, which is assuming it still works with future cards.


The Zotac Nitro makes overclocking your nVidia graphics cards easier than ever before. Unfortunately its ridiculously high price of £80 means most people would be better off spending their money on a better card in the first place.