With ADSL fast becoming the dominant broadband standard all over the world, ADSL modems have become a commodity item and even ADSL routers are now commonplace in consumer homes. The Zoom ZoomTel X5v 5565 brings something new to the party by adding VoIP or Voice over IP to a consumer level product.


VoIP has so far been predominantly used by larger companies trying to save money on call charges. Of course consumer VoIP units have been available for a long time, but most of those have been limited in functionality and are usually PC bound. The advantage with the ZoomTel X5v 5565 router is that once set up, you can use any analogue telephone with the router to make VoIP calls.

But let’s take a look at what you get in the box before delving into the VoIP service. The main item is the router itself, which looks pretty much like any other ADSL router and the only giveaway is a small LED on the front labelled VoIP. Around the back of the router are four Ethernet ports for the built in 10/100Mbit switch as well as a USB port, so you could in reality use the router with 5 PCs as long as at least one of them is running Windows. There are also two phone sockets, one labelled ADSL and one Phone – both of which are pretty self explanatory. There is also a power connector and a small reset switch.


Zoom provides a good bundle of extras in the box as you get a USB cable, a network cable, two ADSL micro filters, a phone adapter, a cable to attach the router to one of the micro filters and of course a power brick. You also get a quick start manual and a driver CD for the USB part of the router which also contains the full manual in PDF format. Zoom has told me that future versions should include better printed manuals, but as this is a new product there has not been enough time to make a localised manual for the UK.

The VoIP service is provided by Global Village which is one of several companies that connects VoIP enabled routers or modems to landline telephones around the world. For calls to landlines there is a charge, although you get 20 minutes of free calls when you sign up to the service for the first time. The call rates can be found on the Global Village website and most of them are comparative to low cost telephone service providers.


You can also get a US phone number for a mere £2.95 a month which can be very useful for businesses that have a lot of incoming calls from the US – you can even specify a specific US State for the number that’s most convenient for whoever is calling you. The Global Village website has a directory service with all its users listed as well as online bill management with detailed call information such as charges, how long the call lasted and to where it was made. 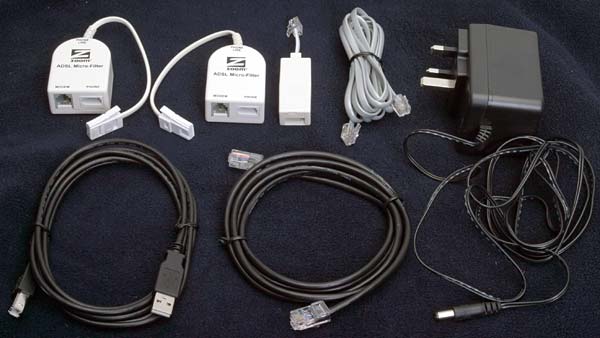 The Global Village service is also compatible with Free World Dial, Sipphone, Iptel and Iaxtel VoIP services and these calls are free of charge as are all Global Village VoIP calls. When you sign up to the service you’re given a seven digit Global Village VoIP telephone number which is tied to the router and other VoIP users can then dial you directly.


It is very easy to make a call using the VoIP service, plug a standard phone (cordless or wired) into the ZoomTel X5v 5565 router, dial the hash (#) key and then the VoIP telephone number. You can still make standard phone calls with your phone connected to the router, as these are routed through the PSTN network as normal.

But the most impressive aspect of this Zoom is the quality of the VoIP calls, although I only made a few VoIP calls – this was due to the fact that I only had one other person to call, and that was thanks to Zoom supplying me with two units. All the calls were crystal clear with no background noise. Add to this the fact that you can use a normal handset, and not have to even power your PC on, and the ZoomTel starts to look pretty attractive.

Setting the router up is a breeze as long as you don’t have a static IP or your ISP needs any special options set. Depending on how you have configured the router, you can access the user interface either via a clickable icon on your desktop or via your web browser. You then enter your username and password, press save and it just works. This makes a change from many other routers I have seen which have so many options that you get confused just looking at them.


There is also a quick setup for the VoIP service which takes you on to the Global Village website where you set everything up; the settings are then automatically downloaded to the router. Of course, this is not suitable for everyone and there is an advanced tab where you can make changes to just about every feature including the SPI (Stateful Packet Inspection) firewall, which is a real firewall that will prevent you from catching a lot of viruses and worms that seem to be spreading like wild fire on the Internet at the moment. This is also where you will find more advanced login options for static IP addresses, DHCP servers and so on. It is good to see that Zoom has catered for the whole spectrum of users and managed to create a product that is very easy to set up but with the more powerful features still available if required.


It’s pretty much impossible to do any kind of performance tests on an ADSL router, since there are too many variables to take into account, but I didn’t notice any performance difference compared to the Belkin router I use on a daily basis. 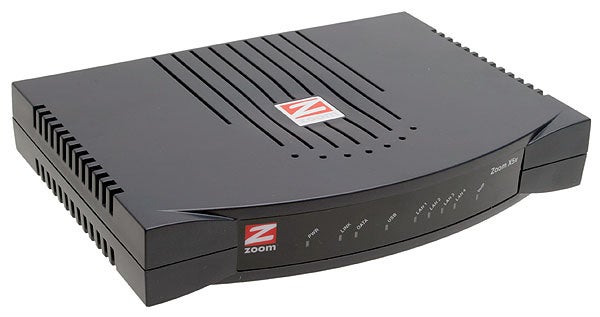 
But the high price doesn’t mean that the ZoomTel X5v 5565 is a bad product by any means. In fact it’s a fairly unique box of tricks and should be the ideal choice for small companies, especially if they have a branch office in another country. It can also be a good choice for home users as long as all their friends and family can use a compatible service.


The Zoom ZoomTel X5v 5565 ADSL+VoIP router is the first affordable VoIP solution to arrive at TrustedReviews. On top of that it’s easy to use and features a true firewall – definitely a “must have” these days. It is slightly pricey, but its USP and ease of use definitely wins my recommendation.