Like the DS, the Wii is practically made for classic point and click adventures, which makes it all the more surprising that nobody has really made a decent job of it before now. Sure, there have been a couple of quick PC ports where the remote simply takes over the job of the mouse, and I’m sure we’ll see more of these mildly depressing efforts in the future. Zack and Wiki, however, is something else. It’s a point and click adventure that really could only work on the Wii. 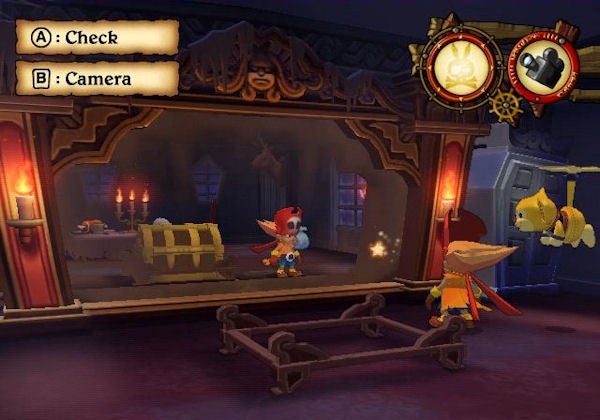 On the surface, fans of the Monkey Island series have particular reason to get excited, seeing as Zack and Wiki has a piracy theme – albeit a sort of weird fantasy spin on piracy that involves seaplanes and gangs of anthropomorphised rabbits. Here our hero is a youthful upstart, who – surviving an attack by rival pirates – falls on his feet when he discovers the skull of the legendary pirate, Barbaros. Surprisingly, the aforementioned head-bone is haunted by Barbaros’ spirit, which promptly does a deal with Zack. Hunt down the remaining body parts and Barbaros will lead our hero to Treasure Island, from whence he can sail away in the ship of his dreams. Without a thought, Zack and his flying monkey sidekick, Wiki, agree. 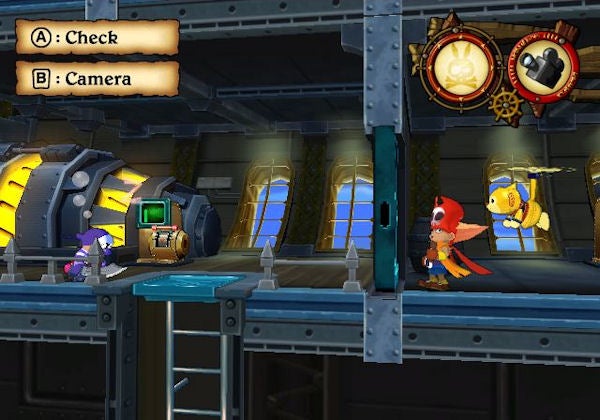 This is where the game breaks away from your traditional graphic adventure. Instead of one long story broken down into chapters and locations, we get a series of levels, each one being a discrete and often complex puzzle scene. The big disappointment for seasoned point-and-clickers may be that the game shows precious little interest in plot or character, with little in the way of dialogue and only the barest sense of an unfolding story. You solve a scene, return to the Pirate HQ that works as a hub, then travel on to the next one. In Zack and Wiki, the puzzles are everything.


Still, it turns out this is a good thing, because the puzzles themselves are great. Not only are they surprisingly intricate for something that looks like a family-friendly game, but they make excellent use of the Wii remote. The trick isn’t just what item you use and where and when you use it, but how you use it, with many actions mapped to particular movements of the motion-sensitive Wii remote. 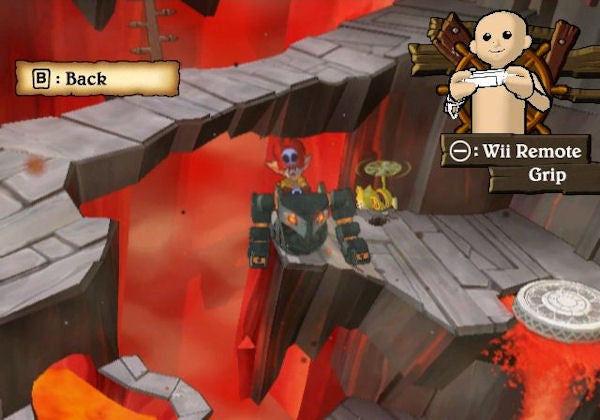 You point and click to move Zack around, with Wiki following eveywhere he goes, and by pressing B you can scroll the view to see what’s going on beyond the immediate area shown on-screen. Shaking the remote causes Zack to grab Wiki and shake him like a bell, which stuns creatures in the vicinity and also disperses hostile ghosts. As creatures turn into usable items, like a serpentine claw, a frog bomb or an arachnid tennis racket, you’ll be using this peculiar talent quite a lot. You can click on items to pick them up – only one at a time, I’m afraid – then click on specific objects or areas on the screen in order to use them. And it’s at this point that the Wii remote comes into its own.

Found a crank handle? Then you’re going to be using the remote like the handle to turn gears or work a pulley system. Turned a caterpillar into a saw? That dodgy looking pillar is begging to be sawn down with a nice back-and-forth action. There’s fishing, shovelling, batting, clawing, twisting, turning, rotating and placing to be done, and it’s all going to have to be mimicked physically with the Wii remote. Gimmicky? Maybe a little, but it really does add to the sense of involvement with the game and its puzzles. Sensibly, we even get an onscreen prompt to show you how to hold the remote and use it. 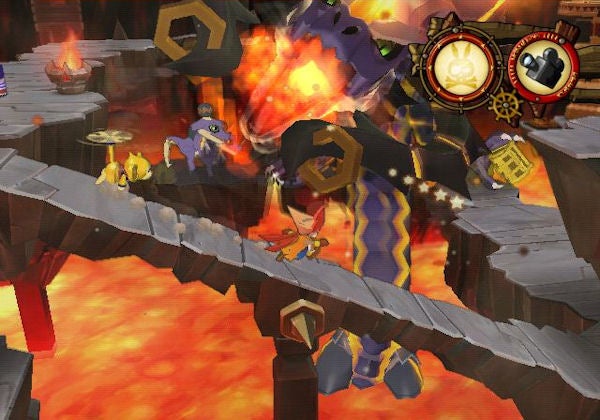 The stages, meanwhile, start off easy, soon get tricky, and get truly nightmarish in their complexity once the game hits its swing. Remember those bits in Monkey Island 2 where you had to put together some bizarre chain of events in order to obtain a certain resolution? Well, Zack and Wiki easily equals them for mind-boggling trauma on a regular basis. An early scene that involves a mole, a frog, a snake and a couple of scaredy-cat pirates to dislodge a huge icicle might seem tough, but by the time you’re dealing with multiple lava flows, various see-saw mechanisms, numerous spiders and several potentially Zack-crushing balls, you’ll realise that it’s only getting harder and harder and harder. Each scene might only take five minutes to complete once you know the right sequence of objects, actions and solutions, but you can easily spend thirty minutes to an hour just working out exactly what that sequence is. 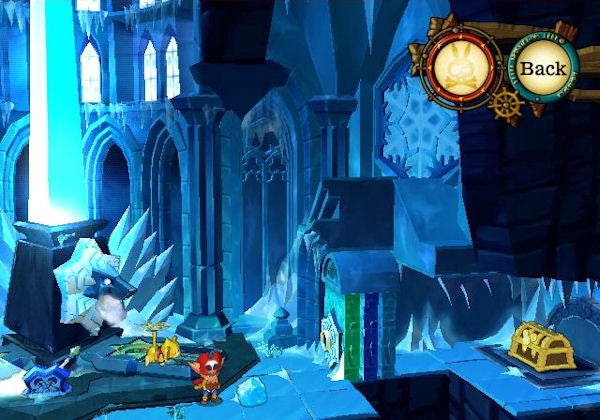 If you’re stuck, the game does have its own in-built hint system, courtesy of a dotty fortune teller and the oracle dolls you can buy from her shop at Pirate HQ. All the same, there may be times when you find yourself reaching for an FAQ – and I won’t blame you. All I can say is that the solution is usually quite logical if you stop and think, and that the game usually gives you a choice of stages to tackle at any one time. If you do find yourself banging your head against a brick wall, you can usually give something else a try. You might even learn something that might help!


In general, Capcom has done a beautiful job. Zack and Wiki looks sumptuous, with some of the loveliest cartoon-style graphics I’ve seen in any game to date. The areas themselves are superbly themed and realised, and if the design sticks to the classic themes of old-school platform games – here’s the icy bit, watch out for the lava, let’s explore the haunted castle – the artwork is gorgeous and the little touches, like the constant heat haze in the lava levels, atmospheric. 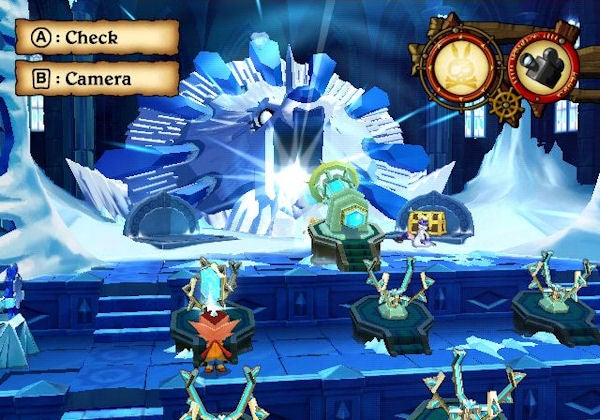 Personally, I also like the fact that Capcom has stuck with nonsense voices instead of English dialogue – it makes the characters so much more charming – and the cut-scenes and quips are constantly amusing too. Plus, it’s a big game with a depth that might surprise you. Not only are there seven main areas to get through, but also a host of secrets to discover and a ranking system to encourage replay (though whether you’ll really want to go back through puzzles when you already know the solution is another matter). Unlike so many Wii games, Zack and Wiki is built for more than just a weekend’s play.

All the same, it is a game with one really serious flaw, and that’s the sheer level of frustration involved. The old LucasArts games had two cardinal rules: don’t kill the player, and never let the player do something that will prevent them getting further in the game. Playing Zak and Wiki, you realise how sensible these two rules were. Not only can you die – and sometimes quite suddenly – but doing so means having to repeat the whole level from the beginning unless you can back out using a shop-bought revive token. These are relatively expensive, and in some missions timing is so crucial that you can burn your way through your stock with ease. What’s more, using one reduces your score and throws away your current stock of collected currency – the very thing you’ll need to buy revive tokens for your next adventure. Add in the fact that you can make mistakes that make the current level impossible to complete, and you have a recipe for remote-throwing levels of annoyance. 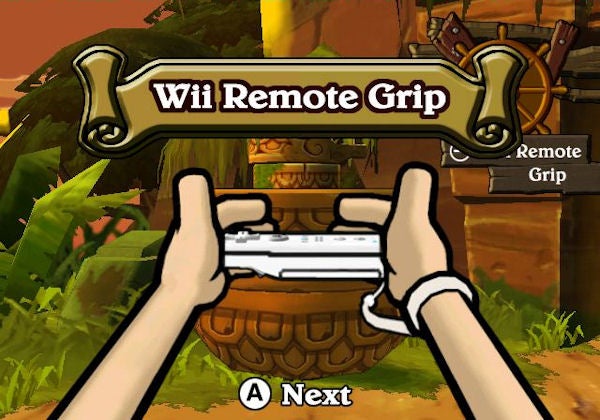 And it gets worse. Sometimes the controls get twitchy, and sometimes you lose the cursor altogether, leaving you waggling the remote furiously – often at a critical moment in the stage. Having spent half an hour avoiding killer stone idols, solving junction box puzzles, and making careful use of lava-powered lifts, do I really want to get killed by more hostile idols at the very end of the stage just because my cursor won’t behave? Nope. I don’t think so. Sometimes you just have to walk away, simmer down, then come back again once the red mist has cleared.


The fact that I always come back is testament to how charming and enjoyable a game this otherwise is. It’s especially good if you like playing Wii games with your family, because while there’s obviously no multiplayer option, it’s fun just to sit around and offer advice while other people play. In our household, it’s become something of a group effort. Oddly, this helps reduce the annoyance levels, because when one player gets sick of the routine, someone else is always waiting to fill the breach. 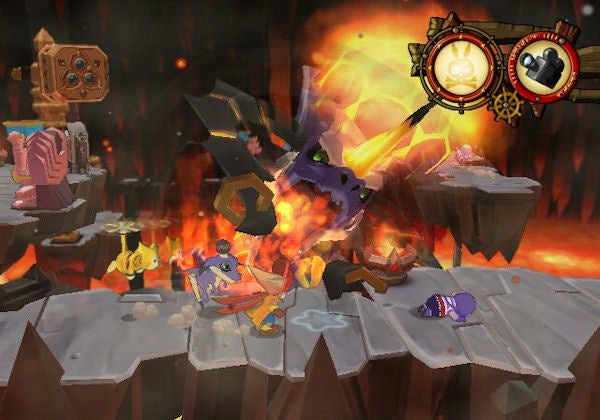 So Zack and Wiki isn’t perfect, nor is it quite in the same class as Mario or Zelda. All the same, it’s one of the few Wii titles to come even close, and one of a handful of truly essential titles on the system. Most of all, I hope it’s a game that will inspire other developers to try something similar, and maybe even a few old hands to produce point-and-click adventures that combine the best of the old narrative approach with the fun of the Wii controls used here. Until someone pulls that off, this will more than suffice – it will keep you enthralled, annoyed but enchanted right until the end.


A storming puzzle adventure that makes wonderful use of the Wii. Just prepare for some moments of severe frustration along the way.