Yoshi Touch & Go hovers dangerously close to being the first bona-fide classic on the DS. Like so many of Nintendo’s golden greats, it’s based on a simple concept and designed around the strengths of the platform. For a Sony or Microsoft game, this would usually just mean the technical strengths – let’s find out how many polys we can push and show off the new water shader that the boffins came up with last Wednesday – but with Nintendo, it’s always about the control. If Mario 64 wrote the book on what you can do with a 3D display, an analogue controller and a few buttons, and DK: Jungle Beat showed how much you could do with a stupid set of bongos, then Touch & Go is all about the power of the pen. It’s a game that would only work on the DS. 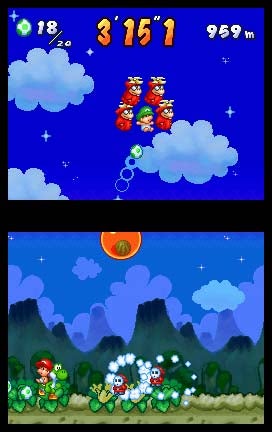 But its genius is flawed. Not enough to ruin the game should you buy it, but enough to make you think twice about the investment.


For those not in the know, this is the platform game where you draw the platforms. In the initial score attack mode, you first find yourself protecting baby Mario as he descends from the sky. Drawing slides keeps him collecting golden coins and out of trouble. Drawing rings around the various floating baddies traps them in bubbles and transforms them into coins. These can then be dragged into the infant’s path for points. 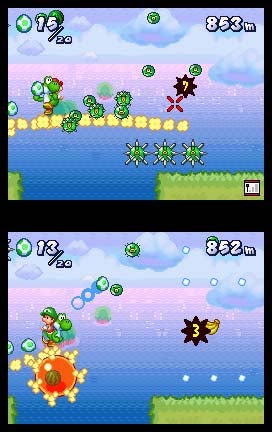 Sounds good? That’s nothing. Once Mario hits the ground, Yoshi comes to the rescue and the game becomes a little more like a regular 2D platformer, except that drawing is still the name of the game. Strokes create platforms for Yoshi to race across or bridges over chasms. Tapping the screen under Yoshi forces him to jump or hover. Tapping the screen elsewhere sends an egg flying off in that direction, and once again the various fiends can be circled, trapped and dragged. As Yoshi needs fruit to make eggs, you also need to keep him supplied with these. All this takes a little getting used to, but it’s brilliant. It’s also simple, intuitive, fun, imaginative, and very entertaining: all words we associate with Nintendo platformers from the original Super Mario through Yoshi’s Island to the present day.


However, here’s a few you might not be expecting: short, limited, mildly disappointing, lacking in overall vision. You might not want to hear it, but Yoshi’s Touch & Go is all these things as well.

The central problem here is game modes. It didn’t help that my copy came in Japanese, but I spent my first hour with Touch & Go convinced that I was missing something vital: the main single-player game. The first option, High Score mode, gives you just one vertical level with Baby Mario, then one horizontal level with Yoshi. That’s it. Score over 300 and you open up a bonus game mode – Time Attack, where Yoshi has to rescue Baby Mario from kidnap – but this isn’t going to keep you busy long term. 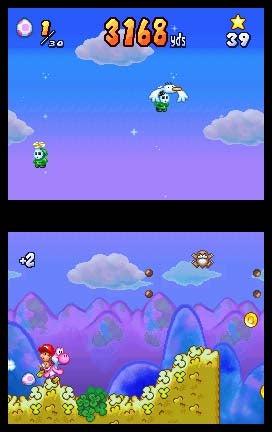 So, on to Marathon mode. At first, this feels more like the real deal. After Mario’s initial descent, it’s up to Yoshi to carry him as far as they can get over various forms of desert, cavern and forest landscape. Every 1000 meters, a new environment begins and a new Yoshi takes over. The odd thing is that the levels, in as much as the environments can be described as levels, are created seemingly at random, like building blocks of platform games shuffled into order as you go. With no beginning and no end, all you need to worry about is getting as far as you can and climbing the high-score chart. Once again, topping the chart brings you a new bonus mode, Challenge, adding an Out Run-style time limit to the general Marathon mix.


Before we go on, lets all be absolutely clear about one thing: Marathon mode is a lot of fun. The level variations work well, the game keeps throwing in new tricks to keep your interest, and the urge to get just another few metres next time is hugely addictive. Share your DS with a friend or loved one and it’ll keep you both busy trying to outdo one another for days. What it’s not, is a fully-fledged single-player game. 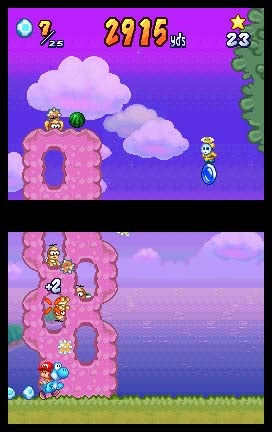 You see, despite the undoubted appeal of all this old-school arcade gameplay, Touch & Go leaves you crying out for the old basics of the 2D platformer: proper levels, with new skills to be learned, new environments to be explored, bosses to be beaten, and a sense of progress. It’s not that we really care about the narrative stuff, but part of the appeal of, say, Yoshi’s Island, was the way in which it added and extrapolated on the game mechanics as the levels went on. In the hands of a Shigeru Miyamoto, a classic platformer is like a Jazz group forming new riffs from old themes before they get a chance to get dull – you’re constantly surprised by brilliant, challenging bits of game design that add new twists to the basics. In comparison, Touch & Go seems a deliberate step backwards – a step leading all the way back to the original Super Mario Bros.

In addition, it’s a game that’s hard to get your teeth into. As a single encounter with any sort of baddie is enough to send you back to the Retry menu, any progress you make can be lost in a fraction of a second. Admittedly, this adds to the game’s addictive strengths, but at times it feels more than a little unfair. Sudden attacks from bombing bears when you have just hit the 3,000 metre mark are enough to cause a hideous outburst of profanity on the train into work. It’s the game that ASBOs were made for. 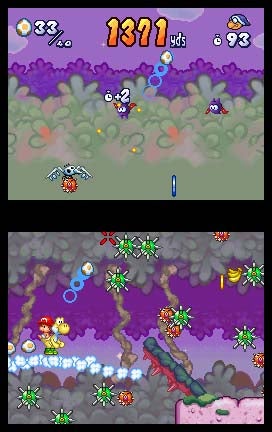 All the same, I can’t help loving it. Maybe it’s the presentation; the way that, like Yoshi’s Island, it creates its own strange world of wobbly edges and crayon colors, ludicrously cheerful music and childishly gleeful sound effects. Maybe I just can’t stop coming back to reclaim my spot in Marathon mode, or because the multiplayer versus mode – only one copy needed if you want to play against a friend – is also a lot of fun. But mostly, it has to be the game’s sheer charm. Just when you think you’re sick and tired of it, you leave it for a day, give it another try, and find yourself captivated once again by its stupid, but oddly brilliant gameplay. This could have been a classic, but let’s forget about what could have been. Should you buy it now? Well, it’s touch and go, but I would.


Nintendo has come up with a brilliant game mechanic, then failed to quite do it justice. The lack of proper single-player game is disappointing, but Yoshi’s old-fashioned arcade strengths should not be underestimated.