A full 5.1 speaker system is the best way to experience home cinema, but for many people practicalities such as room layout, budget and clutter-fearing partners make it an impossible dream.

Thank goodness then for speaker systems like Yamaha’s YSP-2500. It’s a soundbar equipped with sound projection technology that delivers an enveloping surround effect without littering up your living room with loads of boxes and cables.

It works by bouncing beams of sound off the walls, fired into the room by 16 drivers along the front of the bar. The result, says Yamaha, is more convincing than the ‘virtual surround’ modes used by most soundbars. Deep bass is provided by a wireless subwoofer.

The YSP-2500 sits between the cheaper YSP-1400 and step-up YSP-3300 in Yamaha’s range of ‘Digital Sound Projectors’ – soundbars to you and me. It’s pricier than your typical soundbar, but with such a vast range of features on board and the promise of realistic surround sound, it’s already looking like a good investment.

Not many companies have their own ‘look’ but Yamaha certainly does – one glance at the YSP-2500’s sleek, jet-black enclosure and you know who made it. It’s effortlessly attractive, sporting an aluminium top panel with an elegant hairline finish, while glossy slanted side panels catch the eye. A silver version is also available. 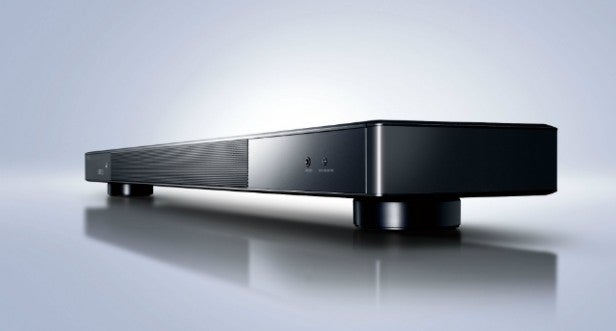 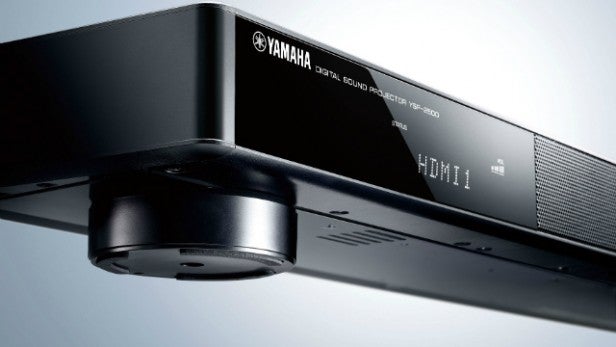 It’s wall mountable using the optional SPM-K20 bracket, but when placed on top of your TV stand you can adjust the height to make sure it doesn’t block your set’s remote IR receiver. Twisting the unit’s thick circular feet adjusts the overall height between 73mm and 86mm, but if it still blocks the receiver you can remove them completely, dropping the height down to 51mm.

However, all this messing about is academic, as there’s an IR repeater on the back that passes remote signals to the TV.

On the front of the YSP-2500 is a dot-matrix display showing the current source and volume level, plus a ‘TX’ symbol indicating that the subwoofer is connected. The display is fairly small but just about legible from our sofa. On the right-hand side are two 3.5mm jack sockets for headphones and the IntelliBeam optimisation microphone (more on that later). On top you’ll find a few buttons that control input, volume and power.

The Yamaha’s extensive connectivity includes three HDMI 2.0 inputs that pass through 4K 50/60p and 3D signals, while the output also supports Audio Return Channel. They’re joined by two optical digital inputs, analogue RCA input, a 3.5mm input, a system connector and a subwoofer output in case you want to use a different sub.

With its drab styling and a large front porthole, the subwoofer is no oil painting. But the choice of vertical or horizontal placement options brings flexibility, and wireless pairing with the soundbar is hugely convenient. Build quality is excellent too, with a rigid cabinet designed to minimise resonance. On the inside are two 10cm woofers and a 75W analogue amplifier.

The 16 28mm drivers running along the front of the YSP-2500 fire sound into room, which is reflected off the walls and towards the listener. These beams can be adjusted manually or automatically to guarantee the best surround performance.

There’s a choice of beam modes to suit different sources. The 5 Beam+2 mode is designed for 7.1 soundtracks and 5Beam is for 5.1; 3 Beam widens the listening area for music playback; plus Stereo+3 Beam and Stereo+3Beam Plus 2 are recommend for music DVDs.

And true to form Yamaha has crammed the bar full of CINEMA DSP modes, including three for movies (Sci-Fi, Adventure and Spectacle); three for music (Music Video, Concert and Jazz Club); and four for entertainment (Sports, Talk Show, Drama and Game).

The YSP-2500 is a 7.1-channel system and delivers 162W of power – 2W from each of the 16 drivers and 130W from the sub. Completing the feature list are Bluetooth with aptX support, Yamaha’s Compressed Music Enhancer and UniVolume.

With so many features and connections on board, setup is more complicated than your average soundbar, but Yamaha does everything it can to help. Optimising the sound beams for your room is a potential headache, but the YSP-2500’s IntelliBeam auto setup system makes it easy.

Connect the supplied microphone to the front, place it on the supplied cardboard stand at listening height and the YSP-2500 plays a series of test tones. It analyses the acoustic properties of your room (size, shape, wall material) and adjusts the beam angles, focal/travel lengths, image location and volume accordingly. That way you don’t have to worry about anything – IntelliBeam simply works out the best settings for your environment. It’s easy and quick to carry out.

You can also adjust the beams manually using the onscreen setup menu, which is superimposed over the HDMI output. The display appears in the top left-hand corner of the screen and dispenses with pleasantries like icons or graphics – this text-based menu is as basic as it gets. It does, however, afford you control over every facet of the system’s performance, including sound modes, subwoofer and HDMI sockets.

The remote is also very thorough, looking more like an AV receiver handset than a soundbar one. It’s a full-sized affair – none of your credit-card-style malarkey here – and is covered in buttons, but the neat layout stops it feeling cluttered. The rubber buttons are arranged into groups, with individual source keys at the top and sound modes at the bottom, while the direction pad and volume controls are conveniently placed in the centre. 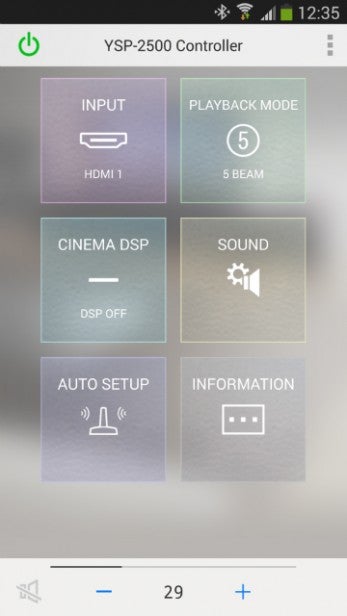 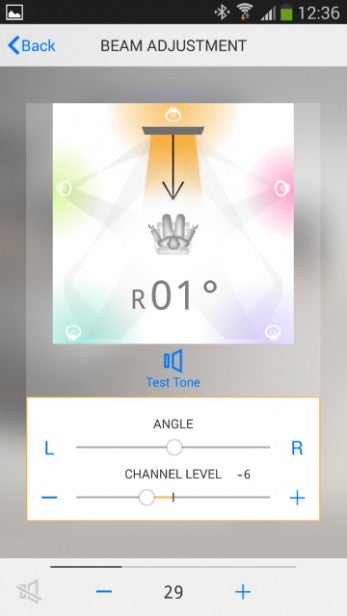 You can also operate the YSP-2500 with your smartphone thanks to Yamaha’s free Home Theater Controller app for Android and iOS. Once paired via Bluetooth, you can access the same basic controls as the physical remote, but as an added bonus you can adjust the beam settings and DSP modes using slick, eye-catching graphics – a much easier method than the onscreen menu. Its attractive layout and detailed functionality easily make it one of the best AV apps we’ve tested. 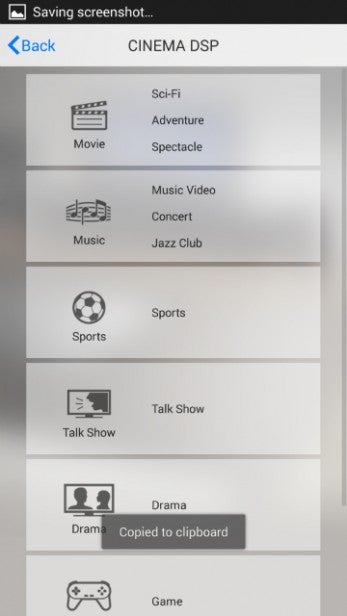 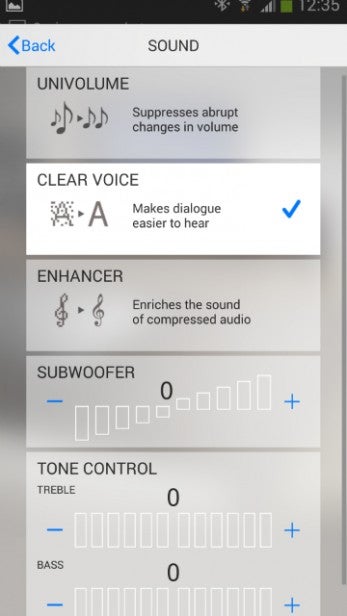 When it comes to surround sound, Yamaha’s soundbars are second to none – and the YSP-2500 is no exception. Unlike the virtual surround tech offered by most soundbars, Yamaha’s sound beams actually place effects behind you while keeping dialogue and music locked to the centre. The result is a remarkably wide and enveloping soundstage that puts you in the heart of the action.

We tried it out with the first beach battle scene in Edge of Tomorrow on Blu-ray and our gobs were well and truly smacked. As Cage free-falls from the quadcopter, fellow soldiers and missiles whizz around the room giving a wonderful sense of vertical and horizontal expansion. Remarkably, the beams pass these sounds smoothly between channels, so objects really feel like they’re zooming behind you. 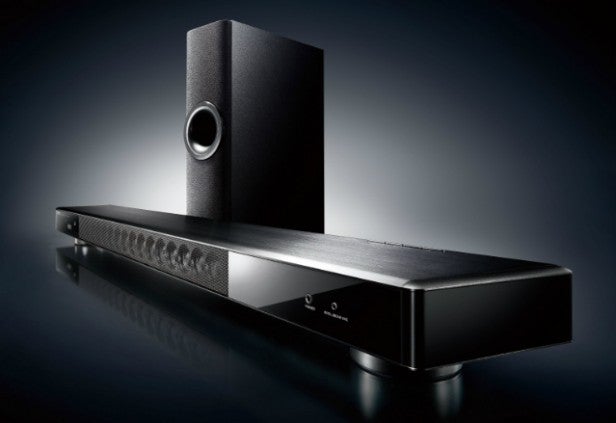 Gunshots and missiles ping deliberately to the back of the room, and as copters come crashing to the ground the debris scatters around you. This scene is the perfect showcase for sound beam technology, with plenty of clear transient noises to work with – quieter scenes with subtle background ambience aren’t nearly as impressive.

We used the Yamaha’s 5Beam+2 mode to reproduce the disc’s 7.1-channel DTS HD Master Audio soundtrack, and although it’s no match for a real 7.1 system it’s the closest any soundbar has come.

On the downside, the technology is dependent on your room layout and seating position. If you have big bits of furniture against the walls, or an open space with nothing to reflect the beams, then the impact is diminished. Similarly, you need to sit bang in the sweet spot to get a proper sense of surround placement. But even if your room doesn’t tick all the boxes, the YSP-2500’s naturally spacious sound is still more immersive than most soundbars.

And besides, there are many more strings to the YSP-2500’s bow. Its crisp, biting tone heightens the excitement of any scene, making the rat-tat-tat of machine gun fire sound brutal. It’s an invigorating performer but thankfully it doesn’t distort when you push the volume high. 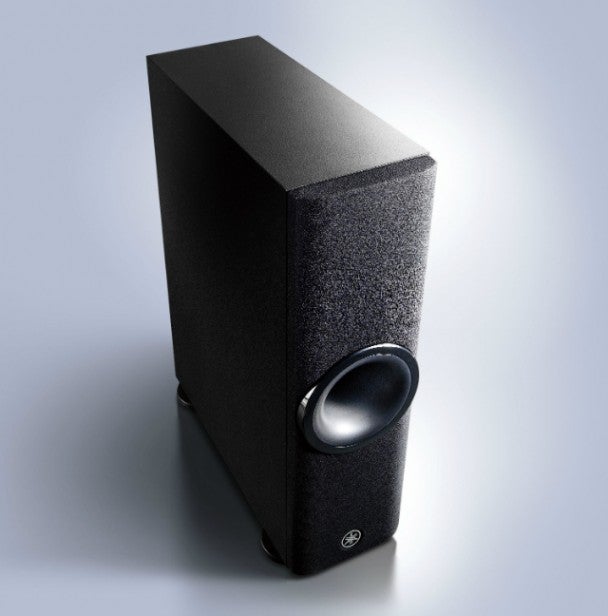 There’s plenty of detail too, demonstrated by the gentle rustle when Mimics burst through the sand. And with so much else going on it’s easy to overlook the contribution of the superb subwoofer, which is quite possibly the star of the show. Its deep, seamlessly integrated bass lends heft and scale without overpowering the soundbar, resulting in a natural, cohesive sound.

Naturally it also brings these qualities to TV shows, making everything from talk shows to drama series sound clear and weighty.

But the big surprise is how musical the YSP-2500 sounds. It’s no match for a proper hi-fi system, nor does it claim to be, but its clear, detailed rendition of George Benson’s The Changing World still gives us goose bumps. The 16 drivers create a spacious stereo stage with decent imaging and placement, while clear midrange and high frequencies are expertly married to subtle bass depth from the sub. 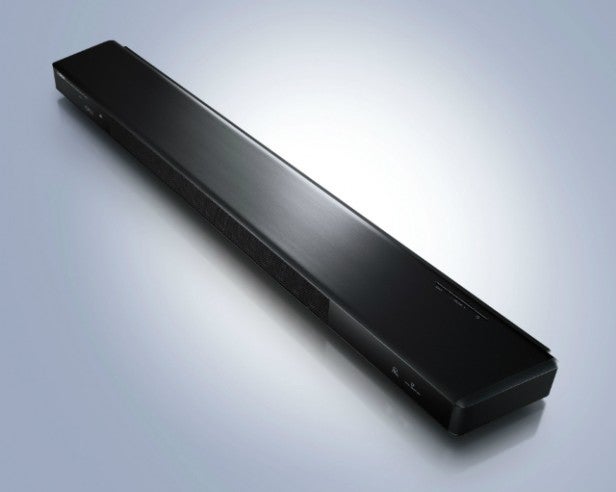 The YSP-2500 is one of the most accomplished soundbars we’ve heard at this price, and as such demands a place on your shopping list. Not only is it packed with more features and connections than any similarly priced soundbar, but it’s also one of the few to deliver a realistic surround experience.

Provided your room layout is suitable, the sound beam technology creates an enveloping soundstage by pinging effects off the walls, while its attacking tone, clear detail and seamlessly integrated bass guarantee entertainment. If you want immersive home cinema sound without clutter, the YSP-2500 is the ideal choice.

Yamaha’s fantastic soundbar delivers home cinema thrills like no other, while a packed feature list and killer design seal the deal.