Yamaha’s budget RX-V371 proved that you don’t have to pay through the nose for a decent amp, although with some missing features and sound quality issues it stopped short of greatness.

So if you’re a little more serious about your home cinema sound – and have more cash to spend, of course – you’ll need to look further up Yamaha’s range, where you’ll find the RX-V671, a 7.1-channel network-enabled model with greater power and better features.

In terms of looks Yamaha hasn’t done much to distinguish the V671 from its other models past and present, but why tamper with a winning formula? The sleek black styling and angled lines have served the company well over the years and they work again here. Build quality is excellent too, with bodywork that’s every bit as sturdy and rigid as you’d expect for the money.

The fascia is dashed with buttons controlling everything from input selection to sound modes. Four of these, labelled BD, TV, CD and Radio, relate to the Scene function, which switches the unit to the relevant input and selects the correct settings at the touch of a button.

You’ll also find several inputs, including USB, HDMI, composite video and analogue stereo, plus a headphone output (which uses Yamaha’s Silent Cinema feature). We like the dot matrix display, which uses large digits instead of hard-to-see icons like some amps. And at the risk of sounding like Sid James, we always like to see a nice big knob and Yamaha duly obliges with a chunky volume dial.

The back panel is teeming with sockets. Five more HDMI inputs take the total to six, and they’re all 3D-ready (including the ARC-compatible output). Other inputs include component (x 2), composite (x 4), S-video, digital audio (x 4 – 2 x optical and 2 x coaxial) and analogue stereo (5, including 1 x phono). Outputs include component video, composite (x 2), analogue stereo (x 2), stereo Zone 2 and a subwoofer pre-out. Bear in mind that there are no multichannel analogue inputs, which means 7.1 Blu-ray signals can only be fed in digitally.

The RX-V671’s headline feature is its DLNA-certified networking functionality, allowing you to stream music from a variety of sources including vTuner internet radio, Napster and PCs on your home network.

For the latter, supported files include MP3, WMA, AAC, WAV and FLAC, which should cover most people’s digital libraries. Sadly there’s no AirPlay support, but the optional YID-W10 wireless iPod/iPhone system does virtually the same job. Apple devices and memory sticks can also be connected to the front mounted USB port.

As an added bonus you can control the RX-V671 with a smartphone over your network with Yamaha’s AV Controller app. All of these network functions rely on the Ethernet connection as there’s no Wi-Fi support.

And as per usual Yamaha has gone overboard on the DSP modes – its CINEMA DSP 3D offers no less that 17 programs, all lending different characteristics to suit various movie and music genres, with overly specific names like ‘Concert Hall in Berlin’. Other tech, like Dialogue Lift, Virtual Cinema and Compressed Music Enhancer helps you get the best out of whatever you’re listening to.

The RX-V671 also supports an extra pair of ‘Presence’ speakers, which need to be connected to the dedicated springclips on the back and positioned outside the front speakers about 1.8m from the floor. Using the on-board DSP processing, these speakers supplement the sound from the front speakers with extra ambient effects. Additionally the Virtual Presence Speaker mode aims to achieve the same effect without using extra speakers.

If you’d rather enjoy soundtracks straight-up you can bypass these modes. And as you’d expect the Yamaha is fully equipped to handle Blu-ray audio formats like Dolby True HD and DTS HD Master Audio, while its output power is rated at 7 x 90W.

Any video sources you have running through the RX-V671 can be upscaled to 1080p, plus the video processors offers motion adaptive/edge adaptive deinterlacing and 3-2 pulldown detection where required.

Unlike the RX-V371, the RX-V671 features onscreen menu system, which just happens to be one of the best we’ve seen. Superimposed over an image of a grand piano, the colour menus use cute illustrations for each section of the menu, while the layout is simple and intuitive.

The Setup menu covers every minute detail, including input assignment, sound modes, video preferences, HDMI options and much more. Even though the options are fairly in-depth, this colourful friendly presentation eases you in gently. 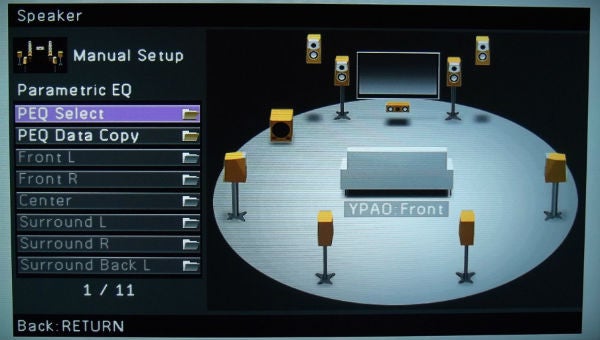 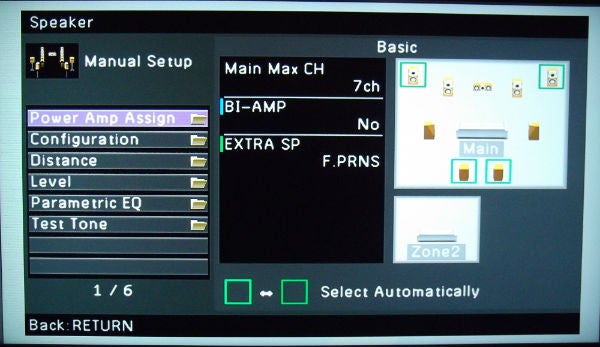 During setup, the YPAO auto speaker setup feature makes it easy to get the optimum sound quality. The microphone measures test tones from the receiver and then sets the audio parameters accordingly, taking room acoustics into account. If you’re feeling brave you can do this manually using the incredibly detailed tweaks in the setup menu.

Furthermore, separate Options and Display menus (which have their own buttons on the remote) provide quick access to often used functions. Napster and the DLNA streaming displays are easy on the eye, using attractive icons and showing cover art where available.

It’s just a shame that Yamaha didn’t lavish a little more care and attention on the remote. It’s nicely shaped, but packed from corner to corner with microscopic buttons, making it fiddly to use. The clutter also makes lesser-used buttons tricky to find, although to its credit the volume and menu control keys are conveniently placed.

One word: wow. Sweeping away any doubts caused by the RX-V371’s shortcomings, the RX-V671 turns in a sensational performance. The sound is atmospheric and breathtakingly exciting thanks to its attacking nature and expertly steered effects, but it’s backed up by real finesse in the high frequencies and an easy tone that doesn’t leave your ears reeling.

The Star Wars trilogy on Blu-ray provided all the evidence we need – Empire’s battle of Hoth is a maelstrom of sharp, punchy laser blasts, taut explosions and crisply-rendered spacecraft effects that sweep seamlessly around the soundstage.

Jedi’s fight between Luke and the Rancor plays out with all the drama and tension it deserves, while the iconic score is reproduced throughout the movie with all its majesty intact.

Quieter moments reveal the RX-V671’s impressive insight, easily drawing out the ambience and distant noises on Dagobah, plus dialogue is always clear. For the money, this Yamaha really is hard to fault.

It’s equally impressive when given a CD to chew over – the stereo imaging is surprisingly accomplished for a multichannel amp, while smooth highs and an overall lack of muddiness in the mix left us feeling privileged to be its company.

Verdict
The RX-V671 is a remarkably good receiver that poses a real threat to our current champion, the similarly-priced Onkyo TX-NR609. The Yamaha’s skills with a Blu-ray soundtrack are top-drawer, plus the friendly, logical user interface makes it a breeze to operate and build quality is superb.

Connections are plentiful too and network functionality is always welcome, although the lack of AirPlay and built-in wireless streaming might put one or two people off.

As an overall package the Onkyo still gets the nod due to its superior feature list, but Yamaha certainly matches it pound for pound in the performance stakes and you won’t be disappointed if you decide to give it a whirl.