The RX-S600 is the black sheep of Yamaha’s line-up and doesn’t really belong to any particular series, but in terms of looks and spec it’s most closely aligned with the V75 range. An alternative version, RX-S600D, comes equipped with a DAB radio tuner, but it’s otherwise identical.

The feature list is excellent. Fans of network music streaming will be in their element – AirPlay, DLNA 1.5, internet radio and Spotify, the latter requiring a firmware update, the Spotify Connect App and a premium account (you get a free 30-day trial with this receiver).

Spec-wise it’s a discrete five-channel affair that musters 60W per channel (two channels driven) and decodes every flavour of DTS and Dolby (including DTS HD Master Audio and Dolby True HD of course). In terms of processing you can expect Dolby Pro Logic II, IIx and DTS Neo:6. 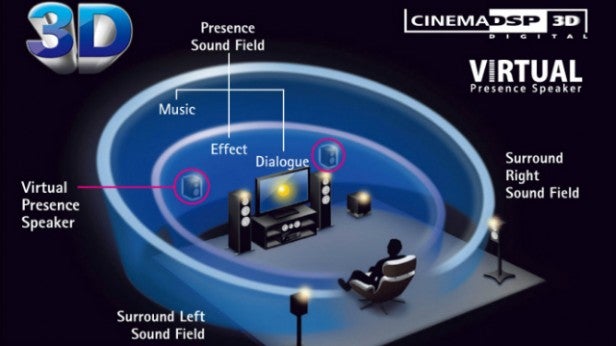 Meanwhile, Yamaha’s CINEMA DSP 3D aims to expand the sound upwards and outwards, with a Virtual Presence Speaker function replicating the effect of front height speakers without actually having them in the room.

There are 17 DSP modes with names like Adventure, Drama and Sports, plus and SILENT CINEMA for enhancing movie playback through headphones. Compressed music enhancer boosts the quality of music formats like MP3 and WMA.

Elsewhere the USB port charges and plays music from iPod, iPhone and iPad, as well as USB drives. Hi-res audio is big news at the moment so it’s pleasing to discover that the Yamaha plays FLAC and WAV files up to 192kHz/24-bit, plus MP3, AAC and WMA. You can also stream these over a network.

The RX-S600 is generally slick and cooperative, particularly when you take advantage of Yamaha’s free smartphone/tablet control app, but the onscreen menu leaves a lot to be desired.

Not only is it too small, using miniscule lettering that’ll trouble myopic users, but it’s also rudimentary. The basic icons, fonts and boxes are like something you might see on an old LCD PC monitor, but at least it’s responsive and easy to follow.

There’s a lot to explore too, including detailed speaker configuration settings, while a separate Option menu pops up over the picture and allows you to tweak tone, DSP modes and audio inputs.

The quickest and easiest way to configure the sound is to employ the YPAO (Yamaha Parametric room Acoustic Optimiser) system. This works like most other auto setup modes, using a microphone to measure test tones then setting the distances and speaker sizes and analysing room acoustics. You can check the settings afterwards in the setup menu, something we’d recommend as no system is perfect.

With so many functions to control, AV receiver remotes are hard to get right but Yamaha just about succeeds. This zapper is well-made and stylishly dressed in silver and gloss black, giving all the important keys room to breathe. On the downside most of the buttons are rather small, which makes the printed lettering look microscopic, plus there are too many keys crammed into the bottom section.

It’s a decent remote, but you’re better off using Yamaha’s AV Controller app for iOS and Android devices. It looks funky and works like a dream, offering a smoother and more rewarding operating experience than the physical remote. You can use it to adjust volume, switch inputs and DSP modes or turn power on and off.