What is the Xiaomi Redmi S2?

Chinese firm Xiaomi is famed for its low-priced and highly competitive smartphones, and its Redmi range of devices has traditionally led its budget charge. The Redmi S2 is the latest member of this growing family and comes hot on the heels of the Redmi Note 5, another bargain-basement marvel.

It’s blessed with a 5.99-inch HD display, Qualcomm Snapdragon 625 chipset, 3GB of RAM and – in its base configuration – 32GB of storage which can be expanded using MicroSD cards. It offers some premium features such as a fast and accurate fingerprint scanner, dual cameras for realistic ‘bokeh’ effects, and a 16-megapixel selfie camera complete with LED flash. However, it lacks key options such as fast and wireless charging, water-resistance and NFC support.

The Redmi S2’s predominantly plastic design is somewhat at odds with the good work the company has been doing recently when it comes to premium materials. It feels a bit cheap and nasty when compared to the metal bodywork of the Redmi Note 5 and Redmi 5, and the antenna lines at the top and bottom of the device make it look like an unfinished pre-production prototype.

On the plus side, the overall design is appealing, with the device sporting nicely rounded edges and a good contrast between the screen and the frame.

On the right-hand side of the phone you’ll find the volume rocker and power button, while the left-hand side is home to the SIM card tray. In a neat twist this has space for two nano-SIM cards and a microSD card, so you don’t have to give up one of those nano-SIM slots to expand the phone’s storage. 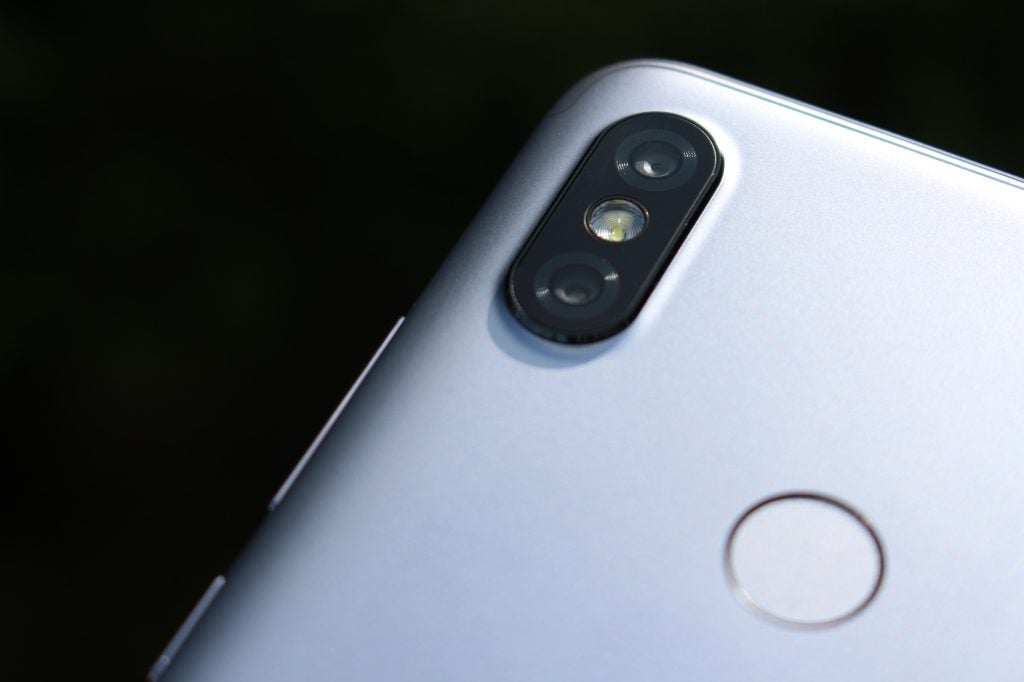 Along the top edge is a 3.5mm headphone socket, IR blaster and noise-cancelling microphone, while on the bottom edge you’ll find the in-call mic, mono speaker and micro-USB port.

Xiaomi has embraced USB Type-C with its flagship devices but, sadly, continues to use the older connection standard on its cheaper devices. Hopefully, the Redmi S2 will be the last example of this. On the rear of the handset you’ll find a fast and accurate fingerprint scanner, as well as the iPhone X-style camera cluster. 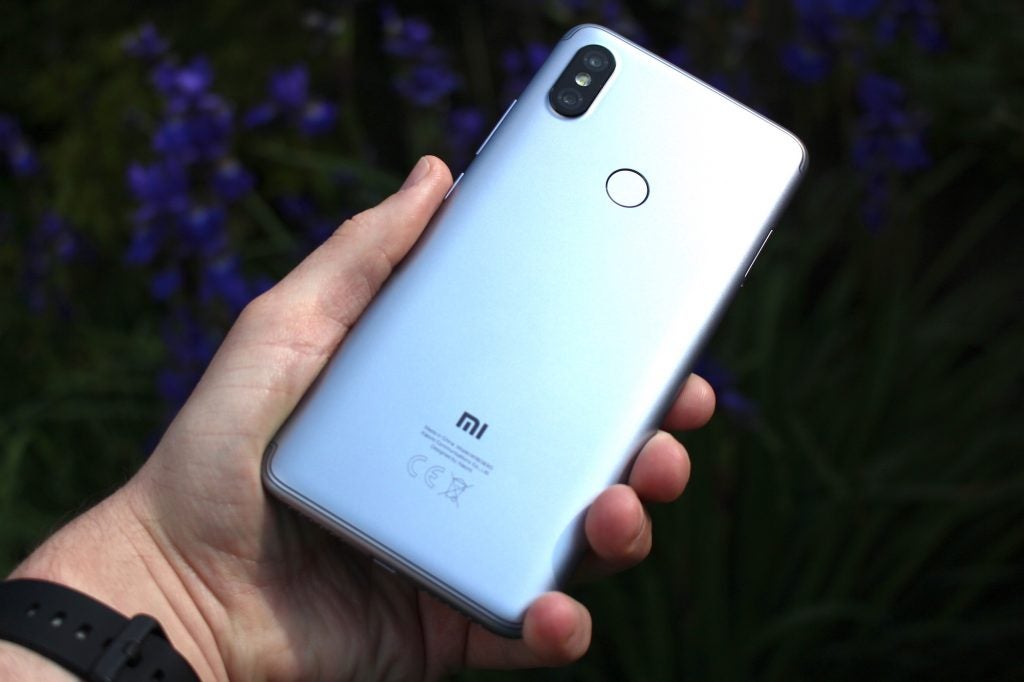 The phone’s 5.99-inch IPS display has a resolution of 1440 x 720 pixels, which means things can look quite blocky at times. The panel itself is lacking punch, and viewing angles could be better.

We’ve certainly seen more impressive screens in the budget sector, but it does the job. While it boasts an in-vogue 18:9 widescreen aspect ratio, there are some quite pronounced bezels at the top and bottom of the display. 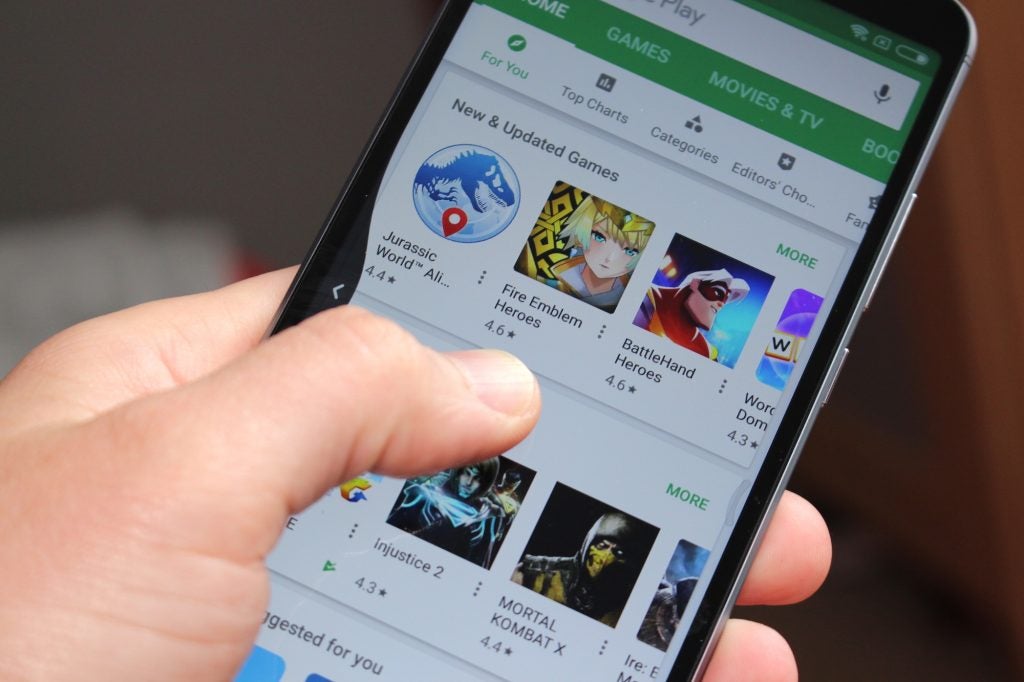 The top bezel naturally gives the front-facing camera, earpiece and front-facing LED flash somewhere to reside, but the bottom bezel contains absolutely nothing; you’d think Xiaomi would have at least utilised this area for some capacitive buttons, but no.

The Redmi S2 is packing Xiaomi’s custom MIUI 9.5 skin, which sits atop Google’s Android 8.1 operating system. MIUI mixes the best elements of iOS and Android to good effect, while introducing some welcome features of its own.

For example, ‘Second Space’ allows you to install a second iteration of the same app with different sign-in credentials, which is handy for those of you who run more than one account on social networking platforms. The ‘Quick Ball’ system is also useful; it allows you to access shortcuts to various vital functions effortlessly.

Xiaomi has taken a page out of Apple’s book with its ‘Full Screen’ option, which removes the traditional Android commands of Back, Home and Apps and replaces them with gestures. To go to your homescreen, you swipe up from the bottom, while ‘Back’ is executed by swiping from either side of the screen. To view your active apps you swipe up and hold your finger on the display.

These gestures are optional, but we think they work really well – and once you’re used to them, it’s hard to go back to the old on-screen buttons. 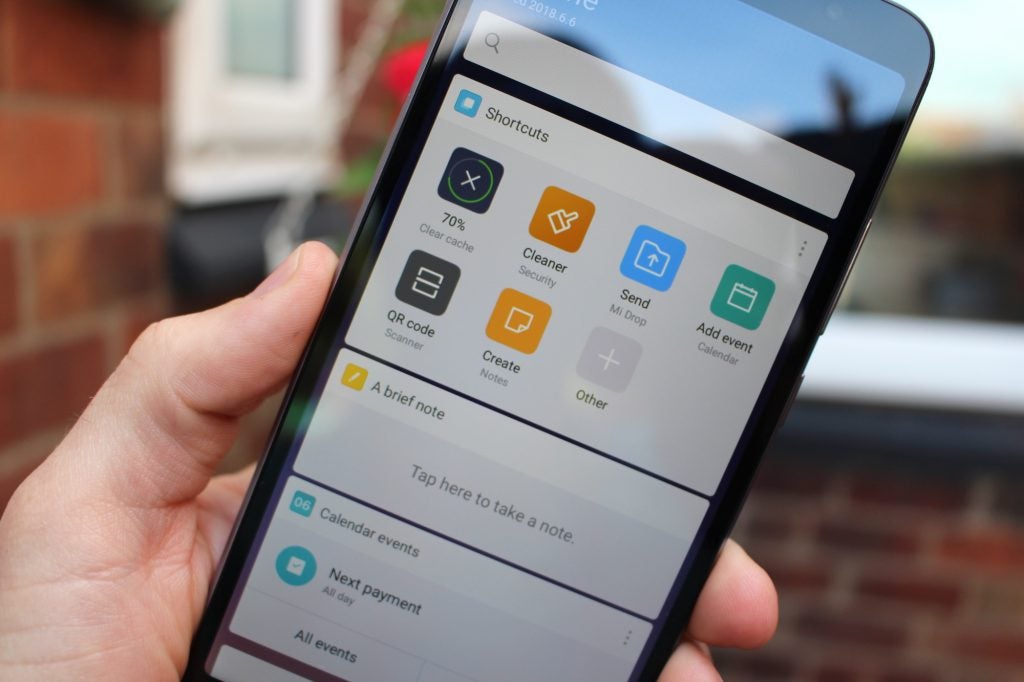 Since the unit I’m reviewing is the Global version, it comes with Google services installed – something that isn’t normally the case with Xiaomi handsets intended for the Chinese market. That means you don’t have to go through the usual rigmarole of installing Google support manually, and none of the UI is in Chinese, either.

The global version of the Redmi S2 supports multiple languages and can be used almost anywhere in the world, thanks to its wide support for international mobile network bands.

Outside of offering plenty of different Google apps (most of which you’ll already be using if you’re a seasoned Android fan), Xiaomi has included a few other items out-of-the-box. Microsoft’s suite of Android apps is installed as standard and can, thankfully, be removed to free up space.

Elsewhere, there’s a remote control app to use with the IR blaster, which allows you to control various appliances with your phone, and Xiaomi’s Security and Cleaner apps are present and correct, too. All in all, the device is quite light when it comes to bloatware, which is welcome. 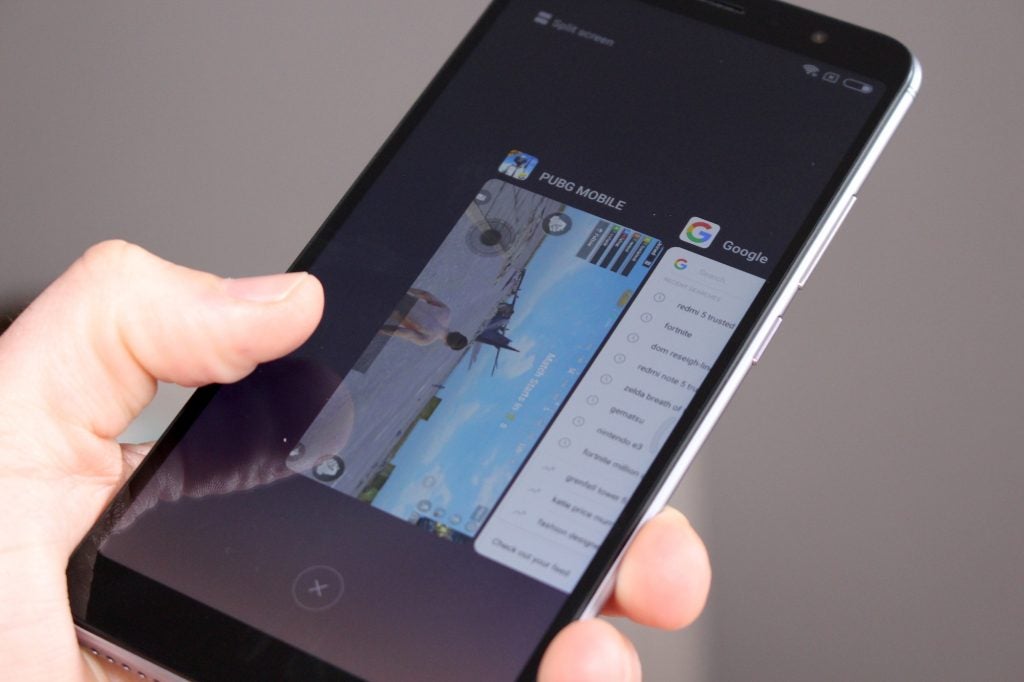 Xiaomi must be a fan of Qualcomm’s low-cost Snapdragon 625 chipset, since it has utilised it in several different phones of late. While it doesn’t offer blistering performance when set alongside Android flagships of 2018 – many of which are packing the superior Snapdragon 845 – there’s enough raw power on tap here to satisfy most casual smartphone users.

Moving between apps can sometimes cause a bit of stuttering, and on occasion there are animation delays when performing certain tasks. In general, however, the phone is fast and responsive. Intense 3D games struggle a little, but never to the point where they’re rendered unplayable.

We’re seeing more and more phones adopt a stereo speaker setup but, sadly, at the budget end of the spectrum this is less common. In the case of the Redmi S2, there’s a single speaker on the bottom edge that offers a decent level of volume and middling bass.

And because it’s on the bottom edge and is angled upwards, it’s easy enough to hear in crowded environments – provided you’re not one of those strange people who puts their phone into their pocket bottom-end first, that is. Unlike a lot of modern handsets the Redmi S2 retains the 3.5 headphone socket, which is a bonus for anyone who hasn’t upgraded to Bluetooth cans yet. 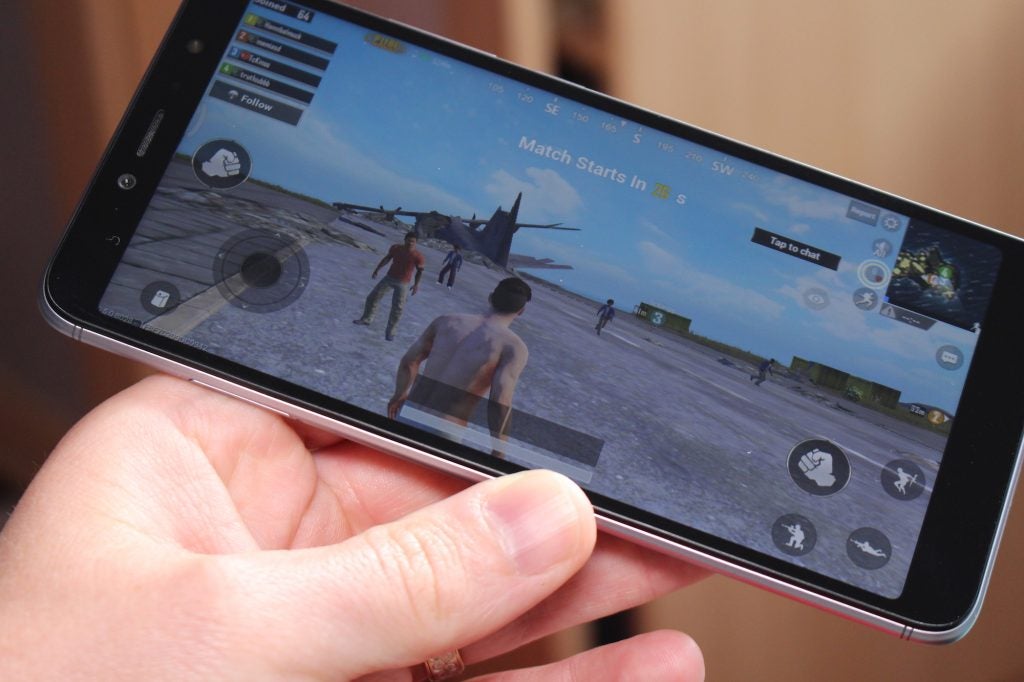 Call quality is generally good, with the second noise-cancelling mic doing a decent job of removing ambient sound from your end of the conversation. The in-call speaker is also loud and clear.

The Redmi S2’s camera bump certainly calls to mind the iPhone X, which is no bad thing if you appreciate Apple’s design work – and goodness knows, Xiaomi sure does.

It houses a 12-megapixel Sony-made snapper with a 5-megapixel secondary camera that allows it to perform convincing ‘Portrait’-style photos with bokeh effects. Nestled in the middle of these two cameras is a single LED flash. Sadly, there’s no fancy dual-tone flash here. 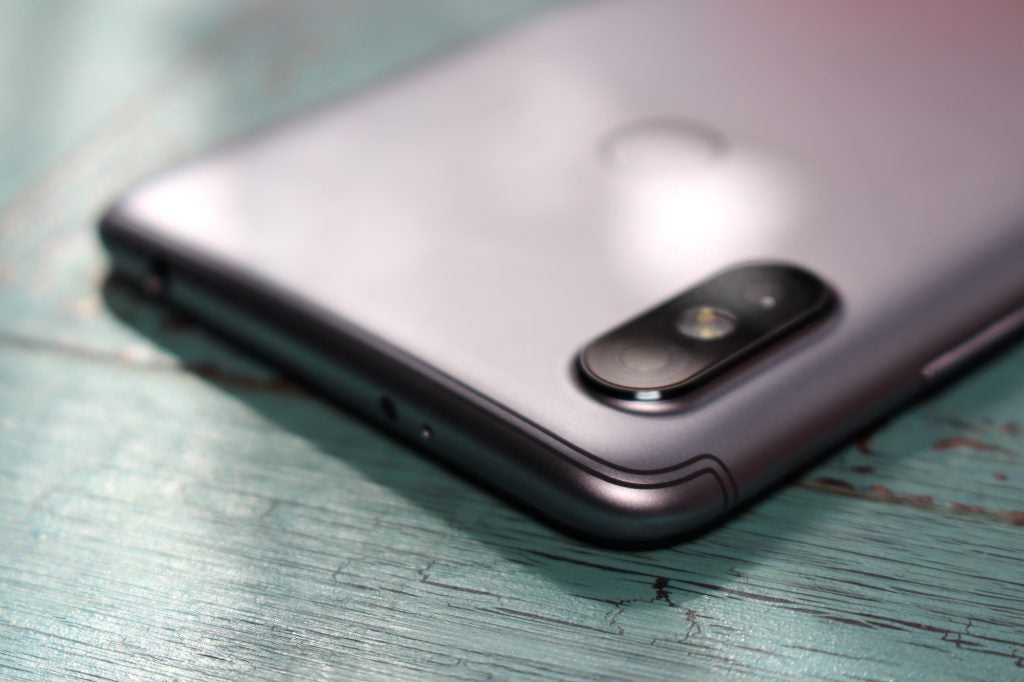 Given the cost of the phone, it’s hard to be disappointed by the quality of the shots. With HDR deployed, the Redmi S2 is capable of taking some striking photos, and the bokeh mode works really well.

Xiaomi claims that the phone’s cameras are AI-powered and will capture better images as a result, and we’re inclined to agree. The front-facing camera is a 16-megapixel sensor that has its own LED flash. This takes good shots as well, but they do tend to look a little washed-out in bright environments.

You can apply bokeh effects to selfies as well, but they’re done in software and often don’t come out quite as well as those taken with the dual-camera configuration on the rear of the phone. 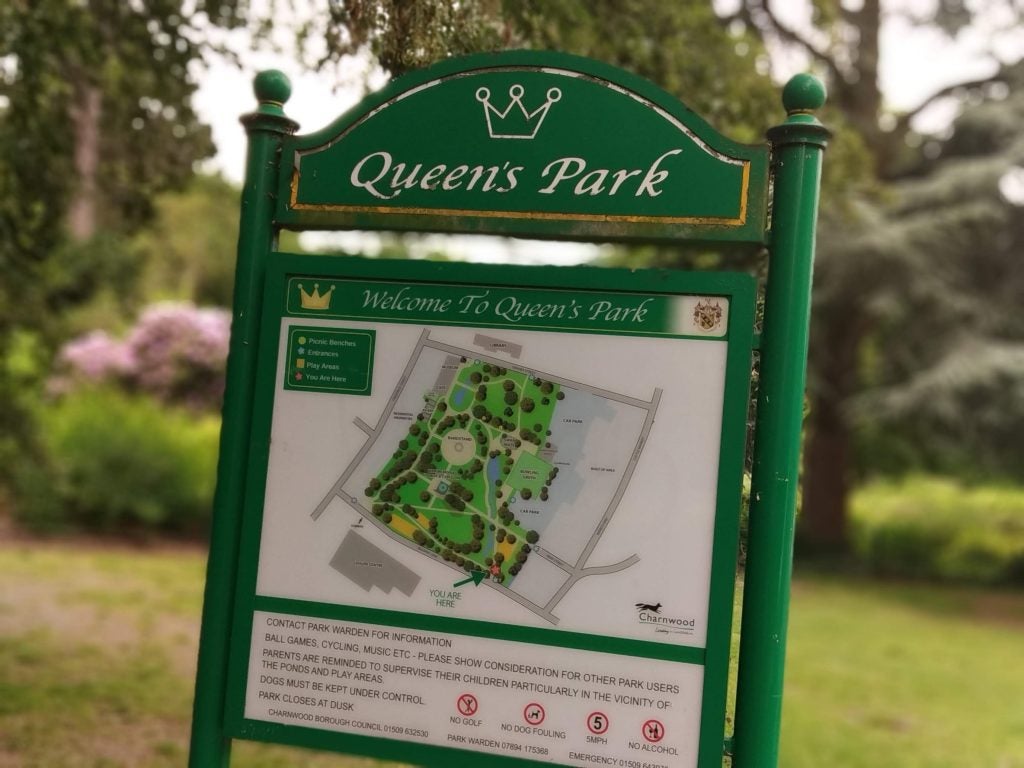 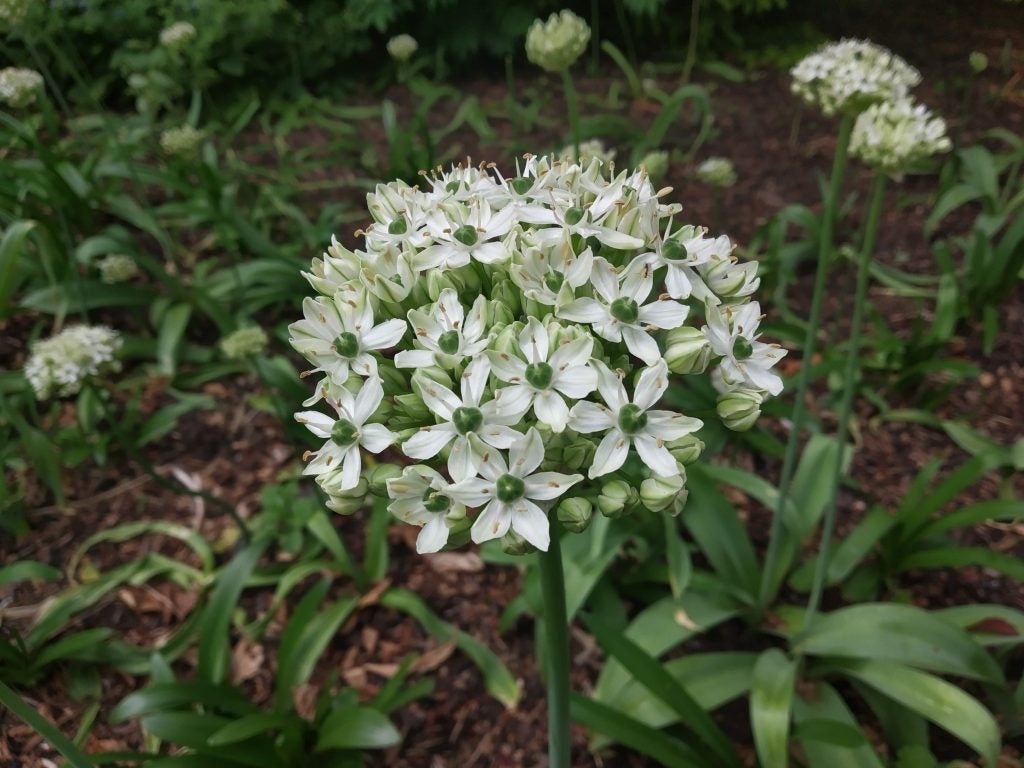 Detail can be quite good 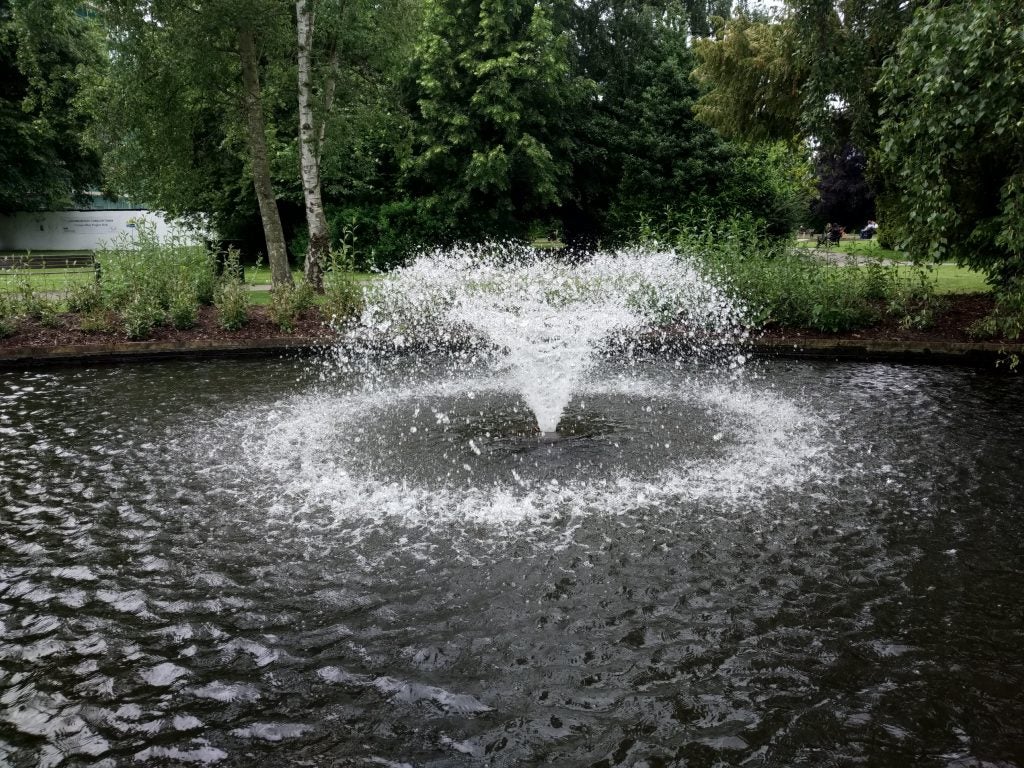 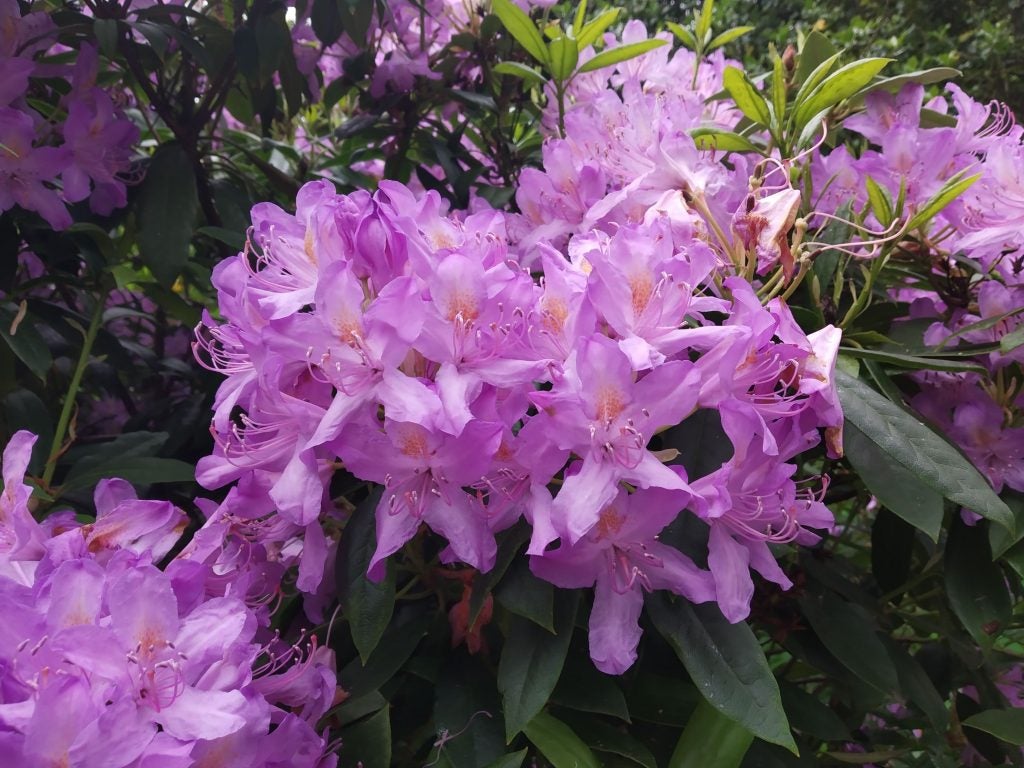 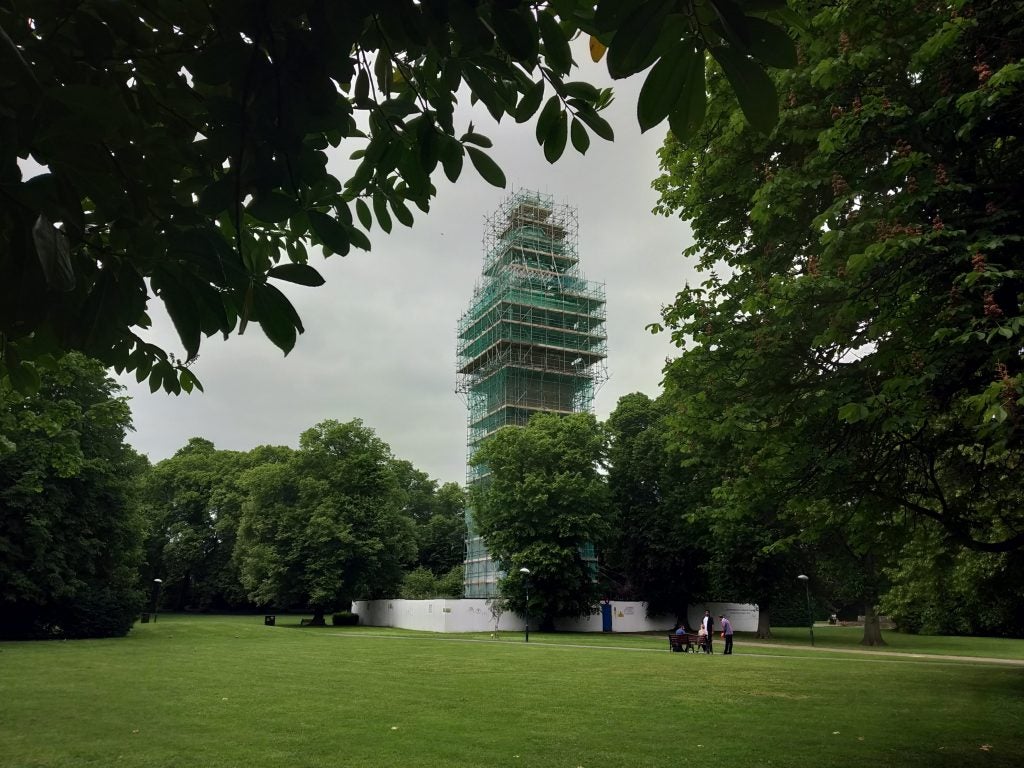 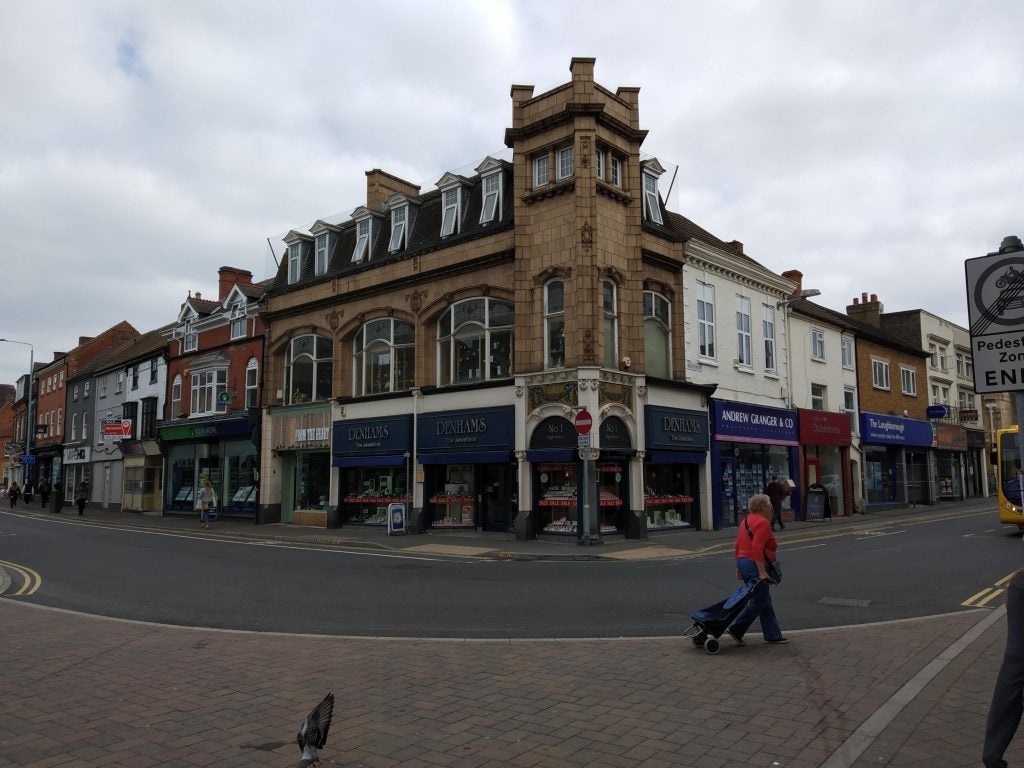 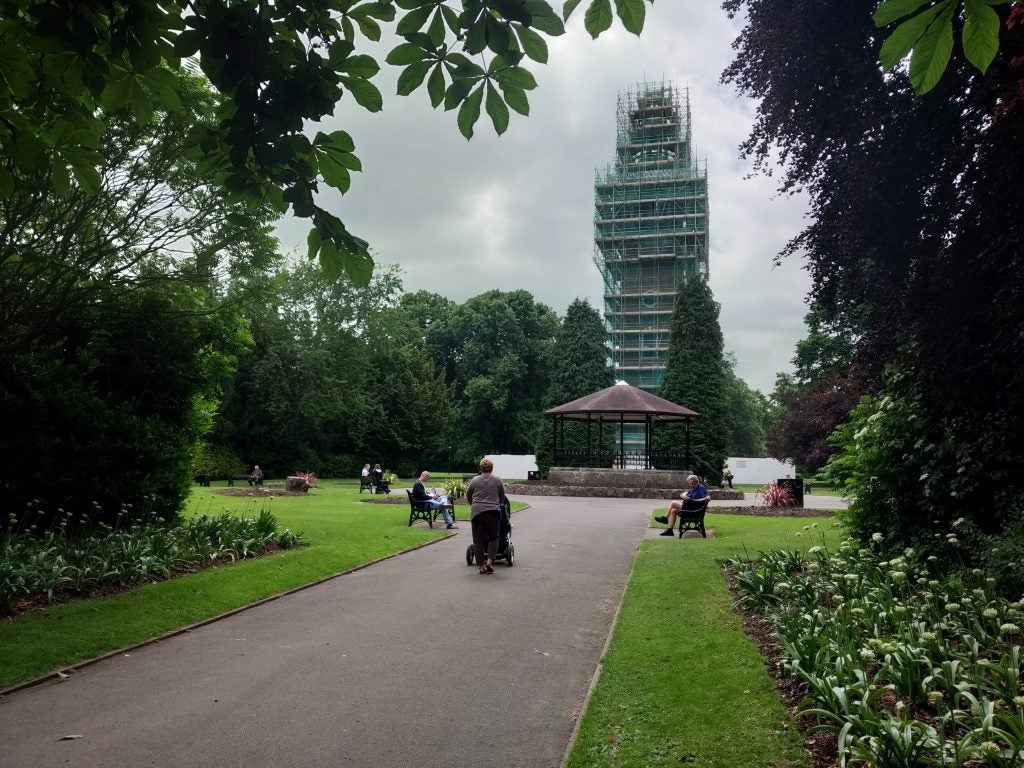 While the default camera app only allows you to shoot video at 1080p, the Redmi S2 is in fact capable of recording 4K video – you’ll need to install a third-party camera app from the Google Play store to access this feature, but it’s definitely there. Thanks to Electronic Image Stabilisation, 4K video is smooth and free from judder. In fact, the quality is so surprising we almost can’t believe it’s coming from a phone that costs £130.

Despite its imposing dimensions, the Redmi S2 is equipped with only a 3080mAh battery, which seems quite meagre for a phone with a screen size of almost 6 inches. Still, the low-resolution screen and modest chipset mean that you’ll get well over a full day of use out of a single charge – we even managed to hit two days of moderate usage at one point.

This longevity is a blessing because the Redmi S2 comes with no fast-charging capabilities, so it takes a while to get the battery up to 100%. It goes without saying that wireless charging is also absent. 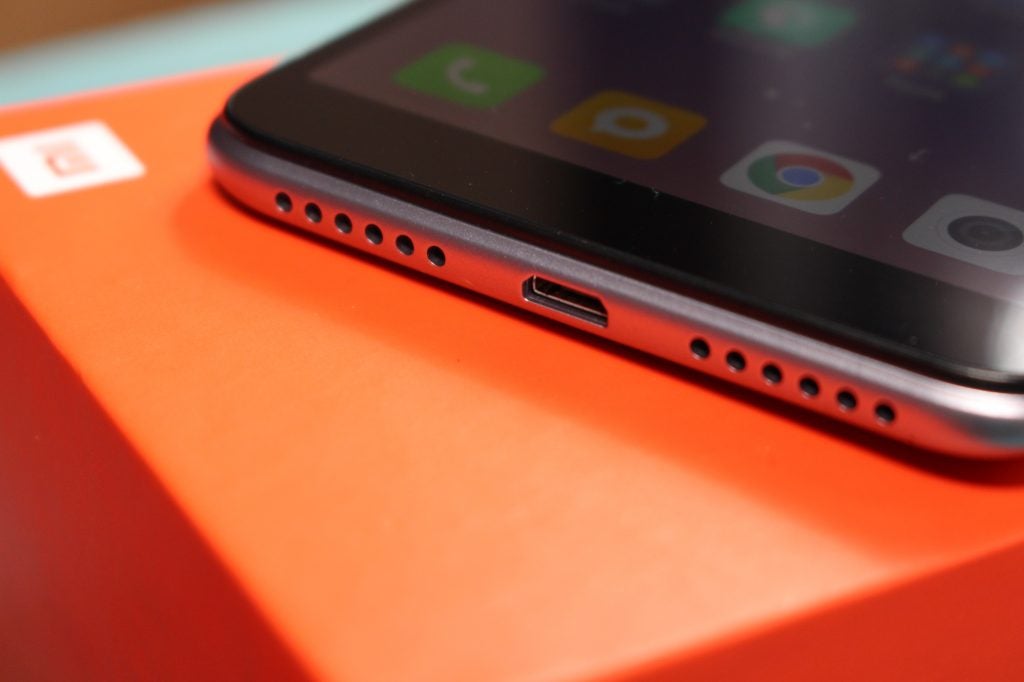 There’s 32GB of storage in the base model, of which the end user has access to around 25GB. You can use microSD cards to boost this total, and because the SIM tray has a dedicated slot for such a card, you don’t need to give up one of your precious nano-SIM slots. 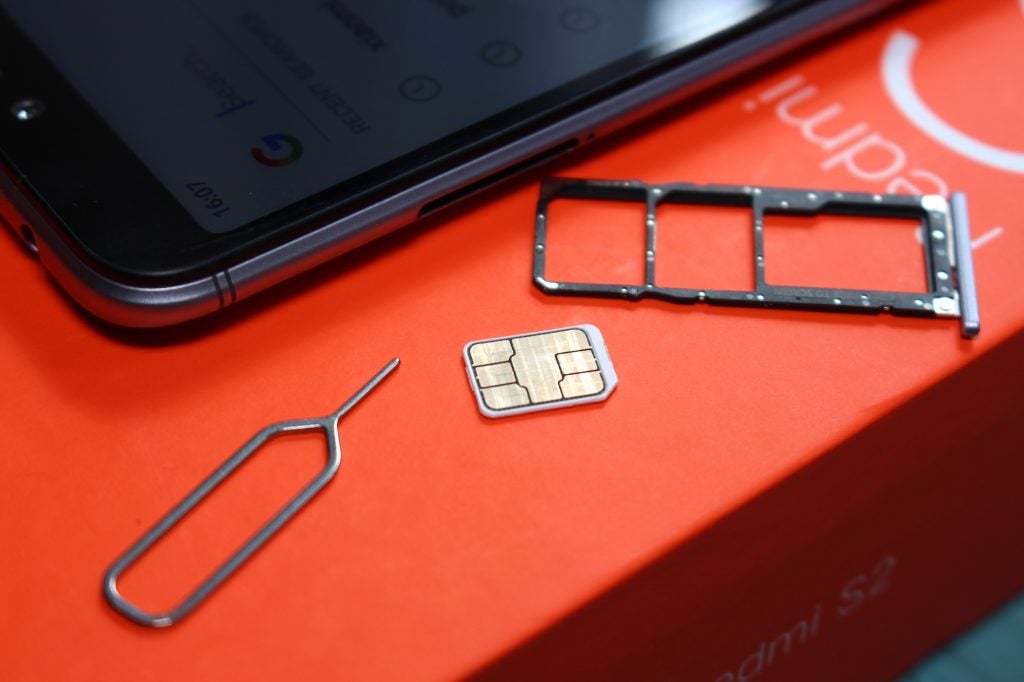 Why but the Xiaomi Redmi S2?

For £130, the Redmi S2 is a real steal. There are aspects that could be better – the screen is weak and the lack of USB Type-C support is downright puzzling – but it offers a decent level of processing power, excellent photographic capabilities, good stamina and up-to-date software, all wrapped in a moderately attractive package.

The biggest question when approaching the Redmi S2 is whether you should pick it over some of Xiaomi’s other budget devices, such as the more attractive Redmi Note 5.

Xiaomi’s assault on the budget sector shows no signs of letting up, and the Redmi S2 is the perfect phone for anyone shopping on a shoestring. To hit that low price point the Chinese firm has been forced to make plenty of concessions, so there’s no NFC, waterproofing, fast-charging or even a true HD display, but the camera setup is excellent and it’s running Android Oreo to boot.

The icing on the cake is that the global version available from retailers such as Gearbest has Google apps installed as standard, so you don’t need to mess around flashing a new ROM to the phone before you can use it.

The Redmi S2 might not be the best budget blower Xiaomi has released in 2018, but it remains worthy of consideration.

The Redmi S2 is fully compatible with EU mobile networks, but isn’t officially available in the UK at the time of writing. You can order it from online stores such as Gearbest for around £130.