Big graphics hardware releases can often fall foul of two stumbling blocks – either the card doesn’t live up to the pre-release hype, or the hardware is super fast and exceeds expectations, but there’s no stock available for anyone to buy. Thankfully nVidia made sure that the GeForce 7800 GTX avoided both these pitfalls, and not only is it the fastest graphics card on the planet, it was also available in the retail channel from day one.


So, less than two weeks after the initial launch of the GeForce 7800 GTX, I’m writing this review of the XFX retail card. In fact I got the boards (XFX sent me two for SLi testing) just over a week after the launch, but I wanted to have a good play with them before writing up this review, so I made you wait a little while.


Unless you’ve been hiding in a cave for the past couple of weeks, you’re probably pretty familiar with the 7800 GTX specs, but in case you’re a bear and have just come out of hibernation I’ll give you a bit of background. 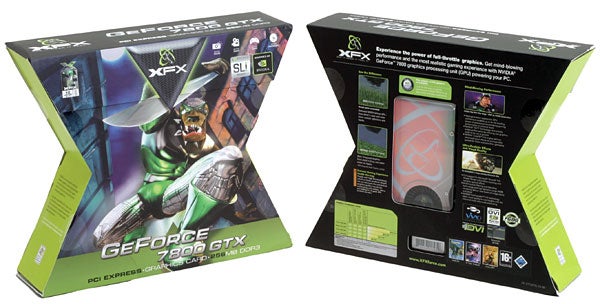 The GeForce 7800 GTX is nVidia’s new high-end graphics chipset, replacing the previous king of the hill, the GeForce 6800 Ultra. Now, the 6800 Ultra was a massive step forward when it was released just over a year ago, raising the transistor count to a heady 222 million, but the 7800 GTX smashes that landmark with an unbelievable 302 million transistors! The extra transistor count has helped nVidia raise the pixel pipelines from 16 to 24, while the vertex pipes have also increased from six to eight. nVidia has also opted to stick with the tried and tested 0.11 micron manufacturing process, rather than dropping down to a 90nm model, which could be the reason that yield is high straight off the bat.


The standard core speed of the 7800 GTX is 430MHz, which is an improvement over the standard core speed of the 6800 Ultra, which was 400MHz. However, many board partners clocked their retail 6800 Ultra cards faster than 400MHz, and it looks like the same is going to be true with the 7800 GTX. XFX clearly thinks that the standard specs just aren’t fast enough and has clocked the core of its card at 450MHz. Likewise XFX has bumped up the memory speed slightly, with the 256MB of GDDR3 memory running at 625MHz (1.25GHz effective) instead of the standard 600MHz (1.2GHz effective). Coupled with the 256-bit memory interface, the XFX card should produce memory bandwidth of 40GB/sec compared to the 38.4GB/sec offered by the stock nVidia settings.

Although nVidia recommends a 500W power supply for running two GeForce 7800 GTX cards in SLi, I think that our green friends are definitely erring on the side of caution. Obviously the quality of the power supply comes into the equation, because the 460W Tagen power supply in the TrustedReviews graphics card test rig had no problems handling a pair of cards.


One criticism that was laid at the 6800 Ultra when it launched was the fact that it took up two slots inside your PC – a fact that was made worse when ATI launched its X800 cards in single slot form factor. Thankfully nVidia has learned from its earlier experience and the 7800 GTX is a single slot card, albeit a very long one. The 7800 GTX also seems to run both quieter and cooler than the 6800 Ultra. 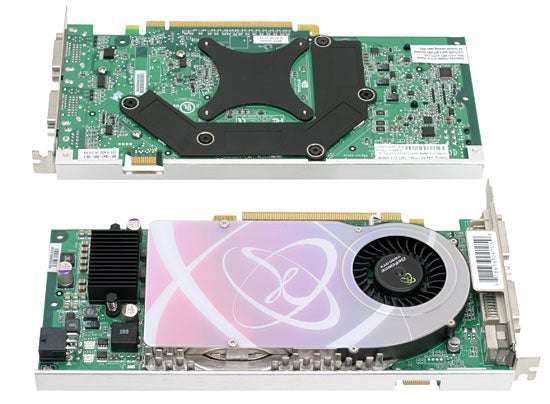 Now, don’t expect to see a plethora of different designs when you’re looking to buy a GeForce 7800 GTX card, since most board partners have just gone with the nVidia reference design, XFX included. It’s more likely that the differentiator between boards will be the clock speeds (as seen here) and the bundle that you get.


What you’re sure to get is dual DVI connectors, since this is part of the reference design. This is a great feature on any card and allows you to connect two LCD screens up digitally, for the best combination of desktop real estate and image quality. However, if your LCD only has an analogue connector, or if you want to use a CRT monitor, XFX has supplied two DVI to D-SUB converters in the box. If you’re wondering why anyone would want to connect a card like this to an old technology CRT monitor, keep reading and all will become clear.


Taking a look at monitors for a minute, the average PC user with a decent setup is probably using a 17in or 19in LCD screen with a resolution of 1,280 x 1,024. A true enthusiast user may have forked out the extra cash for a 1,600 x 1,200 20in or 21in LCD screen, while the totally loaded enthusiast may have treated himself to a 23in or 24in widescreen LCD with a resolution of 1,920 x 1,440. But the problem with all those screens, even the top end 24in widescreen display, is that they can’t produce a high enough resolution to do these cards justice.

When I tested these cards I had to drag out a large screen CRT monitor, since even when benchmarking a single card it didn’t really start to break a sweat until I cranked the resolution up to 1,920 x 1,440. But when it comes to running two cards in SLi, even a resolution of 2,048 x 1,536 didn’t seem to cause any problems.


Let’s take a look at Half-Life 2 first. Here you can see that the cards are CPU limited in the lower resolutions. You can also see that there is a slight CPU overhead when running SLi, as the single card scores are actually higher at the lower resolution. Looking at the SLi scores you’ll see that the frame rate doesn’t drop below 100fps until you push the settings up to 1,920 x 1,440 with 4x FSAA enabled, and even then you’re still getting 95fps. Even running a single card you’re getting 66fps at the same resolution of 1,920 x 1,440 with 4x FSAA. But when you crank things up to 2,048 x 1,440 you start to see where the extra money you spent on an SLi solution is going – at this super-high resolution with 4x FSAA and 8x AF you’re still getting 68fps. 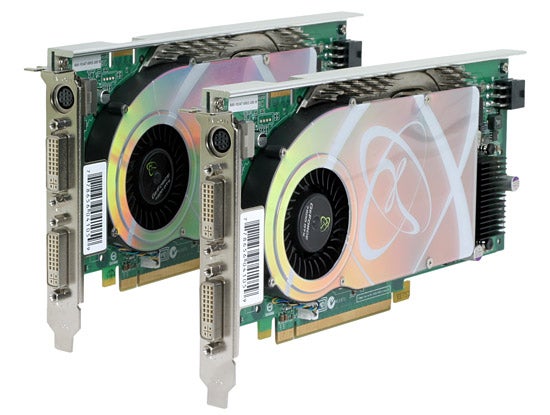 Of course I had to try out this setting, so I fired up Counter Strike: Source and started playing at 2,048 x 1,536 with 4x FSAA and 8x AF. The result was truly staggering, and I didn’t seem to suffer any major frame rate drops. Of course I had to tell everyone on the server what settings I was running, but no one believed me!


Loading up Far Cry showed a similar situation, but the most amazing observation is that the two cards in SLi were CPU limited all the way up to 2,048 x 1,536 if you run without FSAA or AF enabled – 1,024 x 768 scored 96.17fps while 2,048 x 1,536 scored 94.82fps. Even when switching on FSAA and AF, the SLi setup didn’t drop below 90fps until I hit 1,920 x 1,440 with 4x FSAA. Far Cry is definitely still a pretty demanding engine, because running a single card showed the frame rate dropping to 62fps at 1,600 x 1,200 with 4x FSAA and 8x AF. If you want to push the resolution higher than this, you’re going to have to turn the image quality settings off, but you will be rewarded with a silky smooth frame rate.

Since I had a GeForce 7800 GTX SLi setup, I thought I might as well have a little play with the HDR lighting on Far Cry. Even pushing the resolution all the way up and setting the HDR at level seven produced a smooth enough frame rate for play. It has to be said that there are instances where the HDR effects are stunning, particularly the bits that nVidia likes to show off – looking up through a hole in the roof while underground for example. However, I do find the effects – in Far Cry at least – somewhat flawed. The idea that I would get some kind of over saturated white out from the reflection of light on a wall seems a little unlikely to me. Also, although the idea of an image coming into focus as your eyes get used to the light is pretty cool, taking two steps backward shouldn’t then white it out again.


To be fair though, HDR in Far Cry was bolted on after the coding had been finished and the game released, so it’s probably not a perfect implementation. It does give you an idea of how good the lighting effects could be in future titles though. It also gives you something to do with cards like this if you don’t want to, or can’t push up to the silly resolutions that I’ve been testing with.

When nVidia released information to the Press before the launch of the 7800 GTX, it included some benchmark results that had been run in house. Of course I always take benchmark results provided by the manufacturer with a pinch of salt, but in this case I’ve seen faster results than those supplied by nVidia, despite using a very similar SLi test rig. For instance, nVidia claims a 3DMark05 result of 8645 at 1,600 x 1,200 with 4x FSAA and 8x AF, while I managed 9121. Likewise, nVidia posted 85.6fps in Far Cry at the same settings, but I managed 91.6fps. Of course the extra performance is probably due to the slightly higher clock speeds sported by the XFX cards, but it’s always good when independent tests outstrip the manufacturer’s own numbers.


The XFX GeForce 7800 GTX is a fully ViVo compliant card, so you’ll be able to output and import video/audio signals. This is particularly important when you want to watch some HD video content on your large screen TV. The card will output either an S-Video signal, or the far preferable Component Video. However, the best way of outputting HD content will be over DVI, to a suitably equipped large screen LCD TV, but at least you’ve got all the bases covered.

As usual, XFX has shipped the card in a large X shaped box, which does look pretty cool. In the box you’ll find the card itself, two DVI to D-SUB converters, two S-Video cables, a ViVo cable with S-Video in, S-Video out, and component video out. There’s also a twin Molex to six-pin PCI Express power converter, a driver disc, manual and a free T-Shirt.


Finally there’s a games bundle thrown in, and although X2: The Threat and Moto GP 2 are unlikely to get your pulse racing. Far Cry still looks as sweet as it did on the day it launched over a year ago. 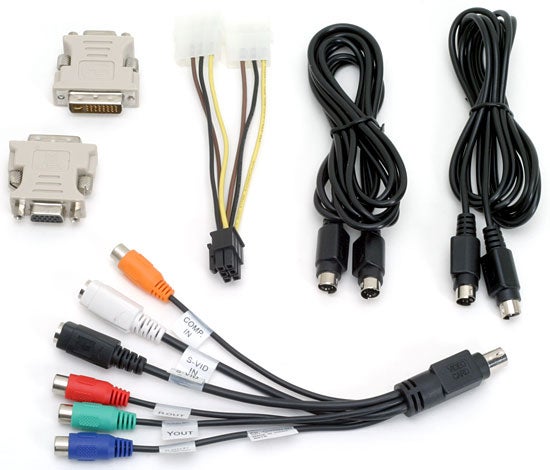 
But despite the high price, I can’t help but love these cards. What I have in front of me is the current pinnacle of graphics technology – these cards will, quite simply, laugh at even the most demanding of 3D games. I guess I better start saving my pennies.


This is the fastest graphics card ever to grace the TrustedReviews lab. The GeForce 7800 GTX is a totally awesome chipset, and the slightly overclocked XFX retail board pushed the envelope even further. If you’ve got a lot of money, buy one of these cards. If you’ve got even more money buy two – you won’t regret it. 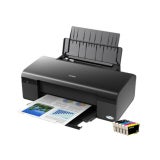