Laser-based multi-function devices start at under £200, so to ask over £1,600 for one, there have to be substantial differences. Xerox’s WorkCentre 4150V P has quite a few of these, not least of which is its weight – a massive 50kg; this is a definite two-man lift and you’ll want a substantial desk, or its own, optional, wheeled cabinet, to sit it on.


As the weight might suggest, this is a big device and geared for a busy office environment, where it will be in near-continuous use for most of its working life. You notice several things as soon as you unpack the WorkCentre and plug it in. First of these is the large, mono LCD, touch-screen display, which acts as both status display and the main control for the machine. This panel is used to set up copy jobs and monitor printing and scanning tasks.


At the top is a substantial Auto Document Feeder (ADF), which can take up to 50 sheets and scans fast enough to keep up with the print engine’s rated 43ppm. The touch-panel is bracketed on the left by menu selection and job-list buttons and on the right by a number pad and function keys to start and stop jobs. The WorkCentre 4150V P doesn’t include fax functionality, though this is available as an option and accounts for the number pad. 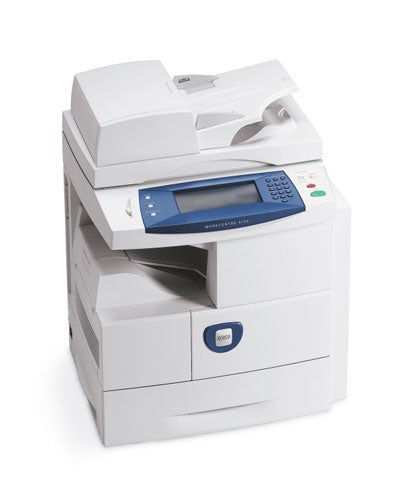 Below the control panel on the left-hand side is an aperture where printed sheets appear and although this is a common design for office multi-function machines, it doesn’t make print jobs particularly easy to remove. Below the paper-out tray is a maintenance panel which folds down to provide access to the toner and drum units, which last for up to 20,000, five per cent pages. On the right-hand end of the machine is a pull-down tray which can take up to 100 sheets of multi-purpose media, in addition to the main feed tray, which slides out from the front and takes a full, 500-sheet ream of paper.


You can stack up to three, extra, 500-sheet trays under the machine and add a finishing unit which will staple documents, making it the basis of a very expandable piece of office equipment.


The WorkCentre 4150V P is designed to be used as much in a standalone environment as it is as a network printer, but connection for workgroup printing is a simple matter, using either the USB or built-in Ethernet interfaces. If you connect via the network socket and run the Xerox driver, the software spots the IP location of both the printing and scanning parts of the machine and installs the appropriate drivers.

Copies of Nuance’s well-known OmniPage and PaperPort applications are provided, and handle network scanning as well as document management.


There are some nice touches in the way this machine works, which indicate the thought Xerox put into its operation and the workgroup nature of its intended market. Things like each print job being given a banner sheet with the name of the user, and the file printed help sorting the output, if there are several jobs on the output tray. The touch panel is also good at providing messages when jobs are held or processed out of order.


Print jobs certainly do fly out of the WorkCentre 4150V P, with our five-page text document completing in just 15 seconds, a full 20ppm. Even if you select duplex printing, things don’t slow much, with our 20-side text document printing at a real-world speed of 27spm. Taking into account the usual hike of claimed print speeds, this is still a very fast machine.


Partly due to its high speed, this isn’t a quiet machine; we measured it at peaks of over 60dBA. The only consolation is that, again due to the speed, it should be making that noise for less time. 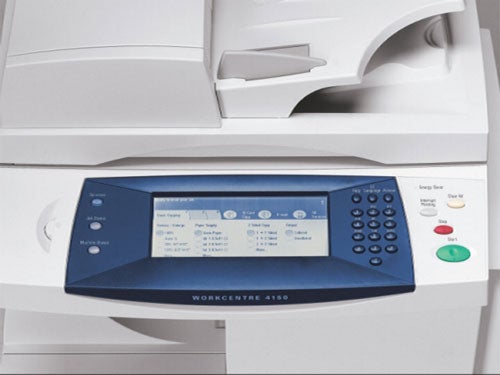 Print quality is very high on the text side, with no noticeable spatter and clean, well-formed characters, even at small sizes. Pages printed on both sides aren’t exactly aligned though, with the reverse side coming out around 2mm higher than the front side. For most purposes, though, nobody will notice this.


Business graphics shows some stippling, partly due to the workaday resolution of 600dpi, which is also the resolution of the scanner. Circles are not as smooth and greyscale tints are not as clean as from some mono lasers we’ve looked at. The photo test image was poorly printed, with no real shadow detail and course gradations of tint in the sky.


There’s no doubt this device will cope with the workload of many a medium to large workgroup. It has appealing ease-of-use features for a machine which is to be shared between people and is very quick. However, the print quality of anything other than text is not spectacular and the cost is high. Look at the machine’s main competitors before making a final decision.