Combining colour laser print with scanning, copying and fax in one machine is both space-saving and cost-effective, but every component has to be well matched. Xerox has a range of full colour multifunction devices and the Phaser 6128MFP sits nearer to the bottom than the top end of its range.


This is a big machine, measuring over half a metre tall, and is considerably bigger than it looks in Xerox’s brochure. It would be best on a stand of its own, rather than taking up somebody’s desk space. 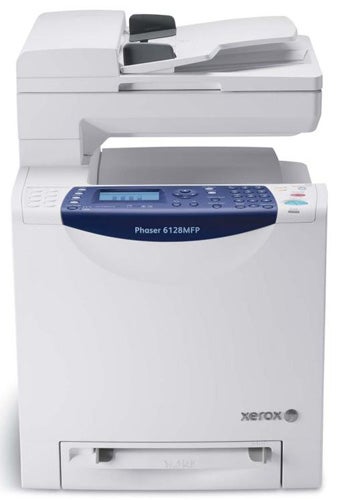 All decked out in Xerox’s trademark white and dark blue, the machine has a slightly old-fashioned scanner-on-top-of-a-printer appearance. It’s designed so that the scanner, complete with its 35-sheet Automatic Document Feeder (ADF), sits across the output tray of the printer. The right-hand side of the machine is open, to make removing printed documents easier.


There’s a single, 250-sheet paper tray at the bottom of the machine, with a single sheet feed slot just above. This provision is the weakest area of the design, as a busy office will get through 250 sheets quickly and there’s no option to add any extra trays.


The control panel is quite busy, with eight quick-dial fax buttons on the left-hand side, as well as a full numeric pad towards the right for individual number dialling. This number pad serves a secondary purpose for entering passwords, so you can send a secure print job and collect it at the printer by entering a personal password. 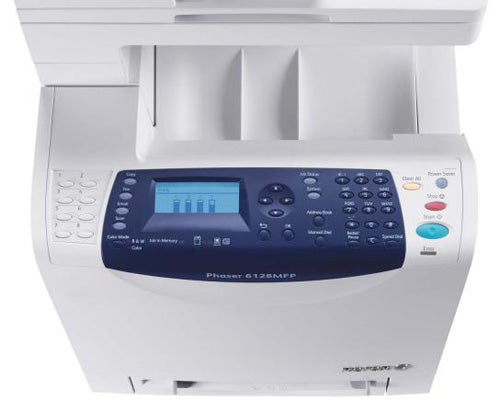 The fully-bitmapped, backlit LCD display is used in a variety of ways, for everything from toner status display to menu options, though more could be done to display graphical help as on some other multifunctions of this type.


There are sockets at the back for USB and Ethernet, as well as for a phone line and an optional, third-party handset.


To get the machine running, you first pull down the front panel to reveal the transfer belt and four colour print drums, each of which needs tapes removing. Behind the door on the right-hand side are four toner cartridges and each of these must also be locked in place before the machine can print.


Xerox supports Windows, Apple OS X and SUSE and Red Hat Linux and there’s a scan to desktop utility written by Nuance and a PCL 6 driver for Windows customers.

Xerox quotes speeds of 20ppm for black and 16ppm for colour for the Phaser 6128MFP, but from our tests these are optimistic figures. Our 5-page black text document completed in 32 seconds, a speed of just 9.4ppm and although the 20-page print increased this to 12.9ppm, it’s still some way short of the claimed speed.


Things are quite similar with colour print, with our five-page black text and colour graphics document giving a slow 6.8ppm. Subjectively, the printer never seems to acknowledge any real urgency when printing and the ADF on the scanner gets well ahead of the printer, with all but the last page of a five-page copy job being scanned to memory before the first started to print. 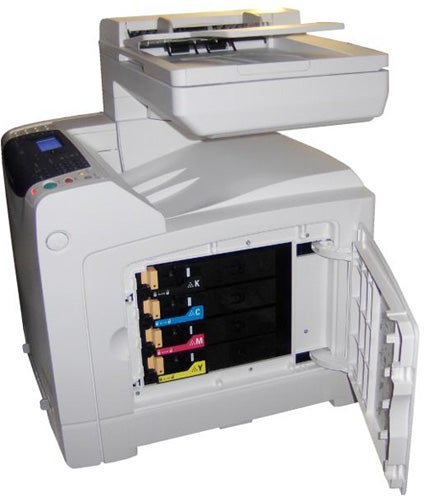 A 15 x 10cm colour photo took 26 seconds to print in enhanced mode, but at least the image it produced was better than many. Colours are more realistic, with less of the exaggeration produced by the small palettes exhibited by many colour lasers. There’s no sign of banding and detail from darker areas of the image is still visible.


Colours in business graphics are also well reproduced, bright but without shouting, and although there is some poor registration of black text over colour fills, results are generally better than average. This isn’t true of colour copies, which look insipid and blotchy in places. Black text at the machine’s maximum resolution of 600dpi is clean and well formed.


Noise levels, particularly when copying, are relatively high – we measured peaks of 63dBA – which is another reason it would be best not to position the printer on a desktop. 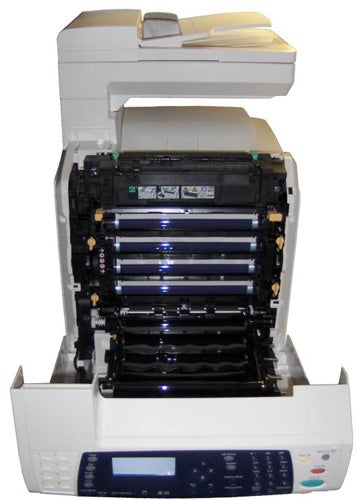 Despite there being separate toner cartridges and drums, Xerox only quotes toner as a consumable. Even so, running costs don’t come out that low. At the cheapest price we could find for toners, black print of an ISO page costs 2.9p and an equivalent colour page costs 11.9p. Compared with the Samsung CLX-6220FX, this is around 0.5p more expensive on black and over 1.5p dearer on colour, though the Samsung machine is over £150 more expensive to buy.

There’s plenty to like in the Xerox Phaser 6128MFP, from its secure print and the ability to keep printing black when the coloured toners have run out, to its easy-to-maintain design. However, there are some niggles, too. It’s quite slow for a machine at this price and it’s annoying there’s no way to increase its paper capacity. While not expensive to run, there are rival machines whose consumables are cheaper and which offer automatic duplex print thrown into the mix.