Laser multifunction machines aren’t cheap, but Xerox’s Phaser 6121MFP/N is one of the least expensive on the market. It’s designed for the small and home office and provides fax facilities, as well as the normal print, scan and copy.


The machine has very modest dimensions that are governed by the scanner, including its 35-sheet Automatic Document Feeder (ADF) coloured all in white. Except for its dark blue control panel, it looks modern and presentable. 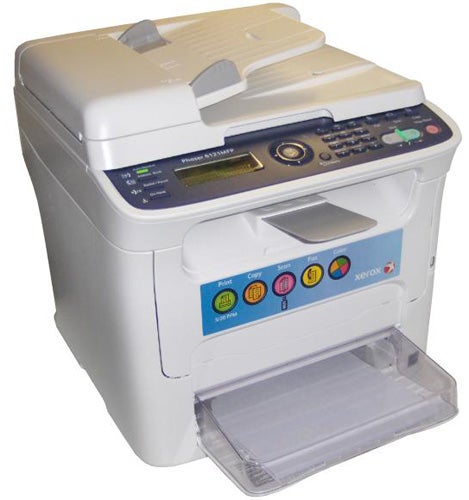 The controls include a number pad for fax dialling, though there are no one-touch presets and the four-line by 16-character LCD display could do with a backlight and needs good overhead lighting to see easily. A large control ring handles navigation and three large buttons, with a multi-colour indicator set between two, handle scan and copy job start and cancel.


There’s a USB socket further down the front panel, but this is restricted to storing scanned images and can’t be used for walk-up printing – a missed opportunity.


Immediately below the control panel is the slot from which printed pages emerge and at the base is a pull-down flap, which becomes the bottom of the machine’s 200-sheet feed tray. There’s no multipurpose feed to the printer, so any special media will have to be loaded in this one tray.


It has a clear plastic cover, so you can see paper status at a glance, but it’s unusual in a machine of this size to have the trade projecting like this, where it can get knocked. A second, 500-sheet tray is available as an option, as is a duplexer unit, which is provided as standard on the Phaser 6121MFP/DN.

Connections at the back comprise USB and Ethernet and there are sockets for phone line and a third-party phone handset.


The four toner cartridges come pre-installed behind a second pull-down flap on the front panel, which gives access to the carousel. They are easy to load and replace and you’ll need to do this every 2,600 pages or so.


Software installation is straightforward, and consists of printer and scanner drivers, as well as the Scan Dashboard, which offers simple document handling. Drivers are provided for Windows and OS X.

The main problem with this machine is that it uses a carousel-based laser engine. This means that the four toner units are held in a rotating carousel and moved into position to work with one imaging drum. A page image for each colour is overlaid on the drum before the four-colour image is transferred to the paper.


The problem comes in the time it takes to lay down four images, rather than one. The more modern inline design runs the paper past four drums in-line, so a full-colour page takes no longer than a black one.


Xerox claims a black print speed of 20ppm, but only claims 5ppm for a colour page. This ratio was confirmed by our tests, though the black print speeds we recorded were 11.1ppm for the 5-page document, rising to 16.9ppm for 20 pages, and 4.4ppm for colour. The same comparison runs true for copies, too. A 5-page black text copy took a very reasonable 42s, while a single colour page ran to 57s. 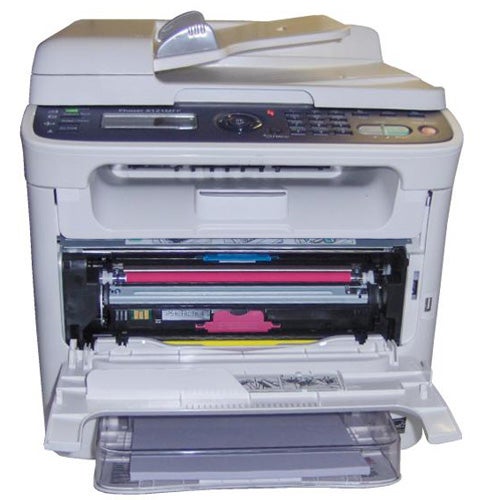 Despite the low print speeds, or perhaps because of them, the output quality from the machine is generally very good. Black text is sharp and clean, with no sign of toner spatter and colour graphics are intense with areas of solid fill dense and bright. Black text registration over colour is also good. Even our test photo print came out well, looking reasonably natural hand not suffering from quite the limited colour range of some budget laser engines.


Consumables for the Phaser 6121MFP/N don’t come cheap and you need to replace the imaging drum after 20,000 pages – or 10,000 pages if you’re printing exclusively colour – as well as the toner cartridges. The colour cartridges are available in 1,500-sheet yields as well as the 2,600 sheet yield, common to the black cartridge.


Xerox’s Phaser 6121MFP/N is a good laser multifunction printer, hampered by the fairly outmoded design of its laser engine. Even modestly priced printers and multifunctions are now using in-line, which print colour as quickly as black pages. Here, though, colour pages takes roughly four times as long as black ones.


The other problem is running costs. Unless you can find consumables considerably cheaper than we could, you’re paying over the odds for both black and colour print. Which is a shame, as the print quality itself is above average and very suitable for the SOHO market at which it’s aimed.