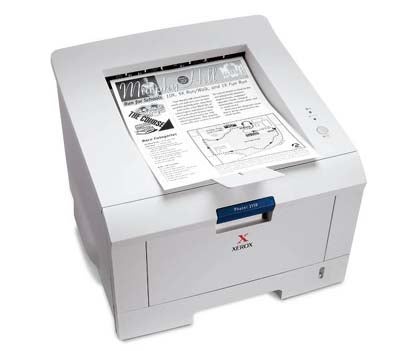 Xerox may have had the photocopier market largely to itself for many years, but it has never enjoyed the same success with its printers. It bought its way into the colour laser market by acquiring Tektronix in 1999, and now uses that company’s Phaser brand for both colour and mono lasers. The Phaser 3150 is a personal or small business mono laser, rated at 20 pages per minute.


The Phaser 3150 is a large, square-cut printer with no pretensions to be anything else. A 250-sheet A4 paper tray slides in underneath the main mechanism and a 100-sheet multi-purpose tray unfolds from its front. The paper falls into a deeply indented tray in the printer’s top surface and there’s no paper-up output tray at the rear, though there is a fold-down panel to help deal with any paper jams.


Also at the rear is a large, full-width bulge housing the printer’s power supply and giving it a considerably greater depth than at first appears. There are just two lights on the Phaser 3150’s top surface, indicating power, data, paper jams and low toner between them, and a single button to cancel the current print job.


At the back are sockets for both USB 2.0 and parallel connections and for an optional second paper tray, which fits under the machine. There’s no wireless or cabled network facility as standard or as an internal option, though you could, of course, run it from a separate printer server.


The all-in-one consumables cartridge slides into the printer when you fold down the whole of the front panel and could hardly be easier to fit or replace. Support software for the printer is also easy to install from the supplied CD and once set up, Windows recognises the printer and installs it automatically ready for use. 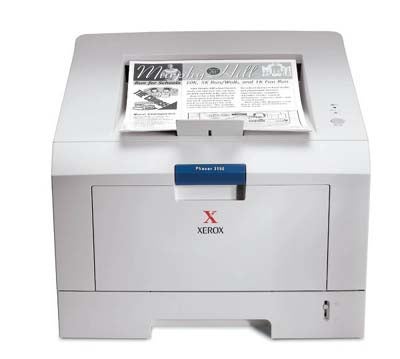 The main software application is the printer driver and it includes most of the facilities you would expect. So, you can select the source for the paper you’re printing on and the resolution at which to print. Although Xerox quotes a maximum resolution of 1,200dpi, this is labelled ‘1,200dpi print quality’ and we believe the maximum physical resolution is 600dpi. This is plenty for normal office applications though, so there’s no need to panic over this issue.


The driver supports watermarks, page imposition – where you can print up to 16 pages per sheet of paper – and poster prints which enable large printouts if you have any skills with a roll of sticky tape. There’s no duplexer on the printer, nor any facility for over-printing. 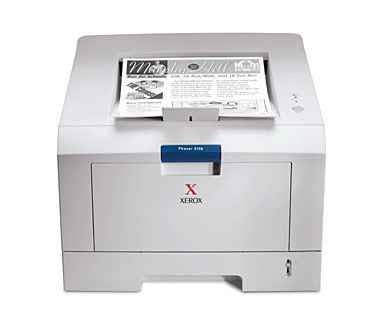 Print quality was surprisingly unimpressive. While text was precise, it was also quite light in comparison with other machines in this price range. Under magnification, though, the characters were well formed and there was very little spread, typical of laser print – perhaps we have just grown used to slightly darker and more definite text.


Print speed is pretty impressive and although the printer doesn’t achieve the 20 page per minute claimed throughput, we did see our five-page text document complete in just 24 seconds, giving it a real-world, default text (i.e. not draft) output speed of 12.5ppm. Xerox also claims a 10 second first-page-out time, but under test this was only realised if the machine was already awake and printing a simple text document.


The speedy response continued with our text and graphics print and the 3 x 5in photo sample, which completed in just 21 seconds. These are very commendable results for a printer costing under £200. 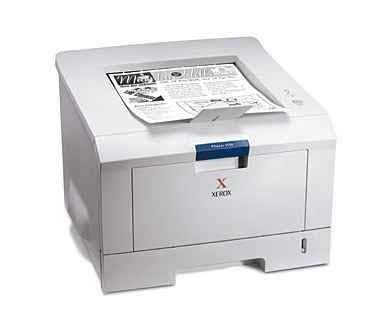 While sleeping, the printer is very quiet, but noise levels rise to over 50dBA when printing, which makes it noisy for its class. It might be difficult to take a phone call if the Phaser 3150 was printing while situated on the end of your desk


Xerox supplies two different all-in-one print cartridges which, like HP’s, contain both developer drum and a supply of toner. The 3,500 page cartridge costs £78, but it’s much more economical to pay an extra £11 for the 5,000 page version. Using the higher yield cartridge in our calculations, we obtained a cost per page of 1.24p, a good result and one which means you’re not paying for the comparatively low asking price with a consumables sting.


All in all, this is a reasonable printer with a fast throughput and most of the typical facilities you would need for day-to-day business printing tasks. While neither particularly quiet nor with exceptional graphics output quality, it is fast and cheap to run and at the price is a pretty good buy for regular duties.