Sometimes greatness isn’t about radical new ideas or genuine innovation, but about making more interesting choices about where exactly you steal your concepts from. Most genre games are content to borrow from the same fairly shallow gene pool, which is why you get a lot of FPS games that play a bit like Call of Duty 2 meets Halo meets Half-Life 2 meets Doom, and why you get a lot of RTS games that still play like Command and Conquer or Total Annihilation. World in Conflict, however, is smarter than your average RTS. Everyone talks about its theme and setting – an alternative 1989 in which the Russians go to war with NATO in Europe before launching a ‘Red Dawn’ attack on America itself – but arguably it’s the gaming influences that prove more exciting. Yes, you can still see strains of C&C, Company of Heroes and developer Massive’s own previous effort, Ground Control, spiralling around inside its DNA. However, look closely and you’ll also see elements of a lot of military shooters, from Call of Duty 2 to Battlefield 2 and Ghost Recon: Advanced Warfighter. 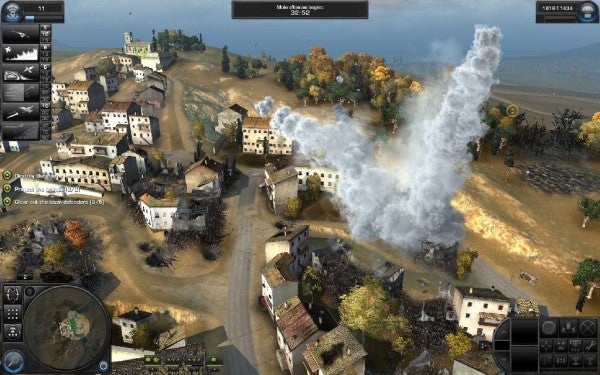 The result is still an RTS, but probably the most action-oriented RTS we’ve seen – with the possible exception of the back-to-basics Command and Conquer 3. This isn’t a game of resource gathering and long-term fortification, but a game of control points, reinforcements and working with what you’re given. You don’t need to worry about facilities, tech-trees and harvesting, but you do need to worry about getting troops quickly from one place to another and using them as efficiently as possible. Most importantly, this is a game about following orders and winning objectives. You don’t care about wiping out the enemy base or maintaining tactical dominance of the wider map. You have jobs to do, and you’d damn well better do them. 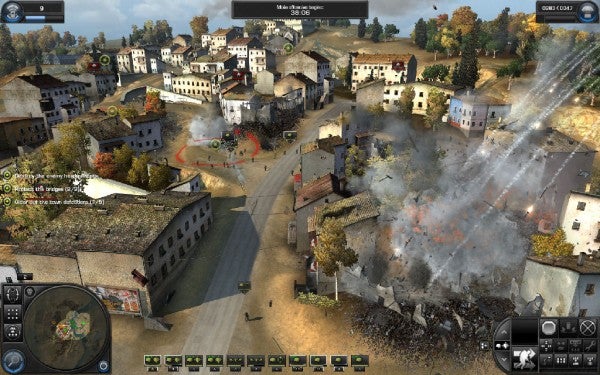 In effect, it plays a bit like a military FPS – and not just because you’re reliant on the W, A, S and D keys to move around the map. You arrive on the scene with the battle already raging and no particular idea of what you’ll be asked to do, and you’re given orders by your CO that play a crucial part in his wider aims. You may have to take an enemy position, hold a friendly position against hostile forces or target a specific enemy threat, but the one thing you can guarantee is that your objectives will change radically as the mission progresses. You’re not being asked to deal with the wider strategy – instead, you’re being asked to adapt quickly to new circumstances as they might crop up. Other allied commanders are out there doing their own jobs, and while you might be asked on occasion to support them, you’re not expected to take over. In fact, the game doesn’t give you any time to do more than focus on your own limited role.

Well, almost. As the commands flow through thick and fast, you may also be asked to take on secondary side-objectives, such as taking out enemy mortars on a hillside or rooting out snipers in a nearby building. These are optional, and every time you take one on you run the risk of spreading your forces thin. However, doing so is a short-term risk that pays off long-term, either removing enemy forces that would only make your job more difficult later, or giving you access to reinforcements or support options that you would otherwise have to do without. 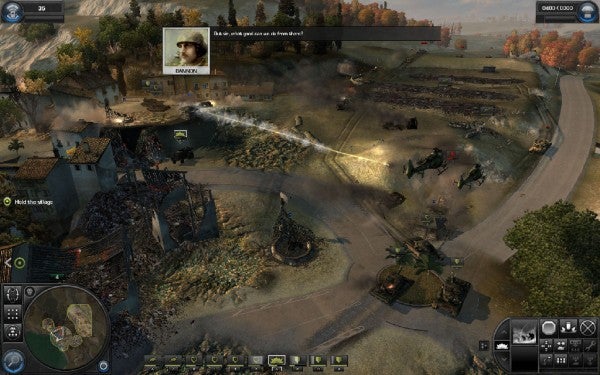 Reinforcements? Support options? Let me explain. Firstly, with no facilities to make troops, you have to have them airlifted in. At the touch of a button you can open up a reinforcements menu, call in specific troops or vehicles, and within twenty seconds or so they’ll be parachuted in to your currently assigned supply point. Of course, nothing comes for free, and to buy reinforcements you’ll need credits earned by achieving objectives and capturing specific control points on the map. While points will creep in to replace units as they are wiped out, this isn’t a game where you can afford to be wasteful. In fact, at times the game will deliberately limit or halt supplies of particular vehicle or troop types, or stop further reinforcements altogether. See what I mean about spreading your forces thin? The key thing to realise is that each unit has its purpose, strengths and weaknesses, with an elegant system of balances that even infantry troops have their place at any time in the game, particularly when armed with heavy anti-tank weaponry. Helicopters, meanwhile, have a distinct advantage against armoured units, but are vulnerable to AA batteries and certain support vehicles, meaning they can’t be deployed without backup from infantry, armour or artillery. For once we have an RTS in which standard tank rush tactics don’t always prove viable. 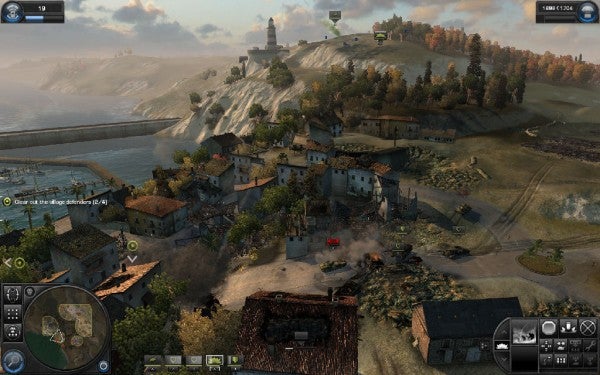 What’s more, as in Company of Heroes most units have one or more special abilities which can be selected and targeted periodically. You can do the old Command and Conquer lasso-and-click routine, but you’ll achieve your objectives much more efficiently if you group units carefully and make use of their specific capabilities. In some missions, it’s the only way to win.

Support, meanwhile, is arguably the game’s biggest attraction over rival RTS games. As with reinforcements, you can earn points that can be spent on calling in artillery or air support, enabling you to do precision airstrikes on fortified enemy positions, batter large numbers of enemy tanks as they approach, or even set off a localised nuclear attack. Like artillery bombardments? Like Napalm? Like awesome destructive spectacle on a frankly ludicrous scale? Well, it’s pretty safe to say that you’ll like this. 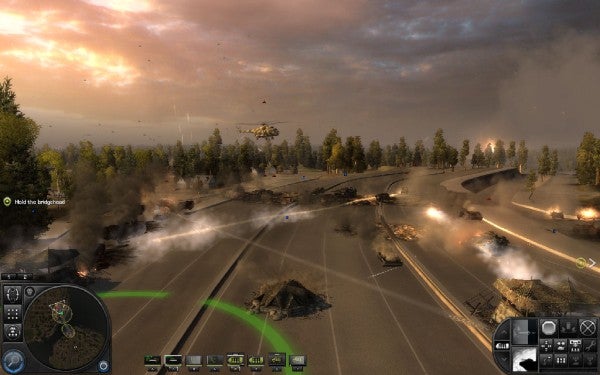 What all this means is that World in Conflict is a game of high-speed attacks and lightning-fast responses, with you switching rapidly between the support and reinforcement menus while trying to keep all your different forces moving towards their carefully appointed targets at the same time. Playing it is an exercise in what my old driving instructor would have called “the definition of coordination.” What makes it challenging isn’t the complexity of your tasks – it’s hard to think of a recent RTS with a more stripped-back style and interface – but the breakneck pace at which you’re expected to achieve them. While your own troops are smart, the enemy AI is even smarter. They probe defences, outflank, sneak around and generally make your life a misery. They even have the sense not to stick around when you call in an artillery barrage then an air-strike. If you can’t stay on the ball you might scrape through your missions, but you’re going to find it hard going in places. 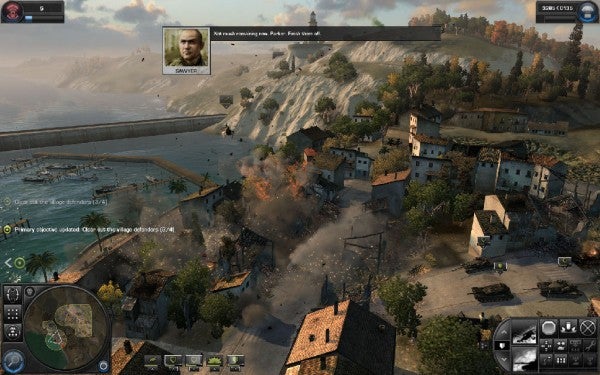 And this is where World in Conflict gets really interesting: it hasn’t just borrowed game dynamics from Call of Duty 2 and Battlefield 2 – it has also borrowed their atmosphere. Combine explosive confrontations going on everywhere you look on the battlefield with the boom and thunder of heavy weapons and the constant radio chatter between your CO and your fellow commanders, and you have the same feeling of chaos and carnage that the best military FPS games can achieve. The question is, when put under pressure, can you keep your head and remember your role? If so, the pace and the direct emphasis on small-scale troop command makes this one of the most thrilling RTS games in existence.

Of course, the graphics certainly help. With its DirectX 10 patch, it seemed that nothing could dethrone Company of Heroes as the visual benchmark for the RTS genre, but World in Conflict just about outdoes it, partly because the heavyweight artillery and airstrike attacks make for such spectacular fireworks. Close-in troop and environmental detail is a little lower than CoH, but it’s still roughly in the same ballpark, and the lighting, particle and smoke effects are probably the best I’ve seen outside of a cutting-edge FPS. Running on a Core 2 Quad with an Asus GeForce 8800 Ultra card, the experience is breathtaking, but owners of lower-end PCs shouldn’t be disappointed either. In the game’s DirectX 9 mode you’ll have to put up with slightly less impressive lighting and smoke effects – not to mention some less luxuriant grass and foliage – but the explosions still have a positively gobsmacking impact, and you’ll still be bowled over by the graphics. 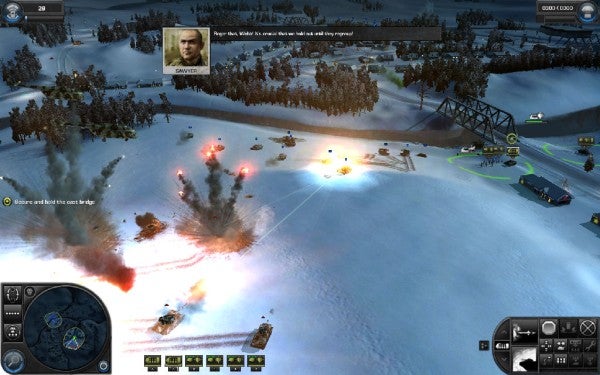 Interestingly, even the multiplayer mode shows evidence of potent cross-genre pollination. While you can play with a limited number of friends, the game encourages you to play a part in larger drop-in, drop-out games where you struggle for control points and take on a role: either Infantry, Armour, Air or Support. The feel is very reminiscent of Battlefield 2 – down to the inclusion of ranked matches and player profiles – and as in that game the key to success is understanding your role and playing your part, not grandstanding or making lone-wolf runs for glory. I haven’t had the time to get too involved myself, but I suspect that both online and on the LAN-party scene, World in Conflict will be very big indeed. 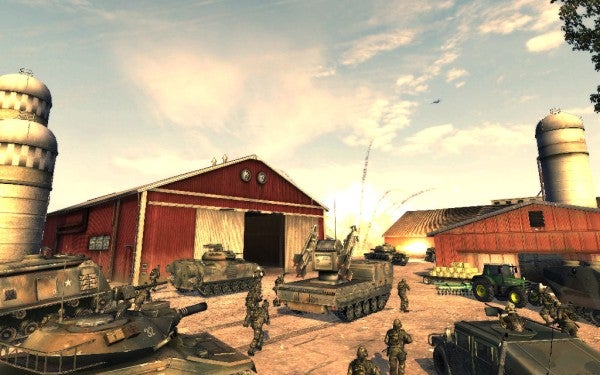 Are there any complaints? Well, I’m not sure the setting is explored as thoroughly as it could be. Massive has tried hard by adding inter-mission cut scenes that are obviously meant to give the story a human context, and there’s the occasional nice use of eighties music or a juicy snipped of classic cold-war paranoia in the dialogue, but for much of the game you feel you could be playing any modern military RTS (though at least such things are relatively thin on the ground). I think there’s also an argument that, at times, the player’s actions are rather too restricted – as in the military FPS games that World in Conflict takes its inspiration from, you can feel like you’re being dragged from one objective to another without any real time to make choices of your own. Arguably, Company of Heroes took a similar objective-based approach but gave you a little more scope to do your own thing. Still, given the drama and pace of World in Conflict, I think it gets the balance about right. It might not be as revolutionary or as brilliant an RTS as Company of Heroes – it’s excellent, but not a genre-redefining masterpiece – but it’s still easily the best I’ve played this year.


Action packed, adrenalised and undeniably spectacular, World in Conflict is the first RTS to give Company of Heroes a run for its money, and the current front-runner for RTS game of the year.