We’ll say one thing for Wonderbook right now: Sony hasn’t gone into this half-hearted. An ambitious augmented reality book for the Sony PS3, it makes great use of the PlayStation Eye camera and the PlayStation Move controller, and it makes its debut with a title grounded in what’s still fiction’s hottest property, Harry Potter. On paper, it’s a great combination. The Move controller makes a great magic wand, and from the pages of the Wonderbook arises a lovingly rendered world of witchcraft and wizardry, all bound up in the most enchanted book of spells. As a game it might fall flat, but as an experience it’s genuinely magical. 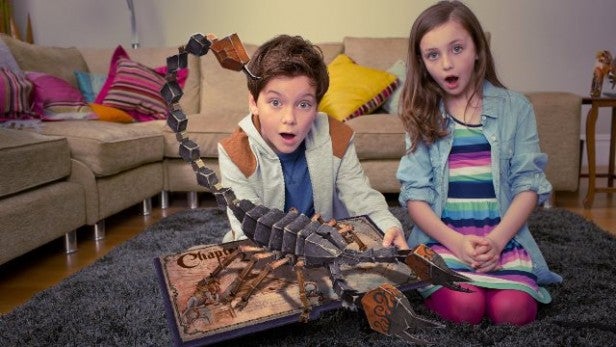 As an augmented reality platform, Wonderbook combines five things: the PS3, the TV, the PS Eye camera, the Move controller and a specially printed book whose cover and pages are filled with oversized, QR-code like emblems. You place the book on the floor, sit on the floor behind it, position the PS Eye so that both you and the book are in view, then use the Move controller to interact with it. If you already have PlayStation Move then you can buy Wonderbook: Book of Spells on its own for under £25. If you haven’t, it comes in a pack for just under £60.

Turning the pages of the Wonderbook turns the pages of a virtual book on screen, and it’s there that those pages come alive. Text floats off the page to be read. Creatures crawl to life out of the paper. Scenes pop out as fully 3D shapes, or encompass the whole screen. These elements don’t just populate the area of the book, but creep, bounce or fly into your living room, and even the Move controller becomes a classic Harry Potter Magic Wand. Look carefully, and it’s not hard to spot the odd glitch or an incorrect shadow that breaks the illusion, but as illusions go it’s remarkably convincing. We were cynical, but for the first half hour or so – and frequently after that – the Wonderbook really is a thing of wonder. 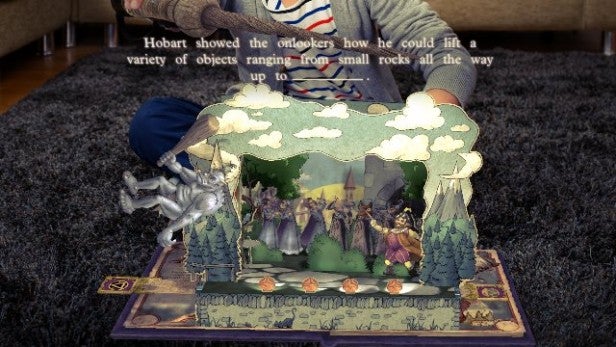 It’s also made for Harry Potter fans – particularly young ones. The whole premise is that this is an old book written by a legendary witch to give novice witches and wizards a grounding in the most important spells. Each chapter takes you through a selection, complete with descriptions, instructions for casting, some simple, fun exercises, a few stories and – finally – a grand test that puts all the spells learnt to good use. 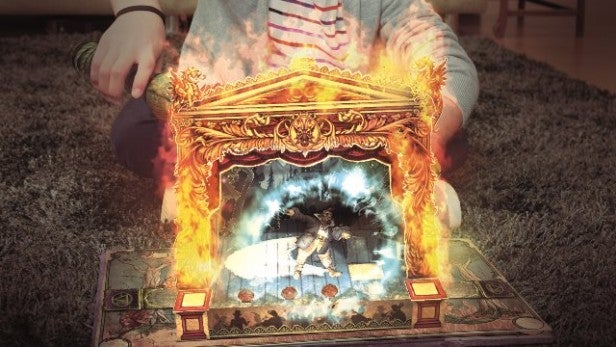 The presentation is consistently brilliant. Letters and words fly off the page to form sentences at the top of the screen, or magically transform into objects or critters. Stories are told as shows in a pop-up pupper theatre, complete with tabs you can pull on to make something move or decide whether a wizard will sing the national anthem or play the bagpipes (though you may be informed that your selection wasn’t right). Holes appear in the page, and you tilt the book to look down them. Birds appear, summoned by your wand, and proceed to munch on bugs crawling around the pages. The music, while not tied into any Potter themes, still hits all the right notes, and the voiceover, performed by a David Tennant sound-alike, is perfectly pitched.

Casting spells is simple enough for even the densest middle-aged muggle, but authentic enough to please all but the most ardent Potterphile. You’re initially taught the incantation. Don’t get too excited; you’ll only say it the once and you can actually shout anything at the screen. After that you’re taught a gesture, where you point the Move controller at the screen and make the drawing, sweeping or flicking strokes required. Once cast, you generally use spells in two ways, either with a flicking motion of the wand to, say, discharge sparks of fire or reveal hidden writing in the book, or by pointing the wand at the screen and squeezing the trigger button – ideal for shrinking a gnome down to size or levitating objects from the ground. 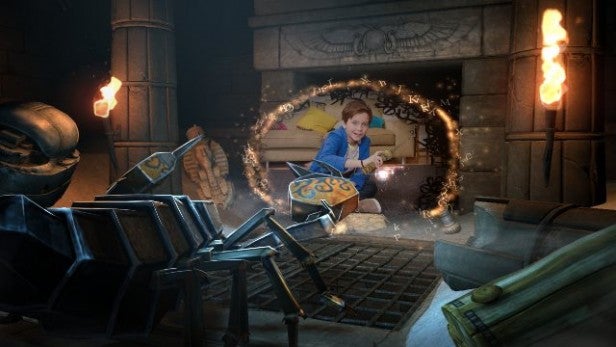 This is just the kind of activity you’ll find yourself getting up to into the exercises and end-of-chapter tests, along with subduing mythical beasties, fire-bolting paper dragons, helping protect a dragon’s egg and solving the riddles set by a rather uncommunicative sphinx. It’s here that Wonderbook: Book of Spells starts to go a bit awry. The various activities are interesting and the Move makes a solid and precise magic wand, but the actual content isn’t half as imaginative as the presentation. It all comes down to repeating the same spell a few times, pretty much as instructed, then moving on to the next thing. 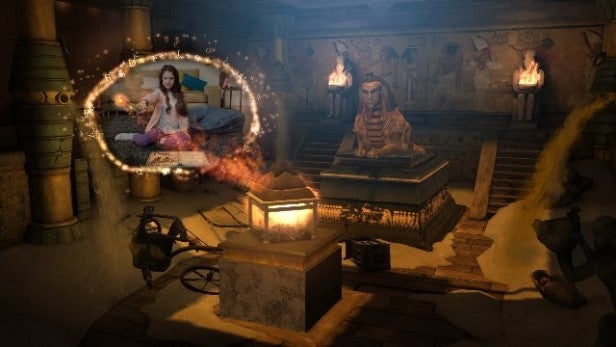 At the end of each exercise there’s a nice certificate awarded – complete with magic moving photo – plus house points depending on the speed and skill of your execution. Sadly, these don’t turn out to be of much real consequence. The tests, meanwhile, do little more than ask you to solve very simple puzzles using the spells at your disposal, and in the unlikely event that even younger wizards and witches can’t work out which to use where, you’re practically prompted anyway. You keep waiting for Book of Spells to give you something you can get your teeth into, or a sandbox where you can really put your magic skills to work. Instead, it’s all made to feel a bit pre-scripted and mundane.

Up to a point this doesn’t matter. This is more an interactive experience than a game, and the combination of the AR technology with the Harry Potter world and the high production values makes this it a good one, even if you’re only watching. If you want something that will keep the kids entertained on a wet Sunday afternoon, this will more than do the job. 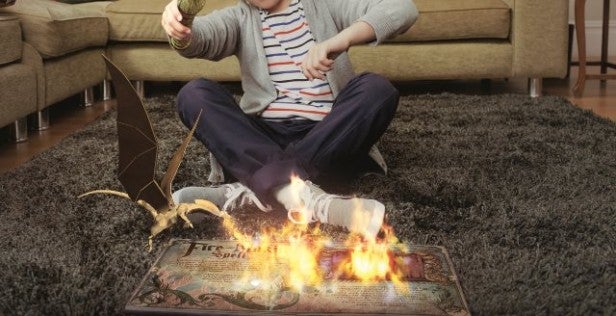 However, with five chapters, each taking roughly sixty to ninety minutes to complete, it’s not going to keep your Potter-maniacs busy for much longer than The Deathly Hallows parts 1 and 2. They might want to revisit the mini games to relive the experience – though there’s not really that much replay value – and there are some slightly dull collectibles to collect, but this particular Wonderbook struggles on long-term appeal. What’s more, the repetition of the elements means it’s best ‘read’ through over several sittings. The magic palls if you do more than a chapter at any one time.

We also have a few questions about who this is really aimed at. Older readers will find some of the tales and the experiences a little childish, but younger kids might not be so familiar with the universe, and might find the spell-casting over-complex. You’re probably alright in the seven to eleven age range, but parents of older and younger children might want to think twice.

An impressive first outing for Wonderbook and a genuinely magical experience for younger Potterphiles. However, it’s one best enjoyed in small doses, and you’re left wishing that there was more room to wield magic, think, solve puzzles and just play. Book of Spells might convince you you’re a wizard, but it hardly ever lets you explore the part. Wonderbook will keep the kids enchanted on Christmas Day, but their enthusiasm may pall before Boxing Day is over.