What is the Witt WIF78SQW2?

Hot from innovative Danish brand Witt, the WIF78SQW2 takes understated style to a whole new level with pure black glass and neatly bevelled edges. It backs up its cooking credentials with six super-powerful burners and a trio of automatic heat levels that keep your pan contents warm, melting or simmering.

Heat-up times with larger pots and pans are the fastest we’ve tested and the automatic temperature settings are a great feature. The WIF78SQW2 isn’t at its fastest with small pans and touch sensitivity could be better, but for chefs looking for big style and big cooking potential, this Witt is a real winner. 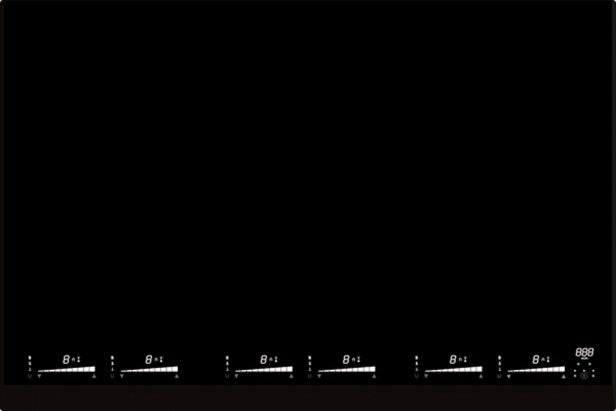 Witt’s stunning WIF78SQW2 induction hob isn’t yet available in the UK, but the company sent us a review unit directly from its HQ in Denmark. And, wow, what a stunner it is. Proving conclusively that less is more, the Witt’s all-black glass has the faintest of zone markings, leaving it oozing ultra-clean and uncluttered style.

The glass itself has a super-fine texture that gives it a slightly satin, rather than full-gloss, finish. It showed grease and finger marks with equal aplomb to polished glass, though, so no benefit on that front. The neat bevelling on three sides of the glass is polished smooth, offering a contrast to the main surface when it catches the light. There are no logos or branding of any sort visible. 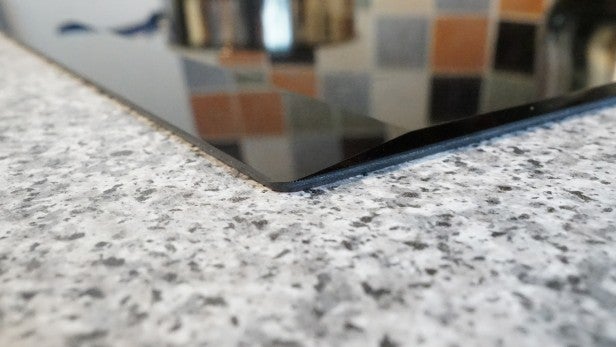 Power up the WIF78SQW2 and the slider controls and status indicators light up white in a smart row along the front edge. Having seen more than our fair share of bright blue, garish red and even orange LEDs on induction hobs, the white on minimalist black glass looks fabulous. Arguably, it will complement a wider range of worktops and cupboard door colours too.

Having comfortably scooped the accolade for the best-looking hob we’ve tested to date, there’s plenty to cover when it comes to the feature list too. This six-zone, 78cm-wide hob offers very high power induction burners for speedy heat-up, including two levels of power boost. There are nine levels of control for more precision cooking and three automatic settings for each zone: keep warm, melt and simmer.

Keep warm will hold the pan contents at around 42oC, the melt function is ideal for chocolate at around 70oC, and the simmer function should keep the pan just below boiling at 94oC. The same detection system that measures pan temperature automatically registers the zone on which you place your cookware and lights up the corresponding slider control. Similarly, if you place a large skillet or griddle across any two zones front to back, the hob automatically bridges the zone together and offers a single temperature slider control across the entire surface. 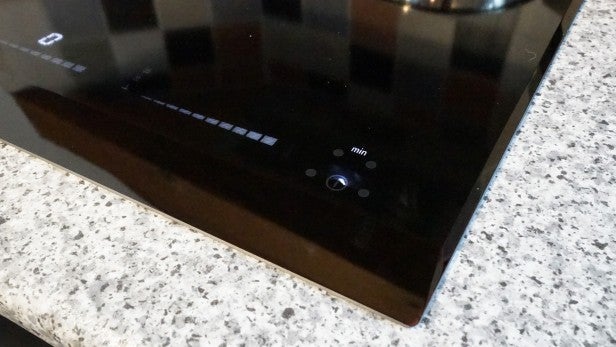 Each zone has an individual timer with a little egg-timer display beside the power level indicator, and an arch symbol that’s similar to an upside down ‘U’ symbol – which we finally realised (user manual was in Danish, in our defence) was indication that the zone was bridged. Residual heat on the hob is indicated by a more tradition ‘H’ for each zone. Finally, a small cluster of touch controls to the right offer timers, a pause/resume function, overall power on/off and a child lock.

Of course, this luxurious style and burgeoning feature list comes at a price. The Witt WIF78SQW2 will cost around £1850, which is certainly a premium price point for any kitchen appliance.

The clean-glass look and the lack of obvious zone areas do mean that this hob takes a little getting used to. The automatic pan detection works well, but it needs to be placed relatively accurately in one of the six zones to keep it heating evenly across the base of the pan. It didn’t take us long before it all became quite intuitive, however.

The controls are all supremely logical, with the power slider going from 0 to 9 and the two-stage boost function accessed by a single press or press and hold at the far right end of the slider.

While the controls were responsive most of the time, there were a couple of occasions when we had to repeat the press or try sliding our finger again. You couldn’t accuse the controls of being reticent or sluggish, but there was more than one occasion when we had to make the control move twice, particularly with wet hands. 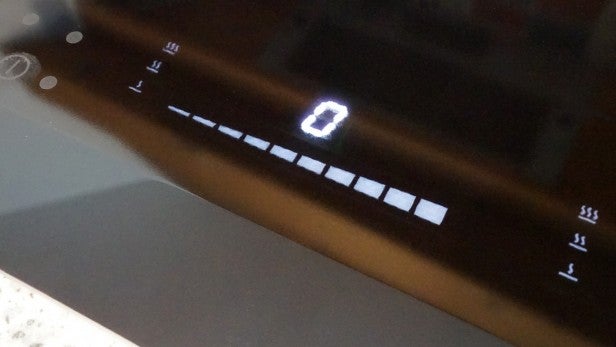 As we can see from the thermal imaging, the zones are large, squared-off circular burners that certainly promise to deliver some serious power. With such large burners across the board, the actual power delivered will be relative to the size of the pan placed on them. The hob can cope easily with pans up to 21-23cm diameter. Heating across the base of any round pan is supremely even, with no hot spots and only a slightly cooler spot right in the middle.

The flip side of all this is that smaller pans are slightly less well catered for. For example, our the Witt could only deliver just over 1500W of power into our compact 17cm pan, regardless of whether the setting was on nine, boost or super-boost. That said, this is still a lot of power for a small pan, so it did pretty well in our boil test anyway. With a larger pan the super-boost will deliver around 3800W, which is outstanding. 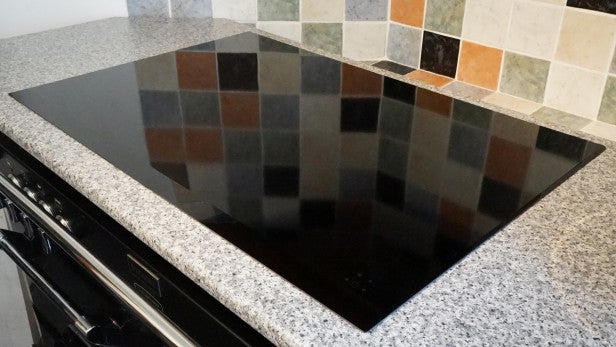 The automatic pan zone detection that lights up the slider and three automatic temperature controls is a really neat feature. The hob has to do a little guess work with regards to the temperature of the contents of the pan, since there are no direct sensors in the food. That made the results somewhat more variable than the precise temperatures claimed in the manual, but still very effective.

The coolest keep warm function was ideal for keeping pans ticking over while you cook other items, and the melt setting allowed you to heat chocolate directly in a pan. Since this test involves chocolate on work expenses, we tried it six times just be really sure. The simmer setting is equally useful, allowing you to put on frozen peas to boil without them boiling over.

If the contents of the pan do boil over, the Witt is fairly easy to clean. We thought the slight texture to the glass might give baked-on spills a firm hold, but it didn’t seem to be any more onerous than gloss-finish tops. We did give the surface a scrape with a plastic scraper to no obvious detriment, but that finish might be a little bit more sensitive to heavy-duty cleaning than a standard gloss one. 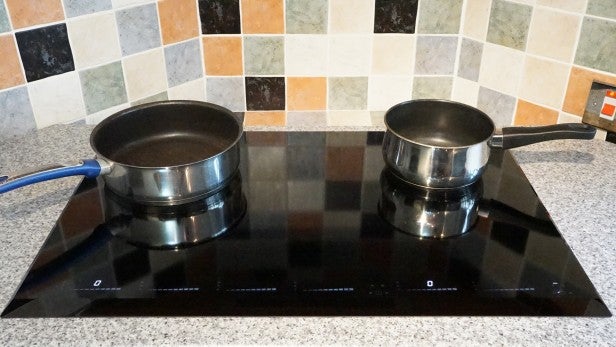 You can place a finger anywhere on a slider for starting up at a specific power, or give the slider a tactile finger swipe to the right. The first booster is at the very right-hand side of the slider. The second level is accessed by a second press, with two small lines indicating the level of boost on each zone is display.

The squared off burners sit together nicely and are all large, 220mm x 180mm. This favoured our larger 19cm and 21cm pans, and gave very impressive and even base heating of our 23cm frying pan. Given that each zone can deliver over 3800W, the hob does do some power management of zones to ensure you don’t trip out your electrics if you have a lot of pans on the go at once.

Using that second level of boost, this is one seriously powerful, super-fast heating hob for larger pots and pans. Setting new speed records for heating 1.5 litres and 2 litres of cold water to 90oC in our 19cm and 21cm pans respectively, the WIF78SQW2 is ideal for chefs in a hurry. The 2 litres of water reached temperature in just 3mins 45secs, while the 1.5 litres very nearly broke the three-minute barrier at 3mins 3secs!

That’s blisteringly quick, over a minute a test quicker than average induction hobs and two to three minutes quicker than some of the slowest hobs we’ve tested. Multiply that over several pans, and cooking most days, and the time savings per year are huge. For those used to standard ceramic, solid plate or even gas hobs, this new-found speed will take some getting used to.

However, the WIF78SQW2 wasn’t at its best with our smaller 17cm pan; the burners are all rather large to be efficient with this size pan. Taking our 1 litre of water to 90oC, the hob delivered 1550W and took 4mins 57secs to get up to temperature. That’s a bit below average, and engaging either levels of boost have little effect on the power or the heat-up timings for a pan of this size.

Thankfully, this Witt isn’t just about raw power  The nine levels give you plenty of instant control and the three automatic temperatures are a superb upgrade on hobs that offer only a keep warm function.

The keep warm, melt and similar settings all worked well. Actual temperatures were a few degrees above or below the precise figures quoted, but that will have much to do with the temperature of your kitchen and ventilation too. Once the pan is up to temperature the hob pulses power at 100W, 300W and 900W depending on the setting, keeping the temperature pretty stable on each of these automatic settings.

Having used the hob in anger for a few days, we found the simmer function to be a real winner and would use it regularly. The melting chocolate feature less so… but that’s more to do with personal waistline management.

Should I buy the WIF78SQW2?

At close to £2,000, the Witt WIF78SQW2 is a premium induction hob that more than justifies its price with super-fast heat-up for larger pans and skillets, even pan-base heating, and three outstandingly useful automatic heat settings: keep warm, melt and simmer. Small pan heat-up speed is slightly below par, and touch controls can be a little insensitive – but for a super-powerful, well-featured induction hob with drop-dead gorgeous looks, this Witt delivers.

Powerful, stylish and with outstanding automatic heat features, the Witt WIF78SQW2 is a premium induction hob that easily lives up to its price tag.