The face of the PC industry is quite different to what it was a few years ago. Once upon a time the UK was littered with system integrators happy to cobble together anything and sell it to you. However, the vast majority have gone to the wall and for most people buying a new PC means buying a Dell. However, Dell hasn’t been too successful at attracting the most demanding of buyers, the gamers. No surprise then that it has just bought Alienware to take care of that market. 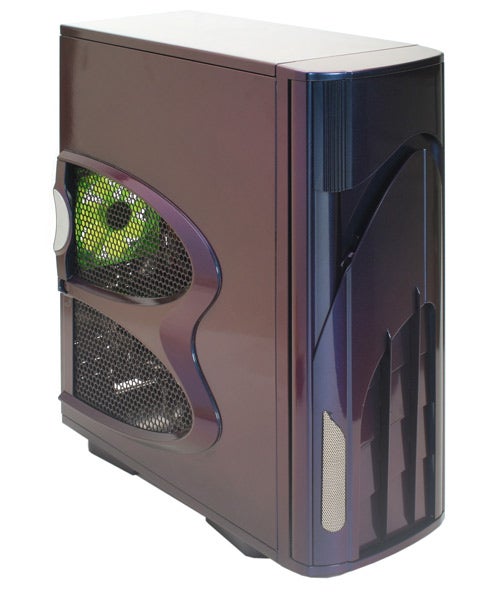 It’s good to see then that there are still smaller manufacturers around that are willing to create specialist systems that cater for those buyers who don’t want just another PC. Wired2Fire is a small company, that specialises in producing machines for gamers using the fastest quality components, in custom made housings. It sent us this system confident that it would be the fastest thing we’ve ever tested so we were keen to see if it would blow us away.


Taking it out the box then I found that Wired2Fire has selected a Thermaltake Shark case and given it a custom paint job. There’s nothing particularly wrong with this case, and it looks pretty snazzy with the paint job, but I couldn’t help but be a little disappointed that it was an off the shelf case, rather than something truly different such as this system we reviewed from Scan. That said the case has some nice touches such as the curves on the door and the small grille at the bottom left. The side panel is also quite distinctive with two arched grilles in the side and a funky handle mechanism. The grilles enable you to see what’s inside and give more area for warm air to exit the system. 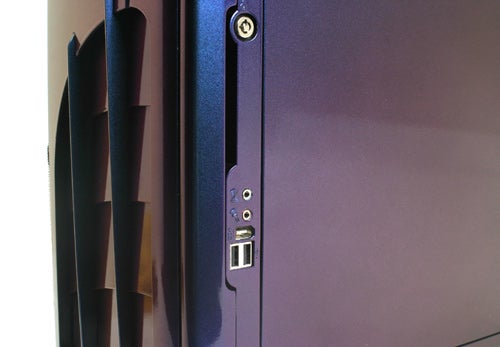 What does make the case quite different is its duo-tone paint job. It’s actually difficult to say exactly what colour this is as the colour changes depending what angle you look at it. It’s a genuinely strange effect. From a distance it looks purple; move closer and it looks blue, at other times it looks an in-between turquoise. It’s actually very cool indeed. Wired2Fire will charge you an extra £180 to have it done but it’s included in the price of this system. However, general opinion in the office concluded that a case with more curves would have enhanced the effect even more.

Unfortunately, the effect of the point job has been spoiled by some poor finishing. When the case door was sprayed the interior clearly wasn’t taped up and when you open it up, half the base under the door is painted and half isn’t, which just looks sloppy and isn’t what you want when you’ve spent over two and a half thousand pounds on a PC. 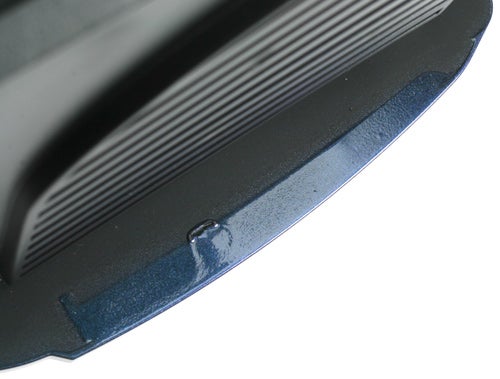 The case has quite a heavy door and magnetically closes with a satisfying thunk. The door also has a lock on it, but this won’t prevent would be thieves from removing the sides, which are held in place with thumb screws. The door also means that you have to open it to get to the drives and it’s easy to forget to open it after you’ve burnt a DVD making the tray hit the door as it ejects.


Behind the door you’ll find two optical disc drives, one of which is an NEC-4550A DVD Writer that will pretty much deal with any disc you throw at it, including burning dual layer DVD+R discs at up to 8x and DVD-RAM discs at 5x. Above this is a Sony DVD-ROM drive so you can do disc-to-disc copying and there are three free external 5.25in bays above. Below the optical drives are both a floppy disc drive, useful only for BIOS updates, and an X-Pro card reader with a USB port. To the side of the case are two further USB ports as well as a FireWire connection and a microphone and headphone line-in.


Internally, the choice of components proved to be something of a surprise. The processor, a dual-core Athlon 64 FX-60 is a good choice, especially combined with the pair of monstrous GeForce 7900 GTX cards. There are also two 250GB hard disk drives and no less than four sticks of memory. To make any criticism of this level of hardware could be considered churlish, but I’m going to do it any way. 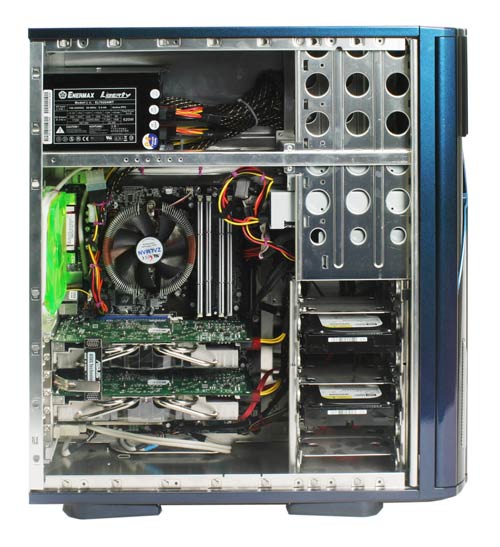 First, supplying four sticks of memory in an Athlon system is a mistake. The integrated memory controller on the Athlon 64 cannot address four DIMMs without dropping the Command Rate in the BIOS to 2T, instead of the faster 1T setting. What Wired2Fire should have done was supply 2GB on two DIMMs. Supplying four DIMMs is clearly a cost cutting measure and it also means that you can’t upgrade. Supplying four DIMMs would only really be acceptable if it was 4GB of memory.

The memory used is good quality branded Corsair Platinum XMS3200 RAM. This is designed to run at 400MHz, but for some reason it was set to 333MHz in the BIOS. This would makes sense if an FSB overclock was being attempted and the memory was deliberately set lower and run with a memory divider – but it isn’t.


Wired2Fire has also set up the two hard disks in a RAID 0 configuration, creating a large single partition of 500GB (unformatted). However, RAID 0 in a desktop brings no discernable performance benefit but does mean that your data is more at risk because there are now two points of failure. Instead, I would have preferred to see a very fast WD Raptor drive being used or the two drives set up at a RAID 1 mirror for data security. 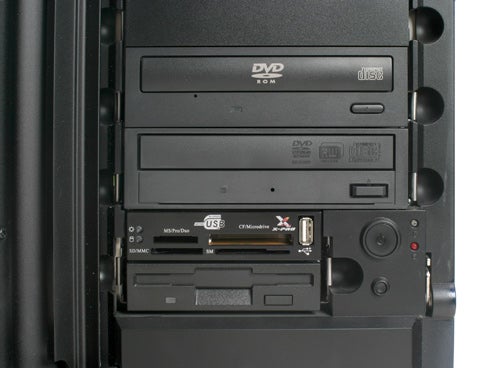 I was also confused by the choice of motherboard. The Asus A8N-SLI Deluxe is a good board, but with such powerful graphics cards I would have expected to see a motherboard with x16 PCI Express slots, rather than x8. The board also has a fan on the northbridge, and system noise could have been reduced by going with Asus’s x16 board, which has a heatpipe for cooling.


Powering all this is a sensible 620W Enermax Liberty power supply, which is enough to keep things ticking over. This is also a modular PSU and only the necessary connectors have been plugged in, which helps keep things neat.


Another oddity for a gaming machine is that there’s no dedicated sound card supplied. An X-Fi would have seemed an obvious choice. Wired2Fire confirmed that this was omitted because of issues with the nVidia cards that have now been resolved and one can be supplied for an extra £150. 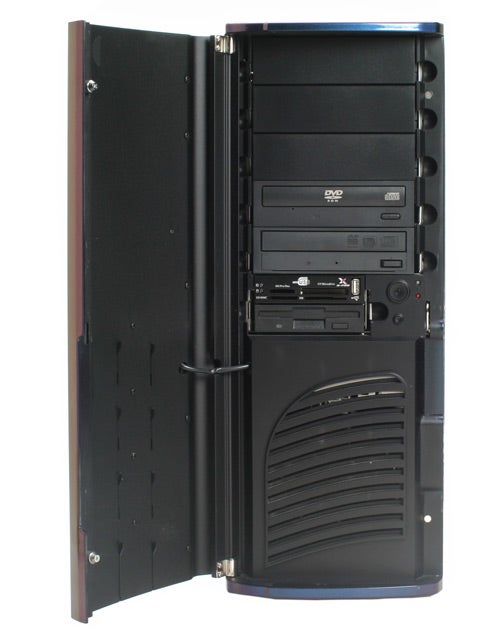 On the upside the machine is nicely put together. The two graphics card are held in place well and the cables are routed very tidily. Wired2Fire has also made efforts to keep the system far quieter than any other SLI system we’re looked at previously. The blowers on the 7900 GTX cards are pretty silent themselves and this is helped by the use of a large Zalman cooler on the CPU. There’s also large 120mm fans used at the front and back. There’s still an audible presense but it’s liveable with.

So I’ve made criticism of the component choices in the Pyro – but does it reflect itself in the performance results? To compare we ran the result against our reference nVidia graphics test platform which consists of an Athlon FX-60 with two GeForce 7900 GTX cards running at reference card speeds and two sticks of 1GB Corsair CMX1024 3500LLPRO memory. 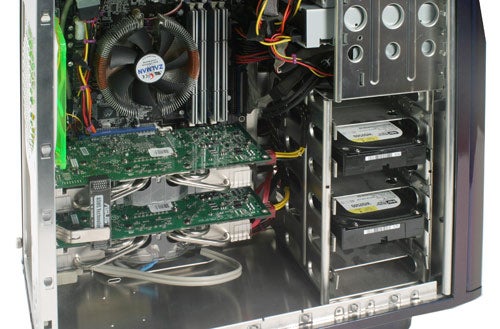 Before we started though, we noticed that the nVidia drivers had been set to Performance, which increases performance as the expense of image quality. nVidia are said to be second best to ATI in image quality at default settings, so there’s no way that we’d accept running at anything less. We therefore set it back to default.


A good move on Wired2Fire’s part is that it has created a second login called gaming, the intention being that you would only install game related features in that Login in order to reduce load on the system and increase gaming performance.


At the reference 3DMark06 test of 1,280 x 1,024 the Wired2Fire fails to take the prize, coming in slightly behind our reference platform with a score of 8740. However, at the higher resolutions it manages to keep ahead. This is because at 1,280 x 1,024 the test is still CPU and memory limited and as such highlights the poorly set up Wired2Fire. Above this, the graphics card comes into play and as the BFGs are clocked higher than our reference cards they take the lead.


We see this again with Call of Duty 2. At 1,280 x 1,024 and at 1,600 x 1,200 our reference system leads. But as soon as the resolutions increase the test ceases to be CPU and memory limited and the BFGs extra clocks kick in. Counter-Strike: Source is also clearly CPU and memory limited all the way, which is why it lags behind the reference platform. Quake 4 shows the same story.


So the machine is certainly fast but our benchmarks clearly show then that Wired2Fire pays the price for its choice of memory and the set-up, which means that it’s not getting the best out of the hardware supplied.


At the price we have to say we expected more from this system, in terms of both performances, component choice, set-up and the finish. It’s far from a terrible PC, but if you’re spending this sort of money you deserve something a bit special and due to the flaws we’ve highlighted we don’t think this qualifies.