Get ready for the adrenaline rush, the thrill of the race, the sensation of raw speed, the return of the best futuristic anti-grav racer in the business. Oh, and prepare for the misery of bleary eyes, the pain of crab-claw hands, the discomfort of accelerator thumb and airbrake finger. You see, whatever the merits of WipEout Pure as a showcase of technical superiority for Sony’s handheld, it also exposes each and every one of the PSP’s ergonomic shortcomings. But then, nobody at Sony would recommend that you play WipEout Pure for five hours straight without a break – it’s just their fault that you will find it so very hard to stop. 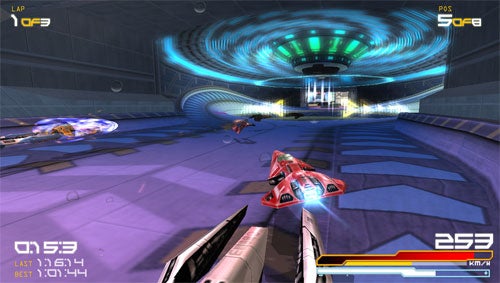 It’s the graphics that get you first. Along with Ridge Racer, this is the visual high point of the PSP’s launch line-up. The textures might not be as detailed as in Namco’s rubber-burning masterpiece, but it’s hard to complain in the face of the luminous trackside detail, the cityscapes, video screens and logos, the blue glow of the engine trails, the gorgeous weapon effects and, above all else, the sheer, blistering pace of the thing. Remember when you first saw WipEout on the PlayStation? Well, WipEout Pure does pretty much the same thing: you can’t quite believe it’s running on a handheld console.


And let’s not forget, WipEout has always been an audio-visual experience, and it was the music as much as the stunning futuristic graphic design that endeared the game to the clubbing crowd. Well, there’s nothing here with the impact of The Dust Brothers’ “Chemical Beats” from the original or Prodigy’s “Firestarter” from Wip3out, but with tracks from Photek, Royksopp and Aphex Twin, it’s clear that the brand still draws the dance scene’s biggest guns. Make no mistake, at full speed, with the soundtrack blaring out from headphones, this is the sort of game that leaves you slack-jawed and tuned-out every minute it’s on the screen. 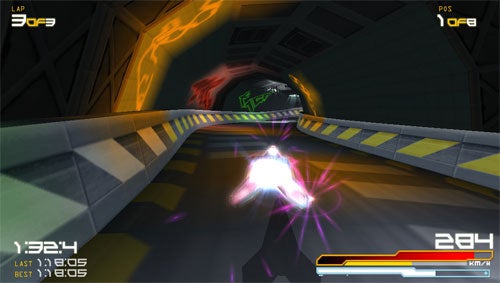 Which is good, because WipEout is the sort of game that doesn’t so much demand your attention as come around with some bruisers and make it clear that your attention isn’t going anywhere for a few hours. Pure, in case the name isn’t obvious enough, Is a return to core WipEout values, with more emphasis on high-speed racing, and less on the combat-heavy stuff that made WipEout Fusion such a chore. This means it’s intense, and also that you’re going to need practice and plenty of concentration to have a hope of getting anywhere with it.

OK, there’s a little more margin for error than there was in the original, but Pure will still come as a shock to those who haven’t played WipEout for some time. In most racing games, you can apply the basic techniques and tricks you’ve learnt in other racing games. In WipEout Pure, with its iconic anti-grav racers floating several feet above the track, you can’t. The lack of friction means you need to turn earlier, think faster, learn how to work with the airbrakes and find a way around the track that avoids scraping your paintwork along the sides. Couple this with the fact that the competition is generally tougher than the moronic, speed-handicapped fodder found in most racing games, and WipEout Pure makes you work hard for every win. It’s not enough to find the right racing line – intelligent use of the power-ups, ranging from speed boosts and a handy Auto-Pilot feature to a selection of groovy offensive weapons, is just as vital for victory. 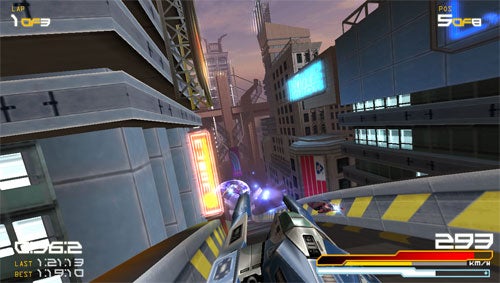 The initial Venom class does make things approachable for beginners, with a lower speed limit that gives you a better chance of keeping your anti-grav racer on track. Race through the Alpha and Beta tournaments, consisting of four tracks each, and you open an Ascension tournament comprising all eight. The stress really begins with the next class, Viper, with speeds that stretch your reflexes and concentration to something near their limits. If you reach those limits, however, you’re in trouble. Get a placing in the Viper Ascension tournament unlocks a further mode, Flash, featuring a pace so rapid that it seriously has you doubting that you’re up to it. You’d better be, as there are two more classes – Rapier and Phantom – to get through before you can really claim to be a master. 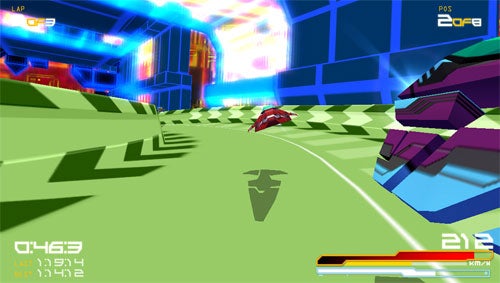 That’s not all. Winning races also opens up four classic WipEout tracks drawn from previous incarnations, stripped of landscape detail but with a neat neon ‘simulation’ effect that makes up for the loss. And while the additional Time Trial and Freeplay modes aren’t too surprising, WipEout also hits you with an option that gives you Pure in its purist form. The Zone mode puts you on four specially designed tracks where your sole aim is to keep racing as long as possible before your shields drop out. The catch? You keep getting faster as you progress, the pace starting fast then ramping up to impossible levels. To facilitate this, all textures are dropped in favour of slick, Tron-inspired visuals, and somehow this all combines to produce an incredibly hypnotic experience – a sort of Zen racing that surges ever on towards high-speed Nirvana.

For the more earthly pleasure of whipping friends and family, Pure comes with eight-player Wireless action, plus the added bonus of a mass of downloadable content. At the time of writing, the exact nature of the European online provision is unknown – nothing appears to be up and running, as of yet – but in the US and Japan there have been extra courses (including more WipEout classics), tournaments, racers and audio tracks. In other words, plan for a bigger Memory Stick Duo right now. 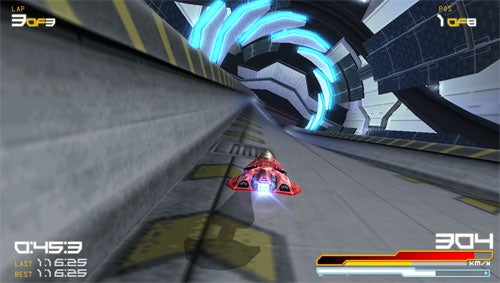 On any console, this would be a stunning game, but on a handheld, it’s simply magnificent. It’s not perfect – nits I might pick include an annoying tendency to hand tournaments to a single computer team if you fail to win every race and the fiddliness of starting multiplayer games – but it’s the WipEout we’ve all been waiting for in the half-decade since Wip3out came along. And that’s the problem – this is a game so absorbing that you can easily ignore the discomfort caused by trying to work the PSP’s analogue nub and shoulder buttons at the same time for hours on the end, not to mention the fact that your train reached your destination twenty minutes ago and you’re now well on your way to the boondocks. It’s a game that will make you miss important appointments and, thanks to your cramped hands, prevent you from accomplishing all but the most simple manual tasks. Suddenly the PSP’s battery life doesn’t seem so much a drawback as your only chance of salvation. Damn you Sony, did it have to be this good? 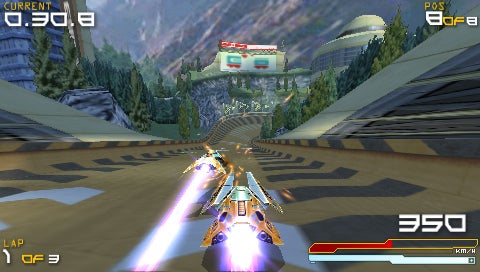 
The essence of WipEout distilled for Sony’s high-powered handheld format. It’s as potent and invigorating a tonic as it ever was in the last millennium.