Let’s backtrack nearly twenty-eight months to the European launch of the PSP. It’s hard to remember now after all the carping and moaning about the system’s lack of decent games, but it really did have a fantastic launch line-up. With Ridge Racer, Virtua Tennis and Lumines it proved that the promise of console-quality games in handheld format was no lie, and none of those games demonstrated this better than Wipeout: Pure. Dragging us back to the days when Wipeout caused a generation of club-goers to pick up a pad for the first time in years, it was an incredible showcase of light, colour, sound and energy, delivering cool 3D graphics at ridiculous speeds and revelling in the high-level pace that had made the series so great to begin with. In short, it was really, really good. 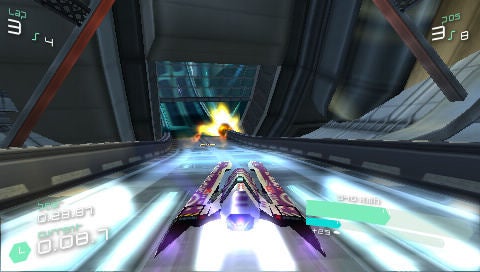 And now Wipeout: Pulse is a brutal, slap-in-the-face reminder of what Sony’s pocket monster can do. Visually speaking, I think it’s the handheld’s finest hour. Pure had its share of spectacular tracks, but Pulse’s twisting, undulating, looping tracks and futuristic backgrounds really are something else altogether. Everywhere you look there are telltale signs of a team prodding and tweaking as if to see what they can get away with on the format without bringing the whole frame rate crashing down. There’s more detail, more gorgeous, glowing lighting, more animation and just more scale to the courses.


Toss in the vapour trails of the anti-grav vehicles, the fiery blasts and plasma bursts of the offensive weapons and the pulses of energy visible beneath transparent sections of the track, and Pulse tries as hard as any game on any platform this year to dazzle your senses. Now add in the fact that this is all moving at high speed at a ridiculous, silky-smooth frame rate and it just gets better. Put your headphones in, whack the blaring trance and techno soundtrack up, and Pulse is arguably the most hypnotic and overwhelming experience available on a handheld format. 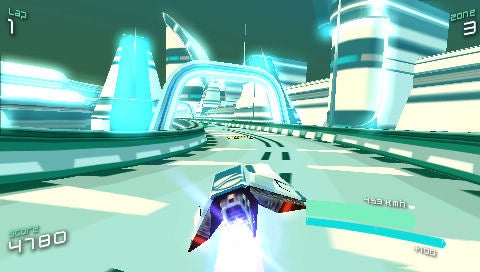 Okay, so it is ‘just’ more Wipeout. The whole point of Pure was to bring the series back to glorious basics, and once you’ve done that it hardly makes much sense to start sticking more unnecessary features back in. It’s still all about racing at high speed, keeping focused on the horizon, anticipating each twist and every turn and knowing when and how to use the airbrakes. It’s also still about using the randomly picked-up power-ups: knowing when to boost and when to let those missiles fly to best effect. 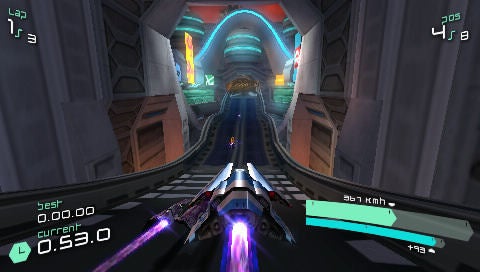 Pulse, like Pure, is a little more gentle on the less skilled player than the notoriously demanding original Wipeout. Collisions with the track-side end in sparks and friction, not a total slow-down, and your craft can generally take more knocks before exploding. However, if you don’t like Wipeout, or you don’t have the time or patience to get to grips with its peculiar mode of handling, then Pulse won’t make you change your mind. It’s basically a bigger, better Pure with improved multiplayer features and a tighter, more cleverly integrated single-player campaign. If you’re smart and remember what happened when Sony let its studios mess with the formula, you’ll probably regard this as a good thing.

Where there are changes, they’re very well considered. Pulse does away with Pure’s simple championship structure, where you went through a series of tournaments in one speed class then moved up to the next. Instead you work your way through several grids of events. Note ‘events’ not ‘races.’ In a nod to modern racers like Burnout: Revenge or Project Gotham Racing 4, secondary game modes like time trials, hot laps, eliminations and Pure’s magnificent Zone have all become events in the main career mode, instead of being shuffled off to the side. 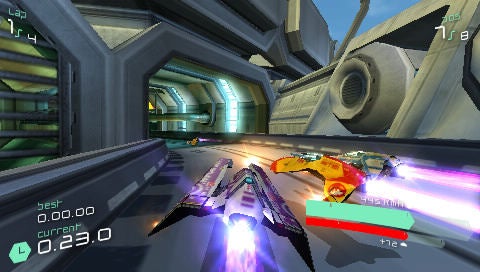 Getting podium positions in enough events unlocks further events, and eventually further grids, tracks, racing teams and so vehicles. The cool thing about this structure is that it adds variety to the game while also ensuring that you’re never left banging your head hopelessly against a brick wall of a race and unable to get any further. Just take a breath, give something else a go and come back if you want to later on.


Whatever event you choose, Pulse gets all the important stuff right. It’s not just the incredible sensation of raw, barely-harnessed speed that makes it such a treat; it’s the handling – demanding but learnable – and the excellent course design. In getting back to basics, Pure played its tracks relatively straight from the best of Wipeout. It was only in the downloadable track packs releases afterwards that the team really started to experiment. Now, with Pulse, they’ve got some ingenious new twists to show us. The track now has magnetic properties, allowing for some fiendish loops, fearsome lateral twists and one or two breathtaking 90 degree drops – the sort of thing we haven’t seen since the last F-Zero. 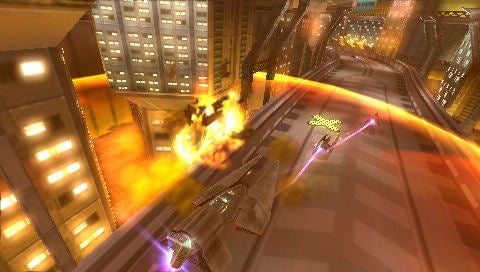 Even time trials are utterly thrilling because the feeling of speeding through a series of bunny hops or hurling your craft this way, that way and roughly every other way is so powerful. Wipeout has always been a bit like racing on a roller-coaster track, but here we’re talking Nemesis, not the sort you find at Blackpool. And if you think those curves are dangerous at the basic Venom speed class, just wait to play them on Flash, Rapier and Phantom. In fact, I’ll forget about Phantom – I’m not sure my tired eyes and battered reflexes will ever be up to the challenge. 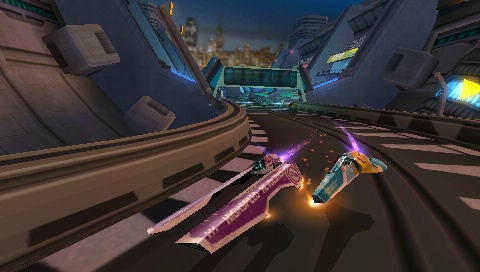 The races, meanwhile, are ludicrously intense. The AI plays fast, hard and mean. You have little room for error and if you’re not prepared to play nasty yourself then you’re also not prepared to win. My one major complaint about the game would be that this does lead to a rather off-putting initial difficulty level – especially if you’re a Wipeout newbie. That said, if any game is worth an hour of poor results while you get used to the controls, it’s this one. The other big drawback is that the controls haven’t got any more comfortable since last time. It’s lucky that you can play and win using the digital D-pad, because the combination of analogue nub, face buttons and shoulder bumpers is guaranteed to cause agony after a couple of hours of racing. Damn you, Sony Studio Liverpool, for making this game so addictive!

Personally, I like the fact that the once separate Zone mode is now a part of the main game. The idea is Wipeout in its purest form: no opponents, no power-ups, just graphics stripped back to a cool, Tron-like aesthetic and a track that gets faster and faster the longer you race on it. Your only aim? To keep racing as long as you can before track-side collisions result in your craft’s demolition. It’s a perfect test of skill and concentration, and as mesmerising as video-games can get. 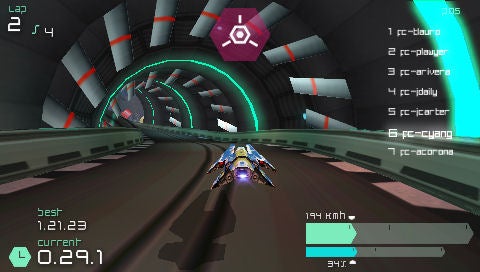 And now to the icing on the cake. PSP detractors – and I’ve often labelled myself among them – often forget how strong the machine’s online presence is. Games like Syphon Filter: Dark Mirror, the SOCOM series and MGS: Portable Ops have been able to command a sizable online following, and Sony has supported the system and its first-party games with download packs and added content. Well, Wipeout: Pure set the standard with its themed packs, and now Pulse adds online play and the ability to create custom ship skins online and download them to your PSP for use in online and offline competitions. You can finally go to your local Wi-Fi enabled coffee shop and humiliate your rivals from there – provided the thought of appearing like a slack-jawed, dope-addled, cursing prat in public doesn’t put you off the whole idea.


It doesn’t for me. Frankly, I love this game. I’m at this very moment resisting an ignoble urge to stop writing, get the PSP from my desk drawer (why didn’t I lock it and ask my wife to hide the key?) and just ‘check’ for a few hours that the game is as good as I think it is. Yes, you could argue that a) it’s not innovative, b) it’s not a huge step forwards from Pure and c) it makes a lot of use of a fairly small selection of proper courses, but I’d reply that a) who cares? b) why worry? and c) as the speed and challenge escalates, that never becomes a problem. 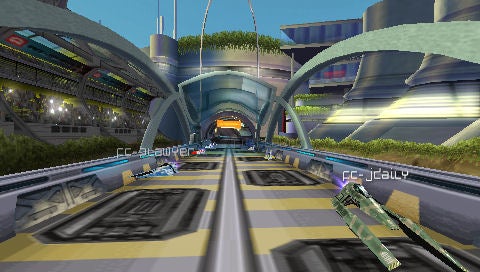 I suspect that Wipeout is still not a racer for everyone, but that doesn’t stop it being one of the best on any handheld platform. So if you have any fondness for Wipeout and a PSP then it’s time to give yourself a Christmas treat. Pulse will make you love your PSP once more, and it also cements Wipeout’s position as the king of futuristic racers.


Pulse isn’t the most revolutionary sequel, but it tweaks and updates the excellent Wipeout Pure in all the right places. A must-have for fans of the series or friends of the PSP.