Exclusive to Wii U
Love it or loathe it, Wii Fit was a massive hit for Nintendo. With over 22 million copies sold and a sequel that racked up over 20 million, it’s still one of the most successful games of all time. It’s no secret that Nintendo could do with some big sellers to give Wii U a boost, and what could be better than a return for one of Wii’s biggest hitters? The only surprising thing is the form this new addition takes.

Basically, Wii Fit U isn’t so much a sequel to Wii Fit and Wii Fit Plus as a Wii Fit compendium, working with your existing Wii Balance Board and bringing together activities from the earlier games, along with a handful of new ones. The old ones return with minimal tweaks and little sign of any visual upgrade. The old muscle and yoga workouts look and work pretty much as they did on Wii, and the same goes for such old favourites as Step, Hula Hoop, Headers and Ski Slalom. Your first impressions of Wii Fit U might be that it’s still the same old game. 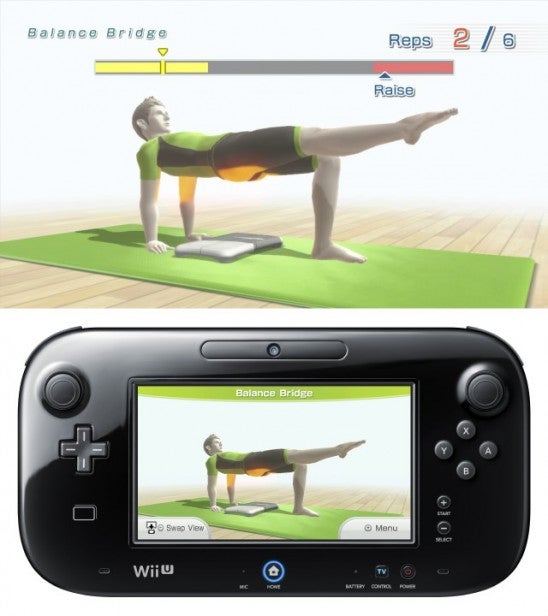 Wii Fit U even starts in much the same way as Wii Fit. You begin by setting up your balance board (having dusted it off from its time in the loft), then start a new profile, entering your age and height before starting off a body test. This checks your balance and your weight before dishing out a Wii Fit age and a body mass index (BMI). There may be tears when this info comes through.

After this it’s time to set some goals. Like Wii Fit before it, Wii Fit U only really works if you’re prepared to keep coming back over an extended period. By default, it suggests a reduction in your BMI over a two-week period, though you’re allowed to tweak this higher or lower to fit your own circumstances/pitiful lack of will power. Once that’s over, it’s time to get exercising.

How you do this is up to you. Wii Fit U takes a leaf out of Wii Fit Plus’s book by structuring its programmes a little better than Wii Fit did. If you like to go freestyle, you can still tackle exercises one by one, racking up the Kcals in your personalised Wii Fit U piggy bank, with the game suggesting a choice of two further exercises every time you finish one. Doing well in one exercise may also unlock additional, more advanced versions, giving you some kind of progression. Alternatively, you can get Wii Fit to recommend routines to, say, give your heart or your muscles a workout, or use the Personal Trainer feature to put together a series of exercises that will burn a set number of calories or take a specific period of time. The best thing about Wii Fit U is that the exercises are fun. Sure, the Yoga poses and the Muscle workouts are a bit dull, in the way that you might expect yoga poses and muscle workouts to be, and simply doing them on the balance board under the watchful eye of a virtual trainer doesn’t make them any less so. Once you get to the balance exercises and aerobic exercises, however, it’s a whole different kettle of fish. Nintendo has a great understanding of what makes an activity fun, and Wii Fit U demonstrates this time and time again.

For example, walking on the spot on the balance board is not that entertaining, but doing it under the pretence that you’re riding a bicycle, steering by tilting the Wii remote and racing through checkpoints against a time limit, somehow is. The same goes for whacking balls back at a wall of destructible panels to rack up points, shadow-boxing or pulling off kung-fu moves. It also goes for shifting your weight to ski left or right through slalom gates, or leaning backwards and forwards while pumping with the Wii remote for a rowing contest.

Wii Fit U also excels at providing activities that – frankly – are marginal workouts, but work brilliantly as mini-games. Who can resist ducking out from cover to throw snowballs at fast-moving Mii characters, or jumping up and down on a trampoline, performing tricks. There’s an Obstacle Course game which comes close to being a Balance Board-based physical platform game, and a few games which test brains as well as brawn, asking you to solve simple sums with the aid of some hip waggles, or shift your weight to shift platforms so that balls fall into the right coloured chutes. 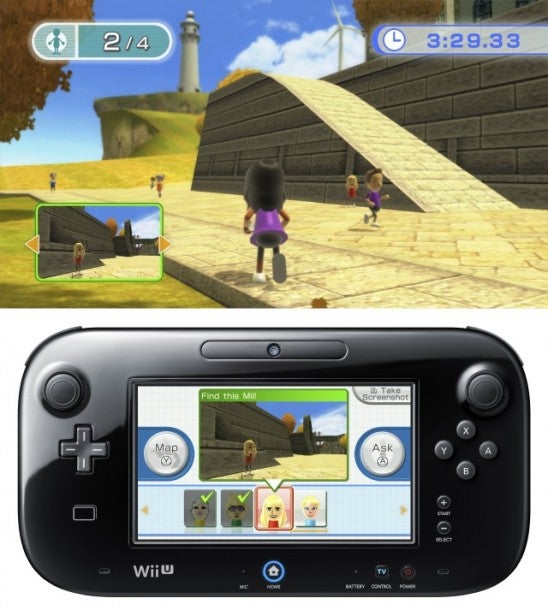 Is there anything that the Wii U brings to the party? Well, a few new games use the Wii U Pad as a first-person view, helping you locate Miis in an orienteering test around the Wii Sports island, or collecting fish on a sub-aqua adventure. The best of the new activities involve holding it as a tray while you deliver wobbly desserts around a crowded restaurant, or using it as the sights for a water-cannon as you  blast oncoming Miis.

Otherwise, the major new addition is a new section full of dance activities, where a spot of Flamenco, Salsa, Hip-hop or jazz dancing can help you burn a few calories or get your muscles toned. These work well, but are pretty much variations on a theme. Otherwise, you have the option to play most of the games using the Wii U Pad instead of the TV screen, or can take photos to track your changing appearance as the weight (fingers crossed) drops off.

In fact, the biggest change Wii Fit U makes is the addition of the brand new Fit Meter peripheral. This small unit, roughly the size of a flattened ping-pong ball and designed to be clipped to a waistband or belt, acts as a pedometer and altimeter, reporting back to Wii Fit on what you’ve been up to while you’ve been away from the balance board. While you’re away, there’s a display to show your Mii profile, the steps you’ve taken and the calories it thinks you’ve burnt.

When you return, the sensor can update the Wii U through an IR link to the Wii U pad, and the steps and calories are added to your Wii Fit activity log. It shows that Nintendo hasn’t ignored the developments in Fitness gaming, what with the Nike Fuelband tie-ins of Kinect Fitness on the Xbox 360, but as always there’s a Nintendo spin. For example, you can set yourself goals specifically for the Meter, and Wii Fit U will track your progress in terms of the walks you might have done in famous global locations. Instead of walking the kids to school, you’re perambulating around Central Park. 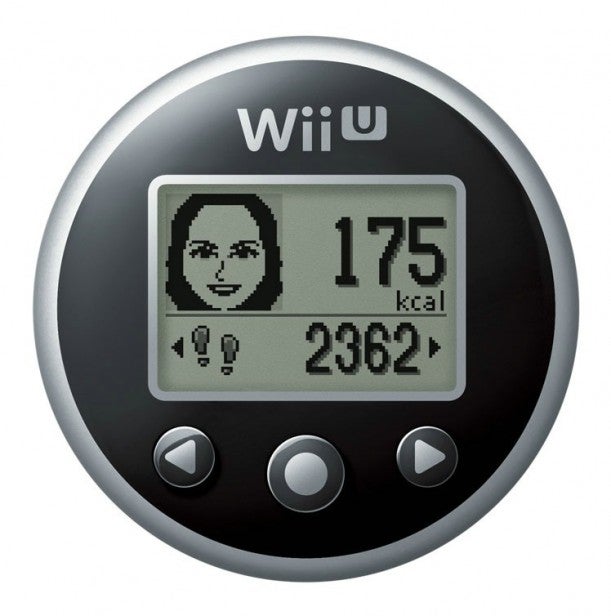 Of course, the Fit Meter isn’t the only bit of kit you’ll need for Wii Fit U. You’ll need a balance board, obviously (£80 with Wii Fit U and Fit Meter) and you’ll already have a Wii U Pad, but for many of the activities you’ll need a Wii remote with a Motion Plus add-on (or the later Wii U Remote Plus). Try the dancing activities and you’ll need two, which you might not have to hand. In short, it’s an easier game to recommend to those who still have all their old Wii stuff than Wii U adopters.

In the end, it’s hard to know quite what to make of Wii Fit U. On the one hand, it’s slightly disappointing that the core Wii U experience – not to mention the graphics – hasn’t had much of an overhaul in the last five-plus years, and that core is now looking and feeling dated in comparison to the rival products we’ve seen from Microsoft, Ubisoft and EA Sports on Xbox 360, Xbox One and PS3. On the other hand, Wii Fit U is just more fun than its rivals, particularly if you can get the whole household playing and start a friendly rivalry on the activity leaderboards. This is more likely to get people training and keep them training than flashy graphics or a trying-to-be-hip urban style. And if you haven’t got a household to play with, there’s also an online gym feature, where you can workout with others in a virtual gym through the Wii U’s Miiverse.

The good news is that, if you have a Wii U and an old balance board, you can try it for free for a month as long as you download it before the end of January. If you like it you can purchase a Wii Fit Sensor (£20 on its own) and then unlock it for good.

On the one hand, Wii Fit U isn’t a huge step up from Wii Fit, and a handful of new activities doesn’t cover for the reappearance of so many barely changed old ones. On the other hand, no other fitness game works so hard to entertain you while you’re working out, and Wii Fit U is easier to get into and easier to keep coming back to than the rest. Throw the new Fit Meter into the mix, and it’s still one of the best ways to lose a few festive season pounds.