Every now and again we get e-mails here from companies asking if we’d like to review their products. Sometimes we’re interested, sometimes not. And sometimes, just sometimes that invitation comes from Wicked Lasers, whereupon the unanimous consensus was, unsurprisingly, to the effect of “we need to look at ”everything!”” It doesn’t take a rocket scientist to guess that, in an all-male, fairly geeky office, lasers are universally accepted as pretty darned cool. You ”have” seen Star Wars, The War of the Worlds and Moonraker right?

Alas as we don’t yet have a Gadgets section, or any roadmap with one featured, finding a reason to justify playing with lasers is pretty difficult. Except, that is, that Wicked Lasers offers a particular model called the Sonar II which packs a particularly interesting laser diode with which all of you should be familiar. A Blu-ray laser to be precise, exactly as sported by the PlayStation 3 and, in fact, any other player you care to name. That, frankly, was all the justification we needed to have a unit shipped over from the states – all $1,999 (~£1,000) worth of it.


Importantly at this price, build quality is impeccable. The Sonar II, according to the spec sheet, is constructed from aircraft grade aluminium and you can believe it holding the device. At 155mm long with a 20mm diameter it isn’t small, and with a pair of CR123A batteries, as usually seen in cameras, it’s pretty weighty too. That said, the weighty nature simply adds to the sensation of holding a quality piece of equipment – exactly how a £1,000 laser pointer should feel. The white colouring and addition of an official Blu-ray sticker at the end of the casing just adds to the air of coolness exuded by the device.


As the name rather unsubtly suggests, the Sonar II is the second generation of Wicked Lasers’ Blu-ray sporting pointer. Whereas the original used a diode that was pulled straight out of a Blu-ray player, WL has managed to find a source of diodes for the Sonar II. Clearly, not having to throw away a butchered Blu-ray player for every Sonar II made can only be a Good Thing. 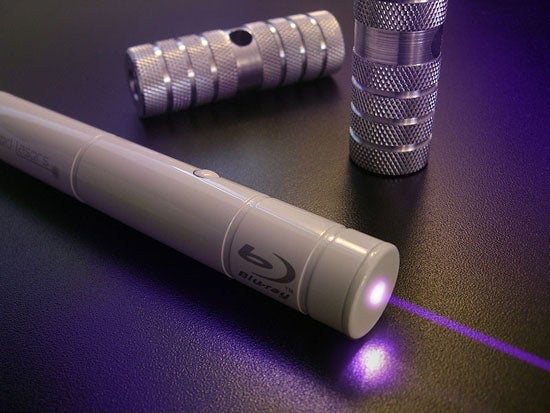 The Blu-ray diode inside the Sonar II produces a 405nm beam packing 60mW of power, which might not sound like much but when you consider that the entire beam is converged on a circle of around 2.5cm2 at a distance of 10m it sounds more impressive. It is partly because of the extremely short wavelength that the laser can be so powerful. A quick GCSE (O-Level to the less youthful among you) recap reminds us that higher frequency (shorter wavelength) equals more power. On the subject of power, Wicked Lasers strongly advises using lithium, rather than alkaline batteries as they offer significantly better battery life for the same power output.


Because of the diode used, it’s important to remember that these lasers can in many ways be more dangerous than a red or green laser. As there is next to no infra-red radiation being emitted by the diode, it’s harder to tell just how much energy is being focussed at the beam’s point. Shining the Sonar II at my hand at about 40cm distance it was still possible to feel some heat, but most of the 60mW of energy is going to be towards the ultra-violet end of the spectrum so the beam is doing more damage than you might realise.


That’s borne out in the Sonar II’s classification as a Class IIIb laser product. In a nutshell, that means that direct exposure to the eye of as little as 100th of a second can and will cause permanent retinal damage and even diffuse exposure could be dangerous. Hopefully Wicked Lasers will start providing a set of protective goggles for this wavelength as it does with its other pointers.

That 405nm wavelength is also particularly important in respect to the disc format it is used for. As many of you will doubtless be aware, data is stored on CDs, DVDs, HD DVDs and Blu-rays, in loose terms, as a series of ones and zeros printed onto the disc’s surface as pits. Actually it is the transitions, or lack thereof, from a pit to a “land” (no pit) and vice versa that represents a ‘bit’ of data but that’s not particularly important. 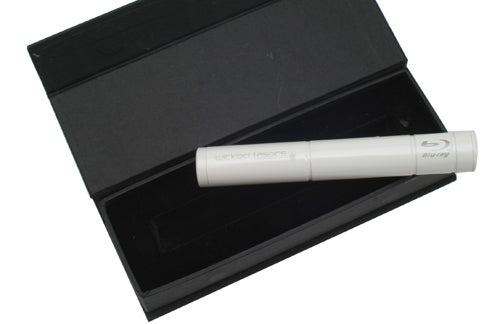 What is important is that the wavelength of light used dictates how small these individual bits of data can be, and what data density is possible on a disc. Thus a CD using a 780nm red laser can pack in 700MB, a DVD with a 650nm laser crams about 4.4GB on a single layer while both HD DVD and Blu-ray discs are read with 405nm lasers, offering about 15GB and 25GB per layer respectively. The difference in capacity between Blu-ray and HD DVD is related to the disc itself. In simple terms, HD DVD manufacture is based in that of DVD, so it wasn’t possible to pack data as densely as Blu-ray, which used an entirely new manufacturing process and is thus arguably the more technologically advanced format. Seeing as the format war is fought and won by Blu-ray now, it’s a bit of a moot argument anyway – what’s important is that without the use of a 405nm blue laser, there would be no HD discs as we know them.

Interestingly, although Sony decided to dub its format Blu-ray, colour wise the diode actually produces a beam closer to the violet end of the electromagnetic spectrum. In fact, the Sonar II, and by association Blu-ray, laser beam is very close to being too short for the human eye to even see. Admittedly, when shone onto a white surface, the dot of the laser ”is” blue, but on any other surface it is decidedly purple, as is the beam when visible in the air. I guess Violet-ray didn’t have the ring to it that Sony was looking for.


To really get the best ‘wow’ factor out of the Sonar II you need to use it in a dark room, or at night. As luck would have it I was able to take the laser out into the countryside a fair distance from the nearest town, on a fairly humid night with some pretty low-laying cloud. The end result of this was a complete lack of ambient lighting and lots of moisture in the air, meaning that the laser’s beam was clearly visible all the way to the cloud base, upon which a large purple circle was visible.


The only way I can describe the effect is “bloody fantastic” and it is to my great shame that my camera was unable to get any decent photographs. Frankly, it would almost be worth investing in an SLR and decent tripod just for taking photos of the Sonar II.


Yes, the Sonar II is ludicrously expensive, but it also has an undeniable air of coolness and exclusivity that you won’t find anywhere else. What else can I say, it’s a Blu-ray laser pointer for goodness sake!


Arguably useless, but undeniably awesome; if you can afford to spend £1,000 plus VAT, plus shipping from the US on a gadget that’s bound to impress your mates, the Sonar II Blu-ray laser pointer is the one to get. (We can probably expect Roman Abramovich to be ordering one for each of the Chelsea squad then – ed.)