What is the Wharfedale Diamond 220 HCP?

The Diamond 220 HCP is a 5.1 standmount speaker package and the successor to the brilliant Diamond 100 HCP system launched in 2013. It’s based around speakers from Wharfedale’s new Diamond 200 series, including the Diamond 220 standmounts at the front and rear, the 220C centre and the SPC-10 powered subwoofer (the middle model in the company’s PowerCube range).

You don’t have to settle for this configuration though – the 220s can be swapped for the 230 or 240 floorstanders to create a larger and more powerful system, but the 220’s standmount line-up should offer a nice balance of power, price and living-room friendliness. The price of this package is £50 less than the sum of the speakers, and a good £100 less than the Diamond 100 HCP. 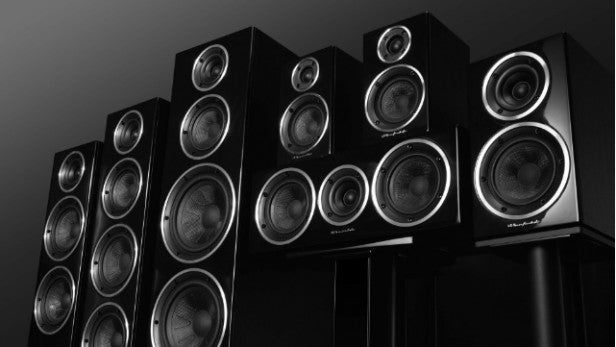 We loved how the Diamond 100 HCP system sounded, but our main criticism concerned the system’s underwhelming build quality. The speakers’ plasticky fascia and plinth wasn’t quite up to the standard we expected for the money. Taking this on board, Wharfedale has upped its game considerably, resulting in a design that looks and feels more luxurious than its predecessor. 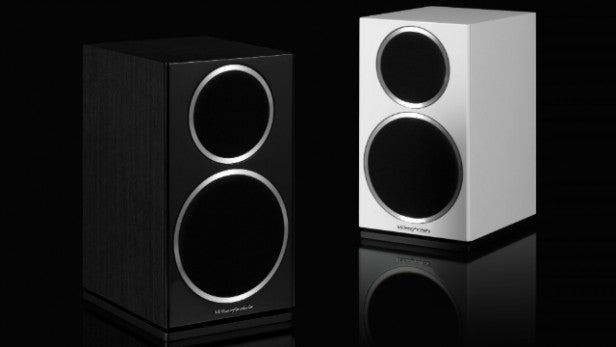 The system comes in a choice of black, white, walnut and rosewood finishes, and our black version looks absolutely gorgeous. The Diamond 220’s gleaming lacquered baffle and silver driver surrounds form an eye-catching coalition, while the removable round cloth grilles and black wood grain cabinet complement the look nicely. 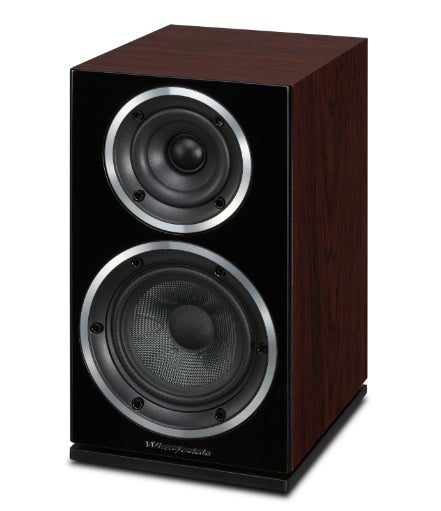 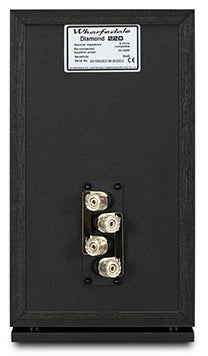 Playing devil’s advocate, some might deem the 220’s boxy shape too conventional for modern living rooms where curvier designs are de rigueur. The contoured cabinets of Q Acoustics’ 2000i system are more elegant, but if you prefer the traditional approach you won’t be disappointed. 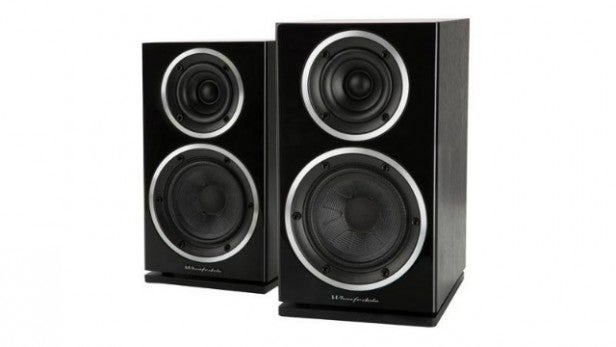 The 220s measure 315mm high by 227mm deep. If that sounds too intrusive then you could investigate the more compact Diamond 210 standmounts, a pair of which sells for £50 less than the 220s.

The plinth at the bottom not only provides a sturdy base but also creates a 5mm gap underneath the cabinet, which is crucial to the speaker’s Slot-Loaded Distributed Port bass system (more on that later).

Naturally the 220C centre speaker shares the same design traits as the 220, including the one-piece lacquered baffle, silver driver surrounds and Slot-Loaded plinth, but it’s horizontally aligned and sports two bass drivers instead of one. It’s also big and bulky, but the classy styling stops it being an eyesore. 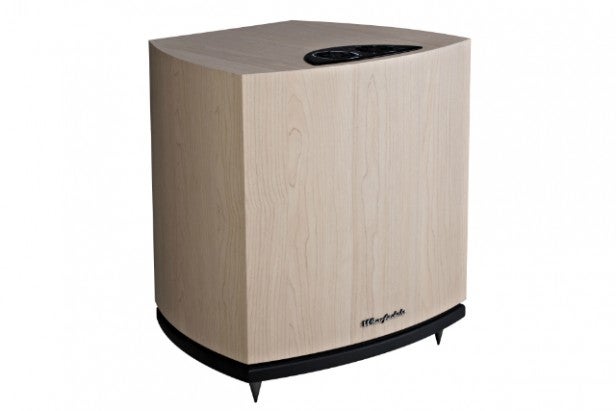 The system employs the same SPC-10 PowerCube subwoofer as the Diamond 100 HCP system, which Wharfedale feels is still the best match for these speakers and ideal for average-sized living rooms. Although it’s not actually a cube, it is pleasingly compact and bijou, with a fetching black wood finish and robust build quality. 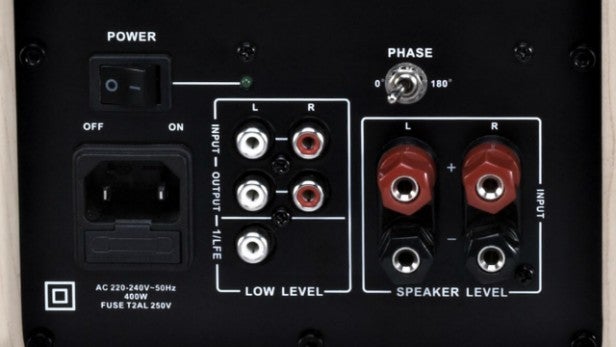 Knowing that the SPC-10 might be hard to reach, Wharfedale has placed the volume and crossover controls on top. The dials are set into a rubber panel, and thanks to a built-in sensor they light up when your hand approaches. On the back are more sockets and switches, including line-level stereo input and output, LFE input, speaker-level input and phase inversion switch.

Given the positive response to the Diamond 100 series’ sound quality, Wharfedale has been careful not to throw the baby out with the bathwater in creating its successor. As a result, the Diamond 200 series is more about evolution than revolution, bringing tweaks and refinements to the 100 series’ technology (most of which filtered down from Wharfedale’s high-end speakers). 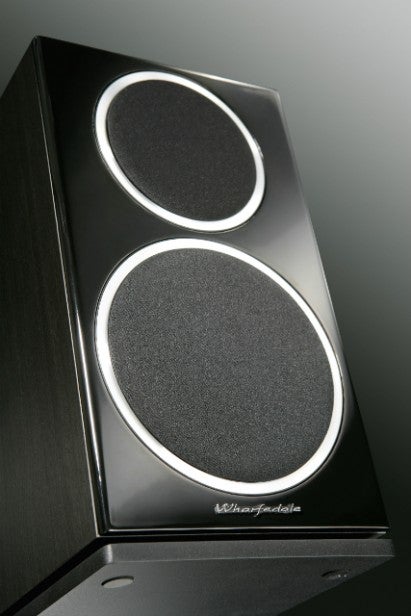 The most significant improvements are in the cabinet. Taking its cue from the company’s upmarket Jade speakers, whose cabinets are crafted from a matrix of materials called Crystalam, the 200 series uses a sandwich of particleboard between layers of MDF that reduces panel resonance and sound colouration.

The Slot-Loaded Distributed Port bass system introduced in the 100 series has also been refined. Instead of using a port on the back like most speakers of this type, air exits from a port on the bottom within the slot created by the plinth. The system has been improved with an added degree of airflow control at the port exit to reduce turbulence and low-frequency distortion. 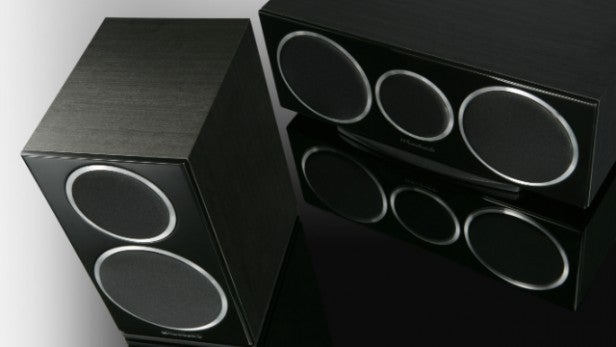 Not only does this result in enhanced bass output with less ‘chuffing’, but also it allows you to position the speakers much closer to a rear wall than you can with front- or rear-ported designs, making them easier to place in typical living rooms.

What’s more, the Slot-Loaded system has now been added to the 220C centre speaker, which makes it a much better match for the 220s – its predecessor, the 101C, used a downward-firing reflex port but not the plinth, which is crucial to the Slot-Loading system.

The driver array stays pretty much the same as the 100 series. The 220 and 220C use 130mm woven Kevlar cones (complete with semi-elliptical ‘break-up’ areas on the surface) and 25mm soft-dome tweeters. The SPC-10 is endowed with a 10in long-throw driver and musters 215W of power.

As soon as Howard Shore’s orchestral refrain kicks in at the beginning of The Hobbit: An Unexpected Journey you know you’re dealing with a high-calibre system. The silky-smooth strings positively float from the speakers with a polished, airy quality.

It keeps this up throughout the movie, resulting in a completely absorbing and immersive listening experience. Its outstanding detail reproduction ranks right up there with Q Acoustics’ 2000i as the best we’ve heard from a package in this price bracket. The chirping birds and insects that accompany any shot of Bag End are remarkably lucid, likewise the rustling bushes as the spiders crawl through Mirkwood. 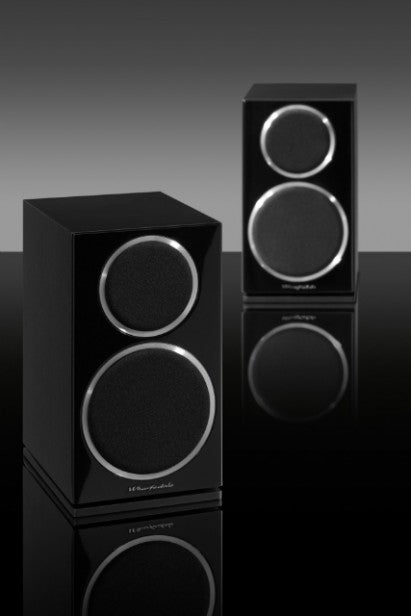 But it’s not just obvious high-frequency effects that benefit – the speakers also tease out subtle texture in effects you might not otherwise notice, giving them an impressive sense of authenticity. For example, horses’ footsteps have a slightly fluffy edge to reflect the fact they’re hitting grass, while Thorin’s gruff voice is peppered with gentle flecks of sibilance as he delivers his speech inside Bag End.

This fascinating texture and detail permeates the entire soundstage thanks to the use of identical front and surround speakers. As the dwarves make their way through the forest in a downpour, you’re surrounded by crystal-clear droplets of water hitting the ground.

Impressive, but all this top-end sparkle counts for nought without the midrange and bass presence to back it up. Thankfully Wharfedale doesn’t let us down. The terrific PowerCube sub is a little bundle of energy, delivering deep, thumping bass as the dwarves and trolls engage in battle. The trolls’ footsteps are weighty yet remarkably tight, making it feel like they’re actually stomping on our floor.

When the dwarves sing ‘Blunt The Knives’ earlier in the movie, their rhythmic tapping on tables and floors is quick and accurate. The system’s talent for texture means you can actually tell they’re banging on wood.

Even more impressive is how seamlessly the sub blends with the speakers – at no point could we tell where it was coming from.

Power and scale isn’t a problem. Thanks to the superb Slot-Loaded system, the 220 speakers muster impressive bass weight on their own – boosted considerably when placed against a rear wall – but when paired with the PowerCube the result is gobsmacking. The Stone Giants battle sounds absolutely massive, with thunderous explosions filling the room.

Tonally, the Wharfedale is attacking but not overly aggressive, steering well clear of brashness even with the volume cranked up loud. Meanwhile, the centre speaker’s revamped bass system gives dialogue depth and body, making it sound astonishingly articulate and authoritative.

And if you need more evidence of the Wharfedale’s brilliance, it also does a superb job with music. As with movies, the sound is superbly textured, laying bare the subtleties in voices and instruments. Frank McComb’s dextrous piano solos in his Live at the Bitter End album are replicated with a clean, twinkling tone, while the 220s’ deft bass adds subtle depth to low notes. The speakers also handle dynamic shifts with ease and tackle dance tunes in an agile and energetic fashion. That’s pretty damn impressive for a so-called ‘budget’ system. 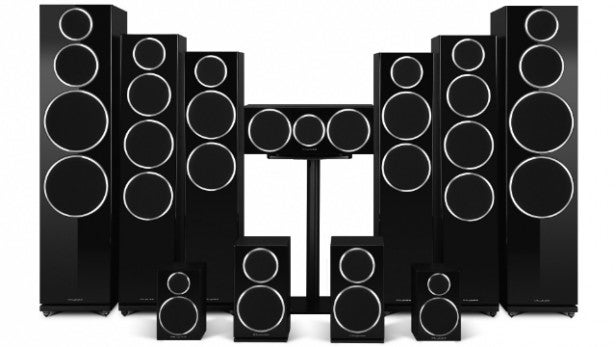 Should I buy the Wharfedale Diamond 220 HCP?

As you can tell, we’re pretty enamoured by the Diamond 220 HCP system, and we think you will be too. It’s a powerful, articulate and refined performer, sounding fabulous whether you’re blasting a Hollywood blockbuster or spinning your favourite CD.

It’s astonishingly good value for money too. Wharfedale has greatly improved the look, build quality and performance but somehow shaved £100 off the price of the Diamond 100 HCP, which makes it a no-brainer when shopping around for an affordable speaker system.

Admittedly the boxy design might not suit all living rooms, but as far as sound quality is concerned the Wharfedale is the bee’s knees and the first system we’ve heard that’s capable of knocking the Q Acoustics 2000i off its perch.

The Diamond 220 HCP is a sensational-sounding speaker system at a great price, made all the better by its improved build quality.