Western Digital is most famous for its stupendously good Raptor line of performance hard drives that are generally considered to be the fastest consumer hard drives on the planet. However, it will come as no surprise that it also produces a vast range of other hard drive based storage solutions. And, today I’m looking at probably the cutest one of the lot, a diddy little shiny black portable hard drive known as the Passport. 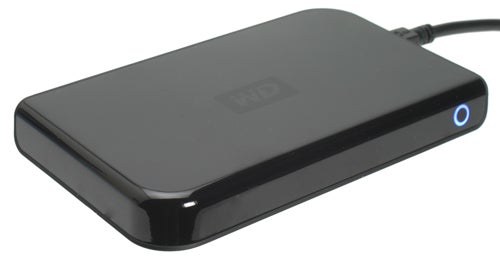 Just like the 160GB Seagate portable hard drive we looked at a while ago, the Passport is based on a 2.5in notebook hard drive that uses a single USB connection for power and data connection. By doing away with a mains power adapter, these drives are small enough to be slipped into a jacket pocket or a small bag and taken with you anywhere. The Passport is available in 60GB, 80GB, 120GB, 160GB, and 250GB versions so there’s plenty of options if you’re on a tight budget.


Some computers aren’t able to provide sufficient power over a single USB connection so the use of a special two-to-one USB cable is required. Unfortunately WD doesn’t include one of these with the drive so you have to order one separately if needed. You do get a conveniently sized 30cm standard USB cable as well as a quick installation guide, though.


Western Digital clearly has its finger on the design pulse as the Passport is one superb looking device. The glossy black top surface looks as good as ever – piano black certainly seems to be the flavour of the day with Samsung’s current line-up of notebooks and the majority of new TVs also sporting this finish – and the matt finish of the bottom creates a perfect contrast. No matter what the fashion industry tries to tell us, nothing will ever truly be the new black. 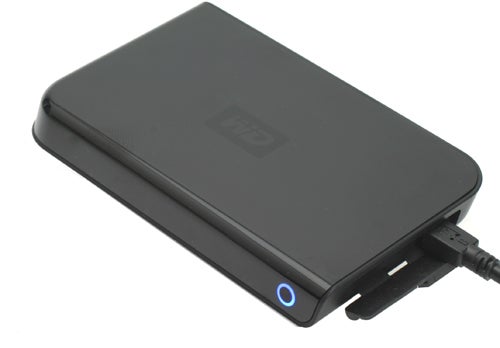 The perfect shininess of the top is only interrupted by a subtle etched WD logo in its centre and a small blue ring on one of the sides. When the drive is powered up the ring glows a deep shade of blue and flashes a lighter brighter shade as the drive is accessed. Stylish and subtle seems to be the aim of the game and the Passport is playing a blinder.


On its underside the Passport has four little rubber feet that help prevent the drive from sliding around and consequently prevents it picking up too many scratches. However, while the drive may be protected while it sits on your desk, it isn’t likely to hold up to the abuses of a portable life.

Unlike a notebook, say, that will either have a separate case or some sort of protective cover, a portable hard drive is liable to be thrown into a bag completely unprotected where it will rattle around along with (at least in my case) a pen-knife, a torch, a phone charger, and all manner of other detritus. I think a week with me and the Passport would look decidedly worse for wear. However, a small fabric bag like the sort you get with a pair of glasses should be sufficient to prevent the majority of damage.


Hidden away behind a rather oversized rubber flap, the USB connection is of the mini variety that are a standard for this type of device, so if you do lose the supplied cable you shouldn’t have any trouble finding a replacement. The use of a protective cover for the USB socket helps to prevent dust ingress and provides an extra level of splash protection should you knock your coffee over or drop your orange juice. However, be under no illusion, the Passport is not what you would call water proof. Nor indeed does it strike me as rugged. One short drop could prehaps prove disasterous.

All that said, because of the weight and bulk saved from not ruggedising the Passport, it is small and light enough to slip into a shirt or jacket pocket unlike the much tougher Seagate drive. Indeed, the Passport weighs a featherweight 184g compared to the Seagate’s hefty 352g and it’s also nearly half the thickness and a good deal narrower.


To test the performance of the Passport, I ran through our usual set of tests which consist of running HD Tach, to give us some raw performance figures (and a pretty graph), followed by a couple of file transfer tests. We copy a 1GB video file to and from each hard drive and time how long it takes each way, we then do the same with a folder of 1,943 photos of varying sizes that in total is 496MB.


Given their identical capacities, it makes complete sense to compare the performance of the Passport with that of the Seagate drive but to give an idea of how these compare to larger desktop external hard drives I’ve also included results for a 400GB Seagate drive that we have in our office. 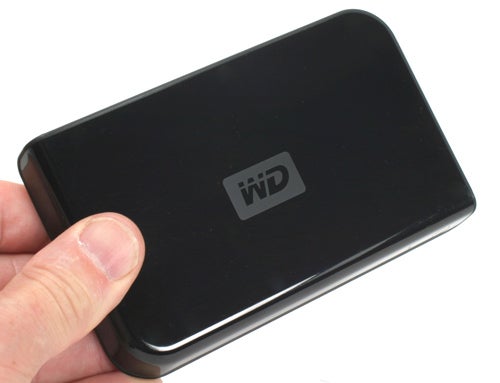 Looking at the HDTach results, it is instantly evident the USB interface is the common bottleneck for all these drives and they are limited to a maximum of just over 30MB/s transfer rate. Random access times are also quite slow with the 400GB desktop drive only sneaking ahead by the tiniest of margins. Our file transfer tests showed a similar trend with only a few seconds here or there differentiating each drive.


Included on the drive is Western Digital’s own backup/synchronisation software, known as WDSync. It enables you to synchronise your emails with Outlook and Outlook Express, your favourites with Internet Explorer and Firefox, or just specify individual files and folders. Backups are compressed and stored with 128-bit encryption so everything is as secure and small as possible. Backups can be initiated as soon as the drive is inserted and will happily run in the background keeping disturbance to a minimum. Unlike a lot of proprietary software, WDSync is a pleasure to use, having a simple interface and clear instructions. Overall it makes a great addition to this already impressive product.


The Western Digital Passport portable hard drive is stylish, lightweight and has enough capacity to satisfy most people’s needs. So, if style and weight are your highest concern it won’t fail to satisfy. However if, like me, you require something that will stand up to a bit more punishment you may be best looking to the more rugged options like Seagate’s portable hard drives or those from Philips. 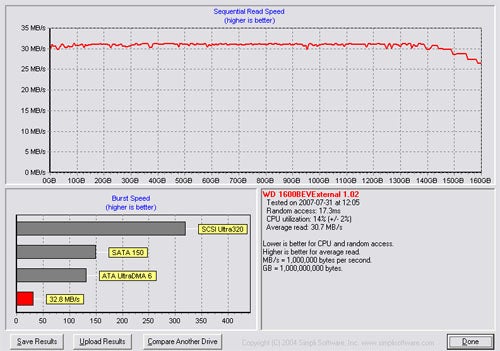 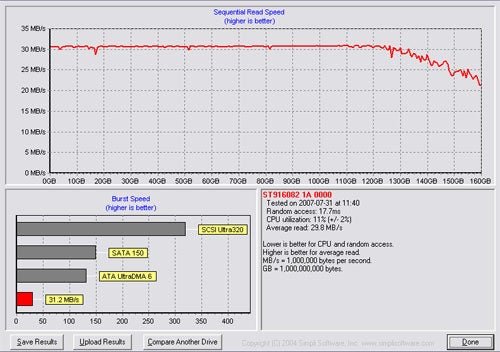 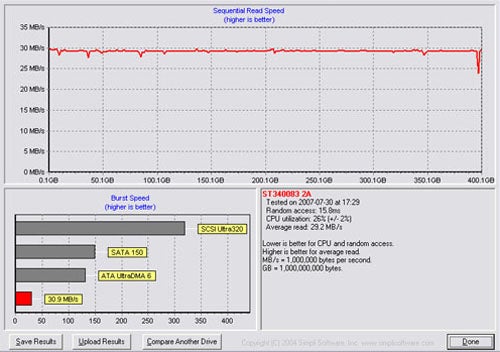