With some games it’s all about winning: you’re out to beat the game, get the high score, open the next world, level up, and reach the end of the tale. It’s not that the gameplay itself isn’t enjoyable, but it’s the string of goals and objectives that keep you coming back for more. A few games, however, are different – with them, it’s all about the sheer joy of play. I guess Pilotwings 64 is the classic example: true, there were feats of derring-do to cope with and missions to complete, but wasn’t it mostly the fun of riding the air currents and handling the vehicles that kept you playing in a cheerful, half-dazed state? Think of those other games where you forgot the main objective for a while and just messed around with the toys in the playpen instead – think of Zelda, GTA: Vice City, getting the gravity gun in Half Life 2. Sometimes, just ‘playing’ can be enough. 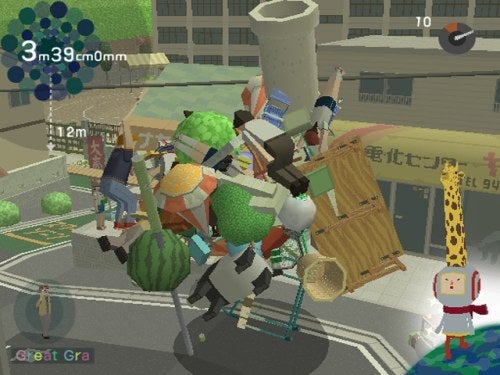 Well, We Love Katamari appeals to the same sort of feelings. Put simply, it’s a game that makes you feel good. In fact, it’s a game that should make anyone feel good. It’s almost as if the designer, Namco’s Keita Takahashi, went back to the innocent times before we all became obsessed with one-kill headshots, urban gang warfare and realistic driving sims, and just wanted to make something that was fun to play.


As with its prequel, Katamari Damacy (never released over here) We Love Katamari is all about rolling. Using both dual-shock thumbsticks, you control a small being – the Prince – as he pushes a ball – the katamari – around the various levels. If the katamari hits something smaller or lighter than it, it picks it up, the object sticking to the katamari (with its legs waving frantically if it happens to be animate). If it hits something bigger or heavier, it either stops or rolls over it. Picking more things up makes the katamari grow bigger, which means it can then pick up bigger things and roll over larger barriers. That’s basically it. As gaming ideas go, it’s probably the simplest since Super Monkey Ball appeared. 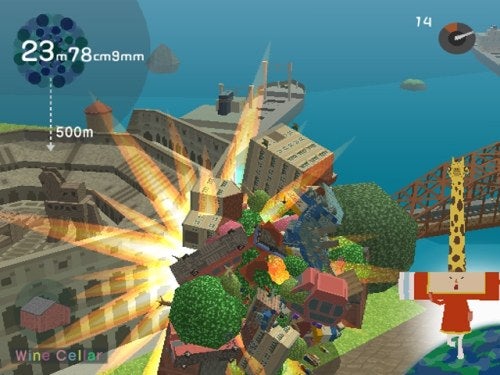 Of course, it’s not quite as simple as that. The prince is working at the behest of his father, the splendidly-chinned King of all Cosmos, who, infatuated with the fame he achieved during the first Katamari Damacy (though not over here) is now unable to resist the wishes of his ardent fans. As a result, you spend much of your time visiting the different areas of an oddly flat, storybook Earth, meeting fans, and trying to complete their strange requests. 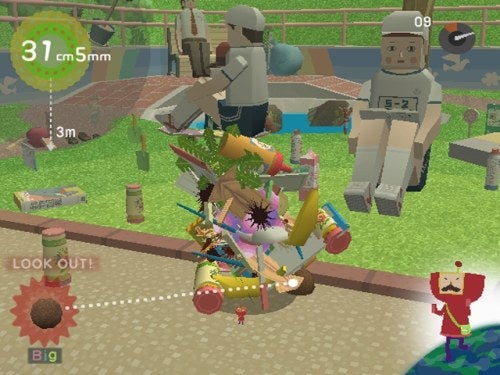 If this sounds weird, rest assured that it is weird. The graphics are excessively bright, determinedly polygonal and utterly, cheerfully charming. The music is a bizarre concoction of Vegas showtunes and Japanese pop, belted out by what sounds like Tony Christie fronting The Avalanches. If you’re a gloomy sort with a predilection for doomy industrial metal and a hatred of all things bright and breezy, you’re either going to have an allergic reaction to We Love Katamari, or you’re going to have to make damn sure that nobody catches you playing it. Being seen grinning stupidly at the chorus lines of dancing pandas and high-kicking robots in the intro movie could destroy your image in one foul stroke.


Now, the levels and the game start small, with children’s bedrooms, houses, playgrounds, gardens and – memorably – the bottom of a pond. But as the katamari grows, so does the scale of the game. Before long, it’s out on the town with your katamari, a roll in the snow with your katamari, a trip to the zoo, and so on. For the most part, your job is to make a katamari so big within such a time limit from the stuff you had available. Each environment is packed with animate and inanimate objects to pick up, but each also has its share of obstacles, from walls blocking your way to grumpy schoolboys who kick you out the way. Luckily, growth will help you overcome these annoyances. Once your katamari gets big enough, you can just roll them up like anything else. 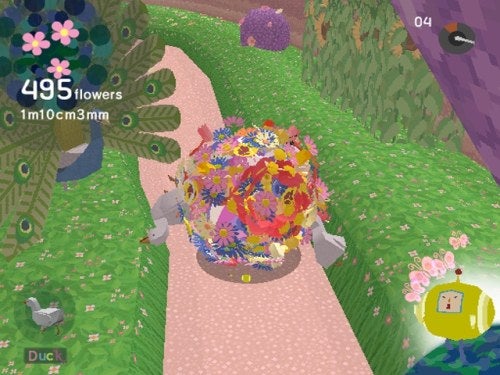 The skill of playing We Love Katamari is in a) controlling the katamari and b) working out how to build it up quickly. The first is easy because this is one of the few games where the Dual Shock’s twin-stick layout actually makes perfect sense. Once you learn how the sticks interact, you can manoeuvre and make rapid changes in direction with a fluidity and grace that at first seems impossible. And while this isn’t a game we can talk of in terms of realism, the physics involved are brilliantly handled, with a real sense of weight and balance to your katamari’s handling.

Best of all, once you’ve mastered the basics, the game throws in just enough twists to keep things interesting without ruining the simple appeal. One hilarious level involves rolling a sumo wrestler over food until he’s fat enough to bounce his rival out of the ring. Another faintly ridiculous effort is all about rolling up the largest cow or bear possible, without hitting a smaller cow or bear beforehand and spoiling your efforts. I won’t say more because I don’t want to spoil it, but when most games have hit their imaginative limits after the first three hours, We Love Katamari finds new ways to make you smile right up until it hits its climax.

Not that it seems to have a climax as such. Yes, there is a kind of story tying the whole thing together, and yes, the game gets bigger and you find yourself rolling up cities, famous monuments and dinosaurs, but even then there’s still a sense that there’s work to do. After all, completing a level isn’t the same as perfecting it, and there’s a temptation to give each one at least one more try. And, to be honest, it’s all so much fun that you just won’t want it to end. The fans are still beckoning you on the storybook surface of the Earth. Did you really give that messy bedroom all you’ve got? Why not give the Sumo level one more try? Why not get a friend around and try to beat the stages cooperatively, working together to push the katamari on its way? Or why not challenge that friend to a one-on one katamari battle? Aren’t you the katamari king? 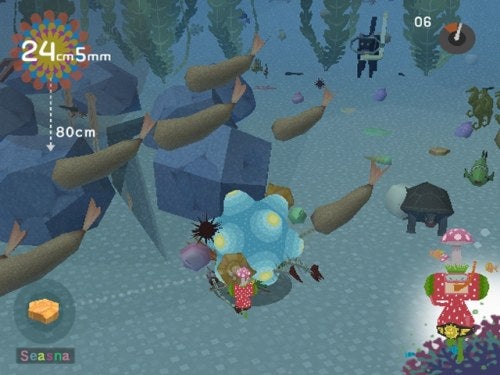 Why not indeed? In the end, I can’t really explain why We Love Katamari is so very, very lovable. I can talk about its gentle self-mocking humour, its superb design, its silly gifts and customisation options, or its oddly touching, warm-hearted feel, but you really have to play it yourself to get the gist. So do so. Leave all those tough, hardcore, competitive games behind. Sit back, relax, and let the good times roll.


Astonishing, original, and beautifully designed, We Love Katamari is a game that anyone of any age can sit down and enjoy. Happiness disguised as a PS2 game.