Few sectors are more competitive (or more hostile) than the telecoms industry and it seems remarkable the Three HSPA MiFi has been without direct major competition for eight months. Thankfully Vodafone has now stepped forward with its own HSPA ‘Mobile WiFi’ to bring some much needed rivalry… 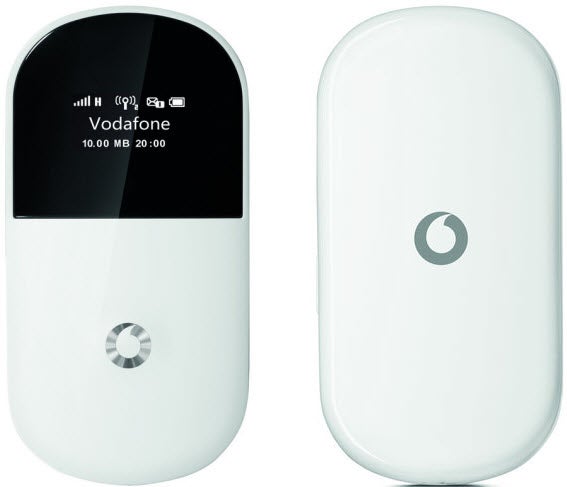 The Vodafone Mobile WiFi R205 comes from familiar stock. Like Three’s HSPA MiFi it is built by Chinese networking giant Huawei and is based on the E586 design. From the outside the R205 therefore follows the familiar river-smoothed-pebble design of MiFi (though it uses a different case) and is packed with MiFi battling specifications. These include HSPA/3G compatible theoretical download and upload speeds of up to 21Mbit and 5.76Mbit respectively and 802.11bgn WiFi. In addition at 95.5 x 50 x 14.1mm and 80g it is almost exactly the same size as the MiFi, but 10g lighter.

Take a closer look at the R205 and there are additional similarities. Like the MiFi the R205 uses an OLED display and its onscreen information is easy to read and identically laid out. From top left to bottom right this is: signal strength, connection type, number of connected devices (up to five), new messages and battery life while along the bottom is total data usage, time of the current connection and roaming state (‘R’ shows if enabled).

To bring up the display you tap the power button on the R205’s right side. To switch the R205 on or off hold down this button for up to five seconds, a useful feature which stops it accidentally reacting to bumps in a pocket or bag. Meanwhile on the left side there is a 32GB compatible microSD slot which turns the R205 into a memory key when plugged into a PC via the microUSB port on the bottom, which also doubles as the charge point.

One significant omission appears to be that of the MiFi’s dedicated security button, which brought up the SSID and wireless key. In actual fact double press the power key and this information comes up. The problem is this isn’t very intuitive and we can see many customers not realising this for the life time of their devices. This lack of clear labelling is irksome, but forgiveable if performance and pricing whet the appetite.

From the off we have to say testing mobile Wi-Fi is far from a science, even when its nearest rival uses the same core chipset. Coverage strength varies wildly from place to place, network to network and even time of day while a single heavy downloader nearby can skew results completely. Furthermore without undertaking a nationwide tour we can only test in a limited number of areas. As such we would recommend you take the time to check the network reception in the places you are most frequently and along your most travelled routes. Saying all that, the results we received do make for interesting reading…

At its best we found the Vodafone Mobile Wi-Fi R205 produced download figures up to 9.1Mbit (1Mbit faster than the peak speed we attained with the MiFi), though in general speeds in areas of good reception ranged between 3Mbit and 4Mbit, less than the 5Mbit average we got with Three. The other significant point was signal strength with our unlocked iPhone 4S seemingly matching the R205 step for step and sometimes achieving signal in areas of weak reception where it could not. This came in direct contrast to the MiFi which consistently attained stronger signal than the 4S and often found a 3G signal and HSPA when the handset could not. This is strange given the shared chipset, so we can only speculate that different casing could be a factor, or more likely that signal on the two networks differs where we tested. Needless to say the results you achieve could also vary. 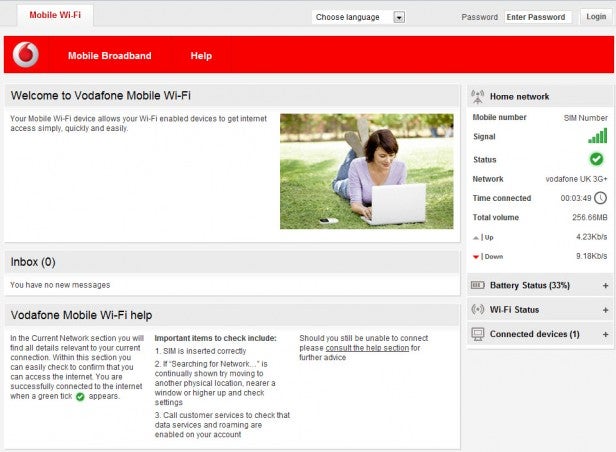 More tangible was the battery life, with the Mobile Wi-Fi R205 matching Vodafone’s marketing and lasting up to four hours, a figure which could be brought down to a little over three hours 30 minutes with heavy usage. Again this falls short of the MiFi which claims up to six hours battery life and even with heavy usage we were able to make it last almost five hours. Also disappointing was the R205’s lack of charging cradle, something that makes Three’s MiFi easier to charge (and to remember to charge) between trips.

Where we were pleased with the R205 is its browser-based setup screen which is more intuitive and user friendly than the MiFi, though more technical users may find it takes more steps to change settings like the SSID, WiFi key, etc. In addition Vodafone offers a dedicated R205 app for Android and iOS which displays the information from the mobile WiFi’s screen in a more digestible manner and lets you leave the R205 out of sight. We’d like to see this as standard on all such devices. 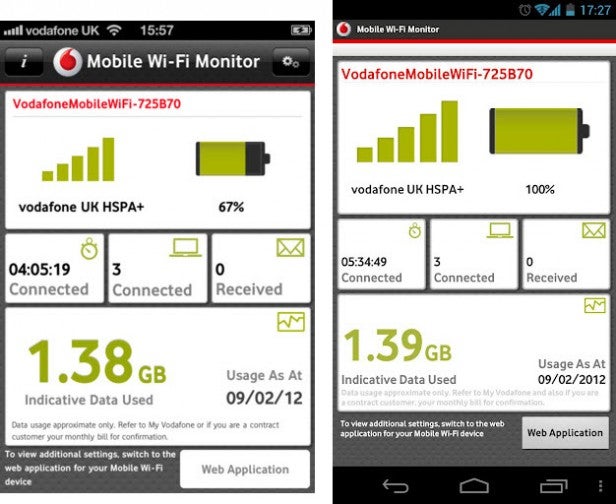 Sadly this pleasant surprise is followed by an equally unpleasant one. Vodafone has a strong reputation as a premium network, but it has priced the R205 out of reach for anyone other than those living in areas with poor Three reception. For £15pm on an 18 month contract Vodafone offers R205 customers just 2GB of data per month while a 30 day rolling contract also provides 2GB for £20 per month. By comparison Three provides 5GB of data per month for £18.99 over 18 months or 5GB of data per month for £15.99pm and £49.99 up front on its rolling monthly contract. Even on Pay As You Go the R205 has no advantage. On pre-pay it costs £75 and comes with 500MB of data while the Three MiFi costs £85, but comes with 3GB of data.

All of which means, despite giving the Three MiFi a new rival, we can’t honestly say the Vodafone R205 provides genuine competition…

”’Verdict”’
Vodafone’s long awaited HSPA mobile WiFi is sadly something of a letdown. It gets most of the ingredients right with an informative screen, microSD card support, an intuitive browser-based setup screen and dedicated Android and iOS apps but pricing is very high. In addition we found no consistent performance benefit to justify these costs over Three’s network. This was compounded by weak battery life and the lack of a bundled charge cradle. Over to you Orange, T-Mobile and O2…