The Vodafone Emporia RL1 is a mobile phone that looks and feels like a home phone. Whether you want to ditch your home phone line without losing that home phone feel, or are looking for an easy-to-use mobile for an elderly relative, this could be what you’re after.

The Vodafone Emporia RL1 is not like most phones. It has the utilitarian design of a home phone but is actually a mobile. To anyone who has shopped around for a SIM-only offer recently, the benefits of this are obvious. A home phone line costs upwards of a tenner a month, but a similarly-priced, SIM-only contract could get you all the minutes you need, as well as letting you make calls on-the-move. 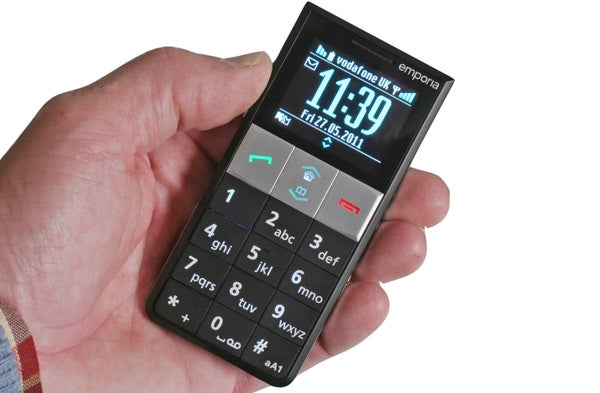 This phone comes with a design bonus too – its large buttons and ultra-clear screen make it suitable for use by the elderly. Or those with minor physical ailments who can’t deal with the tiny buttons and busy screens of today’s smartphones. As such, it’s gunning for a similar audience as the Doro Phone Easy 409s.

Its front buttons are huge and square, taking up as much space as possible. This not only gives your thumbs plenty of space to work in, it also lets the on-button text use a much larger font than other phones. Using a high-contrast white-on-black colour scheme, the numbers and letters on each key couldn’t get much clearer.

The buttons require a proper prod, which may not be perfect for those with severe arthritis, but there’s no mistaking the firm click with which each press is met. You won’t confuse whether you’ve pressed a button or not here.

Above the black keypad and silver soft keys is a 1.8in screen. It uses a colour display, and although very low-resolution the quality is excellent. It’s an OLED panel, offering perfect angled viewing, excellent clarity and near-unbeatable contrast.

To further increase the visibility of what’s on-screen, the Vodafone Emporia RL1 lets you change the font size used throughout the phone’s menus and in SMS texting. Even the most petite Small font size is larger-than-average, where the largest Jumbo option is downright huge.

While it makes each letter easy to see, Jumbo leaves each menu option cut off at the edge of the screen, forcing you to wait for the painfully slow scroll to kick in to read the rest of the entry. Unless you have significantly compromised vision, the Large setting is a much better compromise. You can set the menu and SMS font sizes independently though – Jumbo still works a treat with text messaging.

The buttons on the sides of the phone are just as oversized as the menu fonts and front buttons. They deal with volume control, on/off, lock and the torch – an LED light that sits on the top of the handset. One downside about the OLED screen is that, as it doesn’t use a backlight, it’s not as effective a light source as LCD, so the torch comes in mighty handy for finding keys in the dark. It can even be used when the phone’s turned off. Like so – 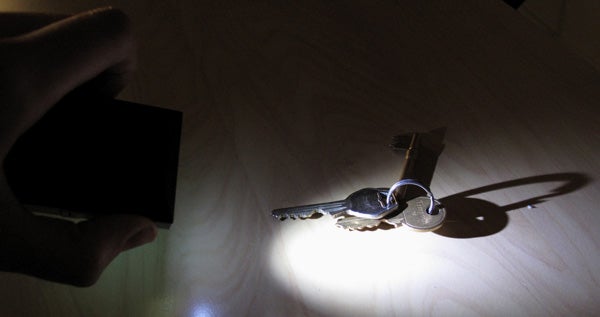 To go with its ultra-square buttons, the Emporia RL1 has a thoroughly square-jawed design. However, the bottom edges of the phone are slightly rounded, to make the phone comfortable to hold. There’s also some contouring on the back to further increase comfort. These measures work too. It may not look like the friendliest, most curvaceous device on the block but it’s perfectly comfortable to hold. 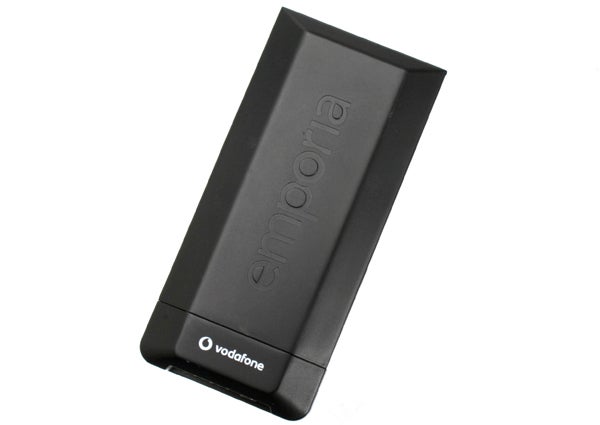 A key home phone-like feature of the RL1 is its dock. This plugs into the charger, recharging the phone when it’s perched on-top. On the dock there’s just a single button that lights-up the display – useful if you want to use the phone as an on-desk clock. 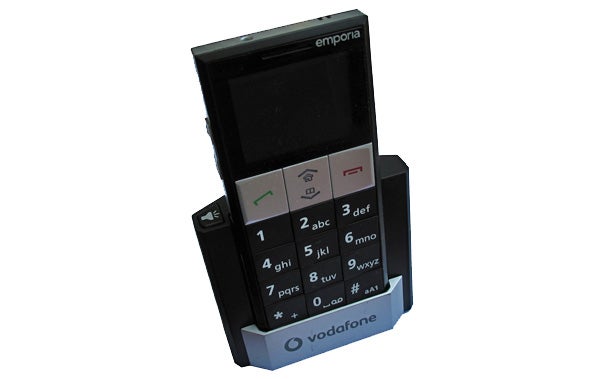 The dock operates in two ways. You can hang it up on the wall, using the fittings on its back, or slot in the bottom “foot”, which lets it stand up by itself. It’s not a high-end affair, made of light plastic and equipped with a few friction-increasing rubber feet but no extra stabilising weight to stop it sliding all over the place. As part of a £60 pre-pay bundle though, it’s a welcome accessory. 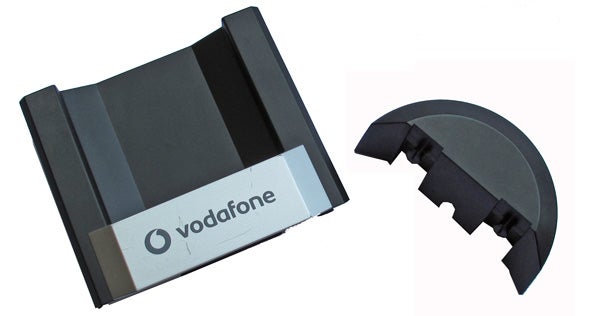 The Emporia RL1’s interface is self-consciously lo-fi. Like the handset design, it reminds of a digital home phone rather than a mobile. To simply make calls you need never enter the main menu, but it remains a core part of the phone. Each headline feature, such as the phone book and SMS function takes up a whole page to ensure there’s not too much info on-screen at once.

Delve into Settings and the ease of use starts to fall down a bit. It’s displayed as a great long list of 30 options. We understand what Emporia is doing here – collapsing the standard sub-menu structure so that you can’t really get lost, just fed up of scrolling up and down – but it offers a different kind of frustration rather than eliminating it. However, for its target audience it’s a better idea than using a standard labyrinth-like menu structure (as intuitive as us techheads may find such things).

What does the Settings menu contain, when the phone is so basic? There are volume controls, display settings, text size and other such basic bits. However, there are a few gems that might be overlooked, such as the Auto Withhold Number option and the Birthday Reminder. These are the Emporia RL1’s take on advanced features, and as far as we’re concerned, they’re pretty well-judged.

As you must have guessed by now, you won’t be web surfing, watching videos or listening to your lossless FLAC music collection (or MP3s for that matter) with this phone. Memory limits here are measured in number of phone book contacts it can hold rather than megabytes. A hundred, if you’re curious.

Unlike the majority of phones we review, the Emporia RL1 is actually about making calls, not playing about with apps, taking photos or surfing the web. So call quality is of paramount importance.

Mercifully, the Emporia RL1 is a skilled call-maker. Using the standard earpiece, calls are loud and clear – more so than budget smartphones at the same price. A hands-free speaker is built-in too. It’s not as loud as that of a decent home phone set, but it will do the trick for use at home. And, as far as we know, the older Emporia clientèle don’t tend to list Formula One car driving among their hobbies so this should suffice. 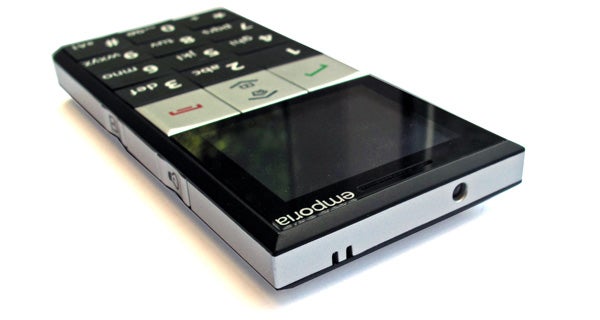 Battery life also smashes smartphone stamina to bits in real-world use. The 180-minute talk time isn’t going to impress anyone, but the RL1 will last around a week between charges. Use the charger as intended – as the phone’s home – and you’ll never have to watch its display blink out to black, ever.

The OLED display works in its favour too, as the black parts of the screen don’t draw any power. Most of the display is black, all the time. The battery is easily user-replaceable, hidden as it is under the back cover. 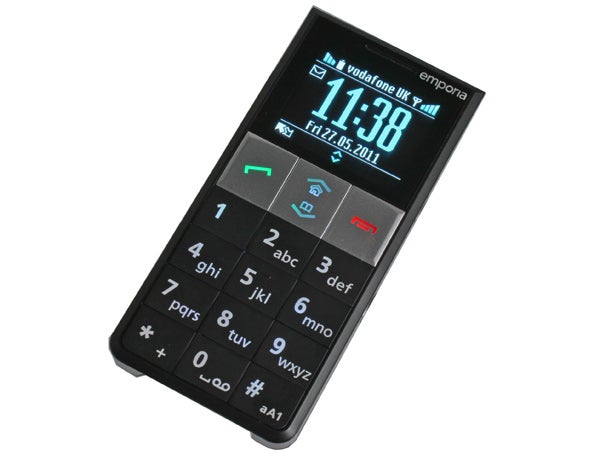 The Emporia RL1 isn’t all that clever or cutting-edge, but it’s loaded with design choices that are sensible considering the device’s niche audience. Mainstream networks are cottoning onto the idea that these kinds of devices do have a place in the market too. Tesco stocks the Doro Phone Easy 409s and now Vodafone offers the Emporia RL1. Which is better? They’re both available for £60 on a pre-pay deal (no coincidence there, folks) and both are well-made, well-tailored handsets.

The question is whether you want a simple mobile phone or a mobile phone that apes a home phone. For real mobile phone deniers, the Emporia is likely to appeal more.

The Emporia RL1 doesn’t have masses of features, but it does what it sets out to do remarkably well. It’ll let you or an elderly relative replace a DECT (house) phone with a mobile, without dramatically altering the user experience.

This is all down to the simplicity of the interface, the home phone-style charging dock and the pragmatic handset design. Ultra-budget handsets are available for less, but for elderly or technophobic users, this phone offers some serious usability advantages.