Viva Pinata: Trouble in Paradise is one of those sequels that, at first, seems to blur the line between follow-up and reworking. Those of us who played Rare’s original will be delighted to find the familiar style and gameplay basically untampered with, but you still can’t help thinking that, back in the good old days of PC gaming, this would have been an expansion pack. This impression diminishes the more you play and get to grips with the new features, but this isn’t some bold, bottom-up redevelopment; more an effort to squeeze the potential out of Viva Pinata and transform it from a much-loved niche title into a must-have 360 classic. 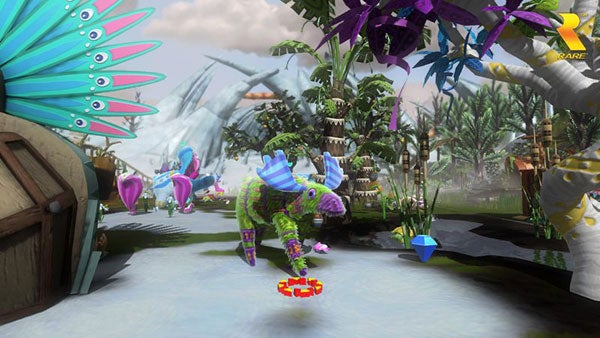 After all, the biggest problem with Viva Pinata was that not enough of us played it in the first place, and that those who did didn’t always get the point. Microsoft tried to position it as a game that could lure the more casual, family gaming audience over to a console best known for hardcore shooters, but this undersold the game to one audience while overselling it to another. Beneath its cutesy looks, Viva Pinata was actually a fairly complex game of garden building and creature management. Families expected a sort of cross between Pokemon and Harvest Moon then found themselves playing something a lot more challenging. The trick Trouble in Paradise is going for, then, is to make a more accessible Viva Pinata while adding content for the folks who enjoyed the mind-boggling, multi-tasking play of the original. It just about pulls this off. 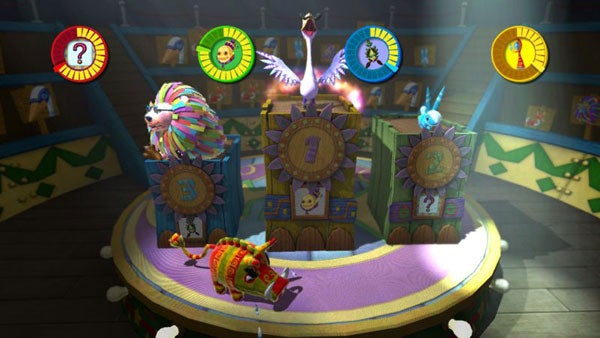 For a start, it’s structured much better this time around. In Viva Pinata you were shown the basics then just expected to get on with it, leaving a lot of players feeling mildly patronised then completely abandoned. Trouble in Paradise does things differently, throwing in a new set of tutorial missions introduced by a new face, Langston (apparently a Lickatoad well known to fans of the Viva Pinata cartoon) which then lead onto a series of worldwide challenge missions. The idea is that the tutorials take you through the basic tools and concepts of the game, then the challenge missions gently get you into the business of attracting, keeping and breeding pinata in a vaguely sensible order. Langston’s missions aren’t imposed on you, and if you’re perfectly happy with the more freeform structure of the original, you’re welcome to ignore them. If, however, you’d rather work with targets and objectives then helping Langston out will keep your garden moving in the right direction.

In general, things just flow much better this time around. You now start with some structures and pinata to work with, the game seems more generous early on with seeds, shops and facilities, and the weeds and sour pinata that come along to make your hard work harder don’t appear until a little later in the game. As a result, you have time to get used to the rhythm of planting, watering, digging, building and pinata wrangling before things get hairy. In other words, there’s less to get in the way of you getting hooked right in.

And if you (or your kids) find even this more gentle learning curve too tricky, the game has other ways around it. First, there’s a ‘Just for Fun’ mode with all the nasty bits removed and an inexhaustible supply of cash with which to try out the game’s critters, buildings and objects. Secondly, Trouble in Paradise allows another player to step in and help out. The second player’s view is constrained by the position of the first player’s cursor, but they can help handle most of the general gardening and pinata-handling tasks. Being helpful in this way fills a gauge, and when this is full the second player can then pull off a special magic power, such as healing a sick pinata or filling a pinata’s candiosity or happiness meter. It’s a great way for experienced Viva Pinata players to help those who are still finding their welly-booted feet. 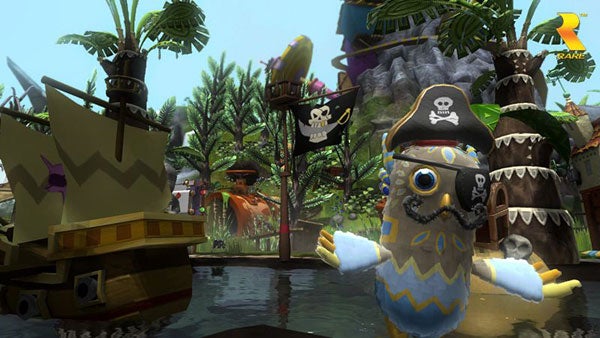 Those experienced players also gain a few new features of their own. Obviously there are over thirty new pinata to deal with, each with their own needs, demands and difficulties – particularly where getting on (or staying alive) with other pinata is concerned. The biggie, however, is the introduction of the new desert and arctic areas, each of which plays host to some special pinata that have evolved for that particular climate. Truth be told, you won’t spend an awful lot of time in these, as they’re really just areas where you can trap the new pinata before sending them back to your central garden; there are no options to alter the new environments themselves. All the same, baiting and trapping adds a new layer to the game, not least because getting the right creature into your trap while fending off any unwanted pinata or sour pinata can be a task in itself.

A less immediately important new feature is the trick stick. The basic idea is that you entice pinatas through various means to perform tricks. Then, by tapping them with the trick stick, you can get them to do the same trick at your command. Again this might not seem all that useful, but it is possible (though awkward) to use the trick stick to chain together fairly complex performances involving several different pinata. You can capture the results as a photo, but it’s the sort of thing that screams out for a Halo 3 style video capture system. 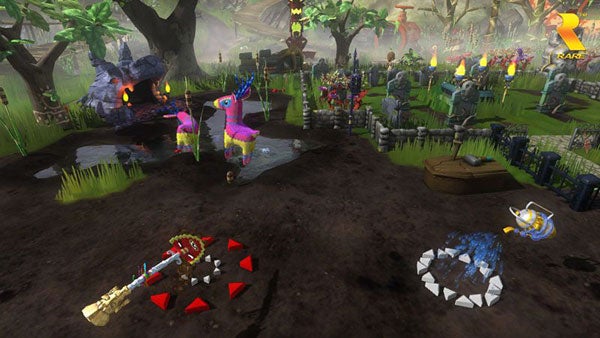 Otherwise, this is very much the experience it was before. Visual enhancements are slight, though it’s worth bearing in mind that – in its own way – Viva Pinata was already one of the most gorgeous games on the 360, representing the logical next step in the evolution of Rare’s distinctive cartoon style from the N64 and the work it did with Kameo at the 360’s launch. The unique paper-rendered style of the pinata is carried across beautifully to the new critters, and the overall look approaches CGI movie quality a lot of the time. Sure, there are occasions when the frame rate stutters or a reflection pops in, but not to the extent that anyone has a real right to complain. 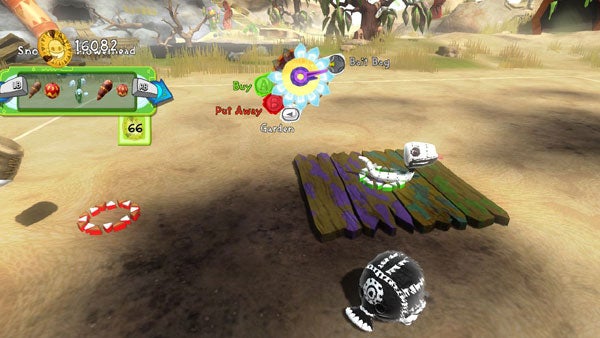 What seasoned Pinata players will notice more is that Rare has made several small changes to the interface that make it faster to shift between pinata or find the right tools, and generally worked in a smoother difficulty curve. Just like Pokemon, there’s something horribly addictive about finding out what each new pinata needs, first to settle, then to breed, and the appearance of a new pinata on the garden’s periphery is always cause for excitement. As soon as you see the cut scene, you just know you’ve got to have it. There will come a time when you’ll need to hire assistants to take some of the menial work off your shoulders – Arfur’s Inn again provides the perfect recruiting spot – and there will be times when the bickering and infighting between pinata gets you down. You can do so much with garden scenery of fencing, but in the end some pinata just don’t get on.

Later on, continual assaults from sour pinatas and the murderous characters known as pesters will also cause you headaches, and – for all the improvements – there are still moments where you simply won’t be able to work out what you need to do to solve a certain problem. Generally speaking, however, this is a slightly kinder, gentler, Viva Pinata and all the better for that. And with more toys, more accessories and more garden items than ever before – many themed – it will take you a long, long time before you’ve exhausted it. 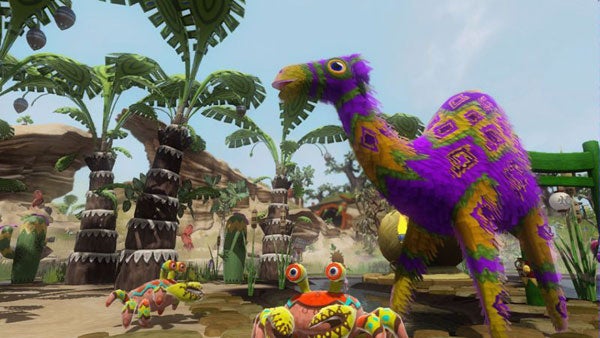 Finally, Live integration is much better this time around. Up to four of you can contribute to a garden at once, with the host controlling which players are allowed to modify the garden and which are only allowed a ‘hands off’ visit. This can turn online gardening into a bit of a show-and-share experience, as many gardeners are understandably too precious about their efforts to let anyone else have a go, but I could imagine that – were you to find three like-minded, Pinata-loving souls – the collaboration could be quite entertaining. For more competitive types, there are also options to race pinata or put them in beauty contests – and you can do this offline as well if you want a break from the gardening norm. Rare even has one more neat trick up its sleeve. The game comes with a card that, when you put it up to the Xbox Live Vision camera, releases a special bonus item or pinata into the game. You can even use this facility to create and trade custom pinatas with friends (though finding one with a Live Vision camera may be difficult). 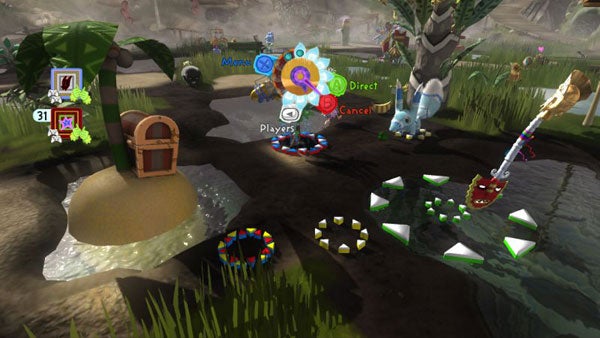 All in all, there’s still a feeling that the odd control issue and the overall level of complexity in the main game mode has left Rare a hair’s breadth from having a classic on its hands, but Trouble in Paradise has certainly got both a broader and a deeper appeal than the original. That it’s managed this without spoiling what is still one of the most original and distinctive premises on any modern console format is something to celebrate. Trouble in Paradise might still not convert those allergic to bright colours and cutesy critters, but anyone with more sense will know that this rivals Spore as the great alternative strategy game of the year so far. Frankly, you really don’t want to miss out.


Viva Pinata was always a complex strategy game in cutesy guise. Now Trouble in Paradise has softened its edges and made it a more enjoyable game for anyone and everyone to play.