There’s an understandable train of thought harboured by those in the know that, despite all of its conveniences, DAB radio simply isn’t very good, and if anything is actually a step backwards from FM. The reason for these heinous thoughts is two-fold. Firstly, there’s the simple fact that DAB is often transmitted at low bit-rates so sound quality is no better or in some cases inferior to its analogue forbear. Secondly, reception still seems to be a bit of a problem and unlike FM or even AM, where a poor signal will simply result in a crackly or muffled listening experience that deteriorates linearly as the signal drops off, when a DAB signal breaks up you get either no sound or a horrible digital noise that renders the programme unlistenable. All of which may make you wonder why you’d ever consider spending £160 on a DAB radio.


Well, just as we saw with the B&W Zeppellin, which demonstrated how the iPod’s inferior sound quality (when compared to other mp3 players) could still result in a thoroughly pleasant listen, the Vita Audio R1 shows that DAB really can sound brilliant. 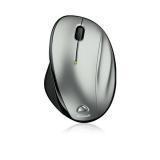 The R1 isn’t just about DAB, though, and if you do prefer to listen to FM, or even your mp3 player, the R1 can do this also. It doesn’t have some of the fancier features like recording and rewinding of radio programs, seen on such devices as the Pure Evoke-3 and nor does it have that essential characteristic of a truly portable radio, namely battery power. However, it does possess all the basics required of a small tabletop DAB radio, like sleep and alarm functions, making it the perfect bedside radio for the audiophile.


Made by the same fair hands that brought us the Ruark range of loud speakers, Vita Audio’s products have a truly enviable heritage when it comes to sound quality so we have high hopes in this department. However, the other skill that high-quality speaker makers almost always seem to possess is an eye for design and Vita Audio is no exception. The R1 is a thoroughly attractive little beasty and one that I and all the TR staff would be more than happy to have adorning our bedside cabinets, kitchen worktops, or conservatory windowsills.


The rounded sides, pressed steel front and back panels, and chunky controls combine to create a pleasingly simple, retro look that would suit any home style, old or new. What’s more, if you don’t like the wood veneer finishes there’s a choice of high-gloss (vita) red and (dream) white lacquers as well. A dark grey finish used to exist too, and you may still be able to find these in the shops, but they’re no longer produced.

Taking a closer look at the front, we see a grill covering the R1’s single driver, which uses a bottom exiting bass port to enhance the low end response. Below this are two 3.5mm jack sockets for headphone output and auxiliary input, both of which we’re happy in principle to see. However, we’re not sure having them on the front is strictly necessary. We can appreciate why you’d want the headphones on the front – easy to find and reach – and including the line-in on there as well keeps things symmetrical, but once you’ve plugged in your PMP or headphones the wires trailing from the front just destroys the aesthetic. It’s not a big gripe but it’s worth bearing in mind. 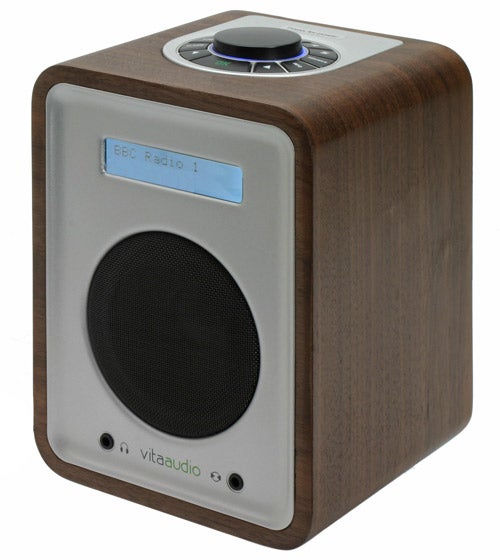 The front-mounted LCD screen uses black writing on a white background to create a mutual display that matches the rest of the R1’s styling, no matter what finish you choose. When viewed straight-on the screen is easy to read with crisp lettering and decent contrast – it’s particularly good at night – but when viewed from any sort of angle the display rapidly becomes unreadable. This may not sound like a big problem but if you plan to use the radio as your primary alarm, reading the time from the comfort of your bed could well be frustratingly impossible if the radio is positioned at certain angles. Likewise, if you hear a track you like the sound of and want to see its title and artist (this is probably the most useful feature of DAB) you may find yourself needing to close your book, put down your cup of tea, get up out of the armchair, and peer straight at the screen to find out – I know, it’s a hard life!


While on the subject, the information features of the R1 are not as sophisticated as some other rivals. You can’t scroll manually through station information – it scroll across at its own pace – and there’s no support for any Electronic Program Guide (EPG) for quickly viewing upcoming programs. Of course, with the small screen it would be near impossible to read any sort of guide but then that just highlights the problems with the R1’s screen even more. 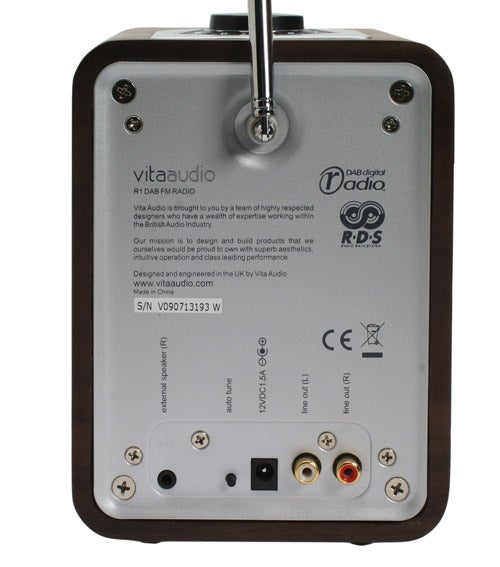 Round the back we see everything we’d expect on a small DAB radio. There’s an output for an extra speaker (Vita did develop matching speakers but they never actually reached production so this connection isn’t of much use), an auto tune button, and two phono outputs for left and right line-out. Every time you power down the radio, by turning the plug off or unplugging the device, and turn it back on again the auto tune facility kicks in, rapidly finding any available DAB stations. However, if you insist on keeping your radio on at all times one touch of the auto tune button will quickly rescan for you.

One of the Vita Audio range’s signature features is the circular control array that sits atop all the devices. Officially called, the RotoDial, it sounds like some sort of ingenious new control method involving scrolling menu options or such like. However, it’s actually more about aesthetics than anything else. Rotating the dial simply controls volume and pressing the dial brings the radio in and out of standby. It’s thus down to the ring of buttons around the dial to control all the other functions. 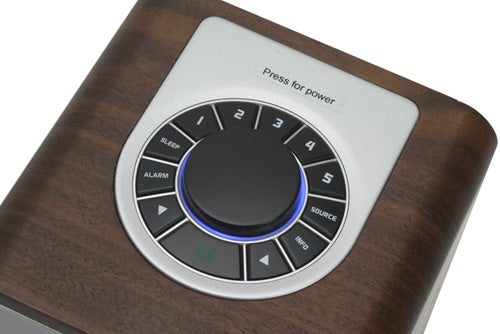 There are four main function buttons for controlling alarms, sleep modes, input source, and DAB text information. A short tap of the Sleep or Alarm buttons will show the current settings and holding down the button enables you to edit the setting. Once in a menu, the arrow and OK buttons are then used to select options and adjust settings. It’s a simple system that’s easy to pick up and works well.


The Info and Source buttons work slightly differently. Pressing Info will cycle through a number of display options including programme information (or Dynamic Link Segment, as it’s known), date and time, programme type, data rate and mode, and signal strength. Likewise, pressing the Source button will move through the DAB, FM, and Aux input options one by one.


The remaining five buttons control the tuning presets, which can store five DAB and five FM stations. To store a station, simply navigate to the station you want then press and hold the preset button for a few moments until a message appears stating that it’s been stored. To navigate back to the preset all that’s required is a tap of the assigned preset button. The process is easy and intuitive and switching between stations is super snappy.


So, from a functionality point of view the R1 is on a par with most other single speaker desktop DAB radios. The difference is most radios cost between £50 and £100 whereas the R1 costs considerably more. So, the big question is whether the improvement in audio fidelity and quality is worth the extra outlay and I’m happy to report that indeed it is. It’s quite superb in fact. 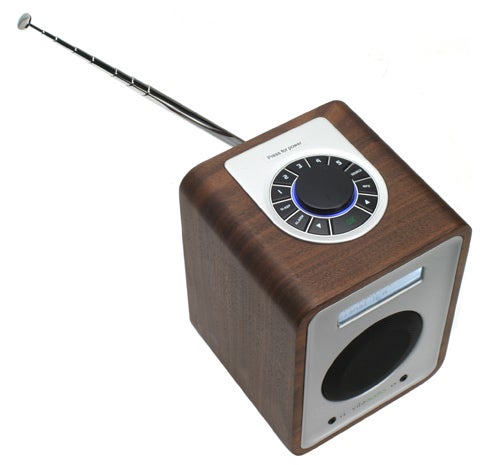 The bass is beyond anything you could reasonably expect from such a small system and the overall sound is wonderfully warm. Yes there is a little loss of fidelity with the most complicated of music as the single driver struggles to maintain complete clarity in the top end while still delivering driving basslines, especially as you crank the volume. However, to expect better would be asking for miracles.


The debut performance of Portishead’s new track, ”Machine Gun”, on Radio 1 fortuitously coincided with my testing and it proved a superb test track combining as it does, the eponymous rapid fire bass lines and soulful haunting vocals of Beth Gibbons in one heady mix. Thankfully, the R1 ensured my first listen of this thoroughly intriguing track was as good as I could have hoped for, particularly as the neighbours might have complained had I dared to play it any louder.


The warm tone lends itself equally well to voice as the sultry tones of Terry Wogan’s early morning Radio 3 show proved. Of course, a single speaker setup is never going to give you the spacial effect that convinces you that the person speaking could be in the same room as you (as a good Hi-Fi might) but then who’d really want to wake up thinking Chris Moyles was in their bedroom!


The R1 sells itself as the best sounding tabletop DAB radio on the market and in our opinion Vita Audio has every right to make such claims as we’ve yet to hear one that’s better. It does have a few little ergonomic issues that we wouldn’t expect to see on such a high end product but when all is said and done these wouldn’t put us off buying one and neither should they for you.