On the face of it, Virgin Media Powered by TiVo (or TiVo as we’ll be calling it from now on) is just another set-top box giving you access to a host of channels, HD content, some 3D content and on-demand services. It is only when you begin to play with it however that you realise just how much more powerful it may be. It claims to be innovative and intuitive and will know you better than you know yourself – only after it gets to know you a little though.


What sets this box apart from its rivals, such as the 1TB Sky HD box, is that TiVo will predict what you like to watch, based on your viewing patterns and record the shows you may want to watch, without you having to lift a finger. It claims to revolutionise the way we consume TV, not constricting us to the TV schedules any more, but allowing us to watch what we want, when we want. Read on to see if TiVo really can change our lives. 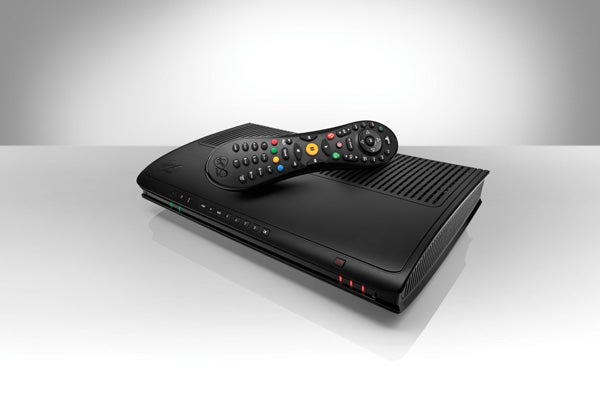 First up, lets have a look at the hardware. The TiVo box on an aesthetic level is quite an improvement over the V box, which frankly looks like a remnant from a 1980s Eastern Bloc country. The curved lines of the TiVo box mean it will sit nicely in any modern sitting room set-up. You could easily imagine the red light from Knight Rider’s KIT flashing across the front before the intelligent box starts to talk to you. On the front, it does away with any LCD channel display, opting instead for two green and three red buttons to indicate power, remote and the number of tuners in operation. For some this will be a flaw in the design, but for most people it won’t impact too heavily.

Also on the front are eight buttons you hope you never have to use, but just in case you do lose your remote, the buttons will allow you to navigate the EPG while crouched below the TV. There is also a Power button and a Record button. Looking at the rear of the box, we find the usual assortment of connections including power, cable, optical audio, Scart, HDMI, 2x USB, Ethernet and the slot for your Virgin Media smart card. Inside, this box contains a 1TB hard drive (good for 500 hours of SD recording), three tuners and a dedicated 10Mbps modem which works totally independently of any Virgin Media broadband you may have in your house.

The peanut-shaped remote control is a big change from previous versions. Like the system as a whole, it took some getting used to, but after a few days using it, it became a lot more familiar, though selecting buttons was far from second nature. The numeric buttons are on the bottom of the remote with the play, pause, fast-forward and rewind buttons occupying the centre of the unit. The unique ‘Thumbs Up’ and ‘Thumbs Down’ buttons sit either side of the record button, above which sit a plethora of navigation buttons. 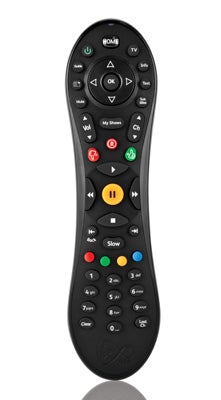 The Electronic Program Guide (EPG) for TiVo has been completely redesigned and those used to the old Virgin set up will initially find it strange to deal with. With a new remote and new system to navigate, it took quite a while for us to be able to use it instinctively and even a couple of weeks in, there are still times when it’s not altogether natural. The major change comes in the homepage, where you are greeted with a list of six options on the left hand side and a visual Discovery Bar across the top where program icons are dynamically displayed while you browse through the homepage. The Discovery Bar includes a combination of programs TiVo thinks you would like and programs promoted by Virgin. There is still all the stuff you would find on the V box menu including On-Demand content and My Shows and Recordings. 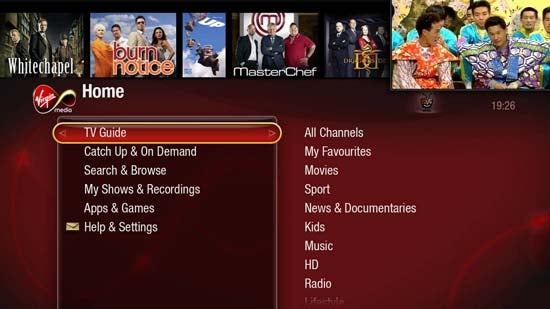 Overall the redesigned homepage and guides are a lot brighter than the previous versions and once you get used to the left and right selection method, they are intuitive to navigate your way around. First up is the TV Guide, which has been redesigned to include more information such as which programs are available via catch-up – indicated by a little ‘c’ symbol. Where things begin to get interesting is that the new EPG allows you to scroll forward and back, up to seven days. Any programs in the last seven days you see with the catch-up symbol can be clicked and two clicks later you are watching the show. This is a very slick system but we just wished the BBC on-demand content could be accessed this way too rather than via a dedicated app or the red button.


While watching TV, the program guide gives us a lot more information than previously, including a program description and what channels the other two tuners are tuned into. It is also possible from here to go directly to either of these channels and rewind to the point when it tuned into that channel. While watching a show you can press the green Thumbs Up or red Thumbs Down buttons to let the system know this is the type of program you like or dislike. It is these actions which help TiVo to predict what you like and make suggestions about shows it thinks you may enjoy. 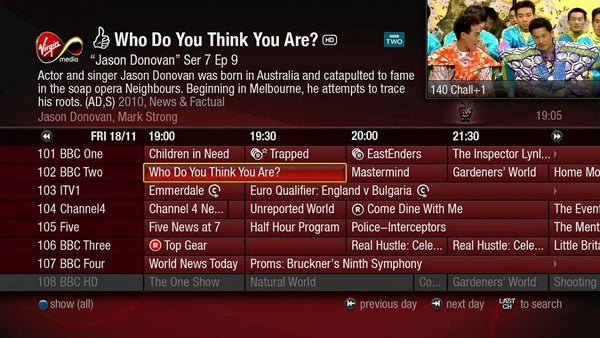 In the My Shows menu from the homepage (also accessed via a dedicated remote button), you will find all the recordings (organised into folders if there is more than two of one series) and Series Links you have scheduled, but you will also find a folder entitled Suggestions. It is in here that TiVo places the shows it thinks you would enjoy based on your viewing habits and Thumbs Up or Down selections. For the most part, TiVo gets it spot on, recording shows and films in the same genre as those we would normally watch anyway. While most of the programs are fairly obvious choices, there were a few we hadn’t seen/heard of before and this is where TiVo excels, by introducing you to content that otherwise would have completely passed you by.

Where the TiVo box significantly differs from any of the competition on offer, is in the Browse and Search options. From the homepage, choosing Browse and Search will let you find virtually any television show, film, actor, actress, director that is scheduled to appear in the coming weeks. It will allow you to check out when and where particular programs are on, record them and set up series links. The ‘Browse All TV’ option, brings you to curated groups of television shows and films including Pick of the Week, Collections and Categories. 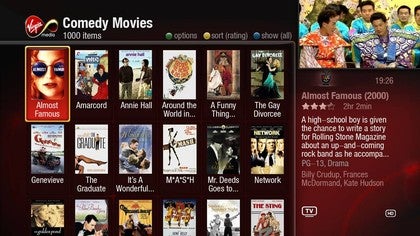 The My Wishlist Searches option is a very powerful tool and one of the best features on TiVo. Say for example you love Christopher Walken (and who doesn’t) and you don’t want to miss anything that he appears in. By setting up a Wishlist Search for Walken, your TiVo box will automatically keep an eye out for anything to do with the acting legend and record it for you. You can set up as many searches as you like based on actor, actress, director or just a keyword. The final option in this Browse section is access to YouTube. This means you can search the entire YouTube library whenever you want, using the dedicated 10Mbps modem in the TiVo box. The interface is simple and the system works effectively, though with most of the content on the video sharing site not the best quality, on a larger screen it can seem very blurry indeed. 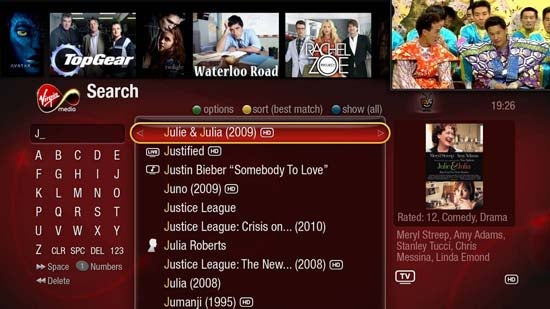 The final section on the homepage menu is Apps and Games. In its current form, this section is not a killer feature, but it is the possibilities that Virgin Media could open up which make it such an exciting feature. Currently there are just seven apps available: Twitter, BBC iPlayer, Who Wants to be a Millionaire, Celebrity, Weather, eBay and again YouTube. The iPlayer app has been developed specially for Virgin Media and contains up to three times the content available on the V boxes. Users can access it through this dedicated app or via the red button. The other apps are all fairly basic (the eBay app doesn’t even let you make a bid) but Virgin Media fully admits these are merely the beginning and it sees this as one of the areas where TiVo will stand out in the future.


The 1TB TiVo box is not cheap. Costing £199 for new customers and £149 for existing customers, the box gets a lifetime guarantee from Virgin Media should anything go wrong, but the catch is that you actually don’t own the box and effectively are renting it – which is a little odd. However this week Virgin Media has announced a new 500GB box which will cost £49.95 for existing customer. 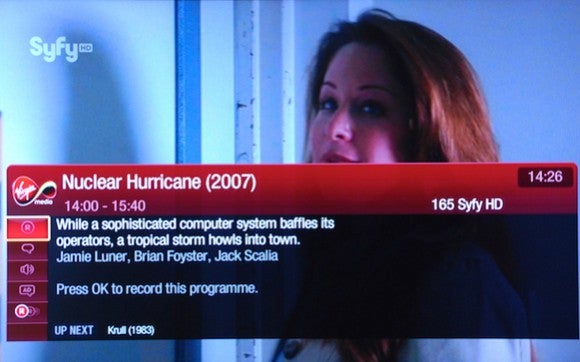 With 50,000 people pre-registering their interest in getting a TiVo box,
there certainly seems a demand for the service out there. The box
itself, while quicker than its predecessors, is still sluggish in places
and some of the menu screens look pixelated. Add to this the high
initial cost and bump of £3-a-month in the subscription and a lot of
people could be put off the service.


While there are certainly some drawbacks, Virgin Media freely admit that
this is just the beginning and the powerful box offers so much more
than any of its competitors do. Its unique learning brain will bring you
to television places you could only have dreamed of. It will introduce
you to shows you will love (and hate) and will help you view television
in the way you want to view it. The potential for growth is huge with
TiVo and if Virgin Media get it right then it will set the standard for
how we watch TV for a long time into the future.