Mobile broadband speeds are getting faster and faster, coverage is better and better, and prices continue to fall so there’s never been a better time to make that laptop of yours truly mobile. The latest addition to the myriad options available is this new USB modem available from Virgin Media, which the company claims can reach download speeds of 7.2Mbps. Let’s see how it fares. 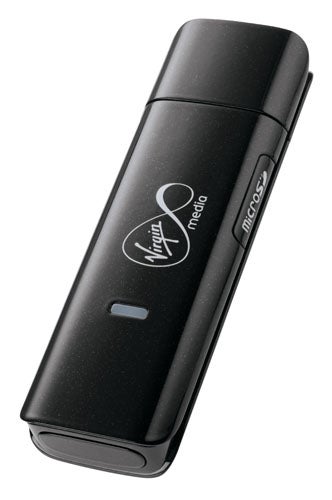 There’s no two ways about it, a USB dongle just isn’t the most exciting thing to behold but for what it’s worth, Virgin Media has at least made this one look attractive in a simple way with its sparkly black livery. There’s the inevitable flashing LED on the top but unlike some it actually shows some useful information: blue shows it’s powered on, green that it’s connected to HSPA, and red that it’s connected to GPRS. Flashing shows it’s trying to connect or searching for a network.


As most of these devices continue to be, this is quite bulky compared to your average modern day USB storage stick so you may struggle to fit it in alongside other USB devices if the sockets are close together and it’s easy to knock when plugged into the side of a laptop. Given this is a common complaint it’s hardly something to get hung up on though.

More annoying is the cap that’s not tethered so will inevitably get lost, as ours did. In the grand scheme of things, it’s unlikely to sway you from one USB modem to the next, being as they’re so tariff and network dependent, but considering how basic a feature this is, it is particularly aggravating when absent. It doesn’t even need to be anything clever, just include a little loop on the cap and one on the body. You can even leave us to provide the string!


Virgin Media has at least addressed one practical aspect: it has eliminated the need to carry around two USB sticks. If you pop a microSD card (up to 16GB cards are supported) into the slot hidden under a flap in the side, you can access your files and move them from computer to computer from the one stick. There isn’t, however, a socket for an extension aerial (to better pickup a signal) as found on the Huawei Mobile Connect E160E, used on Orange mobile broadband tariffs. Nor indeed does Virgin Media provide a USB extension cable as Orange does.

So the stick itself isn’t exactly setting the world alight but as with all these devices, the most important bit is how it performs. The stick supports a maximum download speed of 7.2Mbps and upload of 2Mbps on HSPA with connections to UMTS, Edge, GPRS, and GSM networks available. It offers quad band coverage for GSM networks, though only single band for UMTS, but given the cost of data roaming we don’t see this as a major flaw. 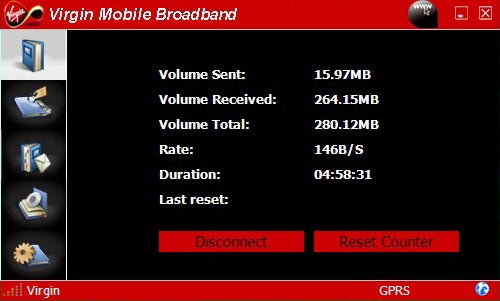 As per what we expected, download rates never actually reached anywhere near these dizzying heights, but we did get a steady 4Mbps whenever we were in a strong signal area. Of course, you can’t always guarantee being somewhere with a strong signal, but we found that in and around our office, when at home, and when on the train we were mostly able to reach this peak. 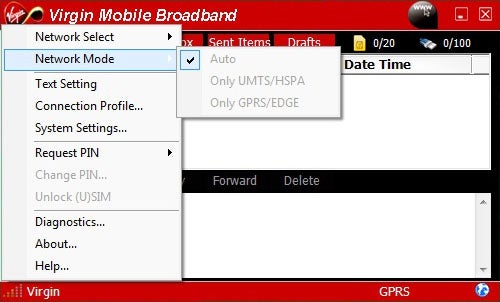 As for quality of service when out and about, on the train from Reading to London – a relatively slow local service – we found it seldom that you’d get a consistent service, fast or not. In fact, we came to expect to drop our connection about half a dozen times on each hour long journey. This may sound bad, but a moving train is a difficult usage scenario for a mobile device. Also, we seldom found this to be a problem for day to day web browsing and email checking. Of course, if you fancy video conferencing or some such then you will struggle.


The software provided with this dongle is pretty basic with non of the fancy usage graphs you get on the Orange Mobile dongle, for instance. However, it is simple and easy to use and provides you with all the basic information like whether you’re connected or not, what network type you’re using, and how much data you’ve sent. You can also send and receive SMS text messages, which is quite a useful extra. 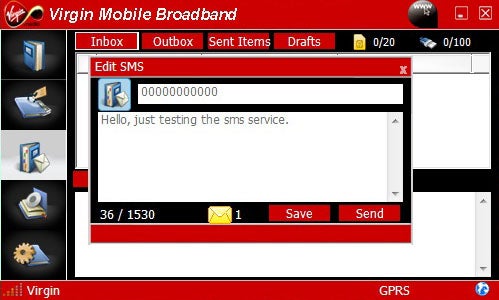 The dongle can be had for free on any long term (18-month) contract or for £24.99 on rolling 1-month contracts. Data plans consist of two options: 3GB for £15 a month or 1GB for £10 (there are no pay as you go options). These are reasonably competitive prices, though not the absolute cheapest.


Virgin Media’s latest mobile broadband package is reasonably competitively priced and has service on a par with most other providers. Its 7.2Mbps speed compatibility also results in a noticeably faster real world service than most 3.6Mbps rivals. However, use while out and about – particularly on the train – is still limited by consistency rather than speed. Also the dongle itself could at the very least do with a tethered cap.