In my opinion, the most desirable LCD format is a 24in widescreen with a resolution of 1,920 x 1,200 pixels. The pixel-pitch is about right to accommodate standard text sizes (no more squinting), and you can comfortably fit two pages of A4 (at 100%) side-by-side on the screen (less scrolling). The large desktop area is also great for editing images, playing games and watching movies.


However, I can’t justify the cost just yet and will make do with my dodgy 19in LCD with its 1,280 x 1,024 resolution and a not so standard 5:4 aspect ratio display area. But, if you really want a widescreen monitor and a little more width in which to operate then this offering from ViewSonic might be right up your street. 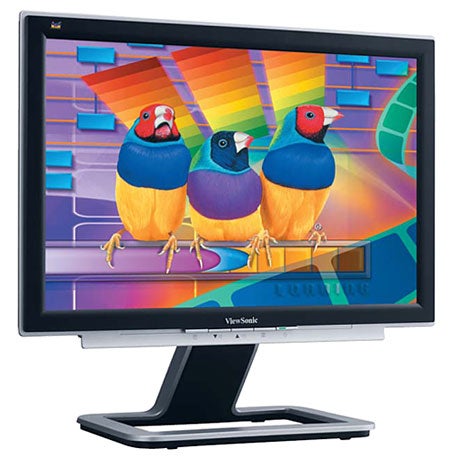 At just over £320, the VX2025wm is a well-priced 20.1in widescreen LCD, attractively designed with a matt-black bezel bordered by a silver coloured frame that runs down and around the large rectangular base. This base gives the VX2025wm plenty of stability and a central area in which to keep pens and other small paraphernalia from roaming around your desk. The downside is the lack of a swivelling function. The stand’s neck is also fixed to the base, so raising the display will either require some hefty text books or a wall mount/swing arm attached to the VESA mount – a shame as I found myself looking down at the display rather than directly at it. The only adjustable option on offer is a five degree forward, 20 degree back tilt mechanism. 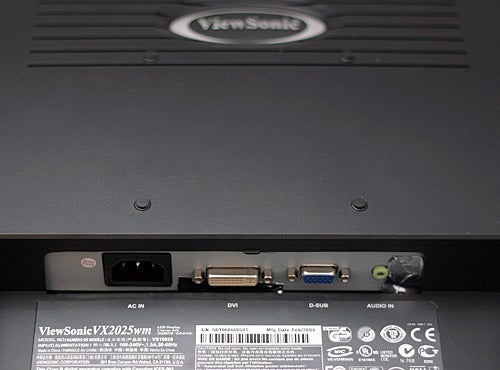 In fact, the whole design is very “ViewSonic” and little has changed in the X Series range for the last year and half or so. Around the back there’s a removable panel that hides the ports (D-SUB, DVI-I, kettle-type power socket, and audio-in) along with another removable panel that extends down the neck of the stand. Behind this you’ll find two cable grips which lock down the cables for a very neat routing solution. ViewSonic also provides both signal cable types, but it would appear you have to use your own audio lead. 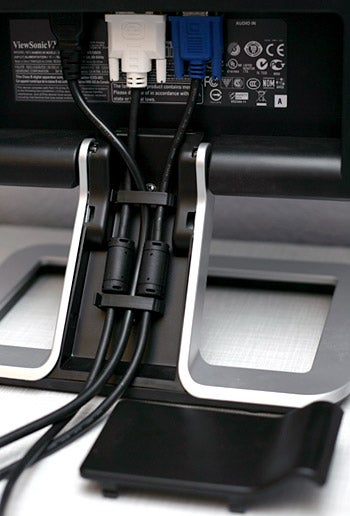 Other than those already mentioned, there are no extra ports such as S-Video, component video, composite, or a TV-tuner. The DVI port isn’t HDCP compliant either, so consider it a PC monitor, rather than a TV substitute. And, if you fancy watching some movies or listening to music, you might as well forget about the internal speakers. These are the quietest I’ve heard for some time, even at full volume. Better get yourself some standalone units, if you haven’t done so already.

The VX2025wm’s main difference is of course the widescreen aspect ratio and the 1,680 x 1,050 native resolution that comes with it. Now I’ll be honest with you. To me, this sort of resolution doesn’t really give you much of an upgrade from a 17in LCD especially when you consider the vertical resolution. A 17in LCD has a native vertical resolution of 1,024 pixels, where as here it’s 1,050 pixels – not a whole lot more. The 20.1in diagonal sounds big, but stand it next to a 4:3 20in LCD and the picture postively looks small.


In other words, I can best describe using an LCD with these specifications as akin to using a 17in LCD with a few extra inches on the sides. The standard font size looks almost the same, and believe me, there are many users out there that will complain that the “font is too small” (yes, one can increase the default font size, but this does not always work for websites with fixed pixel sizes coded into their cascade style sheets). 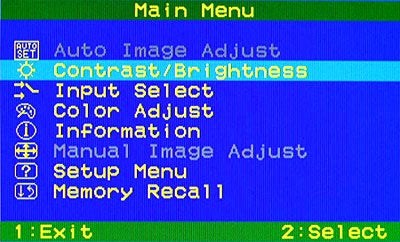 Moving on, setting up the VX2025wm is pretty easy thanks to a simple to use OSD and the five big robust buttons that run horizontally below the ViewSonic name badge. The button labelled “1” is for entering/exiting the OSD; the up and down buttons are used for menu navigation, adjustments and shortcuts for the volume levels; and button “2” lets you choose between the video inputs, mute the sound and select or implement any options or changes, respectively.

You have a good selection of picture adjustments too. Under both an analogue and a digital signal you can adjust the brightness and contrast, and use the presets for colour temperature (9300K, 6500K, 5400K, sRGB). For the more adventurous the RGB levels can be fine tuned individually. However, be careful with the contrast control as a high setting will invariably introduce a pinkish colour cast into the picture. Curiously, a sharpness mode is listed too, but is unavailable in this unit regardless of which video source you’re using. Other settings include preventing the non-native resolution warning from popping up, as well as making the OSD semi-transparent, moving its position, and setting its time-out.

By far the best setting for general use is the sRGB mode, which I used to test the display. Examining the picture using DisplayMate, together with general everyday use, some image editing, and a bit of movie watching revealed only a few issues. The colour ramps were very vibrant but showed some signs of compression in the low intensity end of the scales. This was echoed in the 256 greyscale tests too – smoothly graduated from highlights to mid-range with a small portion of the extreme dark end merging into a compressed black clump. This is only slight, but it does mean a drop in contrast (and thus detail) in very dark areas of movies, games, and images.


Furthermore, there was little evidence of motion smearing in games and movies thanks to a decent response time of 8ms grey-to-grey; (16ms, white-to-black-to-white). Colour accuracy also looked good in my test images, with natural looking skin tones and no untoward colour casts. Although the stated 176 degrees in both planes is arguable, the viewing angles were wide, with only a slight colour shift when viewing the screen from the extremities. 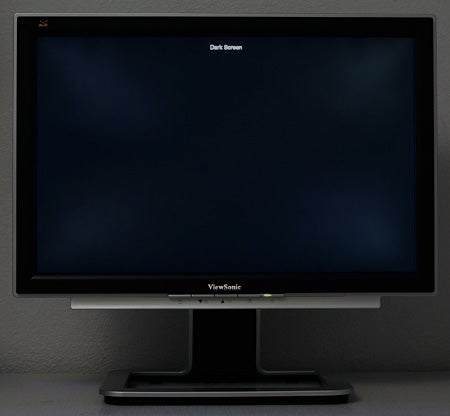 With some commendable image quality results, there was one factor that did disappoint – backlight bleeding. Display a black or a very dark screen on the VX2025wm and you’ll notice light emanating from all four corners. It occurs when light from the cold cathode tubes can actually be seen, allegedly a result of unequal pressure sealing of the LCD panel. In a brightly lit environment you won’t notice it, but if you’re playing dark games or watching dark movies in a dimmed room it certainly becomes noticeable.


It’s difficult to say if this is unique to the review unit I have here, but it certainly detracts from what is a generally good, widescreen LCD for a decent price.


The widescreen aspect ratio makes a good upgrade from a 17in CRT. Overall image quality is fine, and there are plenty of monitors out there with just a D-SUB port. It’s attractively designed and priced well too, but the lack of adjustability and the backlight bleeding issue might be a concern for some users.