There’s nothing quite like a projector for recreating the cinema experience at home, but their cost used to put them beyond the reach of most potential buyers. However, projector prices have dropped steadily over the years, something that’s well illustrated by the Viewsonic Pro6200 that we’re looking at here. This model can be bought online for a shade over £400, yet is easily capable of beaming out pictures that measure over 200 inches in size, much bigger than any TV you could buy for that price.

Taking the Pro6200 out of the box we were quite surprised by just how small it is. While it’s not as titchy as some of the LED projectors that are now on the market, it is a good deal more compact than most DLP models. Projectors are never really things of beauty, but Viewsonic has done a decent job of making this one reasonably handsome. The whole body is finished in gloss black with the aggressive looking grill pattern on the front and sides nicely balanced out by the curvier styling of the chassis. 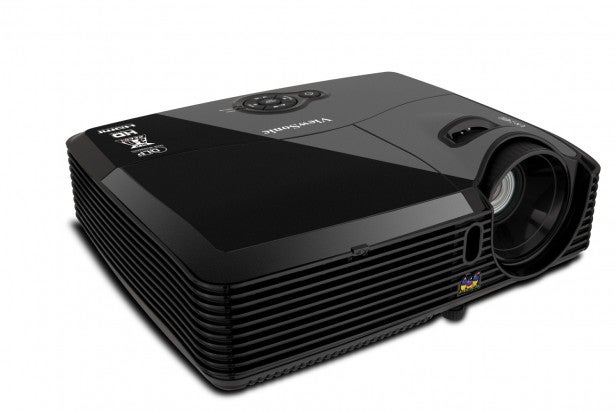 The layout is pretty traditional. On the front, next to the lens, is a small IR window for receiving commands from the small remote, while the power button and other buttons for controlling the menus are mounted on the top. The fan, which is a bit noisy for our tastes, blows hot air out the front of the projector, while all the various inputs are on the rear.

Connection options
For such a cheap model it actually has a pretty wide range of connections. Alongside the single HDMI port, there’s also composite and s-video inputs. Viewsonic provides two VGA inputs, and one of these can be looped through the projector’s VGA output back to a monitor. This feature shows that this model probably started life as more of an office projector than a home model. As there’s a 5 watt speaker built-in there are also minijack audio input and outputs ports for getting audio in ad out of the projector. 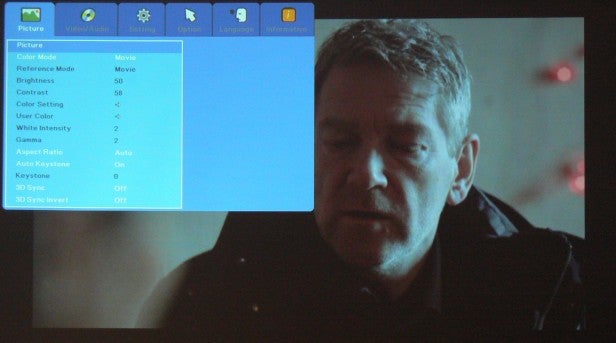 The Pro6200 doesn’t have optical lens shift, which isn’t surprising given its low price tag. However, this does mean that it’s a little bit trickier to set up than pricier models. Lens shift allows you to move the lens up and down and from side to side, helping you to project a straight image if the projector can’t be positioned central to the screen. As it lacks this it means that getting the Pro6200 to project straight images takes a bit of time, and potentially quite a stack of books to get it to the right height. The lens is also sat quite high, so really you need to position it on a low coffee table if you’re using it in a normal room.

Nevertheless, it has automatic keystone correction, so it will straighten up the edges of the projected image if it starts off as a trapezoid shape, although if you can avoid using keystone correction you’ll get slightly better picture quality, as it uses some of the projectors native resolution to correct the image. The manual focus ring on the front is very easy to adjust, though, to get images as sharp as possible, and the big zoom barrel positioned behind it also makes adjusting the size of the projected image a cinch, although there isn’t a huge amount of zoom at your disposal.

As you would expect the Viewsonic Pro6200 has a number of different picture presets including movie and gaming modes along with two user definable ones. There are also presets for Whiteboard, Blackboard and Greenboard setting, which again shows that this is a multi-use business projector rather than a dedicated home cinema unit. Nevertheless, it has a pretty good selection of calibration tools for those who want to get their hands dirty in the picture tweaking department. These include control over the colour temperature – low, mid and high – as well as the ability to adjust hue, saturation and gain for the six primary colours.

When you first fire this model up the thing that strikes you is just how bright it is. This is not a projector that needs a dark room in order to make its presence felt. Even with the curtains open its images retain a lot of their impact thanks to the extreme levels of brightness on offer. Whites, in particular, have a lot of punch, but colours overall appear to be strong and bold. The big margin between bright and darker areas of the image also gives the impression of decent contrast levels. 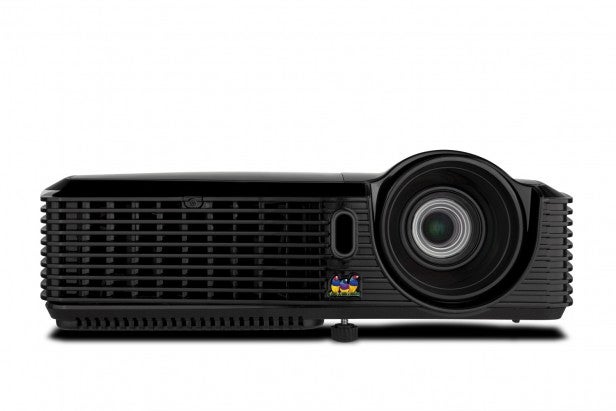 We tried it with some footy and Formula One footage and the results actually looked very good. Although the projector only has a 720p resolution, high definition footage still looked quite sharp and detailed and motion wasn’t badly handled at all – although there is a slight issue with this that we’ll discuss later. Even standard definition fare looks pretty acceptable, which certainly isn’t always the case on projectors in this price bracket. The DLP technology used in this model also means you don’t get any of the screen door-effect that you sometimes still see on low priced LCD models.

The problem, though, is when you switch to using it for movie watching. Any low light scenes quickly show up the projector’s weakness, as darker areas of the picture lose a huge amount of shadow detail leaving you with areas of darkness where you should see subtle shades of grey.

Poor black levels
Close the curtains and switch the lights off and the reasons for this become obvious. The projector’s black levels just aren’t very deep, and this compromises its overall contrast performance. Worse, some of the problems the projector has with colours become a bit more obvious with the lights turned down. Skin tones tend to be exaggerated and stepped rather than smooth, so you can actually see where it shifts from one colour tone to the other on actor’s faces. 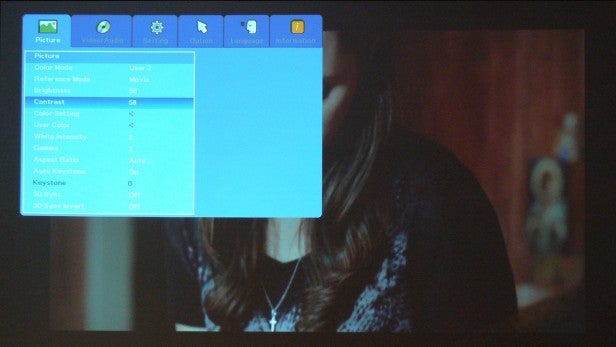 Also, there are a few artefacts caused by the DLP projection system that this model is built on. The Pro6200 uses DLP technology to create its images, and so it has a chip with tiny micro mirrors that tilt to create black and white images. These then have colours added by the use of a colour wheel that spins between the lamp and the chip.

The Pro6200 displays two of the most common problems that single chip DLP systems can suffer from. Firstly, although its motion performance is quite good, you do get some fizzing on motion around certain colours. Secondly you can see the ‘Rainbow Effect’ when it’s showing high contrast content. This is where you catch a fleeting glimpse of rainbow-style colour fringes on the edges of bright objects. It’s most noticeable on black and white images, especially white text against a black background during title sequences or rolling credits at the end of movies. Some people are very susceptible to this issue, while others hardly notice it at all. However, we found we could see quite a bit of it on the Pro6200.

Verdict
If you’re just looking for a modestly priced projector that can produce bright images for watching sport events like football, Formula 1 or the Olympics, then the Pro63200 isn’t a bad option, especially considering its rock bottom price tag. However, if you’re after a projector that you can use for watching movies, especially in a  darkened room, then you’re best look elsewhere, as the Pro6300 struggles to put in a convincing performance under these conditions.