The Verbatim Gigabit NAS External Hard Drive doesn’t beat around the bush with its nomenclature. There’s no clever or witty naming scheme, a complete lack of confusing acronyms and it’s not going to tell you it’s “NAS to see you, to see you NAS” (ho ho!). No, its function is its name, is its function. And that’s quite refreshing.

This business-like, sensible descriptor imparts a sense that this NAS device isn’t going to rely on parlour tricks or flashiness, but rather on the arguably harder task of fulfilling its role simply and effectively. Thus, the question of whether you need a Verbatim Gigabit NAS External Hard Drive is pretty simple: do you need an external hard drive and do you need it to be network-addressed via a Gigabit Ethernet connection? If so, this device meets all of your requirements.


Outwardly the Verbatim Gigabit NAS is a black, plastic-fronted, metal box measuring 200 x 115 x 50mm and weighing 1kg. The front showcases nothing but a status LED, whereas the rear houses a power input and button, a Gigabit Ethernet port, and two USB ports alongside a cooling fan outlet. Despite having a fan, the Verbatim Gigabit NAS is quiet enough to sit on a desk without causing a disturbance, albeit with the occasional interruption from the hard drive when it gets particularly busy. 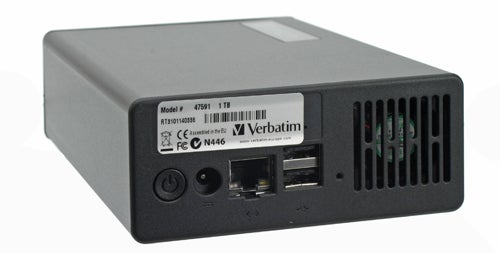 Inside sits either a 500GB or 1TB hard drive, with only about a £20 price difference between the two. FAT32, EXT2 or EXT3 formatting can be applied, with the latter two offering the added potential to apply drive-level encryption – just don’t forget your password! A NAS device with only a single drive may be nominally less ‘safe’ than one using multiple drives in a RAID setup, but used as a backup location, rather than as primary storage, the risk is low. The odds of your PC and NAS hard drive failing at the same time aren’t huge.


Verbatim includes Nero’s BackItUp Essentials backup software with the Gigabit NAS. Besides having a name comprised of really annoying ‘CamelCase’, this does a decent job of scheduling regular backups of your important files – and your not-so-important ones, too, for that matter.

The provision of two USB ports means you can attach a printer, without sacrificing the ability to attach an external storage device. Apple’s Bonjour protocol is present, should you need to share a printer with Macs on a network. Also on board is an iTunes server, and if you’re not shackled to Apple’s audio playback programme, uPnP serving of all your media will cover your streaming needs.

An FTP server might prove useful for remote access – there’s no web interface for file browsing so this is your only option. Likely of more interest to most users will be TorrentFlux, pre-installed on the Verbatim Gigabit NAS. This is a BitTorrent client, offering scheduling, RSS support and even user-based logon access (for all the use that is) through its comprehensive web interface.


The administration interface isn’t the most colourful I’ve ever seen, but its functionality can’t be faulted. The menus are logically laid out with quick access to all the functions you’re likely to need, such as adding new users and allocating them storage space.


This is all well and good. The problems arise when transferring files to and from the NAS device. On our network, at least, it was impossible to get Windows read and write speeds of better than 10.8MB/s and 8.6MB/s respectively, with FTP barely improving that to 11.8MB/s read and 9.4MB/s write. 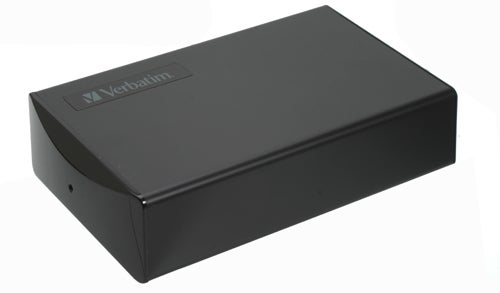 If you aren’t planning to regularly transfer large files, or perform backups that need to complete quickly, you likely won’t notice those transfer speeds, so they might not be an issue. However, when everything else works so well, it’s a shame that the Verbatim Gigabit NAS falls down at this hurdle, especially given its name – sub-gigabit speeds from a Gigabit NAS are less than ideal, to say the least.


Slower than hoped for transfer speeds aside, the Verbatim Gigabit NAS is a simple, functional NAS device. However, despite a reasonable price for a 1TB NAS, it fails to deliver on the promise of fast transfer speeds as its name implies.