It’s become something of a ritual between Riyad and I, to decide who has attended the best press events based upon the capacity of the USB drives full of press info that we inevitably end up acquiring. The current consensus is that anything less than 4GB isn’t worth its weight in silicon; with 8GB the preferred minimum to be considered “good.” You can imagine, therefore, the battle that took place (which I lost) to determine who would be taking custody of this 32GB flash drive from Verbatim when it arrived in the office. 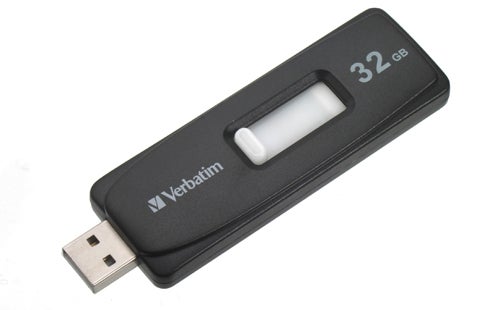 The Verbatim eSATA/USB Combo SSD 32GB, as the company chooses to call it, leaves little to the imagination with its highly descriptive, if unexciting, title. Like the OCZ Throttle before it, this storage device neatly incorporates an amble portion of flash memory (30GB of formatted capacity to be specific) into a fairly slim casing which offers both a USB and eSATA connector.


The SSD name is arguably a little confusing, given the portable nature of this drive. Still, it can’t be denied that the storage is solid state, all 32GB of it. Plus, if you really wanted to you could use this like a conventional hard drive, permanently plugged into your system. The drive shows as a hard drive, rather than a removable storage device, in Windows, after all. 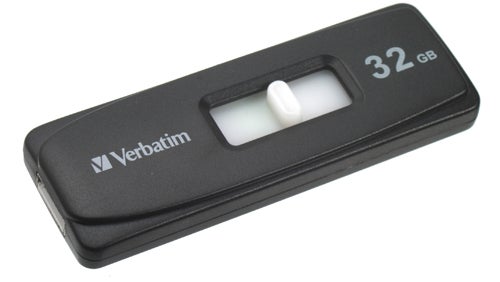 Unlike the OCZ Throttle, which had a mini-USB connector, this drive’s is full size. Even more nifty is the slider arrangement which hides the connectors, ensuring they won’t break off in your pocket. A slide to the left reveals the USB connector, to the right, eSATA – both locking in place securely until the slider is depressed.


Verbatim also supplies a ‘Y’ shaped combined USB/eSATA cable, so that the eSATA connector can still be used with unpowered ports. If you’re transferring particularly large files it’s definitely a better option than deferring to USB transfer speeds which can be outright painful at times. Though of course those more worried about pocket space than how long it takes to copy the latest episode of ”Top Gear” will doubtless appreciate not requiring any cables to use the drive.


Not one to take such claims at face value, I grabbed a Snow Leopard DMG I happen to keep handy and swapped it to and from an eSATA-equipped computer to the drive and back three times, averaging the result. The results speak for themselves, with real-world transfer rates over USB of 27.6MB/s write and 31.6MB/s read with eSATA providing 40.7MB/s write and 73.6MB read. In other words, eSATA is not only, as claimed, significantly faster than USB (what a revelation) but more impressively also faster than Verbatim suggests it should be – awesome!

That would be somewhat good news for Verbatim, but the OCZ Throttle is cheaper than the eSATA/USB Combo SSD 32GB while still providing similar transfer speeds. The former can be found for less than £70, where as the latter is currently sitting at about £90. Hopefully, this will change once a few more stores get stock in, but for now it’s prohibitively expensive.


That’s a shame because Verbatim’s drive is still otherwise an attractive proposition. The retractable ports, for example, are an excellent design feature and the inclusion of a full sized USB connector, rather than a mini-USB port as featured on competing products, is to be applauded – carrying cables around with a flash drive is an utter chore.

The inclusion of encryption software is another point in favour of the Verbatim drive, too. Run directly from the drive, this applies 256-bit AES encryption to all files placed on the drive, on-the-fly as they’re transferred. While this does slow transfers down a little – by how much will depend on the processing power of your system – it does offer some piece of mind if you fancy storing important data on the drive; which with 32GB of capacity you may well wish to. The catch here is that the software supplied, EasyLock, is a 30-day free trial version – you’ll have to pay for more use than that. If that software were free with the Verbatim eSATA/USB Combo SSD 32GB, or the overall price were lower to start with it would be a much more compelling buy.


The sliding connectors and the use of a full size USB port are excellent design decisions. However, when other flash drives offering similar connectivity and transfer speeds are available at significantly lower prices, simple common sense should indicate which is the better choice and, here’s a clue, the Verbatim eSATA/USB Combo SSD 32GB isn’t quite it.