There are a lot of software packages which claim to repair your PC and improve its performance. They range from the terminally useless to the extremely valuable and the trick is to know which to pick. Fix-It Utilities 7 has good credentials, as it comes from VCom, whose Partition Commander software for managing hard disk partitions is well regarded. Fix-It is distributed by Avanquest.


The opening screen of the program keeps things simple and concentrates on single-button quick-fixes. The two main Fix-It Wizards are for protection and optimisation and each of these perform several maintenance tasks. There are also two status bars which show you how well your PC is currently doing. They’re likely to show your PC in poor light the first time you start Fix-It, and improve considerably when you’ve run some of the Wizards. 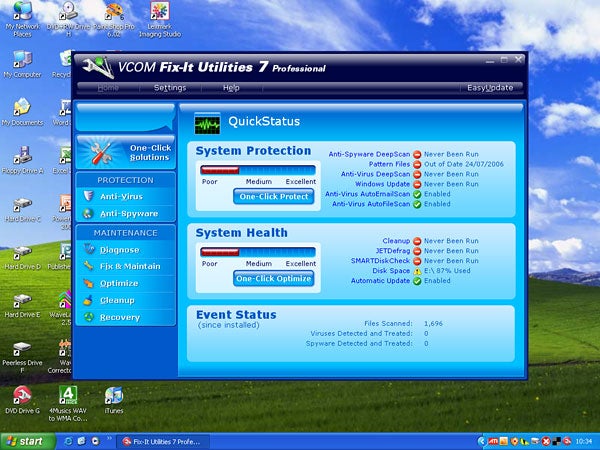 The one-click protection Wizard does a virus scan and one for adware, using Trend Micro routines. Trend Micro is an established anti-virus producer and the version provided here includes automatic updates for new virus and adware signatures. On our test system it found no viruses, but deleted four cookies, which may or may not have been causing problems.


The optimisation wizard starts by defragmenting your drives. This is an odd duplication of a function already available in Windows, but you’ll come across others as you work through Fix-It Utilities. Described as JETDefrag, the VCom utility doesn’t appear to be any quicker than the Microsoft one and doesn’t provide a status display to show contiguous and non-contiguous files on your hard drive.


A lack of status display is a common feature of several of the wizards, which simply go about their business behind the scenes and leave a static, text-only display with comments such as ‘Recovering wasted disk space’. A more informative interface would make the software easier to use. 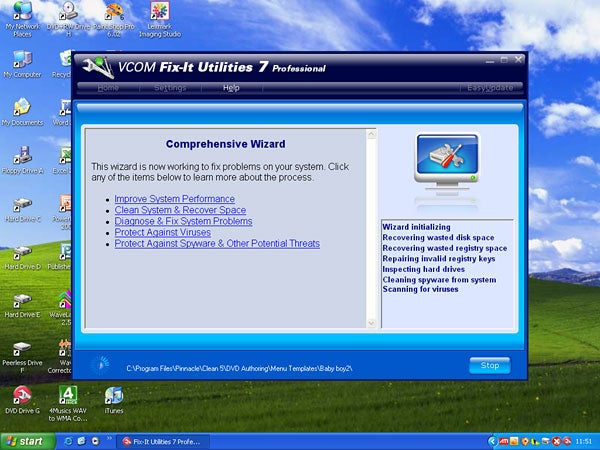 Not that you necessarily want to see Fix-It working. A number of its utilities will run happily in the background and the software includes a scheduler, so you can run them overnight or at mealtimes, when you’re not using your PC.


As well as these two wizards, there’s a whole screen of one-click fixes, including the Comprehensive Wizard. This one goes through five stages covering system performance, cleaning and recovering space, diagnosing system problems, an AV scan and another for spyware. On our test system, this wizard took over three hours to complete, though 95 per cent of that was for defragmentation.

So how effective are the protection and optimisation Wizards in improving your PCs performance? Having run the Comprehensive Wizard on an Athlon XP 2100+ under Windows XP and on a 2.8GHz P4 under Windows Vista Business, both were running a little snappier and both had more disk space available. Fix-It Utilities isn’t going to turn a sluggish, cluttered slow-poke of a PC into a svelte gunslinger, but it will make just about any machine more secure and tidy.


We’ve highlighted the main utilities included in the suite, but there are a lot of one-shot applets, too. Disk Cleaner, for example, checks your recycle bin, temporary files, and ‘files unchanged since the year 2000’, among its 17 categories of possibly redundant files. Interestingly, it spotted 349 unchanged files on a two month-old Vista system. 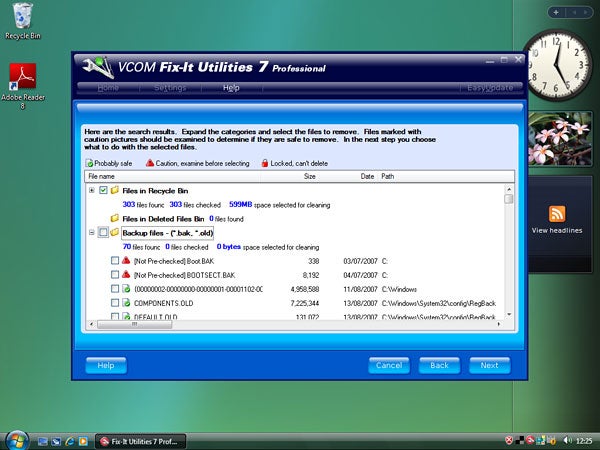 More weirdly, it offered to delete all jpgs, all gifs or all files over 5MB. It’s hard to think of a valid use for these selections. Fortunately, all files are deselected for cleaning by default and you can view and select individual files within each category.


Startup Commander is another useful tool, which shows all the programs that run automatically when you start your Windows system. It gives guidance on which are essential and shouldn’t be touched and which you can consider disabling if you want to improve your start up speed or prevent a particular piece of software from running. 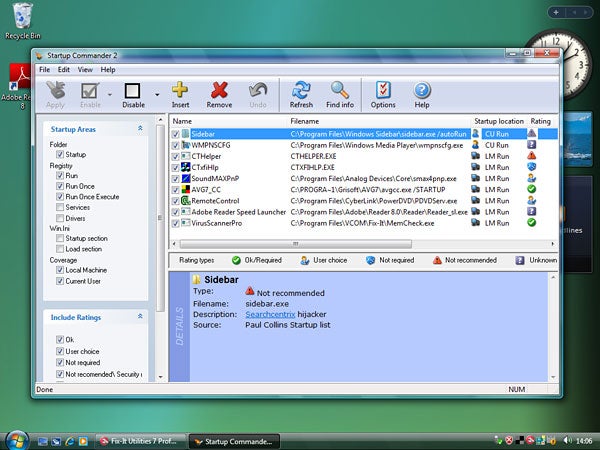 Cunningly named, Recovery Commander handles problems with Windows installations which have stopped running. In particular, it can run from the ground up, even if you can’t get into Windows, and restore your system to a previously working state. Yes, Windows can do this, after a fashion, through its text-mode start-up screens, but Recover Commander is more comprehensive and gives you the option to select different restore points, rather than just the last known, working one.


There’s quite a bit of duplication with Windows utilities in the functions provided by Fix-It Utilities. Several of the tasks the program can perform are already available, if you know where to look. There’s some advantage in bringing them all together in one umbrella application, but the real benefit of Fix-It is the wealth of different tools on offer. Most day-to-day diagnostics and repairs are catered for. As a final incentive, the asking price of £30 is for a three-use licence, ideal for a family with several PCs or a small business.