What is the Varidesk Pro?

Off the back of a number of recent reports about the health problems associated with sitting at all day there is increasing interest in other ways to work at a desk. Now standing desks and even treadmill desks are becoming – at least ever so slightly – more common sights.

But let’s face it, completely changing your desk for a standing one, let alone installing a treadmill, just isn’t practical for most of us, which is where the Varidesk comes in. Instead of a wholesale swap to an upright desk, it sits on a normal desk and offers the ability to switch between standing and sitting.

The secret to the Varidesk is it uses a pneumatically assisted mechanism to raise and lower its entire top work surface. So you place your monitor(s), speakers and any other desk decoration you may have on this top surface then by pressing the two handles on the side you can lift the surface up to whatever height you desire, allowing you to alternate between standing and sitting as much or as little as you like.

The Varidesk itself just sits on your existing desk, with no need to secure it in any way. It doesn’t even need putting together out the box – it comes out in one piece and is ready to go straight away.

Varidesk is the name of the company as well as its products and in fact two different models are available here in the UK (Varidesk Single and Varidesk Pro) – with a third available in the US (Varidesk Pro Plus).

The Single offers a top work surface of 30 x 20inch while the Pro stretches this to 36 x 20 inches.

Meanwhile the Pro Plus adds a lifting keyboard and mouse section, which removes the need to move them each time you swap desk positions, plus it allows for even finer adjustment of their position relative to the rest of the desk. 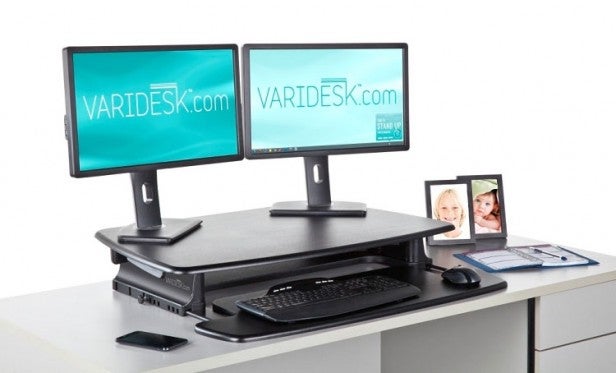 One of the most obvious downsides of the Varidesk is that, somewhat inherent to its design, it has a certain utilitarian ugliness. This is first and foremost a practical device that would likely always struggle to hide its steel lifting arms, pneumatic pistons and other supporting structures.

That said, there are a few tweaks that could improve the current Black vinyl covered MDF and black painted steel look. For a start, a choice of colours might be nice – it strikes us that black is about the least likely colour for a desk. Also, while the curved edges of the various desk surfaces may be practical from a safety point of view, they don’t really marry in with any other aesthetic. Instead, a more minimalist square design might fit in a little better. A choice of materials might be nice too – a hardwood top anyone?

Maybe if all goes well Varidesk could in the future make a premium version that offers all those luxury materials that people now look for in their office spaces — the stunning brushed aluminium stand of the likes of the Apple Thunderbolt Display might be a good place to start for inspiration.

There are a couple of practical
considerations too. The outward curving front of the desk adds a couple
of inches to its depth but doesn’t actually add anything in terms of
practicality – it’s not like most keyboards curve outwards too.

The
keyboard and mouse tray also slightly misses the mark. Although it’s
plenty wide enough along its front edge, it either isn’t deep enough or
isn’t wide enough between the two lifting sections. The result is that
it’s rather impractical to use a mousemat and even without one we found
it a little cramped using the mouse just on the surface. This is because
the cutaway for where the surface slides round the lifting mechanism
just encroaches on the top right (for right-handed mousing) of the patch
where we’d normally be using the mouse.

Most crucial of all,
though, is that if you use a wired keyboard and mouse the wires end up
being a constant headache. If you feed them straight backwards, where
they’re most out the way, then you have to unplug them and reroute the
cable every time you switch between sitting and standing modes. The
alternative is routing the cables round the side, but doing this ends up
with them looking messy and often getting in the way, particularly when
it comes to sliding the mousing surface back out the way. 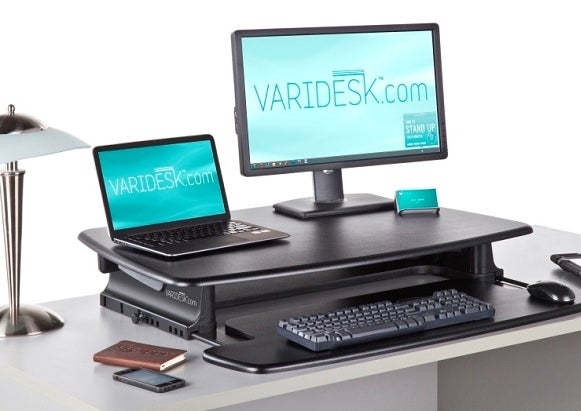 All
of this adds up to making the Varidesk slightly impractical for gamers
in particular, who will generally want a large wired keyboard, mousepad
and top notch wired mouse. You can certainly get by, but it’s not quite
the slick experience you might hope for. Likewise, anyone that uses a
graphics tablet will find both the top and bottom surfaces a little
cramped.

You can of course just use wireless peripherals.

The
other potential stumbling block is that you will need a height
adjustable monitor to maintain a comfortable typing and viewing position
when both standing and sitting, due to the height difference between
the top and bottom surfaces.

Once you’ve setup your monitor and
found a mouse and keyboard arrangement that works for you, it really is
effortless to switch between standing and sitting. The two handles on
the side are easy to locate and actuate and, although there’s a little
bit of force required to lift the surface up – and push it back down too
– it shouldn’t be a problem for most.

Once up, the surface stays
rock solid. Indeed, the Varidesk is so hefty that we found it didn’t
slide or wobble at all when extended or while being extended. Instead it
was our desk that was the weak link with its wobbly legs.

If
you lean too hard on the desk it will occasionally shift a little as
the clamps ratchet into a locked position – a bit like when you pull the
handbrake on the car, it has to click past a certain point to lock –
but it never once felt like it was even close to giving way.

Varidesk Pro: So does it work?

So
the Varidesk is a bit utilitarian in its design and there are a couple
of small issues with its usability but it’s largely a practical solution
to the problem of accommodating a standing desk. The only question left
to answer now is whether we feel standing at your desk is actually of
benefit.

I’ve spent a month using the Varidesk and you can read my Living With A Standing Desk piece of a more in-depth look at what it’s like. The short version, however, is that there benefits to be had provided you’re disciplined enough to slip into a regular regime, and fit enough to adapt to the change.

The experience of standing to work is amazingly
invigorating and a great way to keep you on your toes throughout the
day. It seems to be the combination of the simple act of having to
engage your legs and – at least for this reviewer – the slight sore-foot
fidgeting that kicked in after only a few minutes of standing.

It’s
said you can tell just by listening to the radio which presenters stand
up and which sit down, and it’s this same sense that applies here. When
stood up the whole body is involved in any given action – a wild
gesticulation or just tapping your foot along to some music (if you’re
allowed such things at work) – and this translates to a more alert mind.

What particularly sold the Varidesk approach to me was that,
beneficial as standing was, we seldom lasted longer than half an hour of
standing without getting uncomfortable. So, being able to just quickly
return to a normal seated working position was great.

Over my
month of testing I experimented with various regimes, but the one that
seemed to work best was standing for about three half-hour/45 minute
sessions throughout the day. Generally these were first thing in the
morning, shortly before lunch and early afternoon. If you’re more used
to standing for longer periods of time (and surely you would build up
more tolerance over time) then you may end up splitting the day in half
or alternating every hour. Either way, the freedom of the Varidesk would
still suit. 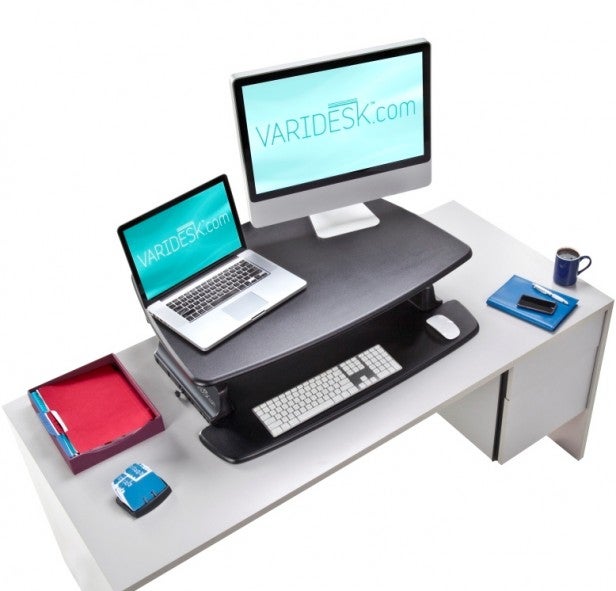 Should I buy the Varidesk Pro?

If
you’re interested in trying out a standing desk arrangement there are
certainly cheaper ways of doing so – even building an entirely new desk
so you can switch between a sitting and standing arrangement could
easily be done for £100 or so. However, we can think of no other
solutions that are as space efficient, effortless to setup, easy to use
and quick to switch as the Varidesk.

There are definitely
slight tweaks that could be made to its design, from a practical
standpoint, and it isn’t likely to be a stylish addition to most offices, but largely it’s well built and practical.

If
you simply want the fastest, most practical, and relatively affordable
way to try a standing desk the Varidesk is the way to go.