Welcome, if you will, to the third-age of MMORPGs. Let’s say the first began with Ultima Online, EverQuest, Asheron’s Call and Dark Age of Camelot – games that had a deep appeal for a particular audience, but could never quite manage to attract a mainstream following. Then came the second age. City of Heroes, World of Warcraft, Eve and Guild Wars started to knock out the elements of the genre that put off the majority of gamers, and perfectly suited those who had just taken up broadband and were looking for something to do with it. Well, now we’re ready for a third age; a range of games that, essentially, take the post-WoW MMORPG as a starting point and run from there. 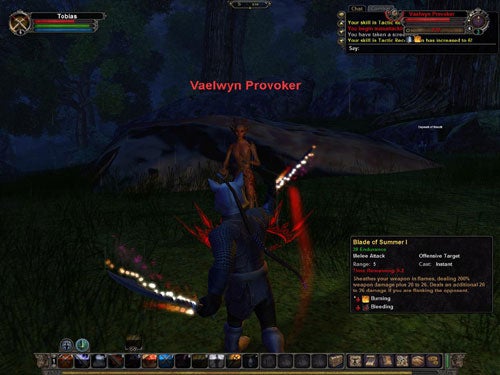 Make no mistake. WoW is very much the elephant in the room where these games are concerned. All the players in the market – new and old – know that they need to either compete with Blizzard’s monster or attract a different audience. While some games are doing the former, using big-name licenses to pull in mainstream punters (Lord of the Rings: Shadows of Angmar and Age of Conan come immediately to mind), Vanguard seems to be positioning itself slightly differently. Its geneology – developer Sigil was co-founded by Brad McQuaid and Jeff Butler, both instrumental in the development of EverQuest – might give you the idea that Vanguard isn’t exactly targeting the first-timer. In fact, it seems designed to provide a bigger, more complex, more grown-up alternative to WoW. Think more choice, more depth and fewer long-term limits. 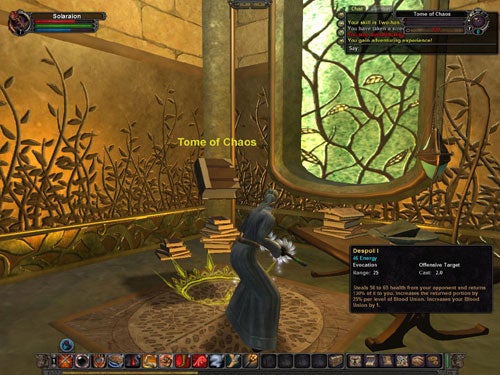 ‘Bigger’ and ‘more’ are very much the themes here. The world itself – Telon – consists of three huge, completely explorable continents, modelled after European, Asian and Middle Eastern settings. You also get a huge range of character races and classes and some enormous skill trees to start off with, plus such lofty long-term goals as flying mounts to ride on and virtual property you can build and decorate. There are even areas that you’ll only be able to access by air or boat. ‘Forget the other MMORPGs’, Vanguard seems to be saying ‘I want to be your one and only, not just now, but for the rest of your life.’

To this end, you get one of the most flexible character setups in the business. Sigil has made a lot of the 19 different playable races and 15 classes, and they’ve been right to. As well as the usual variations on Elves, dwarves and Halflings, there are several different races of men (in civilized and barbarian varieties). On top of these, the game throws in furry fox-like critters and cat-people in the Asian continent of Kojan, a race of scary-looking wolfmen, plus orcs, goblins and half-giants. The professions are sensibly split into defensive and offensive fighters and defensive and offensive spellscasters. However, as well as the usual tanks (the Warrior, the Paladin), ranged weapon and stealth types (Ranger, Rogue), healers (Cleric and Shaman) and heavy weapons dudes (the Necromancer, Sorcerer and Druid) there are some well thought out hybrids. The Dread Night, for example, is basically a tank with fearsome magic powers, while the Blood Mage is a healer with a nice side-line in offensive spells. 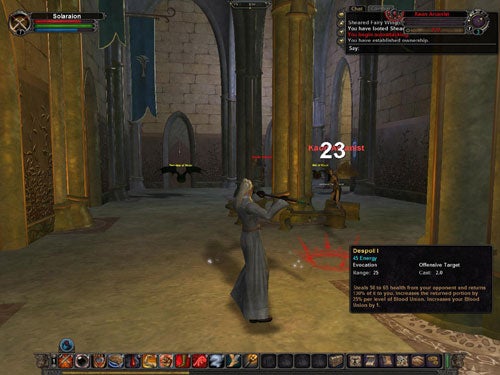 As usual, not all professions are open to all races, but all in all, there’s such a massive choice here that if you can’t create two or three characters you’d like to play, there must be something wrong with your imagination. Producing all these variants must have required a huge commitment on Sigil’s part, and I suspect that balancing them must be a nightmare. Only time will tell how well they manage it.


Like most MMORPGs, Vanguard is primarily combat-driven, but real effort has also gone into making sure that it’s not all dull right-click then sit-back stuff. Like Guild Wars or City of Heroes, you get a nice, responsive system of attacks and defences where the combos almost chain themselves together, and Vanguard also throws in a good system of reactive attacks and counters that only become available when specific conditions are met. More impressively, the game shows a real commitment to non-combat gameplay. I don’t really go in for crafting myself, but you can see how much thought has gone into virtual manufacture and shopkeeping. 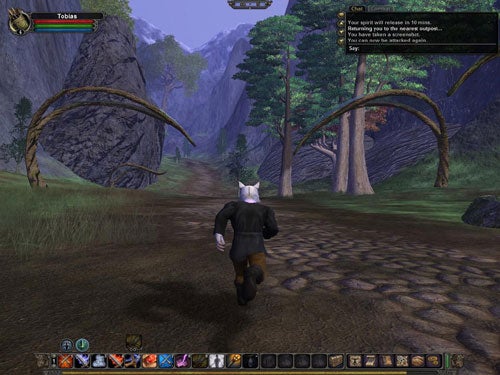 Diplomacy, meanwhile, is something new entirely. Modelled on a trading-card game, the system has you playing debate-themed cards in order to drive a gauge up and down between you and your ‘opponent’. Things are complicated by the fact that each card played allots you and your opponent certain colour-coded points, and you both need these in order to play specific cards. It’s relatively complex at first, but there are good tutorials and it’s certainly not impossible to get your head around. What’s more Vanguard really runs with the idea, throwing in a whole tree of diplomacy quests that offer an alternative means of advancement.

Perhaps the biggest draw of Vanguard, however, is the world itself. Powered by a heavily modified Unreal 2 engine, this is a feast of gorgeous textures, lighting and reflection effects, where – provided your system has a high-end GPU and a lot of RAM, you can expect enormous draw distances, truly panoramic landscapes and some great atmospheric effects (even if the rain is over-used in some locations). This is a game where even the trees look amazing. There are glitches here and there, and the odd clumsy bit of modelling, but overall this is as close to Oblivion as MMOs currently get. A lot of attention has clearly gone into landscape, architecture and creature design, and – as in WoW – it’s tempting just to explore and see everything the three continents have to offer. 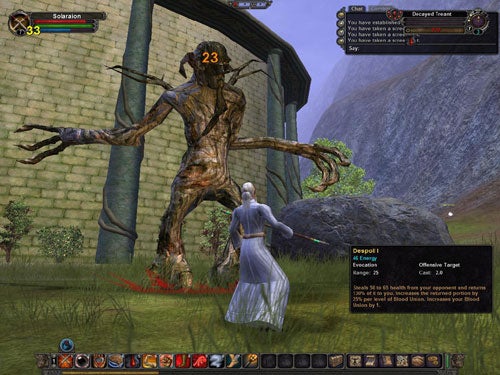 However, while the world looks amazing, and the artistic style is frequently striking, there are several things that pull you out of the fiction. The first disappointment is how static the fauna is. Non-hostile creatures stand around waiting to be hunted down and battered into submission, while even hostiles don’t always react even when near-neighbours are attacked. Of course, some of this is to maintain a reasonable difficulty level – you don’t want the mobs ganging up at the opening of the game – but you can’t help feeling that WoW handles its menageries better. There are also a lot of areas in which everyone just seems to be standing around, waiting for the player to interact. This has always been the case with MMOs, and may always be so, but there are times when Vanguard’s illusion of its living breathing world simply isn’t as compelling as WoW’s, despite the clearly more advanced state of the visuals. 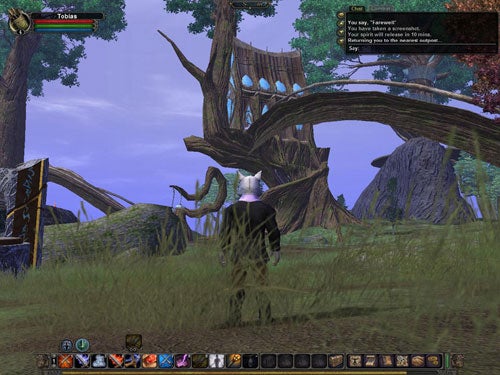 The most serious issue, however, is the underlying game style. Vanguard wants to provide a world of epic, group-based adventure, so you can’t expect the instant travel options and AI henchmen of a casual-friendly game like Guild Wars, but even given this there are long periods where Sigil’s baby feels like a good old-fashioned grind. For a game that prides itself on non-combat routes to advancement, there’s still a lot of emphasis on the classic ‘bash x Grey Wolves then return to me’ quest, to the extent that some quest-givers even give you a shopping list of monsters to be slaughtered. WoW and Guild Wars both do it to some extent, but both are usually better at hiding it. It’s a shame, because there are occasions when Vanguard does a fantastic job with its quests, linking several together as part of one mini-crusade against a particular villain, or pitching you as a hero who can halt a dark conspiracy.

At these points, the game really takes off, but there are huge periods where it doesn’t and it all seems like hard work. Dying certainly doesn’t help. Up to level seven you simply reincarnate at the nearest base – a nice sop to keep us noobs from throwing in the towel – but after that you’re faced with a choice between paying heavy penalties or having to return to your place of death and loot the grave to get your kit back. In WoW, you could do so as a spirit and only had to get near the mark, making recovering your possessions a hassle but not a particularly perilous one. In Vanguard, however, you have to travel in your vulnerable, physical form without armour and with only basic weaponry, to pretty much the exact point where you died. This means you can actually die several times on the way to get your stuff back – not what I’d call entertaining. 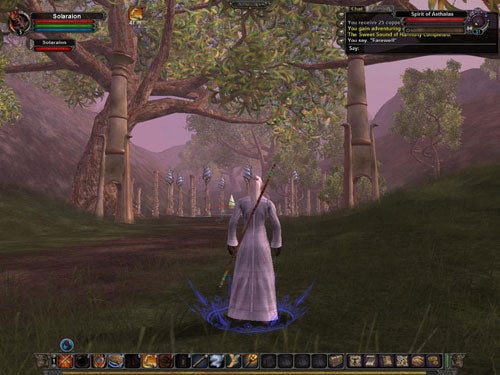 Vanguard also gets hard on solo players fairly early. Again, this fits in with the classic ethos, but it means the game isn’t as flexible as WoW or Guild Wars. We don’t always have our buddies on tap to play with, and it’s not always easy to find a pick-up group to play with, particularly at times – and there are many – when the servers aren’t so full.


The main reason to persist is potential. While the early game can be a bit of a grind, there is a real feeling that, should you find a good group and put a lot of time in, there’s a fantastic world to explore here. Telon has an almost dizzying sense of scale, and even in the early stages you can see epic narratives building up. All the same, do you really want to grind today so you can have jam tomorrow, when other games give you jam right from the start? 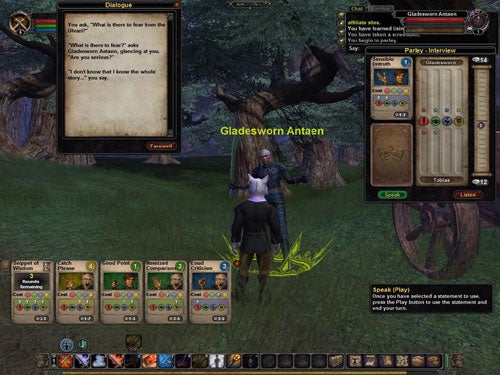 Perhaps the real key to understanding Vanguard is that even though it looks third-generation, it’s driven by an old-school mentality and how you respond will depend on how much you can share it. Like any good MMORPG – and this is a good MMORPG – it’s addictive, huge and habit-forming. It’s also well-designed and thoroughly gorgeous to look at. Yet it demands the sort of commitment that means it will never pull in the casual crowd that took to WoW and Guild Wars in such numbers. Provided player numbers stay up or even grow, Vanguard will give back everything that you put in. The question is, do you really have the time and energy to give it in the first place?


The first of the third-age MMORPGs looks fantastic, but feels a bit of a throwback to the first. A great step-up from WoW if you want more complexity and choice, but the more casual player is still better served by WoW or Guild Wars.