Way back in the mists of time – well, the mid nineties – a little known company called Binary Research created a product that revolutionised large scale computing. It was called Ghost and, like so many computing products, its premise was really quite basic – it was there to save you time. Rather than having to go through the monotonous task of installing your operating system, office productivity suite, and all your other software on each computer throughout an office, you could now simply copy the whole lot verbatim from one PC to the next. The process is generically known as disc cloning and it is now ubiquitous in business computing.


In the intervening ten years since Ghost first arrived, Binary Research has sold the rights of Ghost to Symantec and several other companies have developed competing software. However, the basic functionality of disc cloning software has moved on very little and one fundamental problem still stands in the way of the perfect deployment solution. Ghost, and all its rivals, relies on the hardware on the original PC being identical to that of all the other computers the image is to be deployed to.


However, in a typical company, you will have workstations for intensive tasks, basic computers for administration staff and a variety of laptops for everyone and each different computer type may use different software configurations for optimal performance. So you need to have several disc images, for all the different configurations, and they all need to be kept up to date.

It was this problem that Binary Research identified as a gap in the market and it set about creating a solution to the problem. The result is called the Universal Imaging Utility (UIU).


What this software does is enables you to create a single Windows installation which contains no drivers but does have all the software you require and is configured just as you like. The UIU then adds its own database of drivers (which is about 300MB) to the image and, using Windows System Preparation Utility, creates an image that can be deployed to any machine. When the image is deployed the drivers are automatically installed using the inbuilt hardware detection of Windows. The key aspect is that the driver database is very regularly kept up to date and it uses only the most basic files required to make the device operational, thus keeping the image size down. So, when updating your images you simply download the latest version of the driver database and create the new image.


The Universal Imaging Utility is not a replacement for cloning software, however, and is only used to prepare the original image. Once prepared you clone the computer as usual with your preferred imaging tool. It is also only compatible with Windows 2000 or XP but I’m sure you aren’t surprised to learn that.

To test the software I created an image using a standard desktop PC then deployed it to a laptop. Now this isn’t something I’d recommend you normally do as desktops and laptops tend to be configured differently, and you should create an image for each type of machine, but it will give the software a stern test.


The PC is one of our test beds that currently contains an MSI 865PE Neo2 motherboard with onboard sound, Radeon 7500 graphics card, and various other bits and bobs. The laptop is a Pegasus 335 T72 from Rock which contains a 945GM based motherboard with integrated graphics, DVB-T tuner, and onboard sound – so there’s quite a difference in hardware for the UIU to cope with.


The original image was a Windows XP installation that was configured with two users and of course, no drivers – no additional software was added so as to keep the image size to a minimum. To prepare the image for transfer you need to download the System Preparation Utility files from Windows Update, and extract them to a useful location. Then you simply run the UIU application, follow the setup screens, and let it do its thing. 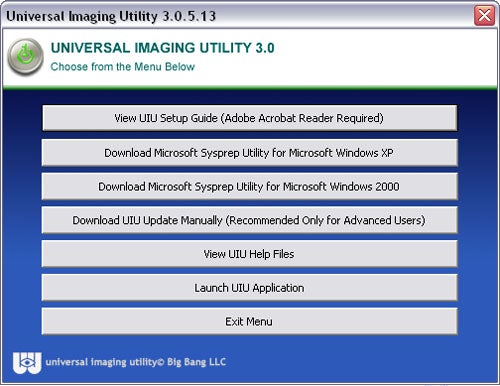 As you run through the various option screens, the process is fairly self explanatory and you are well guided through. Along the way, you can choose to add in support for SCSI drives in case you might be deploying to a SCSI environment. However, there are just two main option screens.

The Configuration options screen corresponds to the usual information you input when installing a new copy of windows. Thus you can select the initial username, add the computer to a workgroup or domain, input the Windows license key, change time zone and screen resolution. Then, when the image is deployed, all these setup screens are skipped over which minimises user interaction.

Advanced options include the number of times the PC reboots after the image has been deployed enabling any software/driver installations that require a reboot to be completed before the technician has to interact with the PC.


Once you set it going, the process takes about ten minutes after which you are then ready to take an image of the drive and copy it to the rest of your computers.


Our test worked as expected and the UIU managed to install all our laptop’s hardware without a glitch. This should be the case for ninety percent of users but there’s always the chance that the driver database doesn’t contain the driver you need, in which case you will have to use the old tried and trusted method of manual installation. However, the database is regularly updated so this should never be a long term problem.


Licensing for the UIU is measured by number of deployments, or seats, so that each computer that is receiving an image must be covered by the license. Pricing starts at $20.14 per seat for the first 199 seats and drops incrementally to $10.07 for up to 4,999 seats. Above 5,000 seats, the price is simply listed as ‘CALL’.


The Universal Imaging Utility is the next logical step in large scale system deployment and it, or variations of it, are likely to become the norm over the coming years – just as Ghost has. And, with pricing starting so low, it seems Binary Research has another sure fire hit.