Available on PS4
On paper, the PS4 version of Ultra Street Fighter IV sounds like a thrilling junction point between the world of retro games and the state of the modern console art. On one hand, it’s the latest iteration of a 2D game that launched six years ago, and even then went out of its way to faithfully preserve the basic attributes of the very earliest beat-em-ups. But on the other hand, it’s the first new-generation version of the game which sits at the very top of the professional beat-em-up competition tree – and is only available, in truly 21st-century style as a download (for a fairly reasonable price of £19.99).

However, often in life you find a wide gulf between what looks good on paper and reality, and that’s where the PS4 version of Ultra Street Fighter IV unhappily resides. While the game itself – as anyone who played it on PS3, Xbox 360 or PC will be aware – is a very good one, the PS4 port is an unmitigated disaster. Even Capcom has washed its hands of it, having sat back and let Sony take charge of the jump from PS3, via a developer called Other Ocean. Damage limitation, admittedly, is already in full flow, with both parties promising its more egregious shortcomings will be addressed in short order via updates and patches. But it does lead one to wonder how come it was ever allowed out in the wild in such a state. 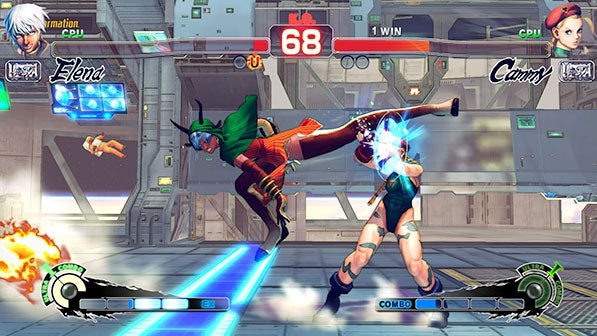 Instant impressions are pretty bad: it tells you to press Start when the PS4 doesn’t have a Start button.

Playing the single-player Arcade mode is instantly underwhelming: despite the leap to 1080p full HD resolution, it doesn’t really look any better than the PS3 version, with an odd blurriness and a washed-out, overexposed colour palette in evidence. And the Trials mode, in which you can learn a character’s moves one by one, looks awful, since it uses character skins from an older version of the game (as, admittedly does the PS3 version). Because of that, the new characters added to Ultra Street Fighter IV, which constituted a large part of its appeal, can’t be put through their paces in a trial. The PS4 port, surely, provided the perfect opportunity to redress such a glaring omission?

At least it plays OK in single-player mode, although the hardcore have complained that some of the characters’ special moves have been tampered with – notably that Decapre’s teleport has been truncated. Unless you’re a seasoned Street Fighter-head, you probably wouldn’t notice things like that, but the fact is that few franchises have a following that is more observant of fine details (unsurprisingly, given that Street Fighter’s long history is one of detail-tweaking), and such basic blunders render the PS4 version demonstrably inferior to the PS3 one. 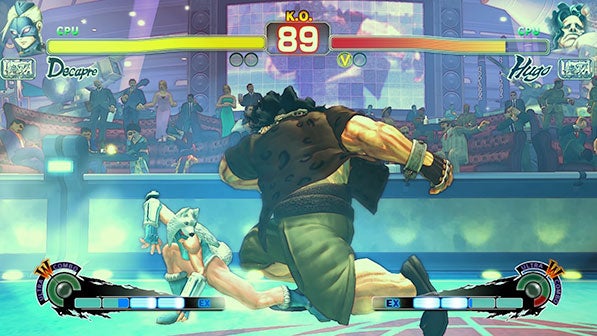 Online, the tiny lag between your button-press and your character’s action – which is particularly critical for a beat-em-up and was one of the few criticisms directed at the previous-gen versions of Ultra SFIV – is also unchanged, despite the fact that the game is running on much more powerful hardware. Some fairly major bugs have been reported by the online fraternity, including some visual glitching – which we weren’t afflicted by – and some sound glitching, which we did witness. Online sound levels, too, are annoyingly lower than offline ones.

The shoddiness of the port is rather a shame, since underneath it all, Ultra Street Fighter IV is an excellently conceived version of a great game. If you’re new to it, it added five new characters, all of which are distinctive in terms of personality and gameplay, and made tiny but effective tweaks to many existing characters – adjusting punch damages and the like. More major gameplay tweaks came in the form of delayed wake-up (giving you a chance to avoid walking back into another attack when your character has been floored) and ultra combo double, which lets you take two ultra combos into battle, but with the damage they wreak reduced.

The professional end of the Street Fighter fraternity gave those gameplay tweaks the thumbs-up – but has slated the PS4 port, which was due to be used for an upcoming tournament, but has been dropped in favour of the Xbox 360 version. 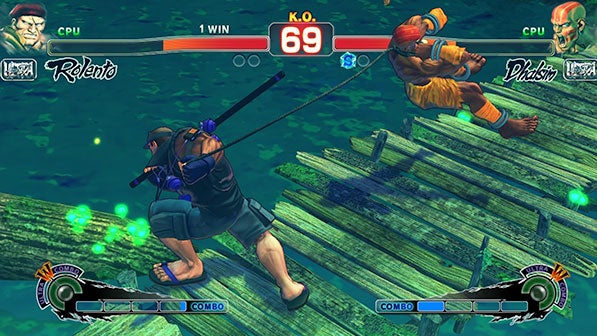 It’s not all bad news: the PS4 port does at least include all the downloadable content released since Ultra Street Fighter IV launched, include the Omega pack, which brings new moves to 44 of the characters. And it also supports PS3 fight-sticks, although in a somewhat kludged manner: any USB fight-stick has to be accompanied by one of the notoriously pricey DualShock 4 controllers, so if you want to use two sticks on one PS4, you’ll need two DualShock 4s.

Verdict
It’s true that if you own a PS4, played Street Fighter a while back and fancy returning to it, Ultra Street Fighter IV isn’t a bad purchase: it gives you a lot of gameplay for the money and, at a base level is great to play – or will be once updates have been disseminated which fix the more glaring bugs. But the game’s core audience is more or less guaranteed to own it already on PS3 or Xbox 360, and it would be well advised to stick to those versions of the game. Even in this day and age, it seems, porting is still a minefield.