You used to know where you were with console football games. EA made the beautiful game look beautiful, but we all knew that Pro Evo delivered the more convincing, fast-paced, fluid simulation. Suckers bought FIFA for the licensed teams, tournaments and players along with the eye candy. The smarter gamer bought Pro Evo because it was THE serious football game. What’s more, only the terminally dim or easily influenced would buy the special tournament specific games that came between proper FIFAs. After all, you were basically buying an awkward halfway house between next year’s game and last year’s, with a sizable portion of the content taken out. 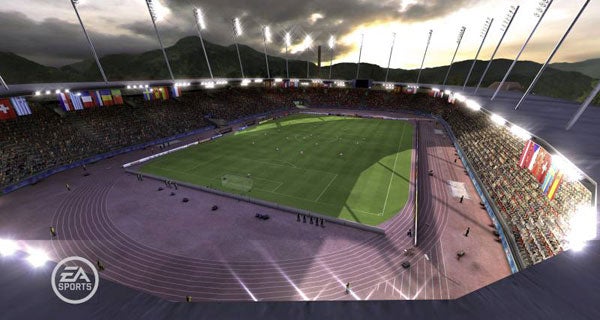 With FIFA 08, EA put paid to the first theory. While Pro Evo has struggled to make the most of a new HD console generation, EA finally managed to get blinding visuals and a cracking game together in one package, resulting in a FIFA that still had its own style of execution, but could just about stand up to Pro Evo on gameplay terms (although still nowhere near as fluid). Now EA looks set to do the same to the second. UEFA Euro 2008 isn’t quite essential, but it’s an excellent football game. 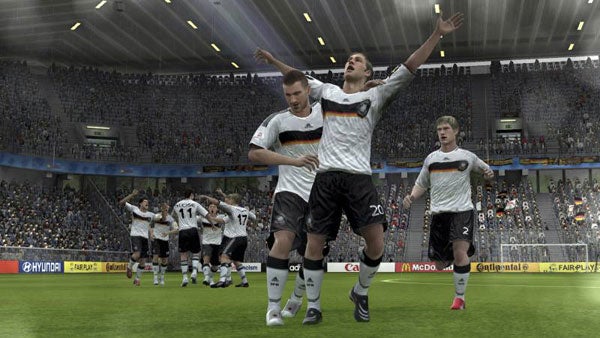 Visual enhancements are minor, though given the fantastic graphics of FIFA 08, that’s not really much of a criticism. Player likenesses still veer between the uncanny (John Terry, Wayne Rooney) and the merely weird (Steve McLaren) but even the dodgy ones are leagues ahead of any close-up work in the last Pro Evo. The animation, meanwhile, is just stunning. As Andy noted in his FIFA 08 review, you’ll be amazed at the amount of detail EA has gone into here, and at how incredibly it all flows together. Similarly, EA use focus effects and TV-style cut-ins (usually of a weeping manager) in a way that puts rival football games to shame. Despite the odd glitch on the PS3 version I reviewed (sometimes players arrive for a close-up a fraction of a second after the background loads) this is HD console football as you once hoped it would look. 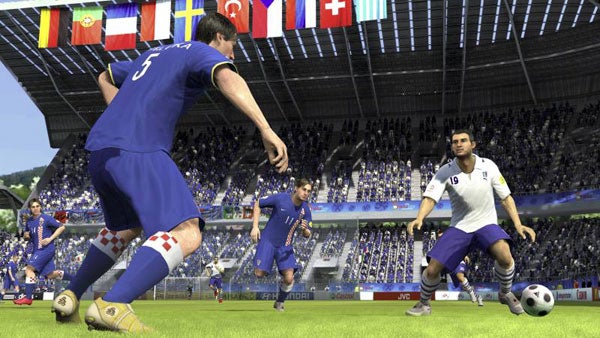 What improvements there are mainly connected to the new weather system. Any game with matches set in the Northern European winter needs a way of simulating the odd downpour, and the effect of heavy rain on clothes and skin in Euro 2008 is really quite impressive. What’s even more so, however, is how the water affects the pitch. Other games might have been content to stick a few muddy patches on the pitch, but in this one those patches actually affect the play, slowing down the ball and providing treacherous footing for the players. We’re still not talking the full on slip-slidey, mudbath experience of seventies league football, but you’ll appreciate the extra touch of realism.

The good news is that Euro 2008 takes the core gameplay set up by its predecessor even further in the right direction. There has been a subtle but noticeable boost in speed and pace, giving the game an even more fluid feel, and the combination of responsive controls and a sensible AI, both in terms of controlling the players and selecting the right one for you to manage on a minute by minute basis, makes this an even more enjoyable game. You still get the sense, as Andy noted, that challenges are weighted on the side of the challenger, making scoring a little too difficult when things get tight around the goal area, but otherwise everything works well. FIFA always felt second best to Pro Evo when it came to developing waves of movement up the pitch and culminating in a shot, but with Euro 2008 EA really does seem to have cracked it. If you’re used to Pro Evo then you’ll still find the pace a little slower and you’ll still find that close-quarters play lacks finesse. Fair enough, but that doesn’t stop Euro 2008 from being the most entertaining, accessible and free-flowing EA football game yet. 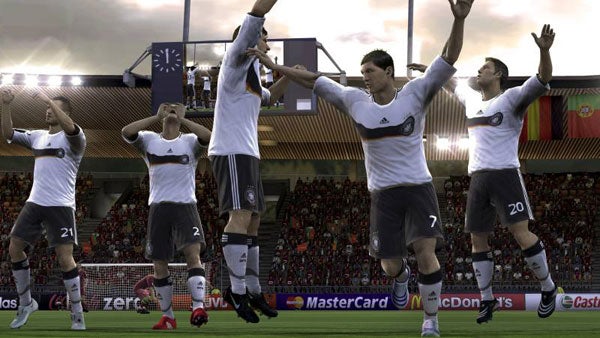 Of course, this doesn’t help if Euro 2008 is just a revised FIFA shorn of the majority of features, but in fact it’s anything but. Sure, the meat of the game remains the tournament itself, which you can play from the qualifying stages upwards (if you want the option of changing history for England) or just the finals themselves (if you’d rather just forget). You can also play one-off matches, either online or offline, and – in the special Story of Qualifying mode – work your way through a series of one-off scenarios that replicate key moments from the qualifying stages. The real treat, however, is Captain Your Country. 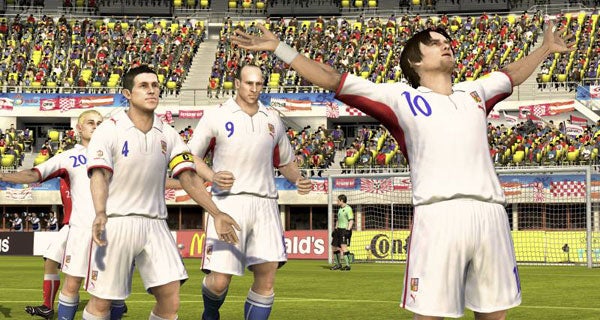 Captain Your Country is a development of FIFA 08’s Be a Pro mode. This was the mode where you played as a single player on your team, filling their role, supporting your team-mates and hoping for your moment of glory. It was a nice idea, but not fully exploited. Here it feels more like a fully realised concept. As a rising star in your country’s B team, it’s up to you to impress your manager by maintaining your position, helping to defend or build scoring opportunities and – every now and then – scoring a goal. In a way it’s counter-intuitive; we play games to be the star, not sit back and let an AI player grab the glory. Get used to it, though, and you’ll find it oddly satisfying, particularly if the coach promotes you to the A team for those all-important qualifying matches. One day you might even end up leading the team (though not if, as was often my case, you’re left out for being a ball-hog with a growing coloured card collection).

Captain Your Country works well because somehow it makes the experience more personal. In fact, you don’t have to stick with an existing player. You can design your own using a variation of EA’s established Gameface system, name him after yourself and – if your surname is one of the 200 odd built into the game’s list- find yourself on the commentary track. It’s the stuff that some young men’s dreams are made of, and when you do get that second in the scoring spotlight, the new interactive celebrations (waggle sticks and pummel buttons for all you’re worth) makes the triumph all the sweeter. 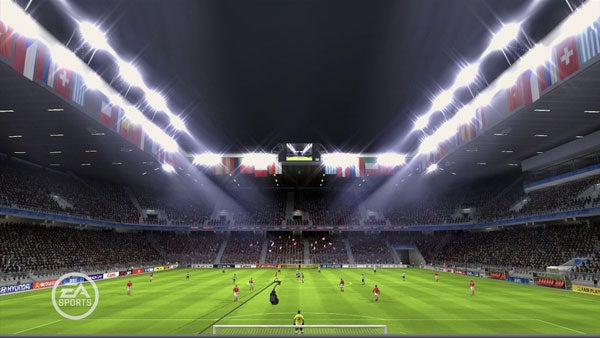 It’s this sort of atmospheric touch that makes Euro 2008 feel like more than just another cash-cow for EA’s football brand. The match atmosphere is superb, and enriched by an exemplary commentary from Clive Tyldesley and Andy Townshend that captures not just the mood of the current game, but your current fortunes in the qualifiers or tournament as a whole. Combine this with great crowd noise and you don’t just have a string of matches – you have a story. In fact, as you play you’ll even see flashes of the ongoing results of other matches, giving you that little extra impetus to raise your game when the group standings are beginning to look bad for you. 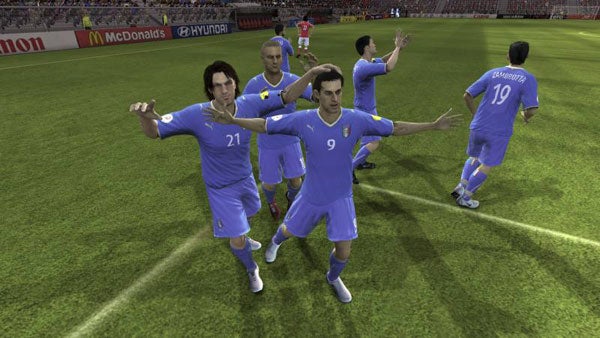 Finally, I know that some of you won’t want to buy this for the simple reason that a European competition without England isn’t a European competition you’re interested in playing. Snap out of it. Before and during the event itself EA is running what it calls a Battle of the Nations competition, where you sign up for a country and every goal or victory, online or offline, will be added to your nation’s running total. The country with the highest score at the end of the tournament will be crowned as the winning Euro 2008 nation. Is this a cynical attempt to harness nationalistic tendencies to the ends of commerce? Almost certainly. Does it fill you with a desire to do your patriotic duty? You bet. 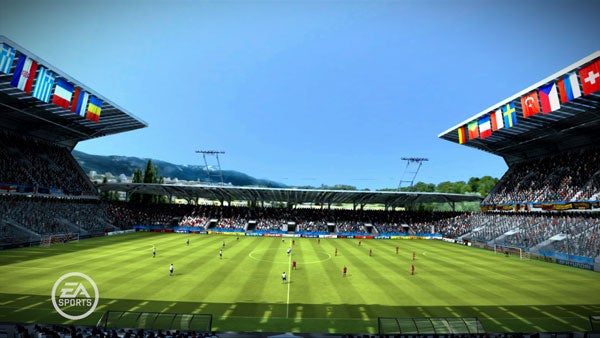 So there you have it. UEFA Euro 2008 is the one FIFA summer fill-in in living memory that is actually worth buying. The question is whether it’s worth buying if you already have FIFA 08? Well, it does play a slightly better game of football and Captain Your Country is fun, so if you’re mad keen on your footie and you’re not too hung up on the Premiership or club football, the answer is a ‘yes.’ On the downside, you just know that most of the enhancements here will be rolled into the inevitable FIFA 09, and that this will be the more fully featured game. This may be reason enough to wait ’til that arrives, but if you can’t wait and you buy Euro 2008 right now it’s unlikely that you’ll regret it.


More than just a cut-down special edition of FIFA 08, Euro 2008 takes EA’s football franchise to new heights. The only reason to avoid it is if you already have the last FIFA and you’d rather wait for these enhancements to be rolled into the next.